A critical player for the United States, NATO and a few Western allies, the Boeing E-3 Sentry continues service in the vital AWACs role.

Authored By: Staff Writer | Last Edited: 04/26/2022 | Content ©www.MilitaryFactory.com | The following text is exclusive to this site. 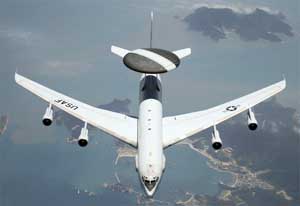 From 1954 into 1982, the United States military relied on the EC-121 "Warning Star" platform as its primary Airborne Early Warning (AEW) system. AEW aircraft were developed to provide battlespace command and direction for allied forces through the tracking of all presented aircraft, ground vehicles and naval assets. This sort of management proved ultra-critical in the evolving age of electronics and processing which saw an elevated reliance on all manner of scanning, tracking and detection. Aircraft like the EC-121, therefore, served as "directors" to oversee a given battlefield from lofty positions in the sky. The Warning Star series, based on Lockheed's "Constellation" line, fulfilled this requirement and was produced across 232 examples, largely remembered for their triple-fin tails and hump back fuselage spines. These aircraft served throughout the Vietnam War (1955-1975) and were popularly known by their nickname of "Connie", of course born of the original Constellation name.

Into the 1960s, the United States Air Force (USAF) was already planning for a new AEW platform with much improved battlespace capabilities and would serve as a direct successor to the EC-121 line. Turbofan jet technology now allowed for larger aircraft to fly farther and higher than previous and the Boeing 707 was formally selected as the "carrier" for a powerfully advanced radar system. Two systems were then trialled on two Boeing 707 airframes - one radar from Westinghouse and the other from competing Hughes. The Westinghouse design was officially selected and the resulting aircraft became the E-3 "Sentry". Sixty-eight E-3s were produced from 1977 into 1992. The modern E-3 is given the descriptor of "Airborne Early Warning and Control" (AEW&C) to which the common term of "AWACs" is derived.

Beyond the USAF's usage of the type, the aircraft was also sold to NATO, the British Royal Air Force (RAF), the French Air Force and Saudi Arabia. After the United States, NATO became the largest operator with eighteen airframes in its stable.

Structurally, the E-3 retains much of the appearance of the civilian-minded Boeing 707 model. It sports low-mounted, swept monoplane wings in a traditional configuration at amidships. The cockpit flight deck is at the extreme front of the tubular fuselage aft of a short nosecone assembly. The fuselage houses the mission crew and their applicable system consoles. The empennage includes a single vertical tail fin and low-mounted horizontal planes. The undercarriage is entirely retractable an consists of two four-wheeled main landing gear legs and a two-wheeled nose led. The most distinct feature of the design is the rotating radar assembly seated atop a strut support network aft of the main wing span and ahead of the tail unit. The radar plate turns at a rate of six revolutions per minute. Dimensions of the entire aircraft include a length of 152 feet, 11 inches, a wingspan of 145 feet, 9 inches and a height of 41 feet, 4 inches. Listed weights include 185,000 when empty and 347,000lb as a Maximum Take-Off Weight (MTOW).©MilitaryFactory.com
Advertisements

The E-3 was born from the original "EX-137D" prototype of which two were constructed to evaluate the competing radar installations. These were powered by 4 x Pratt & Whitney T3D series jet engines (the same as found on the Boeing B-52H "Stratofortress" and Lockheed C-131 "Starlifter"). The initial production mark was the E-3A and powered by Pratt & Whitney TF33 series jet engines and outfitted with the AN/APY-1 series radar suite. Twenty-four were produced. The E-3B was an improved form of which 24 were converted to the new standard from existing E-3A models. The E-3C was outfitted with the more powerful AN/APY-2 radar system and added crew control stations. Ten of the type were produced with nine born from an original E-3B order for 34 B-model aircraft. One E-3C was used as the "JE-3C" for testing by Boeing. E-3D and E-3F were foreign export marks - the former to the RAF and the latter to the French Air Force. The D-model incorporated CFM56 series engines and were designated "Sentry AEW.1" for RAF service. F-models to the French Air Force were similarly powered though outfitted with French-required systems. The British received seven aircraft to the French's four. Saudi E-3's are represented through five E-3A models and a further eight KE-3A used in the aerial tanker role.

As an interesting aside, Iran had ordered some ten E-3 Sentry aircraft for its revamped air force, however, the 1979 Revolution terminated any possibility of a sale from the United States to the Islamic nation.

The most recent E-3 Sentry production mark is the "E-3G" which brings about major improvements through the Block 40/45 initiative. The initiative - currently (2013) under testing with Boeing - will upgrade avionics and mission performance capabilities as well as onboard electronics. A further proposed upgrade could see the old-style cockpit replaced with a more modern design including an "all-glass" approach now common to current- and next-generation aircraft.

The primary USAF/NATO E-3 includes a flight crew of four personnel with 13 to 19 mission crew added. These aircraft are powered by 4 x Pratt & Whitney TF33-PW-100A turbofan engines, each delivering 21,500lbs of thrust. Maximum speed is 530 miles per hour with a range out to 4,000 nautical miles while operating at service ceilings nearing 41,000 feet. The aircraft has a mission endurance time of eight hours which is crucial to an ongoing military campaign. It can be refueled from USAF KC-135 Stratotankers and similar for much-improved operational ranges and mission endurance times.

The E-3 has served an active operational service life since its inception. Its baptism of fire occurred during the 1990 coalition deployment to the Persian Gulf region during Operation Desert Shield. Their capabilities were put to the ultimate test in 1991's Operation Desert Storm which saw the quick and methodical destruction of Saddam Hussein's Iraqi Air Force (followed by its highly vaunted Army). E-3's recorded 379 sorties during the air war and ground phase that followed. Since then, the type has served well across more modern engagements including the recent NATO involvement during the 2011 Libyan Civil War - keeping the Libyan Air Force and Army at bay.©MilitaryFactory.com
Note: The above text is EXCLUSIVE to the site www.MilitaryFactory.com. It is the product of many hours of research and work made possible with the help of contributors, veterans, insiders, and topic specialists. If you happen upon this text anywhere else on the internet or in print, please let us know at MilitaryFactory AT gmail DOT com so that we may take appropriate action against the offender / offending site and continue to protect this original work.

July 2017 - Boeing has won a contract to upgrade the French fleet of E-3 Sentry aircraft. The upgrades (digital glass cockpits, updated navigation and airspace equipment) will follow those already being applied to both United States Air Force and NATO Sentry aircraft. The work will span from 2019 into 2024 on French soil (Air France).

January 2020 - The British Royal Air Force (RAF) has returned one of its E-3D platforms for permanent storage in the United States.

January 2021 - The British Ministry of Defense (MoD) is selling off two of its retired E-3D Sentry aircraft for scrapping.

August 2021 - The British Royal Air Force has ended operations involving their fleet of aging E-3D "Sentry" platforms. The service spans some thirty total years. Beginning in 2023, the gap will be filled by the fleet of three-strong E-7A "Wedgetail" (Boeing 737) type.

September 2021 - The USAF is eying the purchase of the E-7 Wedgetail AWACs platform to succeed an aging line of E-3 Sentry platforms in same role.

February 2022 - Britain has announced it is selling an unspecified number of former Royal Air Force (RAF) E-3D Sentry platforms to the nation of Chile.

April 2022 - The USAF has committed to the purchase of the E-7A Wedgetail to fulfill its AWACS requirement and succeed an aging line of Boeing E-3 Sentrys in same role. The initial service-centric prototype is expected in 2027.

(Showcased performance specifications pertain to the Boeing E-3C Sentry (AWACS) production variant. Compare this aircraft entry against any other in our database or View aircraft by powerplant type)
None. Mission equipment carried for battlespace direction. 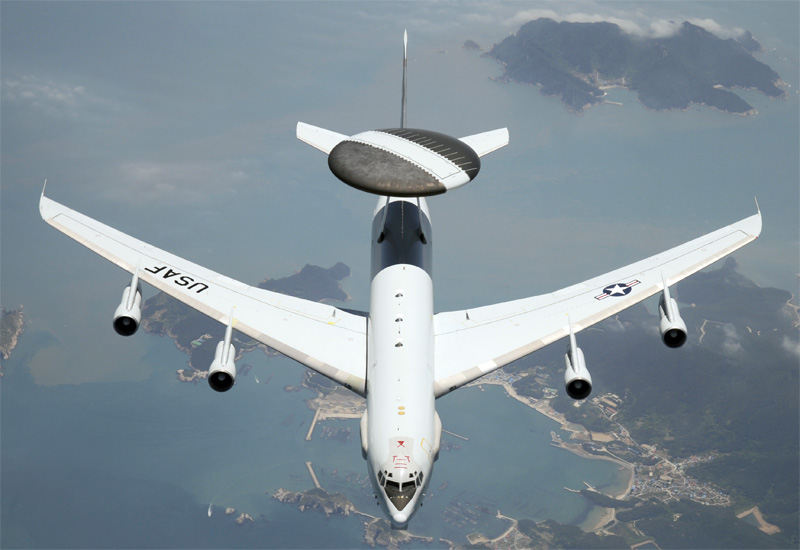 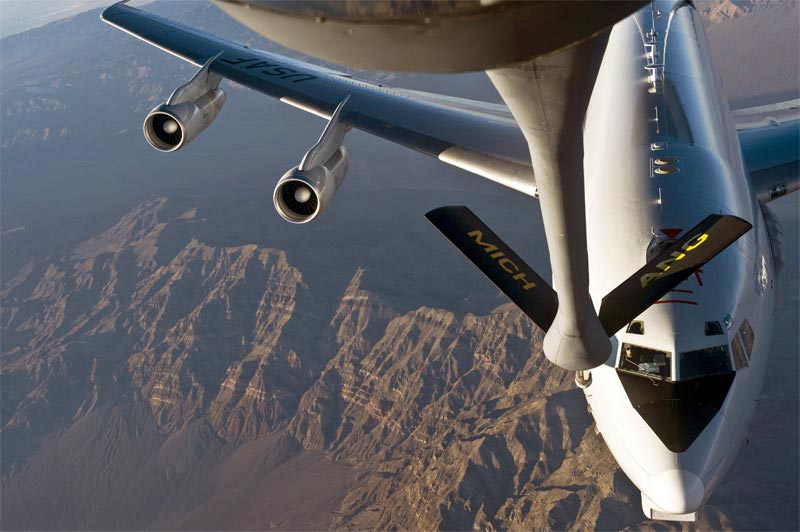 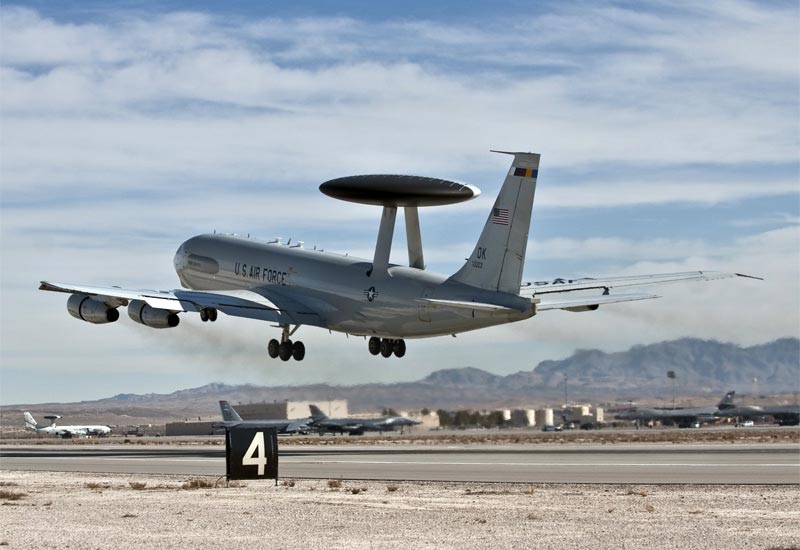 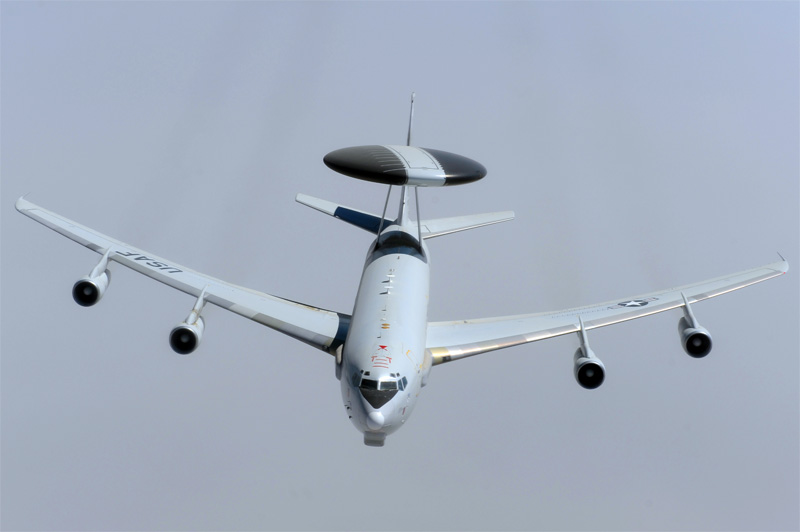 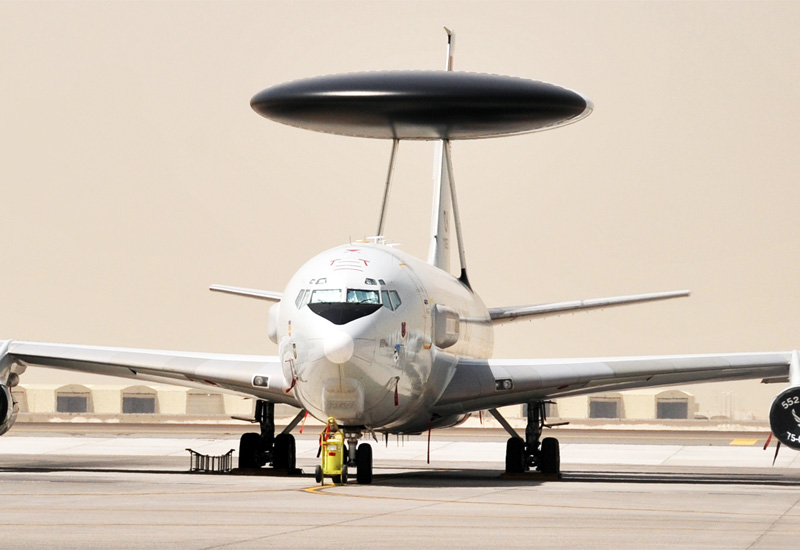 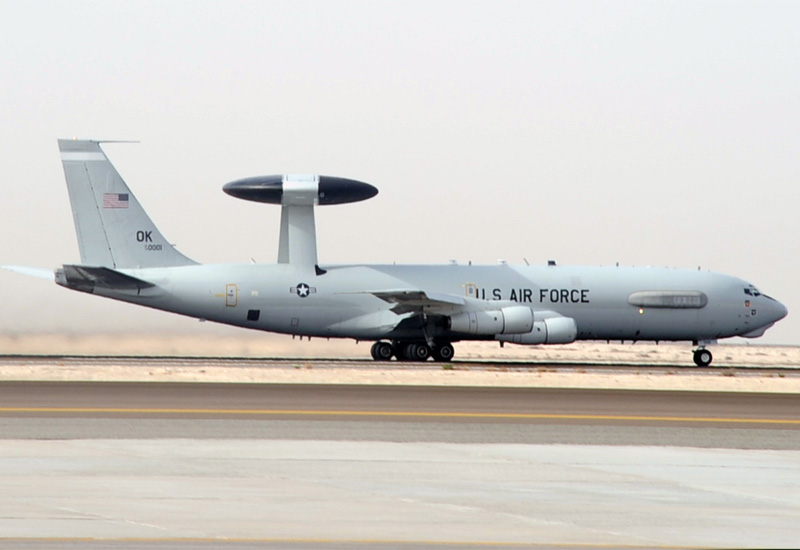