Authored By: Staff Writer | Last Edited: 05/10/2019 | Content ©www.MilitaryFactory.com | The following text is exclusive to this site. 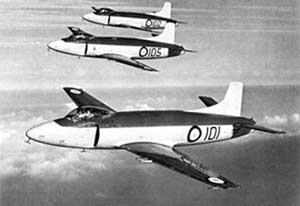 By the time of the 1950s, Supermarine had been a longtime contributor to the various British air arms, the Royal Air Force (RAF) and Royal Navy (RN). With the close of World War 2 in 1945, the company followed others into the realm of turbojet-powered forms and went on to deliver several more notable products of which one entry became the short-lived Supermarine "Attacker", a compact single-seat, single-engine design. This carrier-borne fighter went on to see truncated service during the early Cold War period under the flags of the British Royal Navy and Royal Naval Volunteer Reserve forces as well as the Pakistan Air Force where it went on to be retired in 1954, 1957, and 1964, respectively. Total production, including three contracted prototypes, reached 185 examples before the end.

The Attacker has the distinction of becoming the Royal Navy's first jet-powered frontline fighter.

The fighter was born out of Specification E.10/44 written up back during the fighting of World War 2 (1939-1945) in 1944 when it seemed that the prop-driven fighter was reaching its absolute pinnacle and the turbojet was the way of the future concerning combat aircraft. The requirement was for an experimental form to test out the capabilities of the new Rolls-Royce "Nene" turbojet engine. This entry was formed from the work begun with the Supermarine "Spiteful", a high-performance prop-driven fighter prototype considered during the later stages of the war (just nineteen being built). The straight-lined, laminar-flow wings of the Spiteful drove the design lines of the soon-to-be "Attacker" - resulting in the new aircraft being known, at least for a time, as the "Jet Spiteful".

The Jet Spiteful was accepted for further development against insurance for the upcoming Gloster "Meteor" fighter (detailed elsewhere on this site) which was also to rely on the Nene turbojet for its source of propulsion. To secure the work, the British Air Ministry contracted with Supermarine for three complete, flyable prototypes to move the Jet Spiteful program along. This work order arrived in August of 1944 while the outcome of World War 2 still largely in doubt. The aircraft was to stock the inventories of both the RAF and the RN with the first prototype set aside to be built under an RAF standard (i.e. land-based) and the subsequent models serving the development program for a navalized form to be operated from existing British carriers.

A follow-up contract then covered twenty-four pre-production vehicles split between the two services and this arrived in July of 1945 - by which point the war in Europe was over (May 1945).

The Jet Spiteful was to have been a critical stepping stone for British airmen as it represented one of the earliest available forms to be powered by jet technology - which required airmen to understand the nuances of higher-speed flight. However, issues in development of the prototypes, which in turn led to program delays, meant that the RAF quickly moved on from the Jet Spiteful / Attacker, leaving the Royal Navy to continue in its pursuit of its first jet-powered fighter. The RAF eventually settled on eighteen de Havilland "Vampire" jet fighters as these aircraft were "ready-to-go".

The resulting aircraft became a strange mix of aviation eras, utilizing the straight wings and "tail-dragger" undercarriage of the earlier Spiteful prop-driven fighter. These mainplanes were situated ahead of midships, as was common in the old monoplanes of World War 2, and a conventional single-finned tail unit was installed at the rear of the fuselage (with low-set, aft-mounted horizontal planes). In addition to the mainplanes, all of the presented tail surfaces relied on straight lines with no sweep to be found. The turbojet engine was buried within the fuselage in the usual way, aspirated by half-moon intakes straddling the cockpit and exhausting through a singular port under the tail. The pilot sat under a framed canopy near the nose, which was short and conical in shape. Each wing member carried 2 x 20mm Hispano Mark V No.3 autocannons as standard armament.

As a naval fighter charged with operating from space-strapped British carriers, the "Attacker" had limited-range "wing-folding" near its wingtips for improved storage. Additionally, its undercarriage and structure were reinforced for the rigors of carrier operations and a tail hook was seated just under the tail.
Advertisements

In its short time aboard Royal Navy carriers, the Attacker proved itself solid if unspectacular. There was the glaring issue of its "nose-up" attitude which played poorly in terms of pilot vision - a failing of World War 2-era fighter aircraft. This limited vision during deck-running actions as well as the all-critical action of landing. The jet-powered nature of the aircraft, coupled with the nose-up attitude, also excluded it from being operated from soft-ground airfields as a land-based fighter and its overall performance was generally lacking when compared to the fastest prop-driven fighters of the late-war era. This led to the Royal Navy abandoning the Attacker as its frontline offering as soon as 1954.

The Attacker entered service as the Attacker F.1 and this was based in the Type 398 prototype. Fifty were built to the standard with the final eleven being completed as fighter-bombers, handed the designation of "FB.1" as a result. These particular aircraft were given provision for aerial rockets and conventional drop bombs at hard points situated under each wing. The FB.1's upgraded form arrived in the "Attack FB.2" which now moved on to the Rolls-Royce Nene 102 series turbojet engine offering slightly better performance - 84 were built to this standard.

As completed, the Attacker F.1 held a crew of one and its structure was given a running length of 37.5 feet, a wingspan of 36.10 feet, and a height of 9.10 feet. Empty weight reached 8,435lb against an MTOW of 12,215. Power was supplied by the single Rolls-Royce Nene turbojet engine offering 5,000lb of thrust. This allowed for a maximum speed of 590 miles-per-hour with a range out to 590 miles, a service ceiling up to 45,000 feet, and a rate-of-climb nearing 6,350 feet-per-minute. Standard armament was 4 x 20mm Hispano No.3 Mark V automatic cannons fitted in pairs at the leading edges of each wing mainplane.

The final Attacker entry became the thirty-six "Type 538" models built for, and sold to, the Pakistan Air Force in 1953. These were powered by the "Nene 4" turbojet engine and operated solely as land-based fighter-bombers from prepared airfields.

Eventually, a swept-wing form of the Attacker appeared, this as the "Type 510", and this model was ultimately evolved to become the Supermarine "Swift" jet-powered fighter for the RAF. This aircraft is detailed elsewhere on this site.

For the British, the Attacker ultimately stocked the inventories of no more than four FAA squadrons (of which one was set up as a dedicated training force). Five Royal Naval Volunteer Reserve squadrons then equipped with the type . In Pakistan, the Attacker operated with No.11 "Arrows" squadron for its time in the air.
Advertisements

(Showcased performance specifications pertain to the base Supermarine Attacker production variant. Compare this aircraft entry against any other in our database or View aircraft by powerplant type)
FIGHTER:
4 x 20mm Hispano No.3 Mark 5 internal automatic cannons.

General Assessment
Firepower
Performance
Survivability
Versatility
Impact
Values are derrived from a variety of categories related to the design, overall function, and historical influence of this aircraft in aviation history.
Overall Rating
The overall rating takes into account over 60 individual factors related to this aircraft entry.
60
Rating is out of a possible 100 points.
Relative Maximum Speed
Hi: 750mph
Lo: 375mph
This entry's maximum listed speed (590mph). 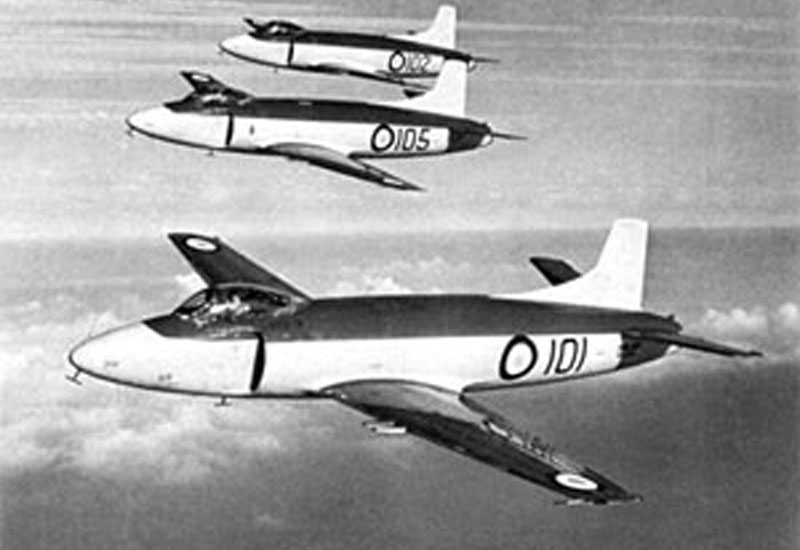 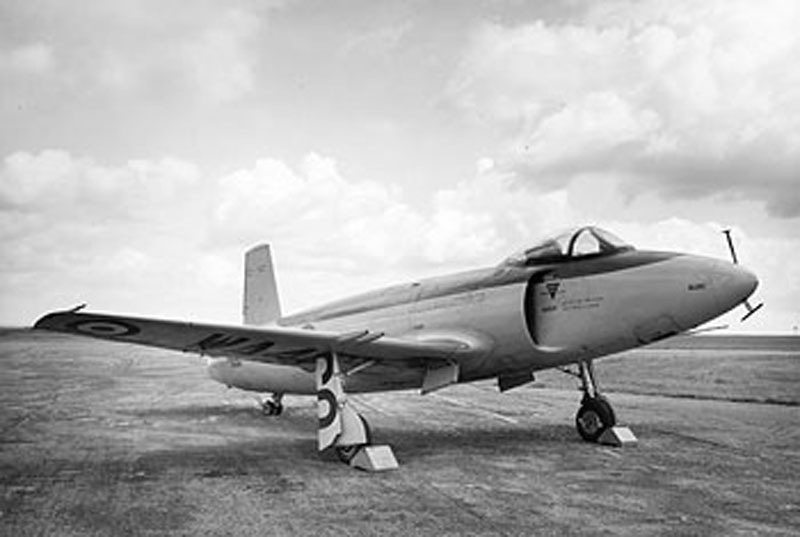 Left side view of a Supermarine Attacker in flight
4 / 5

Right side view of the Supermarine Attacker at rest
5 / 5 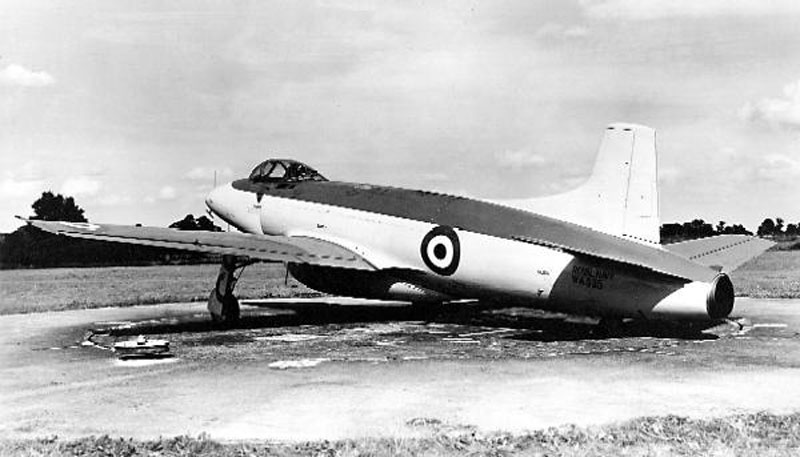 Rear left side view of the Supermarine Attacker on display
❮ ❯