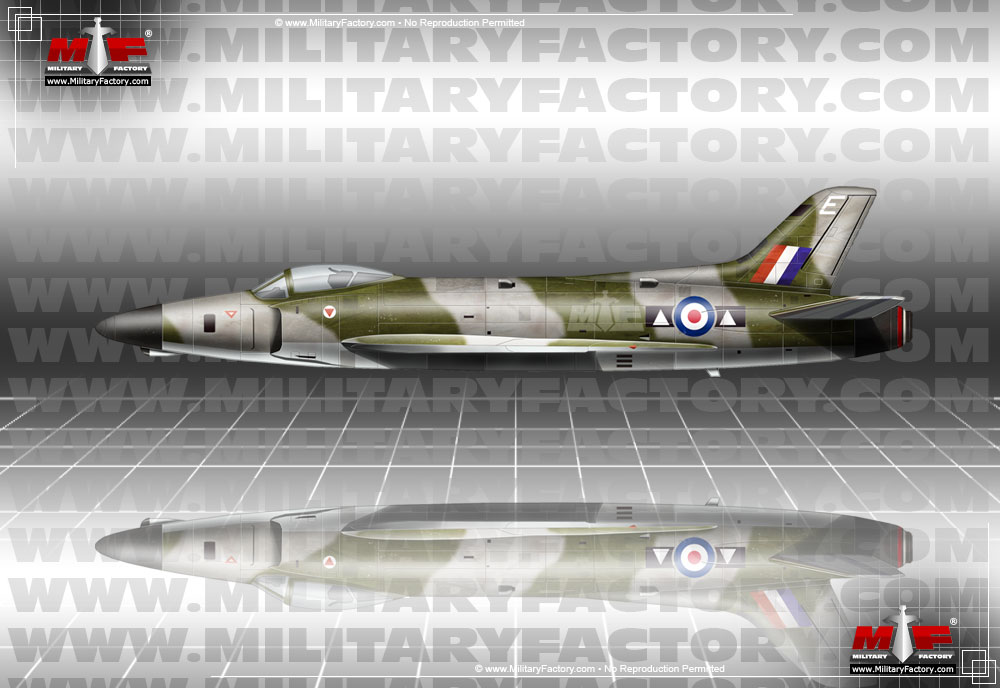 The Supermarine Swift never lived up to its lofty expectations, limited to fewer than 200 production units and a short service life.

Authored By: Staff Writer | Last Edited: 05/07/2019 | Content ©www.MilitaryFactory.com | The following text is exclusive to this site.
Supermarine's earlier straight-winged, single-seat, single-engined "Attacker" platform - intended for both the British Royal Air Force and Royal Navy services - was not an outright success. The RAF eventually passed on it during development and the Royal Navy accepted it into service as its first jet-powered frontline fighter. Its limitations were many - lackluster performance, poor pilot vision out-of-the-cockpit, straight-winged mainplanes, and "tail-dragger" undercarriage arrangement to name a few.

This led company engineers to propose a swept-winged version of the Attacker, born as the "Type 510", and, this time around, the aircraft was given sweep back along all of its winged surfaces (including the tail). The aircraft was accepted into RAF service as the "Swift" but, like the Attacker before it, the Swift was only kept in service for a relatively short period due to design flaws and performance limitations. It was introduced in 1954 and given up as soon as the 1960s after which some 197 examples had been built.

The Swift continued the major design lines of the earlier Attacker in that it seated a sole crewman under a framed canopy towards the short nosecone, carried a single engine installation, and sported twin half-moon intakes near the cockpit and a single exhaust port at rear. Key changes included the aforementioned wing sweep as well as a more conventional tricycle undercarriage to help improve pilot vision during ground-running, take-off, and landing actions. The 4 x 20mm autocannon armament of the Attacker was given up in favor of 2 x 30mm ADEN autocannons and provision was had, from the outset, for rockets and drop bombs. Despite the selection of the narrower Rolls-Royce AJ.65 ("Avon") turbojet engine, the oversized fuselage of the Attacker was retained.

The Swift was born out of a requirement to find a successor for the soon-to-be-outmoded Gloster "Meteor" which had begun making the rounds as the first British jet-powered fighter back in mid-1944 - as World War 2 (1939-1945) raged on. However, not only was the turbojet engine the way of the "fighter future" but swept-winged designs were now sure to overtake straight-winged forms like the Meteor in time. This was further driven home by the British experience in the Korean War (1950-1953) which saw the arrival of the Soviet Mikoyan-Gurevich MiG-15 "Fagot" single-seat, single-engine fighter and its advanced swept-back wing design.

As the Attacker was signed on to become insurance for the Gloster Meteor, the Swift also became an insurance blanket for a design being championed by Hawker Aircraft, this to become the classic Hawker "Hunter" (detailed elsewhere on this site).

Two prototypes covering the Swift program were ultimately constructed and a first-flight of one was recorded on December 29th, 1948 (as "Type 510"). Because of the desperate need, the aircraft was fast-tracked towards production, but hampered somewhat by technological hurdles to be overcome in designing such an advanced combat aircraft. A first-flight of a production-quality form was not had until August 25th, 1952.

Ultimately, eighteen aircraft were accepted through the "Swift F.Mk.1" production standard and these were introduced in 1954 with RAF Squadron No.56. The aircraft carried the RR "Avon 109" series turbojet of 7,500lb thrust as well as 2 x 30mm ADEN internal cannons as standard armament. The variant exhibited both engine and handling issues and three of the first fourteen aircraft were lost in fatal accidents. This led to the RAF acceptance of sixteen "Swift F.Mk.2" fighter-interceptor aircraft carrying revised wing leading edges and adding two ADEN cannons to the wings - improving both controlling and firepower, respectively.
Twenty-five "Swift F.Mk.3" production models then followed and these switched to the RR "Avon 114" series turbojet which offered an afterburning capability for improved straight-line speeds. However, these were relegated to jet airmen training and never saw formal frontline operational service with the RAF. The F.Mk.4 attempted to continue rectifying issues in the Swift's design, adding a variable-incidence tail for better handling but engine limitations continued to plague the series. This entry proved to be the last Swift accepted into RAF service under the guise of fighter-interceptor - the focus now turned to modifying the Swift to the tactical reconnaissance role.

The low-level, reconnaissance-minded "Swift F.Mk.5" of 1955 added a lengthened nosecone to house camera and recording equipment and dropped two of the four 30mm ADEN cannons. These were introduced into service in 1956 and marked the last major version of the Swift to be taken into formal RAF service. The aircraft had a running length of 42.2 feet, a wingspan of 32.3 feet, and a height of 13.1 feet. Empty weight reached 13,45lb against an MTOW of 21,675lb and power from the Avon RA.7R/114 turbojet engine was 7,175lb of thrust dry and up to 9,450lb of thrust with reheat (afterburner). Maximum speed reached 715 miles-per-hour with a range out to 630 miles, a service ceiling of 45,800 feet, and a rate-of-climb of 14,660 feet-per-minute. Standard armament was 2 x 30mm ADEN cannons as well as provision for conventional drop bombs and aerial rockets.

The "Swift PR.Mk.6" became an unarmed reconnaissance form while the follow-up "Swift F.Mk.7" added a limited air-to-air missile capability as well as a switch to an uprated Avon turbojet engine. Fourteen F.Mk.7 standard fighters were built but retained solely for testing purposes.

In time, the key inherent limitations with the Swift line meant that the competing Hawker Hunter made for a better overall solution in the short-term/long-term. Indeed, the Hunter took on the same roles the Swift attempted and did so satisfactorily. With fewer than 200 Swifts completed, the type was abandoned from frontline service as soon as 1961 (Fighter Command moved on from it back in May of 1955), the series retired in full by 1967. Because of its many issues and poor flight record, it was never a candidate for exportation and only stocked four total RAF squadrons. A few have been preserved as museum pieces.

One last attempt to extract a high-performance, naval-minded supersonic fighter was made through development of the "Type 545" but this endeavor ended as a single prototype - detailed elsewhere on this site.

Values are derrived from a variety of categories related to the design, overall function, and historical influence of this aircraft in aviation history.
Overall Rating
The overall rating takes into account over 60 individual factors related to this aircraft entry.
64
Rating is out of a possible 100 points.
Relative Maximum Speed
Hi: 750mph
Lo: 375mph
This entry's maximum listed speed (713mph).