As with other Cold War-era Chinese military products, the Harbin Z-5 was nothing more than a copy of an existing Soviet design - in this case, the Mil Mi-4 series. 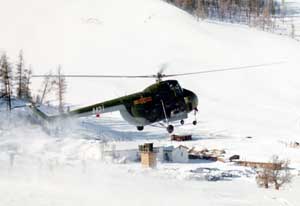 One-time close political ties between the Soviet Union and China allowed for the passing of military goods to the latter. While this included the basic tanks, armored vehicles and small arms, it also included airpower in the form of interceptors, bombers and helicopters. One such product passed into China hands was the Mil Mi-4 series transport / utility helicopter to be produced locally, under license, from available blueprints. The Mi-4 would therefore become the Harbin Z-5 in the Chinese inventory. Between 545 and 575 examples were produced under the Harbin Aircraft Manufacturing Corporation label. However, political relations between the two communist nations eventually soured, leading to the Sino-Soviet Split of 1960-1989.

The original Mi-4 went airborne in prototype form on June 3rd, 1952 and was introduced into Soviet Air Force service in 1953. From the period of 1951 to 1979, over 3,500 of the type were produced. There proved many global recipients of the type including Afghanistan, Bulgaria, Cambodia, Cuba, Czechoslovakia, East Germany, Egypt, Finland, Iraq and Poland covering much of Asia and portions of the Pacific and Africa. The helicopter was conventional in its rotary-wing approach, fitted with a single Shvetsov ASh-82V radial piston engine outputting at 1,675 horsepower. Its outward design was noticeably distinct with a high-mounted fight deck, rounded nose cone assembly and low-set passenger cabin. The empennage was high-mounted with an internal shaft running from the fuselage to the tail to power the tail rotor seated on a small fin. The undercarriage was fixed with four legs - two forward on the fuselage and two set rearwards. The frontal legs featured positional wheels. Production was undertaken by the Mil Moscow Helicopter Plant.

The Chinese Z-5 prototype was completed and achieved its first flight on December 14th, 1959. Developmental delays saw to it that quantitative serial production did not begin until 1964 and it was only then that the Z-5 was formally adopted by the Chinese Army, Navy and Air Force. The Z-5 was an unarmed basic transport with utility cargo-handling as secondary. The Chinese variant also cut into possible Soviet foreign sales of their Mi-4 as the Z-5 was also successfully offered to Chinese-allied customers - mainly Albania with 40 examples and North Korea with 50 examples. Overall, the Z-5 design remained faithful to the original Soviet offering and, externally, were essentially identical.

In 1966 - with the worldwide shift to turboshaft-engined helicopters - Harbin began work on a turboshaft-powered variant (Wozhou-5) of the Z-5 recognized as the Harbin Z-6. This endeavor was then passed onto the now-established Helicopter Design Research Institute which produced a viable prototype for testing, first flight being achieved on December 15th, 1969. With the fatal loss of one prototype and production shifting to other locations, the program suffered through a long period of delays including the upheaval forming from the "Cultural Revolution". The program was eventually given up for good with just eleven vehicles completed.

While outmoded and severely ages, Z-5 helicopters of the Chinese military are thought to still be retained in reserve status. However, their capabilities are limited on the modern battlefield and would most likely not be brought into battle unless absolutely required. As with other utility types, the Z-5 could be basically armed, primarily with machine guns, machine gun pods and lightweight rocket pods or launch rails - helping to broaden the tactical flexibility of the system to an extent, becoming an armed transport or dedicated gunship.
Advertisements

Albania; China; North Korea
(OPERATORS list includes past, present, and future operators when applicable)
✓ Ground Attack (Bombing, Strafing)
Ability to conduct aerial bombing of ground targets by way of (but not limited to) guns, bombs, missiles, rockets, and the like. ✓ Close-Air Support (CAS)
Developed to operate in close proximity to active ground elements by way of a broad array of air-to-ground ordnance and munitions options. ✓ Transport
General transport functionality to move supplies/cargo or personnel (including wounded and VIP) over range. ✓ Special Forces
Serving Special Forces / Special Operations elements and missions.

(Showcased performance specifications pertain to the base Harbin Z-5 production variant. Compare this aircraft entry against any other in our database or View aircraft by powerplant type)
Usually none. Could be armed with machine guns, machine gun pods, rocked pods or launch rails for use as an ad hoc gunship or armed transport.

(Not all ordnance types may be represented in the showcase above)
Z-5 - Base Series Designation
Z-6 - Proposed turboshaft-engined Z-5; 11 examples produced.
Xuanfeng - Civilian Market Passenger Transport 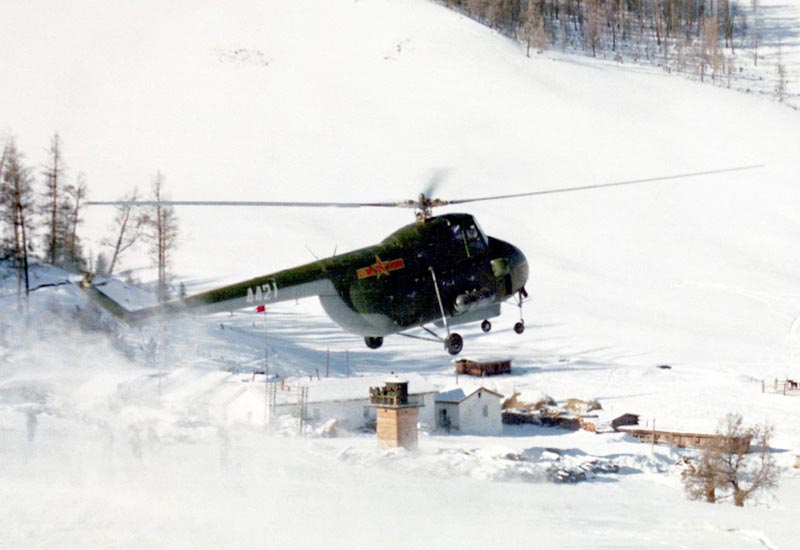