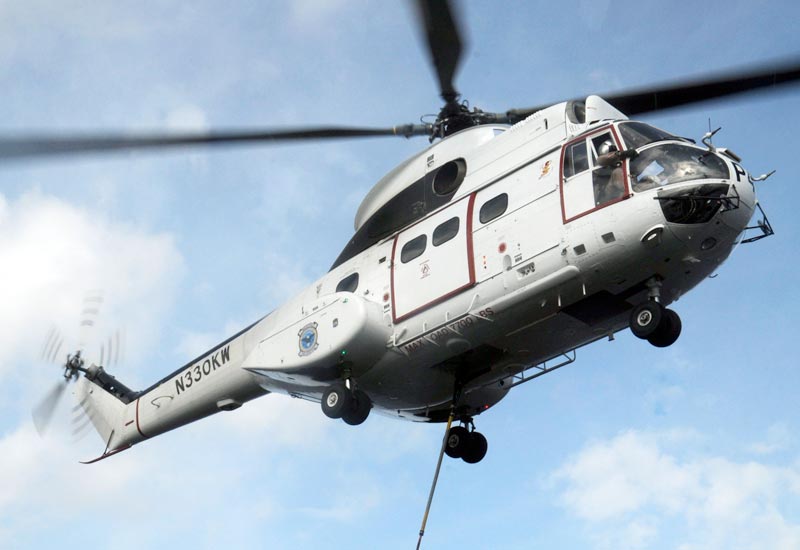 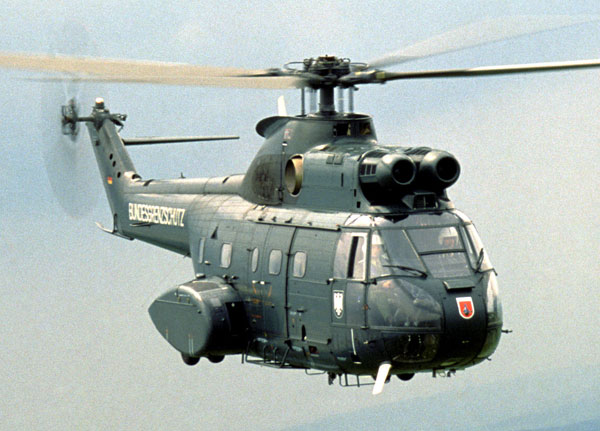 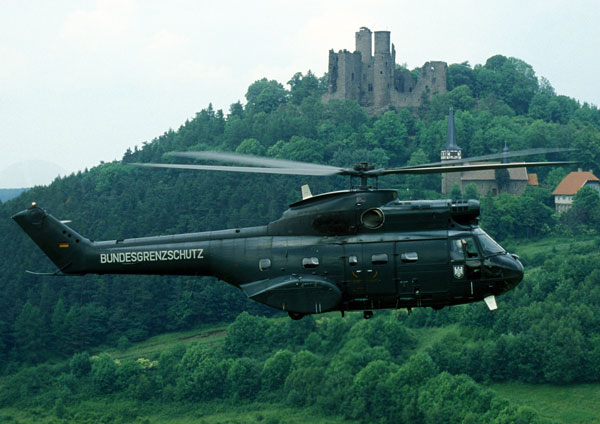 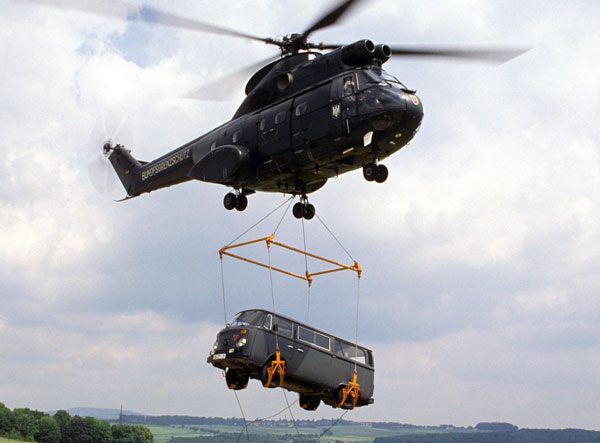 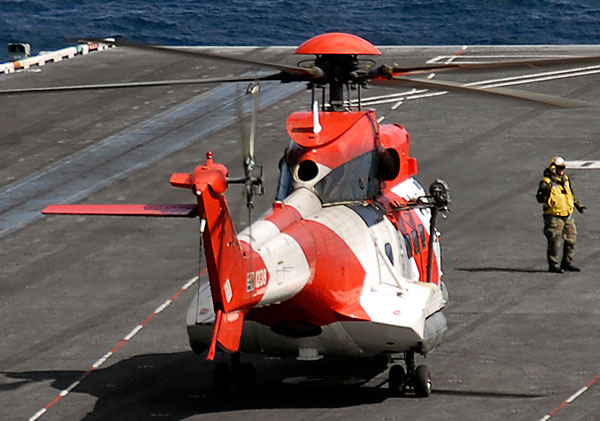 The SA 330 Puma helicopter has gone into operational service with no fewer than 40 military forces worldwide.

The Puma began life as a product of Sud Aviation designed to meet an French Army requirement for an all-weather, medium-lift, multi-purpose utility helicopter to replace the aging set of Sikorsky S-58 systems in French service. Additional requirements stipulated operation in day or night environments with potential operations of the type reaching virtually in any region of the world. Though originally designed and produced under the Sud Aviation banner (hence the "SA" in the model designation), ownership of the helicopter changed hands when Sud merged with SEREB and Nord Aviation becoming Aerospatiale.

Two prototypes were constructed under the designation of Alouette V (SA 330A) with the first one flying on April 15th, 1965 from Marignane. These designs were based in the Super Frelon helicopters though the SA 330 was modernized through-and-through right down to construction methods utilized. The prototypes were subsequently followed by 6 pre-production aircraft which were evaluated into the middle of 1968. Results proved the design to be sound, showcasing good speed and agility and proving to be reliable for a complex system of this type. Production of the now-designated SA 330B "Puma" officially began in September of that year to which some 697 total examples were eventually produced. The Puma officially entered operational service in 1970. Pumas went on to serve in no fewer than 40 air forces and armies worldwide - from Albania to Zaire - making it one of the most successful helicopter designs of all time.

As an aside, 1967 found the Royal Air Force (RAF) taking an interest in the French-based system as well and tabbed it for their own revamped needs resulting in an Aerospatiale-Westland joint production partnership. This joint venture would also produce the likes of the fabulous Lynx multi-role and Gazelle light helicopters of which both militaries would field in some number. For the RAF, the arrival of the Puma favorably brought about the end use for their Whirlwind and Belvedere series. British Pumas went under the designation of Puma HC.Mk 1.

At its core, the Puma is powered by twin Turbomeca Turmo IVC turboshaft engines developing 1,575 horsepower each powering a four-bladed main rotor and five-bladed tail rotor (the latter interestingly mounted to the starboard side of the tailfin). Distinctive to the Puma design is that the powerplants are mounted well forward of the cabin rooftop above the stout and contoured fuselage and exhaust at about the middle of the design. Performance figures include a never-exceed speed of 169 miles-per-hour, maximum speed of 159 miles-per-hour, a range of 360 miles and a service ceiling of 15,750 feet with a rate-of-climb nearing 1,400 feet-per-minute.

The forward section of the fuselage fitted the two-man cockpit along with heavy glazing offering up excellent views of the action forward, to the sides, above and below with the forward windshield made up of sloping panels. The fuselage also features windows for the crew cabin. A typical crew is three personnel made up of the pilot, co-pilot and flight engineer. A further 16 passengers can be brought aboard. Both pilots are afforded hinged automobile-style doors while large cabin doors span either fuselage side. The undercarriage is fully retractable and features a conventional arrangement of two main two-wheeled landing gears in lower-fuselage side sponsons and a single nose gear fitting two wheels. The empennage consists of a conventional elevated extension adorned with a single vertical tail fin and a single horizontal tail plane mounted to the port side. The five-bladed tail rotor is mounted to starboard.

As with most multi-role helicopter systems, armament for the Puma is optional, mission-specific and operator-specific. 7.62mm machine guns are the norm while 20mm cannons have also been fielded. In the cargo transport role, provisions were made for the use of an external load hook for underslung cargo carrying.

Notable versions of production Pumas include the initial French Army production SA 330B models, the SA 330C initial export models and the SA 330F initial civilian export production model. Others include the Westland-produced SA 330E for the Royal Air Force, the upgraded SA 330H for the French Army and the SA 330Z prototype sporting a Fenestron shrouded tail rotor. The South African firm Atlas Aircraft Corporation locally-produced the similar Oryx for their Air Force while IPTN of Indonesia did the same with their NAS 330J's. Westland jumped into the fray to offer the Puma HC.Mk 1 for the RAF, these being based on the SA 330E model series. Romania is the other foreign producer of the type, fielding it under its home-made IAR 330 guise produced by ICA.

Notable Puma operators have included the Royal Air Force, South Africa and Lebanon. Civilian-based operators reside in the United States, South Africa and Germany. The Puma was replaced on the Aerospatiale line by the much improved AS332 "Super Puma", this time falling under the Eurocopter product banner though similarly retaining the "AS" (for Aerospatiale) in the model designation.

March 2021 - The British Royal Air Force seeks to retire its Puma HC.2 fleet before the end of the decade.

(Showcased performance specifications pertain to the Aerospatiale SA 330H Puma production variant. Compare this aircraft entry against any other in our database. View aircraft by powerplant type)
Mission-specific depending on role and operator. May include machine guns and cannons as needed. 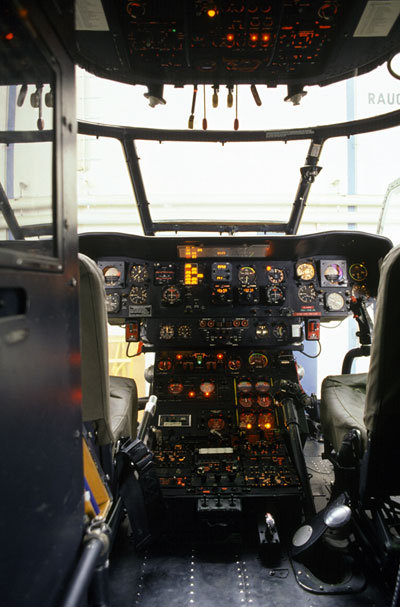