The AS332 Super Puma was based on the successful SA 330 Puma design and is a larger aircraft with newer engines.

Authored By: Staff Writer | Last Edited: 04/27/2020 | Content ©www.MilitaryFactory.com | The following text is exclusive to this site. 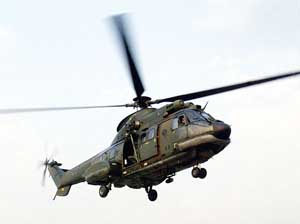 The Super Puma was developed by French-based Aerospatiale (formerly Sud Aviation) from the successful AS 330 Puma series of medium-lift utility helicopters. The newer Super Puma design was essentially a base Puma with an improved avionics suite, enlarged fuselage, new Turbomeca-brand Makila-type 1,700 shaft horsepower turboshaft engines, intake fitters, ventral fin structure along the tail boom, revised nose assembly and a composite main rotor blade. Since the type entered production, Aerospatiale had merged with Germany's Daimler-Benz Aerospace AG (DASA) to become Eurocopter in 1992. The Super Puma is now marketed under the Eurocopter brand label though it still retains the "AS" (for Aerospatiale) designation in its model number.

The Super Puma prototype achieved first flight on September 13th, 1978. The prototype was designated as the AS 331. The new design, being larger than the Puma, was allowed greater cabin space for more passengers and more fuel for greater ranges. The nose featured provisions for the Honeywell Primus 500 or Bendix/King RDR 1400 series weather radars. Super Pumas were eventually produced in short and long fuselage versions. Early users of Super Pumas became the commercial oil industry where the large helicopter proved popular in shuttling oil rig workers to and fro.

Externally, the Super Puma shares many of its characteristics with the preceding Puma design. Its engines are mounted forward and high atop the fuselage exhausting outwards above the crew cabin. The engines power a four-bladed composite construction main rotor and five-bladed tail rotor mounted to starboard. The pilot and co-pilot are fitted into a glazed forward-mounted canopy with excellent views in all vital directions. Each pilot is afforded an automobile-style door for easy entry and exit. The fuselage sides are dominated by two large cabin doors (one door to a side) with cabin windows. The undercarriage is full retractable and features two main landing gears (single-wheeled) recessing into low-mounted fuselage side sponsons as well as a nose gear fitting two wheels recessing behind and under the cockpit floor. Like the Puma series before it, the Super Puma features an elevated empennage with a single vertical tail fin and a horizontal tailplane jutting out of the portside of the fin.

Like the Puma before it, the Super Puma has been widely accepted into service with dozens of countries around the world. The Super Puma has since been branched into a dozen or so variants beginning with the AS 331 prototype. This produced the AS 332A commercial pre-production models followed by the first commercial production examples designated as the AS 332C. Military pre-production models became the AS 332B followed by the initial militarized forms in the AS 332B1. The AS 332 C1 was a dedicated Search & Rescue (SAR) example equipped with six cabin stretchers and a surface search radar. The AS 332F became a militarized anti-submarine and anti-ship variant while the AS 332F1 was a base navalized Super Puma modified to contend with the rigors of the salty ocean environment.

The AS 332L first flew on October 10th, 1980, appeared as a new civilian production model and sported a lengthened fuselage for an increase in its cabin space and fuel capacity as well as uprated turboshaft engines. Operations of the type were certified in 1983. The AS 332L1 was a similar model featuring an even more lengthened fuselage containing an airliner-type interior and uprated Makila 1A1 turboshaft engines and made its operational appearance in 1986. The AS 332M became a militarized version of the AS 332L model while the AS 332M1 was a similar militarized AS 332L with a lengthened fuselage. ©MilitaryFactory.com
Advertisements

The AS 332L2 "Super Puma Mk II" was a further civilian-based transport development of the type beginning service in 1993 and featuring a long-fuselage for an extra row of seats. These Super Pumas were also given a spheriflex rotor head with EFIS flight instrumentation as well as longer main rotor blades with parabolic tips and a four-axis Automatic Flight-Control System (AFCS). The cockpit was updated to include four large multi-function LCD screens. Passenger seating is between 19 and 24 persons. A 15-passenger VIP model (Super Puma Mk II VIP) is also available complete with galley and toilet.

The AS 332L1 utilized twin Turbomeca Makila 1A1-series turboshaft engines running at 1,742 shaft horsepower each while the AS 332L2 fitted twin Turbomeca 1A2-series turboshaft engines rated at 1,819 shaft horsepower each. Top speed for the AS 332L1 was 278 kilometers-per-hour with a range of 841 kilometers and a service ceiling of 20,000 feet. Rate-of-climb was listed at 1,618 feet-per-minute. Comparatively, the AS 332L2 operated at a top speed of 278 kilometers-per-hour, a range of 831 kilometers, a service ceiling of 23,622 feet and a rate-of-climb of 1,614 feet-per-minute.

Indonesian Aerospace (formally IPTN) has license-produced the Super Puma as the NAS 332L1 of which at least 7 were sold to Iran in a 1996 deal.

Beginning in 1990, Super Pumas were separated in their civilian and militarized forms by the latter taking on the production designation of AS 532 "Cougar" (civilian models still retained their AS 332 designations). The Cougar family now consists of the AS 532MC Mk I (note the "Mk I" mark designation was retroactively applied to previous Super Puma forms) as a Search & Rescue (SAR) platform, the AS 532SC Mk I as a short-fuselage anti-submarine variant, the AS 532U2 Mk II as an unarmed base model, the AS 532A2 Mk II as another Search & Rescue form, the AS 532L2 Mk II featuring a lengthened fuselage for extra seating and extended main rotor blades, and the simplified AS 532 "Cougar 100" with fixed landing gear. Militarized Super Puma/Cougar aircraft can display a broad range of armaments including 7.62mm general purpose cabin-door machine guns (on pintle mountings), 7.62mm gun pods, rocket pods, anti-ship missiles and various makes of air-to-surface missiles.

The Eurocopter EC 225 civilian and its EC 725 militarized variant is an improved version of the Puma family line. This system first flew in November of 2000 and features a five-bladed main rotor assembly. It also has a larger cabin with newer Makila 1A4 turboshaft engines featuring FADEC (Full Authority Digital Engine Control), a greater Maximum Take-Off Weight (MTOW) and revised EFIS avionics.

April 2009 - A recent Super Puma-related accident occurred on April 1st, 2009 involving a Bond Offshore Helicopter Super Puma AS 332L2 model. This system crashed into the North Sea killing all 16 personnel on board. The cause of the accident is reportedly related to the main rotor gearbox which had suffered failure in the flight.

(Showcased performance specifications pertain to the Eurocopter AS532U2 Cougar Mk II production variant. Performance specifications showcased above are subject to environmental factors as well as aircraft configuration. Estimates are made when Real Data not available. Compare this aircraft entry against any other in our database or View aircraft by powerplant type)
Mission-Specific / Operator-Specific optional armament can include any of the following: 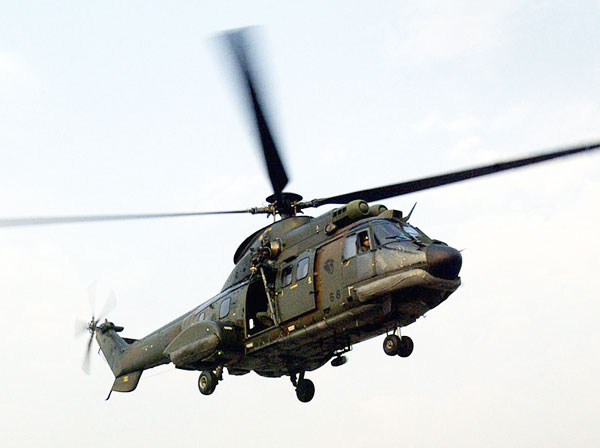 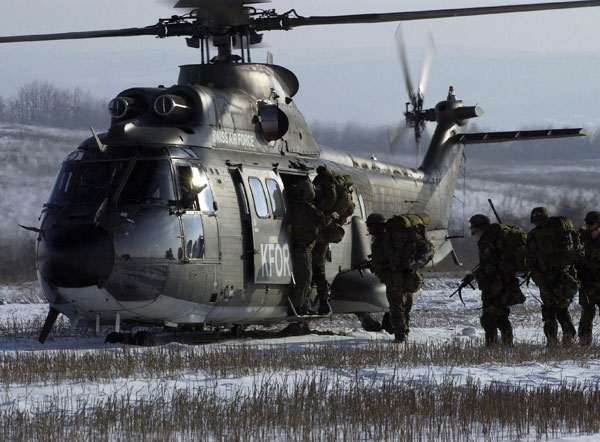 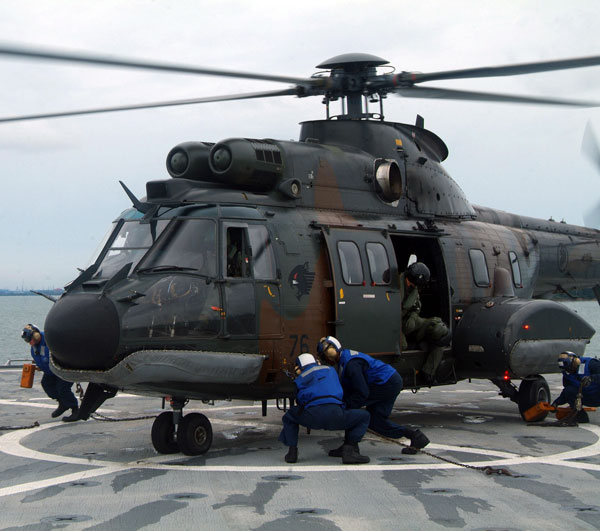