Authored By: Staff Writer | Last Edited: 08/01/2021 | Content ©www.MilitaryFactory.com | The following text is exclusive to this site. 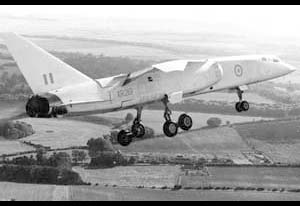 Along the same lines as the prototype North American XB-70 Valkyrie strategic bomber of the United States Air Force, the BAC TSR-2 was to be England's "super" Cold War tactical strike and reconnaissance bomber (the "TSR" in the formal designation equates to "Tactical Strike / Reconnaissance"). The program was intended to provide the United Kingdom with a supersonic, low-level bombing platform capable of delivering both conventional and nuclear weapons with precision. From the outset, the TSR-2 was on pace to become just what was intended. However, ballooning program costs (primarily due to low initial estimates) and political changes in British government soon doomed the aircraft to the pages of aviation history.

The TSR-2 was initially a product of the English Electric and Vickers-Armstrong aviation concerns with the primary aim of replacing English Electric Canberras as Britain's principle long-range, low-level supersonic bomber (as well as possibly the entire family of nuclear-capable "V-Bombers"). Design work began in 1958 to which the project was approved in 1959. English Electric and Vickers-Armstrong were then pushed into a merger with Bristol and Hunting to become the British Aircraft Corporation (BAC) in 1960. The aircraft utilized the latest advances in swept wing technology to provide a pleasing airframe with exceptional airflow qualities. The fuselage consisted of a tubular design with slab sides and a raised spine behind the pair of inline cockpits for its crew of two. The main wing elements were set at amidships and high mounted to provide excellent clearance and lift. Intakes were fitted well aft of the cockpit and aspirated the pair of Bristol-Siddeley Olympus B.OI22R (Mk 320) turbojet powerplants. The side-by-side engines exhausted under a single vertical tail fin. At the rear sides of the fuselage were low-set horizontal stabilizers arranges in a traditional fashion. All wing surfaces were swept along their leading and trailing edges. The undercarriage was wholly retractable and of the tricycle arrangement with a two-wheeled nose leg and two twin-wheeled main legs. The undercarriage legs were noticeable long given the TSR-2 a decidedly tall appearance when at rest. Internal controls were advanced and included Heads Up Displays (HUDs), specialized weapons systems and communications (by Plessi) facilities, forward and side-looking (by EMI) radars and integrated terrain-following capabilities (by Ferranti) for low-level approaches. Onboard cameras covered the reconnaissance role. Avionics design was handled by Marconi.

First flight of a prototype airworthy TSR-2 was recorded on September 27th, 1964. While the TSR-2 proved itself enough to warrant a serial production order, the rising development and production costs and the now-governing Labour Party forced the TSR-2 into mothballs and subsequent cancellation in 1965 - just a short six years after the entire project was initially green-lighted. The TSR-2 prototype managed a mere 13 airborne hours across two dozen controlled flights and it was this sole TSR-2 form that proved the only airworthy mount of the 23 total airframes reaching various stages of completeness.©MilitaryFactory.com
Advertisements

The British military then elected to order the American General Dynamics F-111 Aardvark through a 50-strong order. However, this was also cancelled amidst rising procurement costs. The need was then fulfilled through a combination fielding of the American McDonnell Douglas F-4 Phantom II and the Blackburn Buccaneer. The Panavia Tornado eventually superseded the latter in the strike role.

BAC was made defunct on April 29th, 1977. Only two airframes of the TSR-2 project survived the subsequent scrapping initiative posed after the program's cancellation. One prototype can be found at the RAF Museum at Cosford and the other at the Imperial War Museum of Duxford.

The TSR-2 was designed to carry ordnance across an internal and external weapons arrangement. Up to 6,000lbs of stores were housed in an internal bomb bay with up to 4,000lbs held externally for a total of 10,000lbs of possible weaponry. The airframe would have supported the carrying and release of the "Red Beard" 15 kiloton nuclear weapon or 6 x 1,000lbs of conventional drop bombs. There was noted support for the WE.177 nuclear bomb across four hardpoints. The TSR-2 could also make use of 37" rocket pods for the strike role.©MilitaryFactory.com
Note: The above text is EXCLUSIVE to the site www.MilitaryFactory.com. It is the product of many hours of research and work made possible with the help of contributors, veterans, insiders, and topic specialists. If you happen upon this text anywhere else on the internet or in print, please let us know at MilitaryFactory AT gmail DOT com so that we may take appropriate action against the offender / offending site and continue to protect this original work.
Advertisements

RADAR-CAPABLE Houses, or can house (through specialized variants), radar equipment for searching, tracking, and engagement of enemy elements.
COUNTERMEASURES Survivability enhanced by way of onboard electronic or physical countermeasures enacted by the aircraft or pilot/crew.
MULTI-ENGINE Incorporates two or more engines, enhancing survivability and / or performance.
SUPERCRUISE Capable of sustained supersonic flight without the need for engine afterburner/reheat enabled.
WING SWEEPBACK Mainplanes, or leading edges, features swept-back lines for enhanced high-speed performance and handling.
INTERNAL BAY Fuselage volume includes space for internally-held weapons or special-mission equipment.
HIGH-SPEED PERFORMANCE Can accelerate to higher speeds than average aircraft of its time.
HIGH-ALTITUDE PERFORMANCE Can reach and operate at higher altitudes than average aircraft of its time.
EXTENDED RANGE PERFORMANCE Capability to travel considerable distances through onboard fuel stores.
SUPER PERFORMANCE Design covers the three all-important performance categories of speed, altitude, and range.
PILOT / CREW EJECTION SYSTEM Assisted process of allowing its pilot and / or crew to eject in the event of an airborne emergency.
CREWSPACE PRESSURIZATION Supports pressurization required at higher operating altitudes for crew survival.

(Showcased performance specifications pertain to the base BAC TSR-2 production variant. Compare this aircraft entry against any other in our database or View aircraft by powerplant type)
Mission-specific ordnance up to 10,000 lb across internal (6,000 lb) and external (4,000 lb) bay / hardpoints to include nuclear bombs, conventional bombs, and rocket pods.

TSR-2 - Main Series Designation; 1 flyable airframe completed with as many as 23 airframes in various stages of completeness. 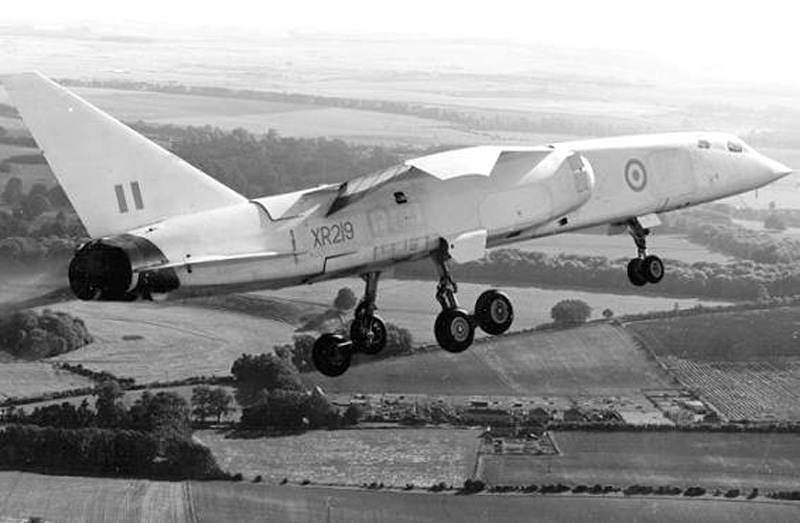