The Petlyakov Pe-2 went on to become the best Soviet light tactical bomber of World War 2 with production netting 11,427 units.

Authored By: Staff Writer | Last Edited: 05/21/2019 | Content ©www.MilitaryFactory.com | The following text is exclusive to this site. 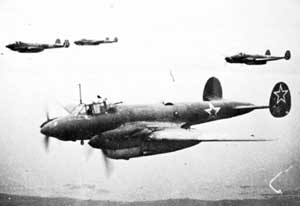 During World War 2 (1939-1945), the Soviets lacked a heavy bomber stable when compared to the British and Americans. Instead, and primarily due to the short-ranged war it would fight against one-time ally Germany, it fielded a collection of fighters and twin-engined light/medium aircraft. The Petlyakov Pe-2 was one such twin-engined development with design attributed to Vladamir Petylyakov (1891-1942). It proved to be one of the best ground-attack platforms of the whole war, its value solidified through the 11,427 numbers built. These aircraft saw combat service against the Axis in Europe and Japanese forces in Manchuria, serving over all major Soviet-related fronts of the war.

Entering the war, the Soviets and Germans stood as Allies. When Germany invaded neighboring Poland in September of 1939, it began what would become a year's long struggle for the world. Weeks later, Soviet forces arrived to effectively divide Poland in two. The Germans then turned on the Soviets for, in June of 1941, Hitler enacted "Operation Barbarossa" - the invasion of the Soviet Union - and officially began the East Front. While gains were initially excellent for the Germans and losses horribly bad for the Soviets, the ensuing winter and strained supply lines slowed the Germans just outside of Moscow. Regrouping, the Soviets then began their monumental push westwards until the entire Axis war machine was destroyed at Berlin in April of 1945.

Prior to the war in 1937, aeronautical engineer Vladimir Petlyakov was serving a prison sentence at a Soviet camp when he and others were charged with designing a new high-altitude fighter to serve as escort for a new bomber. His team developed the VI-100, a two-seat, twin-engine speedster featuring a pressurized cabin for the high-altitude requirement and modern all-metal construction. Progress then produced the initial prototype form which was fitted with 2 x Klimov M-105 V-12 turbocharged engines of 1,100 horsepower. First flight was recorded on May 7th, 1939 and the design showcased a maximum speed nearing 390 miles per hour. A second prototype was later added and testing proved so successful and the design so promising that the aircraft was ordered for production by the Soviet Air Force.

By this time, however, the Germans had begun their "blitzkrieg" campaigns in Europe and showcased the value of concentrated, well-coordinated attacks involving dive bombers (primarily the Junkers Ju 87 "Stuka"). As all nations observed the progress of what was now modern warfare, many searched to copy this battlefield success and adopted similar platforms in turn. For the Soviets, the Petlyakov-led design was selected for revision into a dive bomber form.

Work began immediately and the turbochargers were dropped with the adoption of the M-105K series engines (high-altitude capability was lost which led to a now-unpressurized crew cabin and lower fighting ceiling). Dive brakes of a lattice design type were installed to retard the dive of the aircraft while dihedral was added to the tail plane to promote increased stability. A glazed nose assembly was instituted as was a third crew member (now consisting of a pilot, bombardier and dedicated machine gunner. For its dive bomber role, the aircraft was granted defensive armament in the way of a 7.62mm ShKAS machine gun in a dorsal position and another 7.62mm machine gun was added to a ventral, rear-facing, gun position- this aimed through a periscope by the gunner. General armament included 2 x 7.62mm ShKAS machine guns in fixed, forward-firing positions in the nose to be controlled by the pilot. These were (later) substituted for a 1 x 7.62mm ShKAS and 1 x 12.7mm UBT heavy machine gun arrangement for greater firepower. Similarly, the dorsal gun position could be substituted for the larger-caliber 12.7mm machine gun. Maximum bomb load for the aircraft totaled between 2,650lbs to 3,500lbs (depending on variant) and consisted of conventional drop ordnance held in an internal bomb bay or externally.

With the changes, the VI-100 was evolved into the "PB-100" prototype and it was this design that was officially adopted by the Soviet Air Force as the Petlyakov "Pe-2". Two prototypes featuring the changes were completed and tested. Externally, the aircraft exhibited a conventional twin-engined design form. The engines were held in extended nacelles at each wing leading edge. The wings were straight appendages with rounded tips and mounted just ahead of midships. The cockpit, despite its heavy framing, was seated well-forward in the design, offering generally excellent visibility for an aircraft of this type. The three crew were seated in line and protected by 9mm of armor plating. The fuselage was long and well-streamlined, tapering at the empennage. The tail unit consisted of a split-rudder configuration extended outboard by individual horizontal planes along the aft fuselage sides. The undercarriage was wholly retractable and of the "tail-dragger" arrangement consisting of two single-wheeled main legs and a tail wheel. This gave the aircraft a pronounced "nose-up" appearance when at rest.

Power for the accepted version was the Klimov M-105R inline piston engine developing 1,100 horsepower while driving three-bladed propellers. Maximum speed was 336 miles per hour while cruising was 266 miles per hour. The aircraft's service ceiling peaked at 28,870 feet and featured a range out to 932 miles. Overall, the Pe-2 proved a fast aircraft and agile performer, requiring a steady hand at the controls. The first production-quality Pe-2 was flown in November of 1940 and the line was officially introduced in 1941 in limited numbers.©MilitaryFactory.com
Advertisements

By the time of the German invasion of June 1941, the Soviets managed a Pe-2 stable of some 458 aircraft and deliveries proved slow - handfuls of the type made up whole dive bomber groups. Additionally, there were few trained crews to be used and it was not until August of 1941 that the aircraft arrived in serious, useful numbers. When pressed into action, the Pe-2 did not disappoint in their given battlefield role. A heady pilot and bombardier pairing, along with a capable machine gunner, proved highly effective in the "repulse" campaigns enacted by the Soviets in the months following the German onslaught. Indeed, the Pe-2 contributed much to the land advanced of Soviet troopers following the many deflating defeats against the Germans prior. This led to their increased use over all challenged fronts where, when used in conjunction with artillery and armor, could provide a Soviet brand of blitzkrieg on the beleaguered Axis infantry forces and armored columns. Pe-2s were eventually committed to the famous fighting in and over Leningrad, Kharkov, Kursk and Stalingrad and elsewhere. Pe-2s graduated from their original dive bomber roles to serve as reconnaissance platforms, fighter-bombers, light bombers and night fighters as the war situation required. A strong airframe (required for the original dive bombing role) and cockpit armoring allowed it to be used in just about any way imaginable to a desperate commander.

Original Pe-2s offered considerable after-action reporting from crews which allowed Soviet engineers a springboard for improving the type. Additionally, the unexpected arrival of the new, faster German Messerschmitt Bf 109F models pushed the envelope of the Pe-2, requiring them to raise typical level-bombing ceilings which, in turn, reduced bombing accuracy. In response during late 1942, this led to the development of the Klimov M-105PF-engined Pe-2FT variant which also upgraded the dorsal defensive armament to 12.7mm caliber from its original 7.62mm offering and added armor protection (which reduced some performance). From mid-1942 onwards, an additional 7.62mm could be fired by the machine gunner through side and dorsal hatches at midships for additional protection. The dive brakes were removed and glazing at the nose assembly was reduced. Pe-2FTs proved the definitive Pe-2 variant.

In time, the line was greeted by a pair of dedicated fighter-bomber models in the Pe-2I and the Pe-2M, these being outfitted with VK-107A series engines of 1,620 horsepower. The variants expanded the Pe-2s role in that they could now be pressed in combat in the strike or counter-fighter role. A dedicated reconnaissance platform then came online under the Pe-2R designation. Crews of all Pe-2s received their training on the dedicated dual-control Pe-2UTI and Pe-2S (two-seat) trainer forms. The Pe-2-2M was a prototype with VK-105 series engines with larger bomb bay. The Pe-2B was a standardized bomber variant appearing in 1944. The pe-2D was a three-seat bomber with 2 x VK-107A engines. The Pe-2K was fitted with radial engines and saw limited production. The Pe-2MV added 20mm ShVAK cannons coupled to 2 x 12.7mm heavy machine guns in an underfuselage position. The Pe-3 was related variant of the Pe-2, customized for the night fighter/heavy fighter role. Limited production of a related Pe-4 is also noted.

The Pe-2 managed a healthy service life from the beginning of the Eastern Front commitment in 1941 to the end of the war in 1945. Indeed, it was likened to the famous war-winning de Havilland Mosquito of the British cause for its multi-role capabilities and importance to the Soviet effort. The Pe-2 went on to become one of the finest of the twin-engined examples in all of World War 2 - though often overshadowed by the more popular twin-engined Ilyushin Il-2 "Shturmovik" ground attack series. It was already being replaced some from 1944 onwards by the Tupolev Tu-2 medium bombers.

Wartime use was not limited to the Soviet Union for Czechoslovakia became a formal, albeit limited, operator. Finland operated only captured Soviet examples. The Pe-2 was exported in the post-war years to Bulgaria, China, Czechoslovakia (additional units), Hungary, Poland and Yugoslavia. Pe-2 types survived into 1954 before being discontinued. Its final operator became Yugoslavia. Very few have survived as museum showpieces today (December 2013).©MilitaryFactory.com
Note: The above text is EXCLUSIVE to the site www.MilitaryFactory.com. It is the product of many hours of research and work made possible with the help of contributors, veterans, insiders, and topic specialists. If you happen upon this text anywhere else on the internet or in print, please let us know at MilitaryFactory AT gmail DOT com so that we may take appropriate action against the offender / offending site and continue to protect this original work.
Advertisements 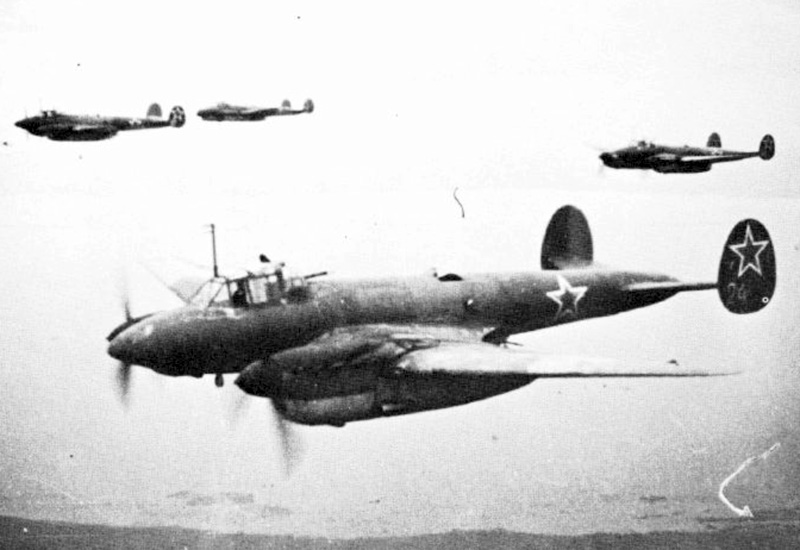