The Mil Mi-6 Hook heavy-lift transport helicopter continues to serve around the world despite production concluding in 1981.

Authored By: Staff Writer | Last Edited: 08/18/2018 | Content ©www.MilitaryFactory.com | The following text is exclusive to this site. 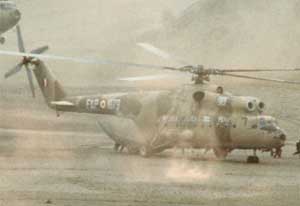 The Mil Mi-6 was an inventory stalwart for the Soviet Union and its allies during the Cold War. For a time, the Mi-6 represented the largest helicopter production airframe in the world and proved to be the fastest such aircraft, netting several world speed records early in her tenure. Her rugged qualities assured her active duty in the far-reaching areas of the Siberian territories and, despite her Cold War roots, she still maintains an active military presence in world air arms - a testament to her design and general usefulness. The Russians retired the type themselves in 2002 as age began creeping into the maintainability and operational costs of this fine rotary aircraft.

Origins
The Mi-6 originated in a joint Soviet Air Force/Aeroflot need for a large, heavy-lift transport helicopter system. Truth be told, the requirement was a staggering endeavor but matched carefully by the veteran engineers at Mil. The resulting design produced the mammoth V-6 prototype series. First flight of the V-6 occurred in September of 1957 with test pilot N.B. Leshin at the controls. By capability alone, the V-6 would be able to match the muscle of such fixed-wing, transport mounts as the American Lockheed C-130 Hercules, proving that the V-6 certainly had some "kick" to her drive train. Her engine and gearbox components were all large elements making up a most powerful internal lift system. The V-6 ultimately graduated to become a full-production model by 1960 and was showcased in the Soviet inventory under the designation of "Mi-6". She quickly garnered the NATO nickname of "Hook" for recognition purposes. It was common practice for NATO to assign (sometimes derogatory) codenames for Soviet-originated aircraft. Fighters took on codenames beginning with the letter "F" (as in "Fishbed" or "Fulcrum") while bombers were given "B" names (as in "Bison" or "Bear"). Helicopters were, therefore, aptly given "H" names (as in "Hind" or "Hip"). The Mi-6 was notable in the annals of Soviet aircraft lore for she became the first turboshaft-powered helicopter to reach both production status and operational service in their ranks. Furthermore, she became the first helicopter anywhere in the world to break 300km/h, setting a speed record in the process.

Production and Marks
NOTE: Soviet aircraft designations are never as "clean" as some might find in Western inventories where "A", "B" and "C" models are ever-prevalent. Instead, models are designated moreso by their inherent function and marked in the Russian language so designations never truly fall into a convenient chronological listing (at least to the Western observer).

Production of this massive helicopter ultimately yielded over 925 examples with examples originating from Soviet factories from 1960 into 1981.

As mentioned above, the Mi-6 began as the V-6 prototype model (also known under the formal designation of "Zavod No.329 Moscow"). Development culminated in the first production models encompassing the generic "Mi-6" designation with these representing the base heavy-lift transport helicopter family. NATO assigned the codename of "Hook-A" to the first production series. These were followed by the Mi-6A, a dedicated civilian transport model that offered impressive seating for up to 90 passengers. The dedicated military transport derivative became known as the Mi-6T (also "Hook-A" by NATO) and sported seating for up to 70 personnel.

Other militarized variants soon followed and included the Mi-6VKP ("Hook-B") Airborne Electronic Warfare (AEW) platform and aerial command post (identified by its many antenna), the Mi-6BUS ("Hook-C") airborne command post, the Mi-6AYaSh ("Hook-D") airborne command post fitting a SLAR (Side-Looking Airborne Radar) system, the Mi-6PP electronic reconnaissance platform (with AWAC detection and jamming systems), the Mi-6PRTBV fuel transport, the Mi-6R radio communications platform, the Mi-6S MEDEVAC (MEDical EVACuation) variant with room for up to 41 medical litters and the Mi-6TZ/Mi-6ATZ fuel transports, these used to refuel both fixed-wing aircraft and helicopters (though while on the ground and not in-flight).

Of particular note to the Mi-6 variants was the Mi-6M anti-submarine warfare (ASW) platform. This model fitted up to four aerial torpedoes as well as air-to-surface rockets for combating near-surface enemy submarines. The type was further backed by dedicated sub-hunting equipment onboard. Likewise, the militarized Mi-6RVK served as a test-bed for various mobile missile launching systems appearing sometime in 1965.

The Mi-6PS was a specially-modified Search and Rescue (SAR) variant designed to recover the Vostok and Soyuz Soviet space capsules from the sea after re-entry. The Mi-6PSA is thought to be a slightly different version of this modified platform. The Mi-6TP became a convertible hybrid helicopter that could switch from the cargo-transport role to the passenger-transport role with some modification to her cabin.

Mi-6 Dimensions and Weights
The Mil Mi-6 is a dimensionally large rotary-winged vehicle. Including the diameter of themain rotor blades, the helicopter showcases an overall width of 114 feet, 10 inches. Its height is 32 feet, 4 inches and its running length equals 108 feet, 10 inches. When empty, the Mi-6 sports a weight of 60,000lb. With a regular load, it weighs over 89,000lb and can manage a Maximum Take-Off Weight (MTOW) equal to 93,000lb as needed. ©MilitaryFactory.com
Advertisements

Mi-6 Walk-Around
Externally, the appearance of the Mi-6 was decidedly in the Cold War Soviet style of helicopter design. She featured a conical, glazed nose cone ahead of her flight deck. The pilots sat aft of the nose cone assembly with vision ports forward (four panels), above (corner panels) and to the sides (two panels). Entry for the cockpit flight crew was through automobile-style doors to either side of the forward fuselage. The cabin made up a large part of the Mi-6 airframe with each fuselage side dotted with round (sometimes square) porthole windows for outward passenger viewing. Entry to the cabin section was via two rectangular, double-hinged doors, one mounted amidships and the other aft. Large wings were high-mounted to each side of the fuselage (these making up some 20% of the aircraft's required lift when in flight) and, at their wing roots, struts help contain and manage the single-wheeled main landing gear legs. Under each wing and main landing gear strut system was an identifiable cylindrical, capsule-shaped appendage. There was a double-tired nose landing gear system just under the cockpit floor. The undercarriage was non-retractable meaning that the landing gears remained statically exposed during all flights. A split-door cargo access area was fitted to the rear of the fuselage for management of freight loads. The empennage ran from the top of the fuselage and tapered off into a thick vertical tail fin. On the vertical tail fin was mounted a four-bladed tail rotor. There were a pair of smallish horizontal planes at the base of the tailfin. The engines were set above the passenger cabin and aft of the flight deck, exhausting out of side-mounted oval vents. The main rotor was affixed atop the airframe aft of the engine compartments and sat close to the fuselage. The dimensions of the main rotor equaled or surpassed the entire running length of the airframe. Unlike Western helicopter designs, the tail rotor (made mostly of wood) was offset to face away from the starboard side of the aircraft (as opposed to the portside). As can be surmised, the amount of rotor "wash" from this aircraft proved immense (not to mention its engine noise) and would have to be seen/felt to be wholly respected. When at rest, the main rotor blades noticeably drooped down towards the ground, giving the viewer some sense of the sheer weight and flexibility inherent in their design.

Power and Performance
Power for the Mi-6 series was supplied by a pair of Soloviev (now Aviadvigatel) brand D-25V turboshaft engines, each delivering up to 5,500 shaft horsepower. This was a required quality for such a large airframe. The output power drove the large-diameter, five-bladed main rotor as well as a four-bladed tail rotor. Performance specifications included a maximum speed of 300km/h with a cruising speed of 250km/h. Her range was listed at approximately 385 miles with a ferry range equal to 900 miles. Her service ceiling was a reported 14,750 feet.

Mi-6 Operators
Operators of the Mi-6 platform were truly a global bunch, covering use in Asia, Africa, South America and the Western Pacific. Military operators included Algeria, Belarus, Bulgaria, China, Egypt, Ethiopia, Indonesia, Iraq, Kazakhstan, Laos, Peru, Poland, Russia (Soviet Union), Syria, Ukraine, Uzbekistan, Vietnam and Zimbabwe. The discerning reader will note many relationships (such as Iraq) that are/were within the Soviet sphere of influence at the time of the Mi-6's inception. In terms of the Soviet Empire itself, the Mi-6 served with the Soviet Air Force, Army and Naval Aviation services during her active tenure. Several of these systems were later passed on to successor states. The Bulgarian Air Force has also since retired their fleet of aged Mi-6s. Civilian operators became Aeroflot in the former Soviet Union and Instal of Poland, the latter known to have operated at least three Mi-6A models.

Miscellaneous Notes
Of note unique to the legacy of the Mi-6 is that several of her complete airframes can still be found near the irradiated Chernobyl reactor site, untouched for decades and since having fallen into major disrepair. These Mi-6s join similarly abandoned vehicles in what is known as the "vehicle graveyard". Such was the speed - and importance - of the evacuation at Chernobyl at the time of the explosion.©MilitaryFactory.com
Note: The above text is EXCLUSIVE to the site www.MilitaryFactory.com. It is the product of many hours of research and work made possible with the help of contributors, veterans, insiders, and topic specialists. If you happen upon this text anywhere else on the internet or in print, please let us know at MilitaryFactory AT gmail DOT com so that we may take appropriate action against the offender / offending site and continue to protect this original work.
Advertisements

(Showcased performance specifications pertain to the base Mil Mi-6 (Hook) production variant. Performance specifications showcased above are subject to environmental factors as well as aircraft configuration. Estimates are made when Real Data not available. Compare this aircraft entry against any other in our database or View aircraft by powerplant type)
Typically None. Optional: 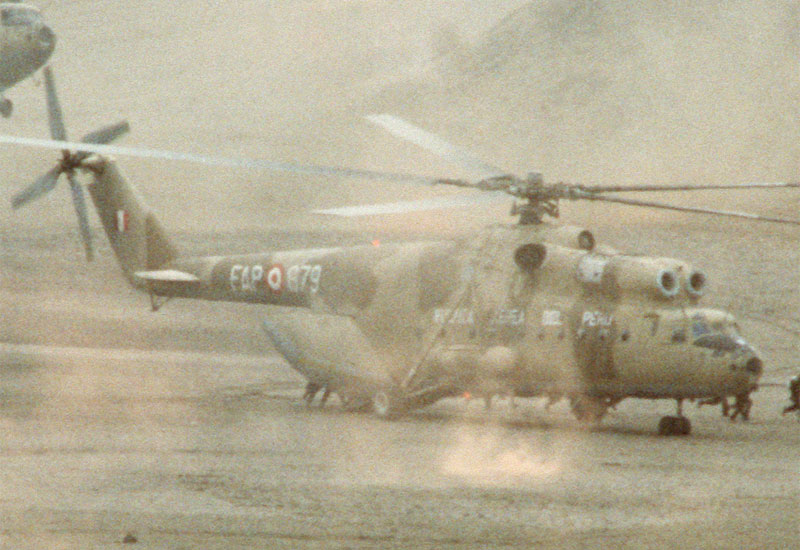 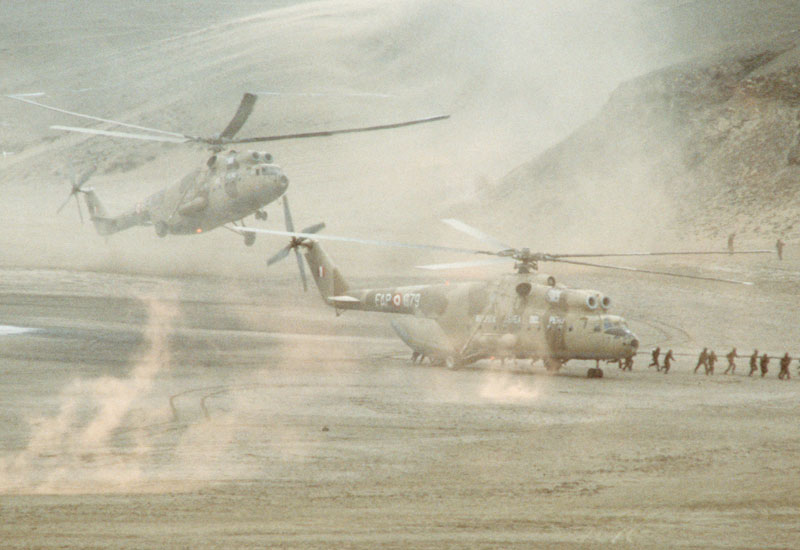 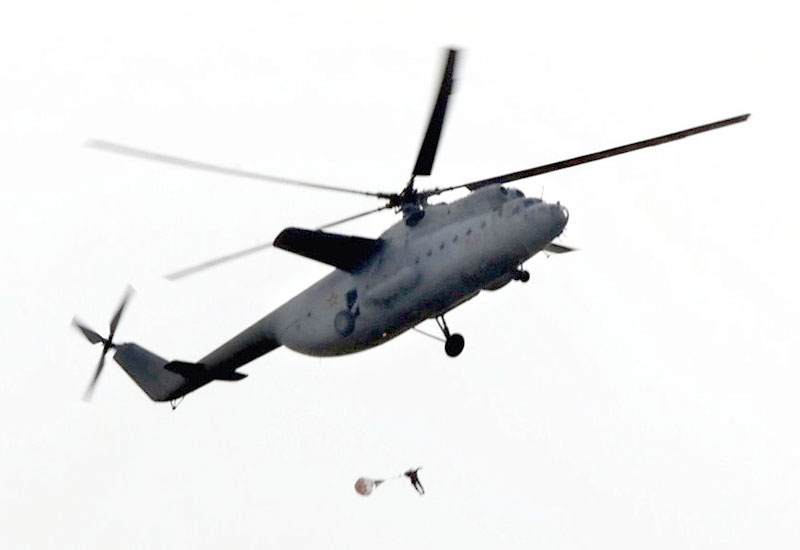 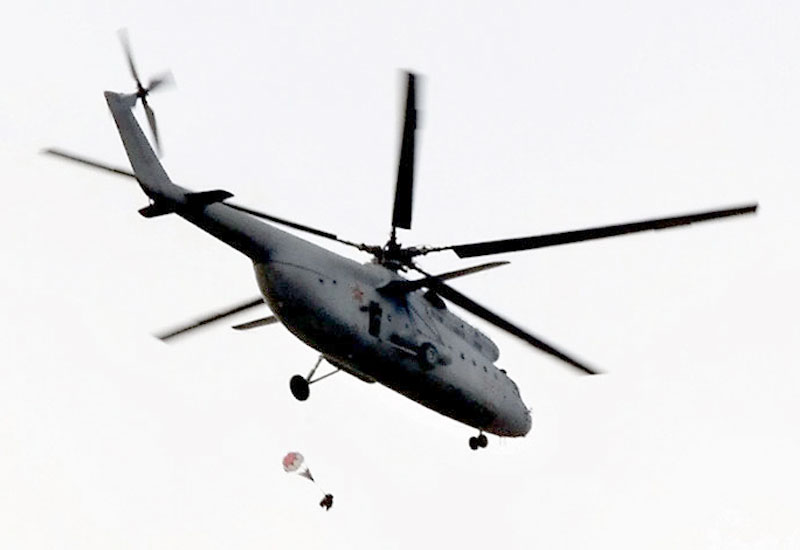 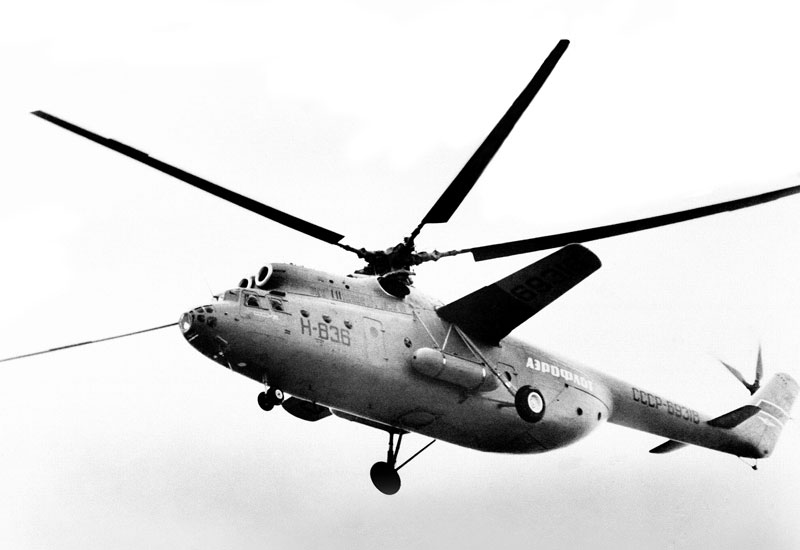 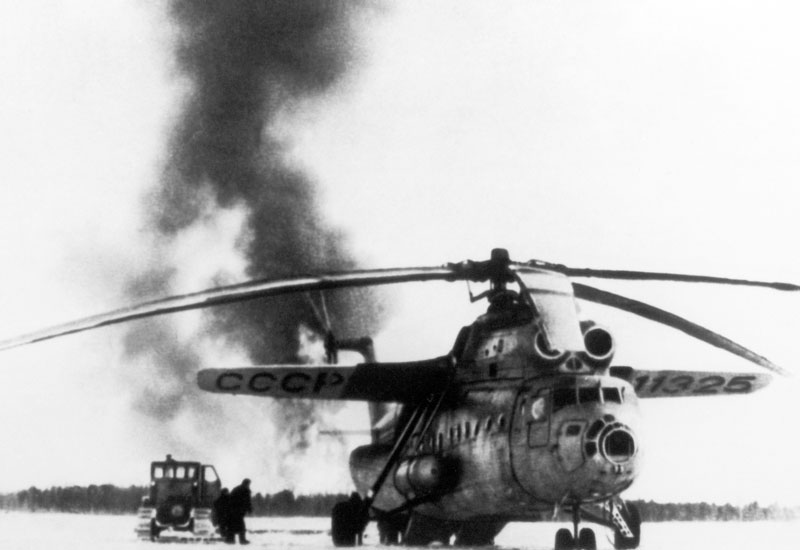