Though initially not as well-liked by her crews as the Douglas Dauntless was, the Curtiss Helldiver went on to sink more ship tonnage than any other aircraft in World War 2. 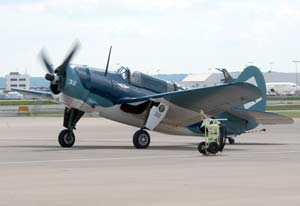 The Curtiss SB2C Helldiver was a rather unassuming dive bomber / reconnaissance aircraft serving throughout World War 2 beginning in 1943. Originally designed in a competition to replace the aging SBC biplane series, the SB2C faced off against Brewster's entry - the XSB2A Buccaneer - with the SB2C coming out the eventual winner. The SB2C went on to replace the aging Douglas SBD Dauntless in service with the United States Navy.

The Helldiver was conceived as a metal, low-monoplane wing design fielding a crew of two seated in tandem within a long cockpit - the pilot in the forward area and the tail gunner in the aft. The SB2C, incidentally, became the third in a long line of aircraft to bear the moniker of "Helldiver" and would go on to earn a substantial combat record in the war. The aircraft was fitted with a single Wright-powered engine at the extreme forward of the fuselage powering a three-bade propeller. The fuselage sported straight wings with a tapered trailing edge and rounded tips. The torpedo-like fuselage became something of a hallmark of the series and a surely identifiable design feature. The design was specifically engineered with a large-area tail assembly for improved handling.

The US Navy Helldiver was produced with a reinforced and retractable undercarriage as well as an arrestor hook for carrier operations. The system would eventually graduate to field high-explosive, unguided rockets under the wings along with its traditional load of bombs in the arsenal. Ordnance could be held in the internal bomb bay (including a single torpedo) as well as along two underwing hardpoints. Standard armament included a pair of fixed forward-firing 20mm cannons (4 x 12.7mm heavy machine guns in earlier production models) in the wings and a pair of 7.62mm M1919 Browning air-cooled machine guns in the rear cockpit.

The one and only XB2C-1 prototype crashed shortly after its maiden flight in November of 1940, with the accident occurring in February of 1941. The system was revised with larger-area tail surfaces, increased offensive armament and self-sealing, increased-capacity fuel tanks. The new design was put into full production with the United States Navy and United States Army (with the latter as the A25-A "Shrike") but suffered from production delays. The Helldiver officially saw her first taste of combat on November 11th, 1943 from the deck of the USS Bunker Hill in strikes against Japanese targets at Rabaul. In action, the early generation SB2C-1 Helldiver left much to be desired. It would not be until the arrival of the SB2C-4 that the system would finally peak.

The US Army Air Force A-25A saw limited use and would later be transferred to some units of the US Marine Corps as a traditional land-based dive bomber / reconnaissance aircraft. These Helldivers would earn the designation of SB2C-1A and would be relegated as trainers never to see combat. The SB2C as a series would see several variants that would improve upon the former model by increasing output power, fuel efficiency and armament. By war's end, the SB2C would become a legend in its own right. Total production peaked at around 7,140 examples.

Despite the nature of the new design - proving larger, but at the same time, faster than the Dauntless it replaced - the Helldiver proved to have some tough handling characteristics that did not liken her to her crews. The aircraft earned such derogatory nicknames as "Son of a Bitch, 2nd Class" in reference to her "SB2C" designation. Regardless, the Helldiver proved a most potent mount and was able to carry a greater ordnance payload than her predecessor.

Operators of the type included the United States, Australia, France, Greece, Italy, Portugal, Thailand and the United Kingdom. The SB2C Helldiver became the last dive bomber produced for the United States Navy. The British Fleet Air Arm received about 26 Helldivers and assigned the designation of "Helldiver I" to their aircraft. After evaluation brought about the poor handling characteristics, none of these aircraft were fielded in combat. Canadian companies Fairchild-Canada and Canadian Car & Foundry both assisted Curtiss in production of the aircraft.©MilitaryFactory.com
Note: The above text is EXCLUSIVE to the site www.MilitaryFactory.com. It is the product of many hours of research and work made possible with the help of contributors, veterans, insiders, and topic specialists. If you happen upon this text anywhere else on the internet or in print, please let us know at MilitaryFactory AT gmail DOT com so that we may take appropriate action against the offender / offending site and continue to protect this original work.
Advertisements

(Showcased performance specifications pertain to the Curtiss SB2C-5 Helldiver production variant. Performance specifications showcased above are subject to environmental factors as well as aircraft configuration. Estimates are made when Real Data not available. Compare this aircraft entry against any other in our database or View aircraft by powerplant type)
STANDARD:
2 x 20mm Automatic cannons in the wings (fixed, forward-firing).
2 x 0.30 caliber Browning M1919 machine guns on a flexible mounting (trainable) in the rear cockpit.

Also up to 500lb of drop ordnance across two underwing hardpoints. 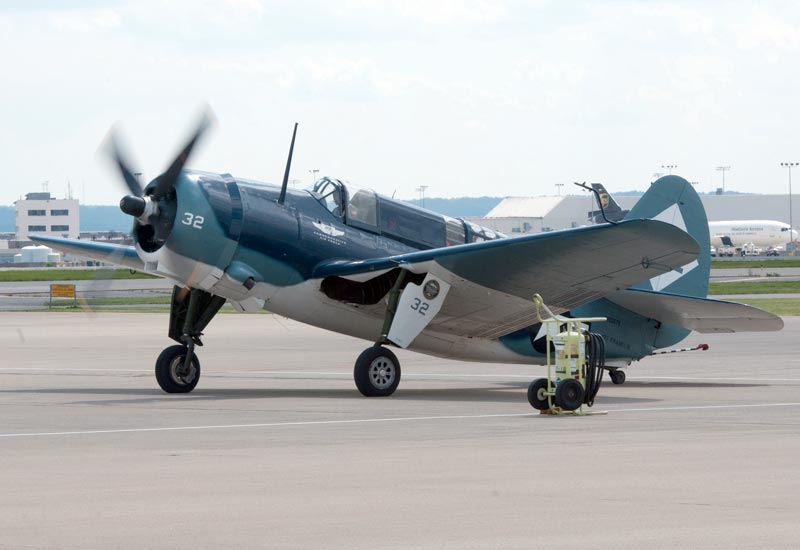 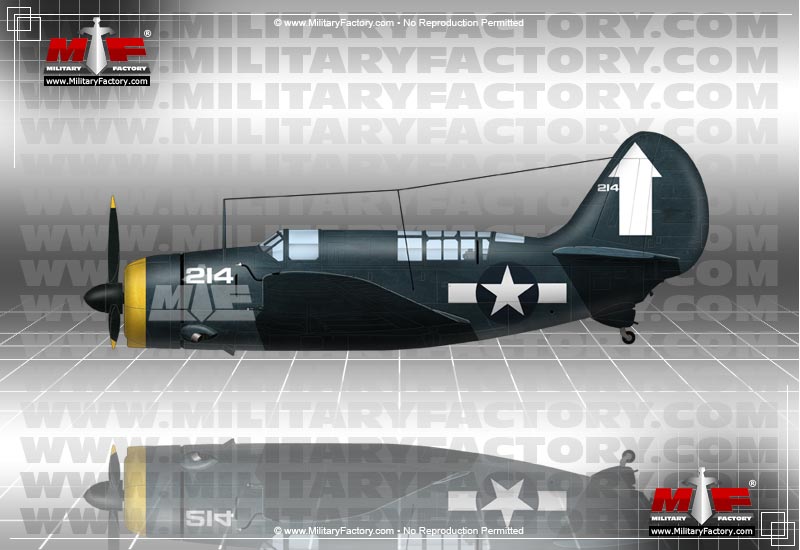 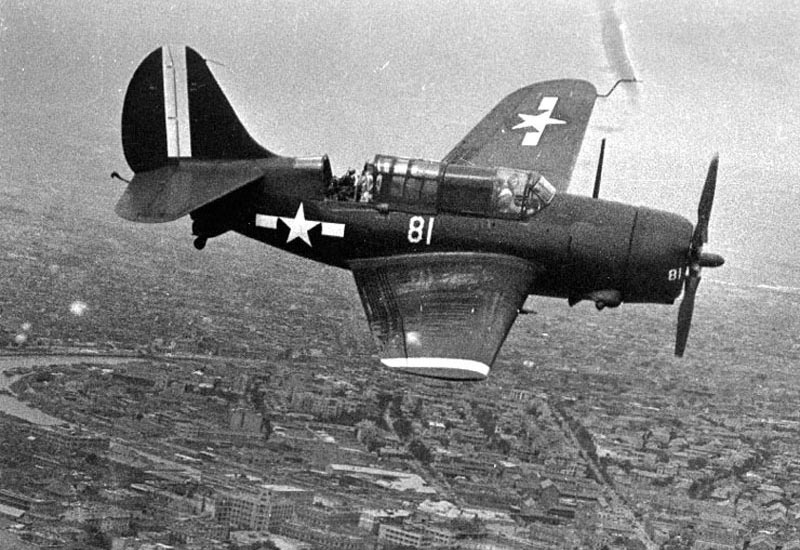 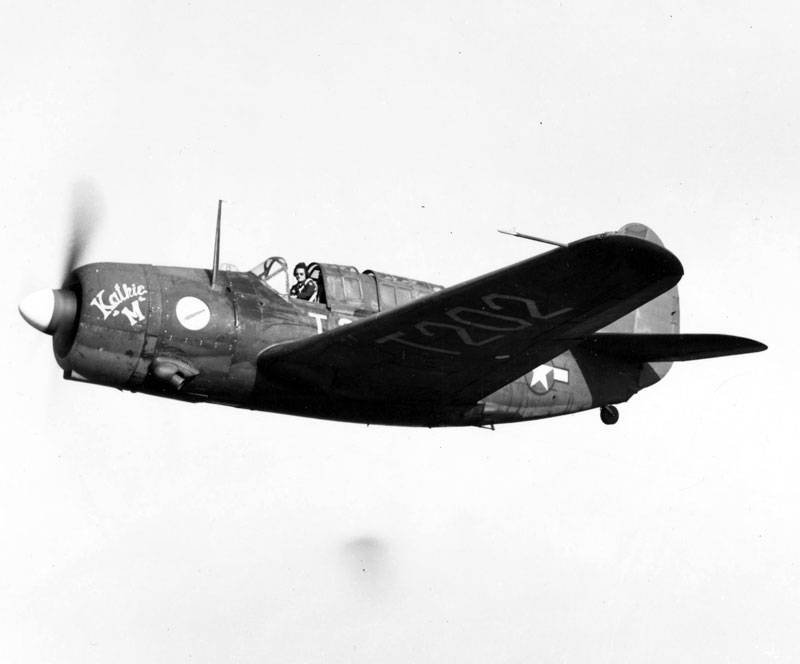 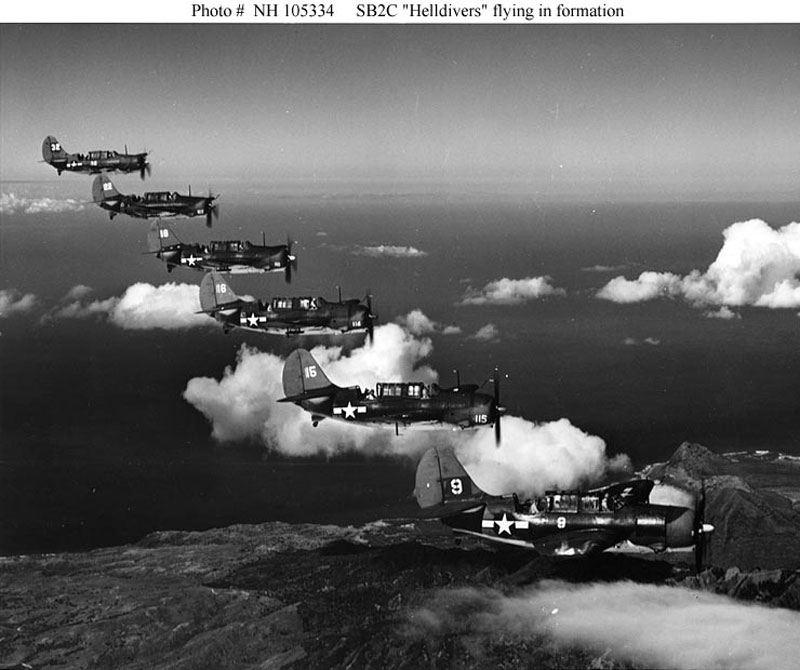 A flight of Curtiss SB2C Helldivers in formation
6 / 12 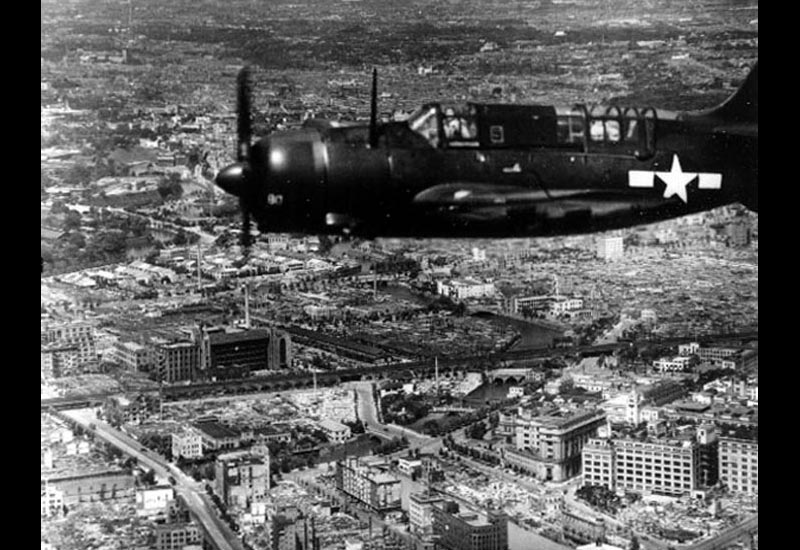 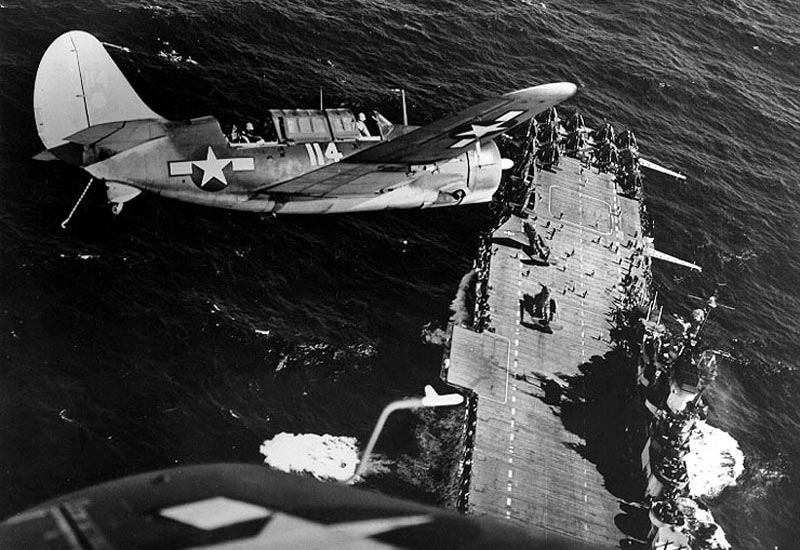 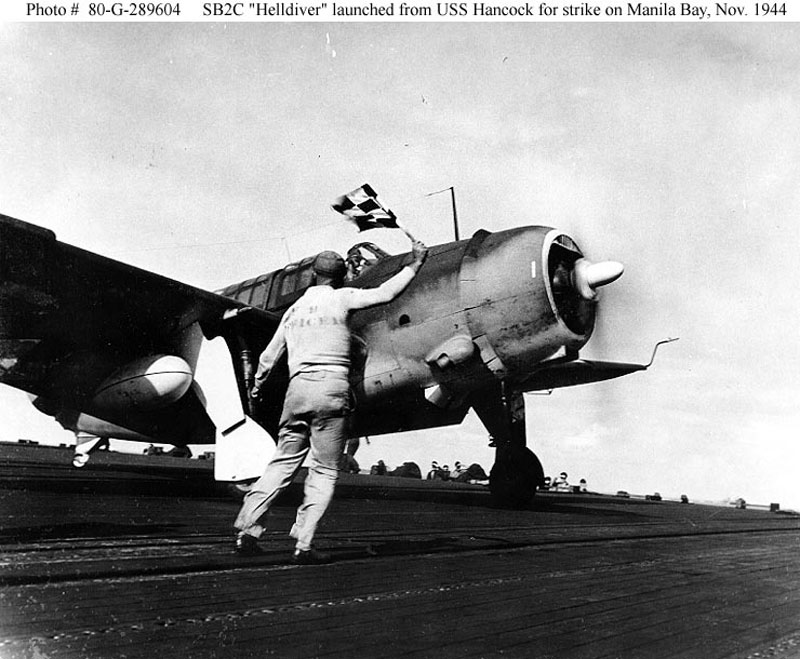 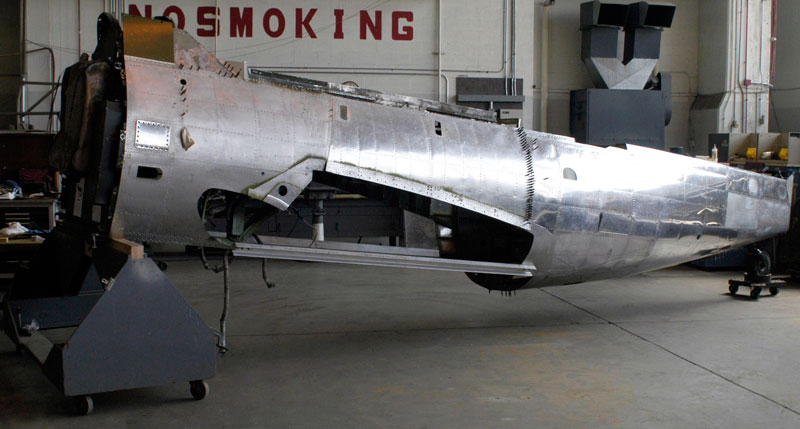 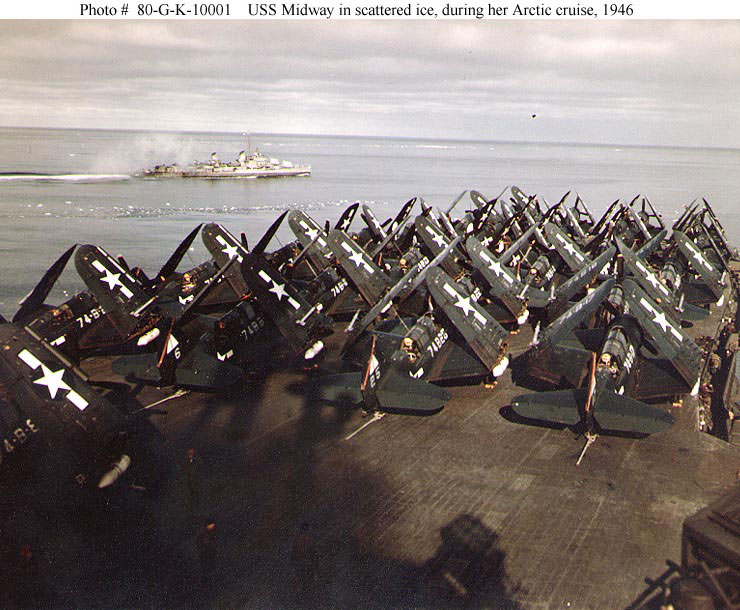 A fleet of Curtiss SB2C Helldivers and Vought F4U Corsairs on the deck of the USS Midway circa 1946; color
11 / 12 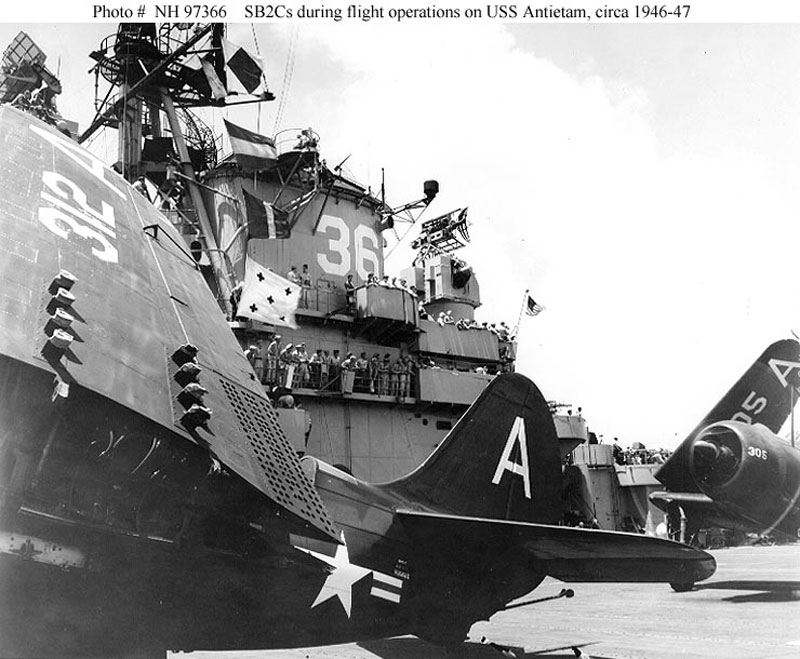 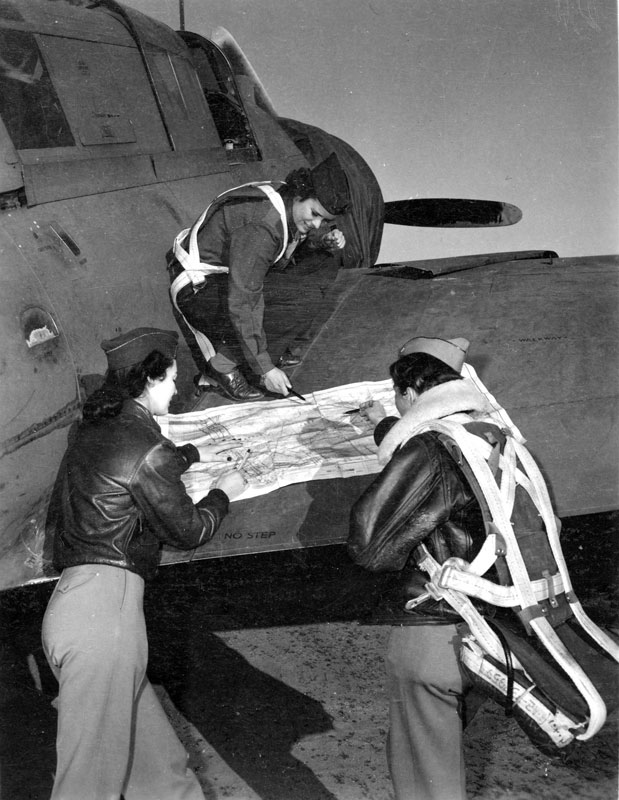