The American-originated Bell P-63 Kingcobra found more success abroad than at home - primarily in the hands of Soviet pilots during World War 2. 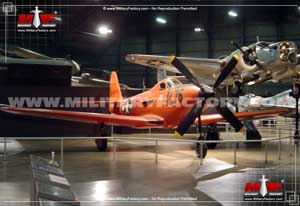 At its core, the Bell P-63 Kingcobra proved a modest improvement over the relative failure that was the P-39 Airacobra. Though the P-39 developed into a useable platform, she never lived up to the original specifications thanks to meddling on the part of the USAAF (United States Army Air Forces). As such, the P-63 was designed with the intention of improving upon the poor high-altitude performance of the P-39, though performance of this system itself would never come close to matching the excellent fighters already in service. As such, the P-63 led an "under-the-radar" existence and was fielded primarily by air forces other than the United States.

The P-39 Airacobra was already in production for the USAAF . This unique little aircraft sported a rear-mounted engine turning a three-bladed propeller system via a shaft running under the cockpit floor. With the engine mounted in the rear of the fuselage, the nose assembly was free to fit armament - this coming in the form of a 37mm Oldsmobile M4 cannon firing unobstructed through the propeller hub. Additionally 2 x 12.7mm heavy machine guns were fitted into the engine cowl and synchronized for firing through the spinning propeller blades. This armament was supplemented by the addition of four .30 caliber machine guns - two to a wing. Power was supplied by an Allison-brand V-1710-85 liquid-cooled V-12 engine supplying up to 1,200 horsepower.

Though initially unveiled as a dedicated interceptor, the uniqueness of the aircraft proved much more expensive than the USAAF was interested in and, as such, it provided "suggestions" in an attempt to cut down on costs. One of the biggest changes was in dropping the turbocharger - effectively the backbone of the P-39's performance as an interceptor. This was replaced by a mechanically-based supercharger which didn't provide much in the way of high-altitude performance and the P-39 was doomed as a fighter. As it stood, the P-39 went on to more action in the low-altitude attack aircraft, with most of its success coming from the hands of Soviet pilots utilizing the type through Lend-Lease deliveries. Despite its inherent deficiencies, the P-39 became Bell's most successful production endeavor.

While the P-39 design essentially foundered for what it was intended to be, Bell sought solutions to the design while USAAF interest was still in their favor. The same basic fuselage design and engine (with two superchargers) arrangement was taken and fitted into an enlarged airframe - essentially based on the XP-39E with a laminar flow wing planform, improved supercharger and new Continental I-1430 engine. Three prototypes were ordered with two fitting the base Allison V-1710-47 series engine and one fitting a version of the Rolls-Royce Merlin engine built by Packard as the V-1650 series (Merlins were used in the excellent Supermarine Spitfires and North American P-51 Mustangs). The Packard-engined XP-63 was never to be for these Merlins were earmarked for Mustangs, leaving this prototype to eventually be powered by an Allison V-1710-93 engine. These engines powered a new large four-bladed propeller system. Armament remained faithful to the P-39Q model design with its 37mm nose cannons, 12.7mm heavy machine guns in the engine cowl and an additional 2 x 12.7mm heavy machine guns slung under the wings in pods. The developmental designation was set as XP-63.

Externally, the P-63 remained faithful to the P-39 Airacobra design before it with the exception of its larger overall dimensions. The pilot sat relatively forward along the contoured fuselage in a glazed cockpit featuring the identifiable automobile-style doors of the P39 design. The cockpit was situated just forward of the wing leading edge. Wings were rounded monoplanes with noticeable dihedral. The front of the fuselage was dominated by the large four-bladed propeller system. The propeller was controlled via a shaft running under the cockpit floor and into the rear-mounted Allison engine, this being situated about midway through the fuselage. The empennage was of a standard configuration with a single vertical tail fin and a conventional horizontal plane. The undercarriage was a more-modern tricycle arrangement featuring two main single-wheeled landing gears and a single-wheeled nose gear. The nose gear retracted rearwards under the cockpit floor whilst the main gears retracted inwards towards the fuselage centerline, each system fitted under each wing. When at rest, the P-63 took on a pronounced "front-up" look thanks to its tall nose gear. Overall, she was a fine-looking - albeit unique - aircraft with much of her P-39 pedigree still in place. As mentioned, armament was carried over from the P-39Q model series with some slight alterations in placement and ammunition supply in the P-63.

Despite the XP-63 prototypes not even flying yet - let alone completing any type of worthy evaluation - the USAAF decided to go ahead and order the new P-63 "Kingcobra" fighter line. Deliveries began in October of 1943 and it soon became apparent that the P-63A was still not up to par with the P-51 Mustang series. The USAAF therefore had little use for the aircraft as it stood, leaving the product open for use by allied forces in the fight against Japan and Germany.
Advertisements

The Soviet Union was in dire need of capable fighter aircraft and were already a prime operator of the P-39 series. The P-63 seemed like another good match for the Red arsenal and, with input from Soviet test pilot Andrey G. Kochetkov, the P-63 Kingcobra was modified for the better and ultimately shipped to the Soviet Union from Nome, Alaska, to be used solely against Japanese forces in the East. Despite this "agreement" on the part of the Soviets, P-63 air groups were set up in the West to battle the Germans. The P-63 excelled in the ground attack role, providing for adequate low-flying characteristics and a concentrated dose of lethal armament making them ideal tank busters. Engaging and downing enemy fighters also something of a rarity but still possible. Soviet use of the P-63 amounted to over 72% of all Kingcobras produced, making them the primary operator of the aircraft.

While the Airacobra was spawned into a large number of ever-improving variants, the Kingcobra saw a more restricted production life. The XP-63 represented the first two prototypes with serial numbers 41-19511 and 41-19512 and featured a laminar air flow wing. The XP-63A were two examples intended to fit the Rolls-Royce Merlin and sporting bomb racks. The initial production models became the P-63A of which some 1,725 examples were delivered in blocks 1 through 10.

The XP-63B was a proposed model based on the Merlin-powered XP-63A prototypes. While this arrangement might have proved promising on paper, American Merlin engines were already earmarked for use in production North American P-51 Mustangs. As such, the XP-63B fell to naught.

The P-63C series became the second production Kingcobras. They fitted the Allison V-1710-117 water-injected engine with up to 1,800 horsepower output. Some 1,777 examples were produced of this type.

The P-63D was a one-off design fitting the Allison V-1710-109 (E22) series engine of 1,425 horsepower. A bubble canopy (as opposed to the automotive-style doors) was part of the changes that also included the lengthening of the wings. This model never entered quantitative deliveries for production of all Kingcobras was stopped by this time.

The P-63E was similar to the D-model but sported the original automotive-style doors of the P-39 Airacobra and P-63A and P-63C Kingcobras. The underside fin was extended some and anew propeller were fitted though only 13 examples of this Kingcobra made it out the door. The E-model exhibited a top speed of 408 miles per hour, a cruising speed of 280 miles per hour, a range of 450 miles and a service ceiling of 43,000 feet.

Similarly, only two of the P-63F models were produced, these fitting the Allison V-1710-135 engine and a larger-area vertical fin. the XP-63H was a single conversion attempt based on a modified P-63E and featuring a new engine.

As the case with most of the unwanted airframes seeing service past their worthy lifespans, the P-63 was covered in an overall bright orange paint scheme to be used as manned target aircraft (complete with "kill" lights) and target tugs. These encompassed the RP-63A (100 examples) and RP-63C (200 examples) and RP-63G "Pinball" models (32 examples). RP-63A/C's were based on five P-63A completed production models modified for the role while at least 95 other A-models were modified as such while still on the production lines. These later became known as QF-63As. The RP-63G Pinballs were more dedicated to the flying target role and modified as such. These later became the QF-63G.

At the time of their production, a single P-63 cost American tax payers $48,000 to produce. Over 3,300 Kingcobras were produced - a far cry from the successful venture P-39 Airacobra, that series producing over 9,000 examples.

Despite not making it as the improved Airacobra it was intended to be, the Kingcobra still found a home taking on ground targets. It proved a sound concept in the realm of ground attack and her airframe proved as reliable as her armament proved lethal. The Soviets enjoyed many-a-success with the type as they did with the P-39 series as a whole. In all, the larger Kingcobra proved, at the very least, to be a slight improvement over her predecessor.
Advertisements 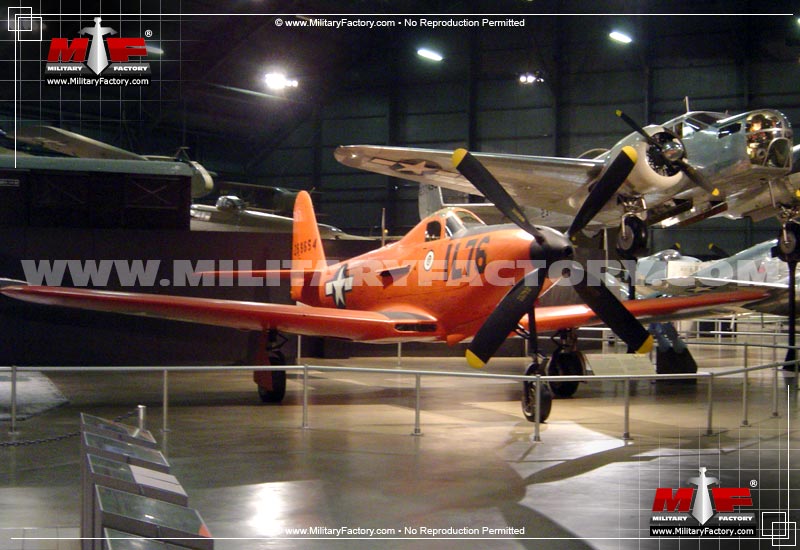 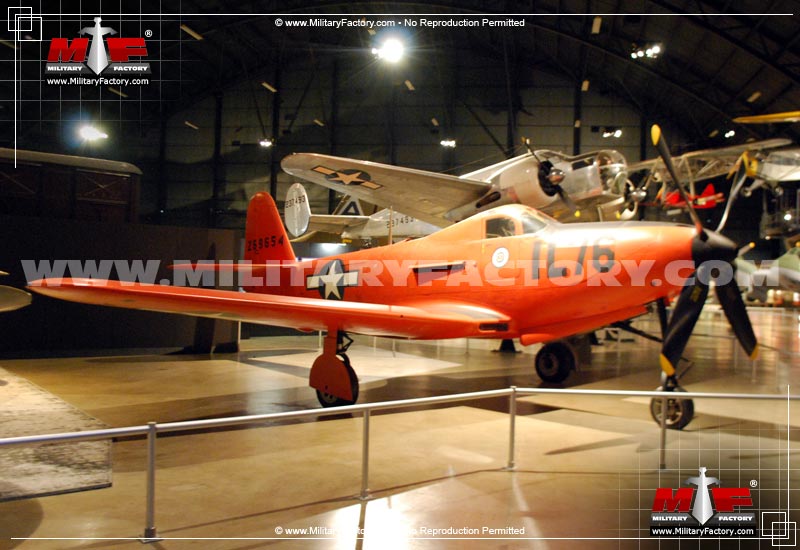 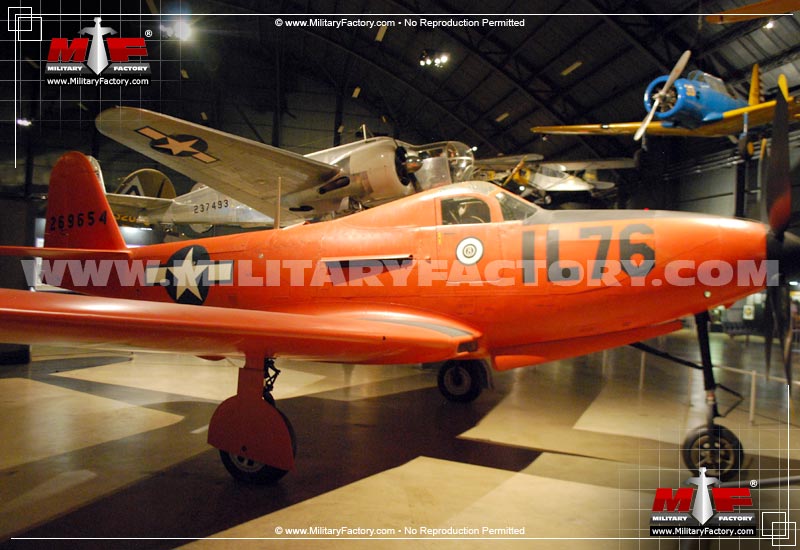 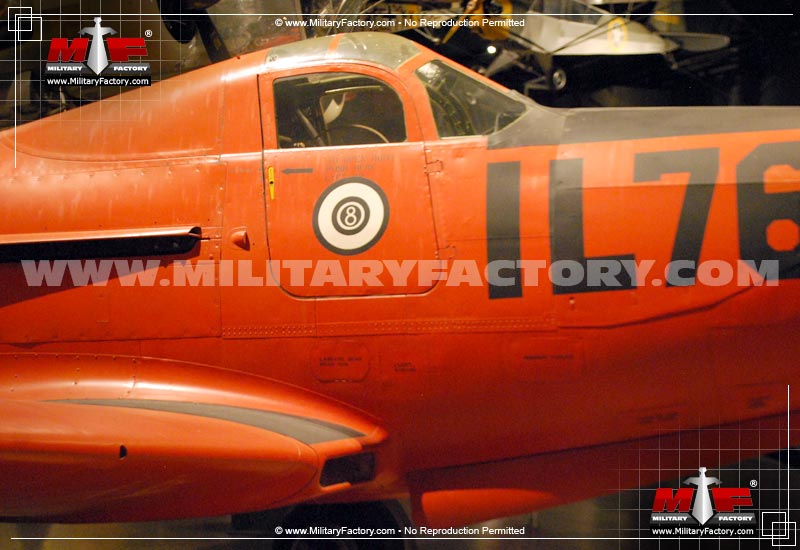 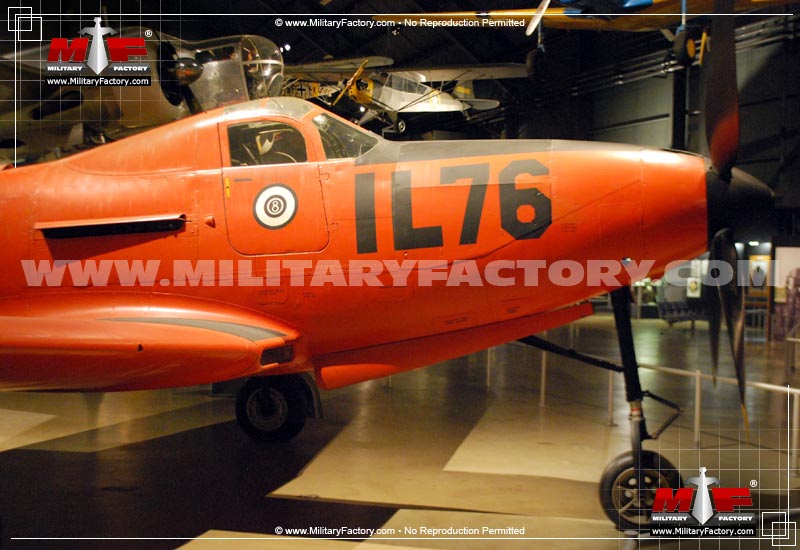 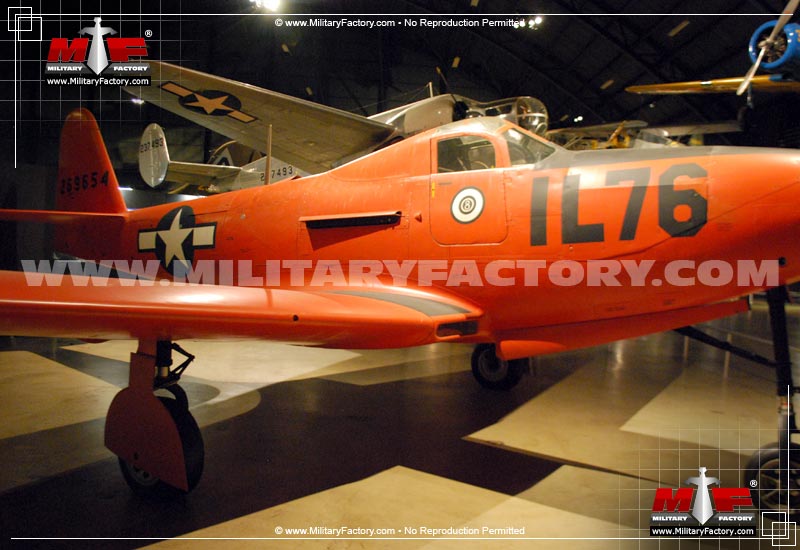 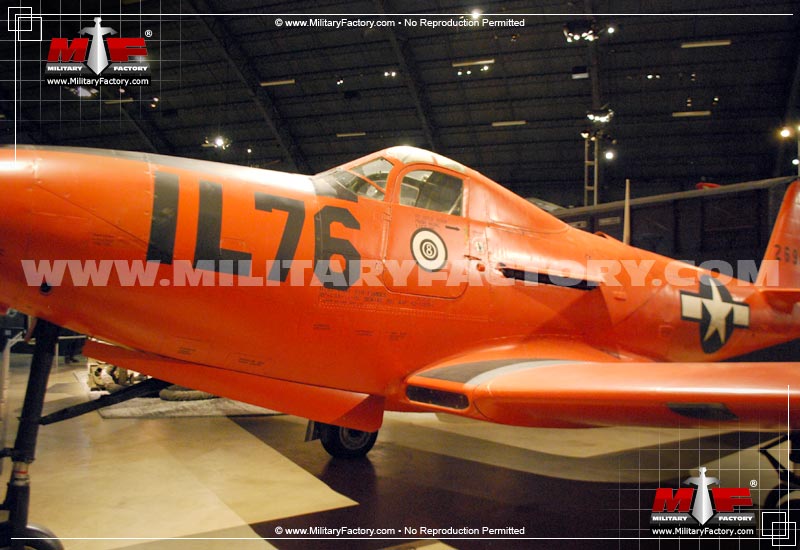 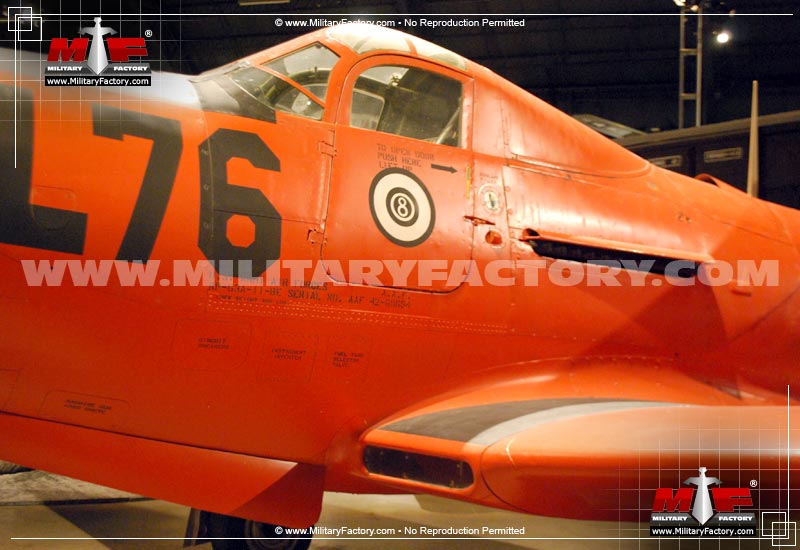 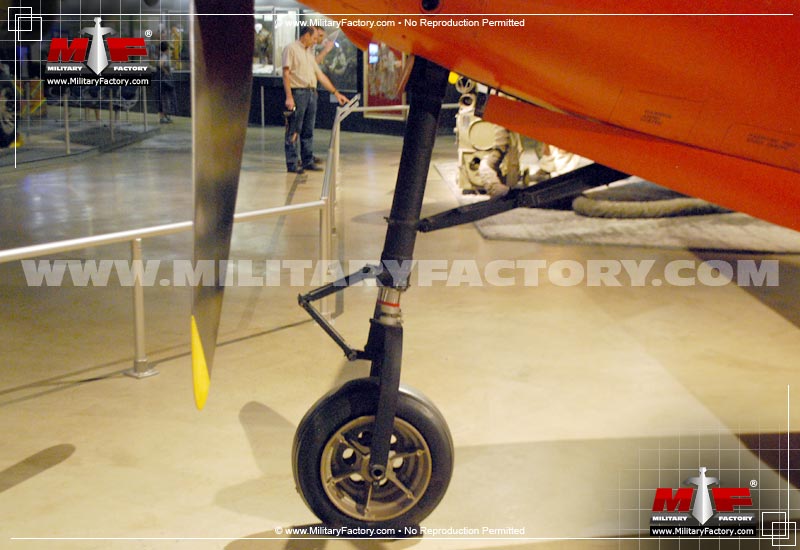 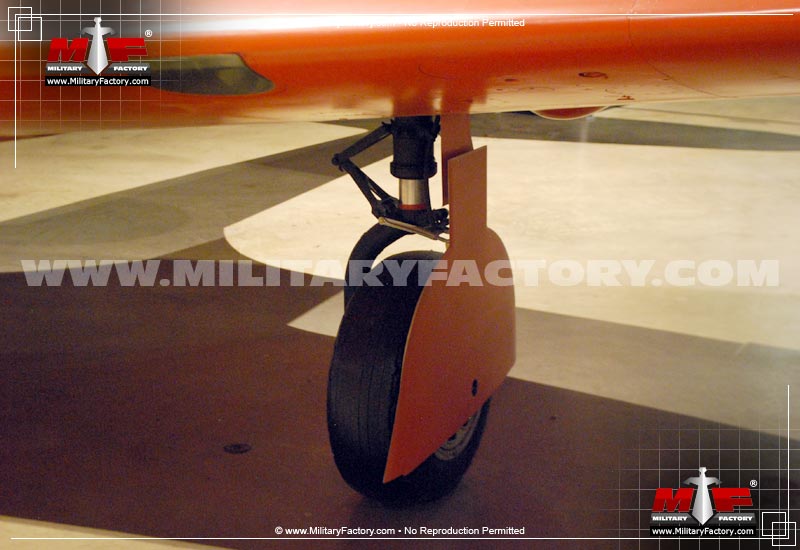 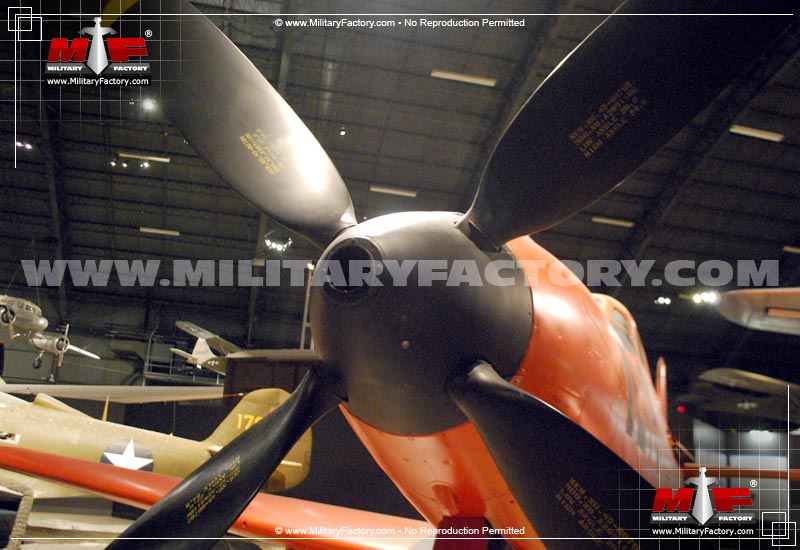 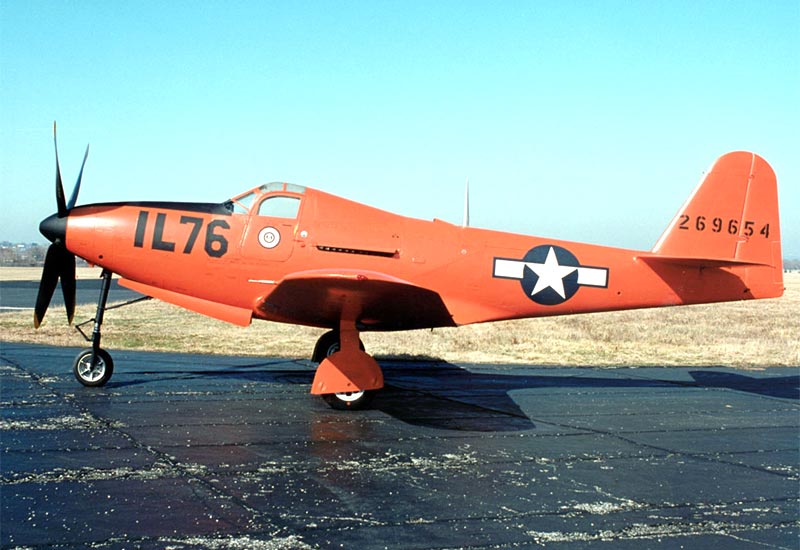 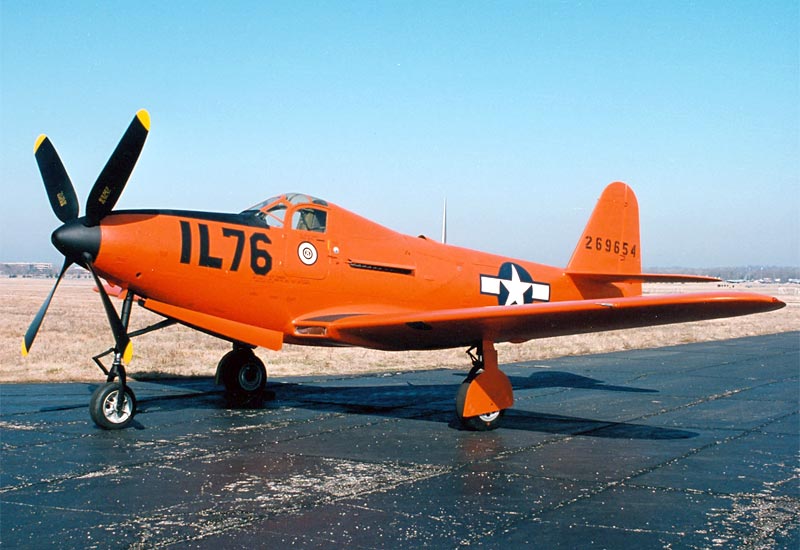 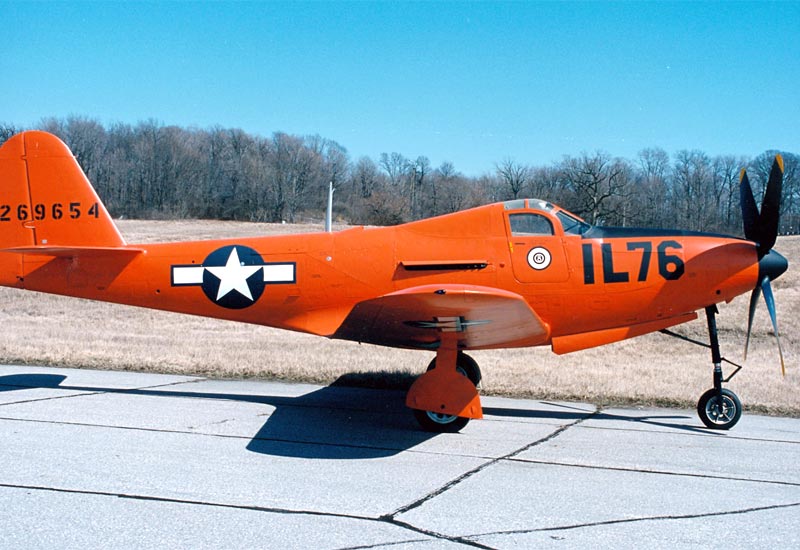 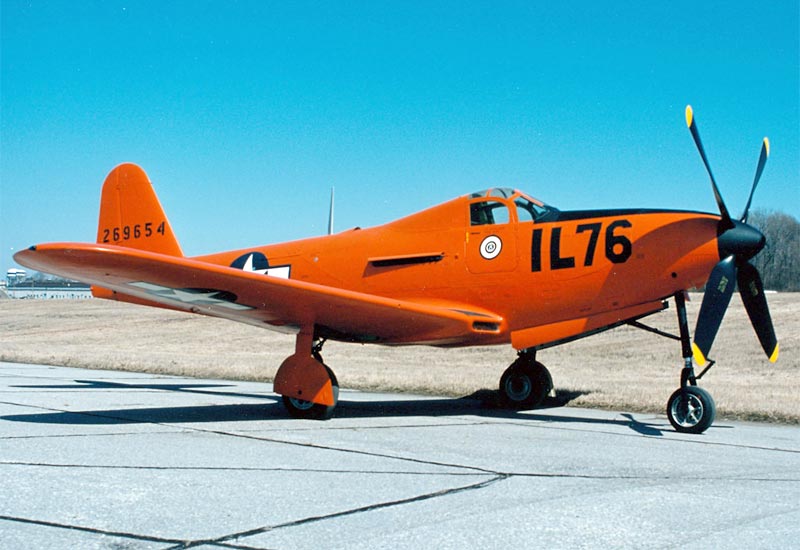 Aviation developments of similar form and function, or related to, the Bell P-63 Kingcobra...