The Japanese Navy Mitsubishi A6M Zero carrier-borne fighter became synonymous with the Japanese military commitment over Asia and the Pacific during World War 2.

Authored By: Dan Alex | Last Edited: 05/25/2022 | Content ©www.MilitaryFactory.com | The following text is exclusive to this site. 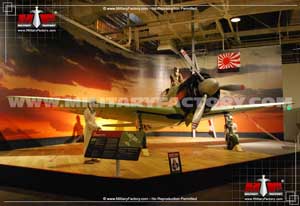 The Mitsubishi A6M "Rei-sen" was the primary naval fighter of the Japanese Empire heading into World War 2. The aircraft was recognized by its pilots as the "Zero-sen" based on the Imperial Year calendar (1940 at the time). The Allies eventually adopted the "Zero" name as the type's nickname while the official Allied codename for the became "Zeke". The A6M received much attention in the early stages of the war in the Pacific where it became the first naval aircraft to be able to best any of its land-based counterparts through a combination of speed, maneuverability and range. Mitsubishi Heavy Industries of Japan produced some 10,939 examples from 1940 on. The series survived the whole of the war up to the Japanese surrender of September 1945, its worth having been proven over five years of conflict.

Origins of the A6M lay in pre-war 1937 by which time Mitsubishi had just delivered the A5M. The A5M was a monoplane fighter developed for the Imperial Japanese Navy and incorporated a streamlined fuselage, low, forward-set monoplane wings and a single-seat cockpit. While 1,094 of the type were taken into inventory, the type still held some old-fashioned design elements which rendered it an obsolete-appearing aircraft by World War 2 standards. It held an open-air cockpit for the pilot with a raised fuselage spine and fixed, spatted main landing gear legs. Visibility out of the cockpit was poor and armament centered on a pair of 7.7mm Type 89 series machine guns.

With these limitations in mine, the Imperial Japanese Navy pushed both Mitsubishi and Nakajima for a new carrier-borne naval fighter of greater capability - particularly range to prove important over the vast spans of Pacific Ocean in the upcoming Japanese campaign. Also, the hitting power of the aircraft was to be improved by implementation of cannon armament coupled to machine guns for a formidable one-two punch. Due to the space on Japanese carriers, the aircraft would also have to be relatively compact and feature folding wing assemblies for storage. The IJN sought particular specifications out of their new mount: a maximum speed of 310 miles per hour and a climb rate of 9,850 feet reached in 3.5 minutes.

Nakajima engineers eventually found the requirements too restrictive and did not submit a formal design, leaving Mitsubishi to head the project. Their design (attributed to Jiro Horikoshi) became a smoothly contoured monoplane wing fighter with a fully-enclosed cockpit and wholly retractable landing gear legs. The engine was fitted to a compartment at the front of the fuselage in the usual way and the wings sat ahead of midships. Visibility was slightly improved over that as found on the A5M as the fuselage spine was lowered into the fuselage shape. The canopy was of greenhouse style and still provided for adequate situational awareness for the pilot. The wingtips could fold upwards for a reduced wingspan in storage. One of the qualities of the Mitsubishi design that would prove both good and bad was its lack of armoring for the major components of the aircraft - cockpit, engine and fuel tanks (as well as self-sealing fuel tanks). While the lack of this armor protection made for a lighter, and therefore more agile, aircraft, it decidedly reduced the survivability of both crewman and airframe in a fight against equal or superior fighters. The Mitsubishi design was also an excellent turning machine, which gave it an edge against contemporaries for a time. Armament was a mix offering of 2 x 20mm cannons in the wings and 2 x 7.7mm machine guns in the engine cowling. Power was from a Nakajima radial piston engine driving a three-bladed propeller.©MilitaryFactory.com
Advertisements

The initial prototype was unveiled on March 16th, 1939 and achieved first flight on April 1st of that year. On September 14th, the aircraft was officially adopted by the IJN as its new standardized carrier-based fighter mount. Initial aircraft were powered by a Mitsubishi engine (Zuisei line) until a decided shift was made towards a Nakajima product. The Mitsubishi aircraft was adopted as the A6M "Zero-sen" Type 00 Fighter and saw its first service in July of 1940 against the Chinese. It quickly proved itself the finest fighter in the world and bested nearly all opponents in the Asian and Pacific theaters and certainly alerted observers in Washington, D.C. and elsewhere but nothing was done to further investigate the type.

Production of A6Ms eventually eclipsed all other Japanese aircraft of the war. Mitsubishi was its maker but additional manufacture was handled through competitor Nakajima who produced over 6,200 examples alone. Additional production was seen from Hitachi and Sasebo and included a floatplane derivative which also saw extensive service in the war.

By the time of the Japanese surprise attack on Pearl Harbor, Hawaii, on December 7th, 1941, the IJN managed a stable of some 400 Zero fighters and the carrier groups to field them. Zeros took part in the devastating attacks which rendered many USN warships useless or damaged and thrust the United States into a formal war declaration against the Empire of Japan. From there on, the A6M was fielded in all major Japanese campaigns and retained its air dominance heading into 1942 and 2 x 132lb bombs were added for the ground strike role. The aircraft now deserved the respect of Washington observers and its capabilities were fully noticed.

It was not until the middle of 1942 that the Allies managed to capture an intact A6M and study it from the inside out back in the United States. It was from this work that the weaknesses of the Mitsubishi aircraft were soon discovered and new counter tactics arranged for Allied pilots. The lack of armoring proved a critical design flaw in the Zero and Allied pilots would work at exploiting this fatal flaw. Additionally, the United States Navy was now turning to more modern, capable fighting mounts in their F6F Hellcats and F4U Corsairs replacing outgoing frontline types like the F4F Wildcats. The turning point in the early stages of the Pacific war then came at the Battle of Midway in June of 1942 where these new American fighters squared off against incoming waves of Zeros and earned a tremendous victory in the process. The Americans benefitted from armoring of critical components, improved weaponry and tactics and increased performance from dominant engines. Against this, the Zero had now met its official match.

From 1943 onwards, the Zero proved a far lesser, more vulnerable foe than seen in the early stages of the war. A "definitive" Zero was produced as the A6M8 which incorporated a Nakajima Kinsei engine of 1,560 horsepower but the arrival of this variant proved a moot addition. Tide had shifted away from the Japanese Empire and for the Allies and territorial losses mounted into 1945. The Zero was eventually relegated as a carrier for suicidal airmen in the kamikaze strikes that followed. These were outfitted with 1 x 550lb bombs for maximum carnage.

Operators beyond the Imperial Japanese Navy were few and included Thailand. Post-war use was seen by China (Republic of China) and Indonesia. Several airframes exist in flyable form today and many have survived as museum showpieces. Some have had screen time in several motion pictures to date.©MilitaryFactory.com
Note: The above text is EXCLUSIVE to the site www.MilitaryFactory.com. It is the product of many hours of research and work made possible with the help of contributors, veterans, insiders, and topic specialists. If you happen upon this text anywhere else on the internet or in print, please let us know at MilitaryFactory AT gmail DOT com so that we may take appropriate action against the offender / offending site and continue to protect this original work.
Advertisements

SYNCHRONIZED / INTERRUPTOR GEAR Automatic weapons are synchronized to fire through the spinning propeller blades via special mechanical gear arrangement.
FOLDING WING(S) Mainplanes are designed to fold, improving storage on land and at sea.
HIGH-SPEED PERFORMANCE Can accelerate to higher speeds than average aircraft of its time.
HIGH-ALTITUDE PERFORMANCE Can reach and operate at higher altitudes than average aircraft of its time.
EXTENDED RANGE PERFORMANCE Capability to travel considerable distances through onboard fuel stores.
SUPER PERFORMANCE Design covers the three all-important performance categories of speed, altitude, and range.
MARITIME OPERATION Ability to operate over ocean in addition to surviving the special rigors of the maritime environment.
BAILOUT PROCESS Manual process of allowing its pilot and / or crew to exit in the event of an airborne emergency.
ENCLOSED CREWSPACE(S) Features partially- or wholly-enclosed crew workspaces.
RETRACTABLE UNDERCARRIAGE Features retracting / retractable undercarriage to preserve aerodynamic efficiency.

(Showcased performance specifications pertain to the Mitsubishi A6M5 Rei-sen (Zero) production variant. Performance specifications showcased above are subject to environmental factors as well as aircraft configuration. Estimates are made when Real Data not available. Compare this aircraft entry against any other in our database or View aircraft by powerplant type)
STANDARD:
2 x 20mm Type 99-1 automatic cannons in wings (one gun to a wing member).
2 x 7.7mm Type 97 machine guns in engine cowling synchronized to fire through the spinning propeller blades. 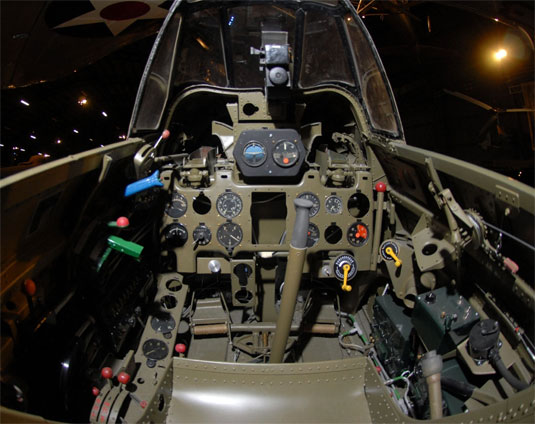 General Assessment
Firepower
Performance
Survivability
Versatility
Impact
Values are derrived from a variety of categories related to the design, overall function, and historical influence of this aircraft in aviation history.
Overall Rating
The overall rating takes into account over 60 individual factors related to this aircraft entry.
84
Rating is out of a possible 100 points.
Relative Maximum Speed
Hi: 400mph
Lo: 200mph
This entry's maximum listed speed (354mph). 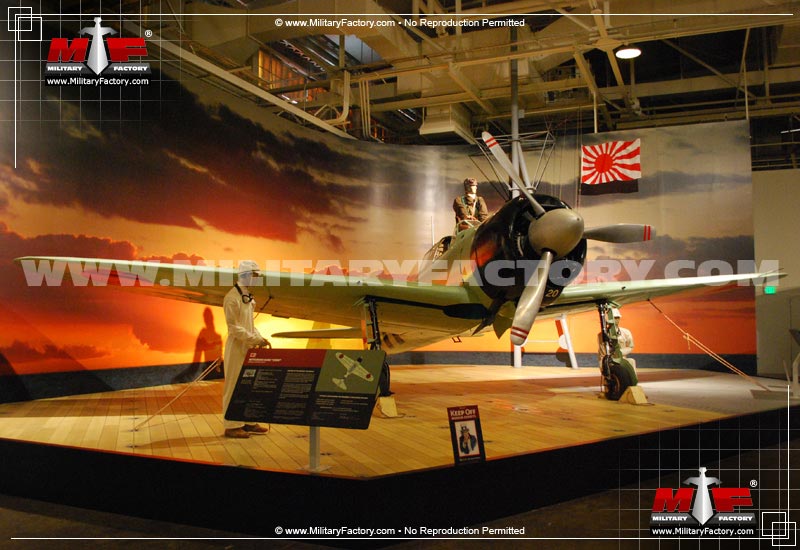 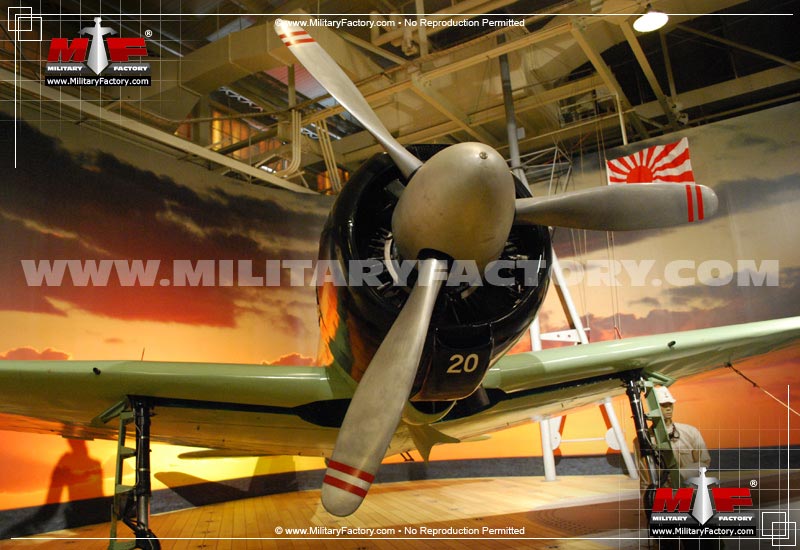 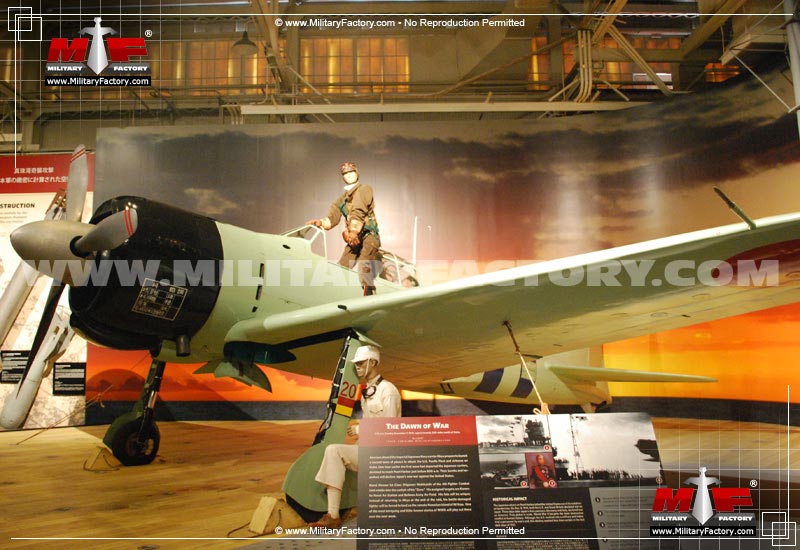 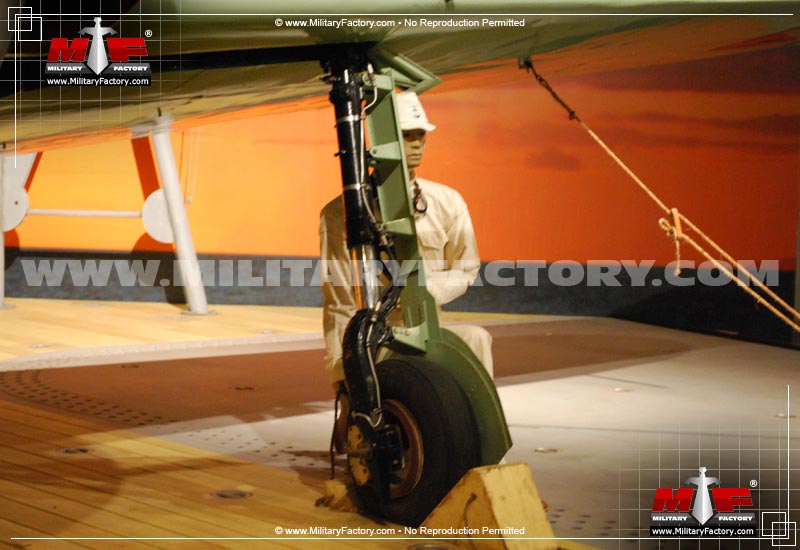 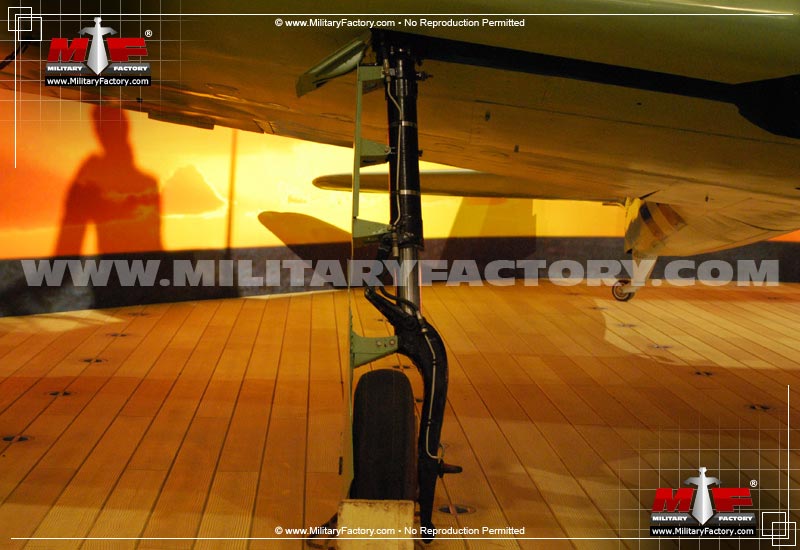 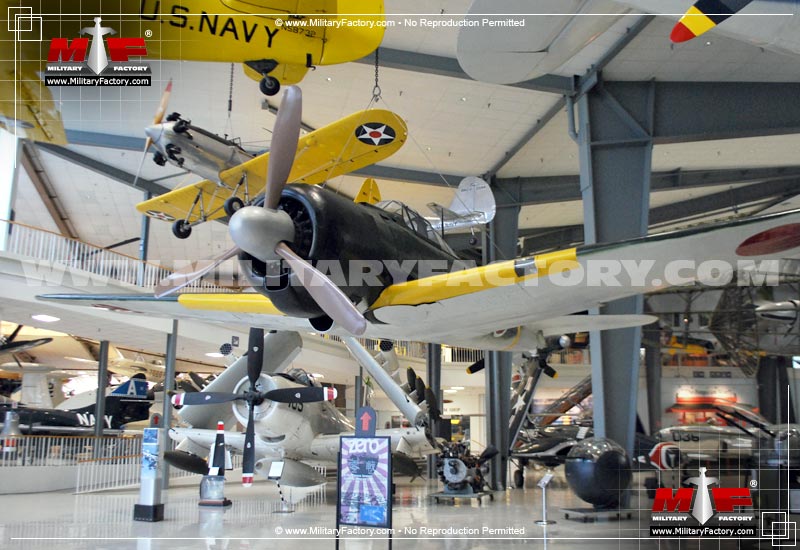 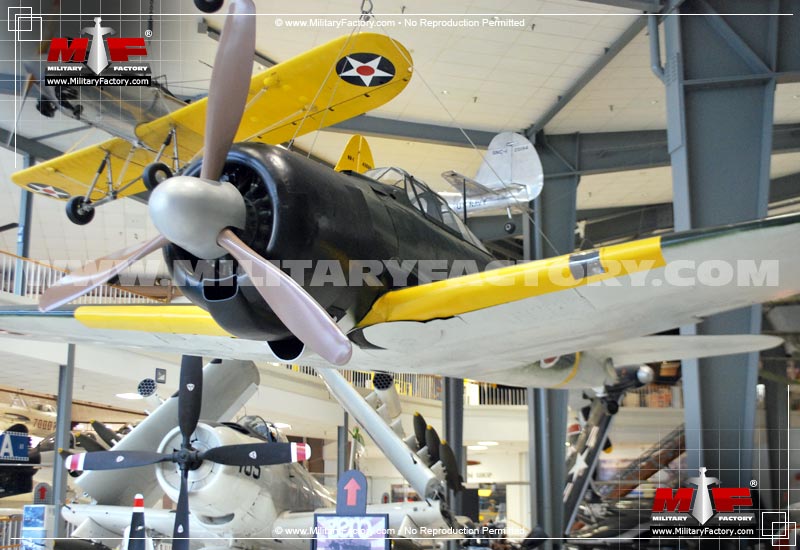 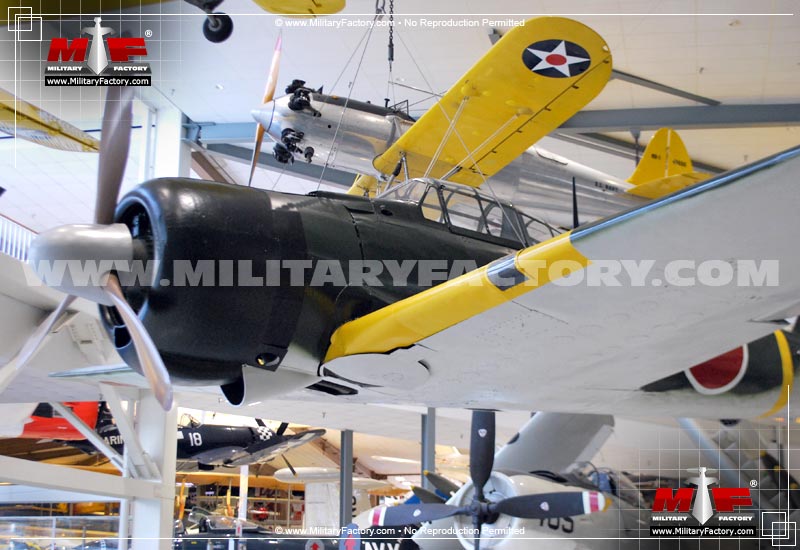 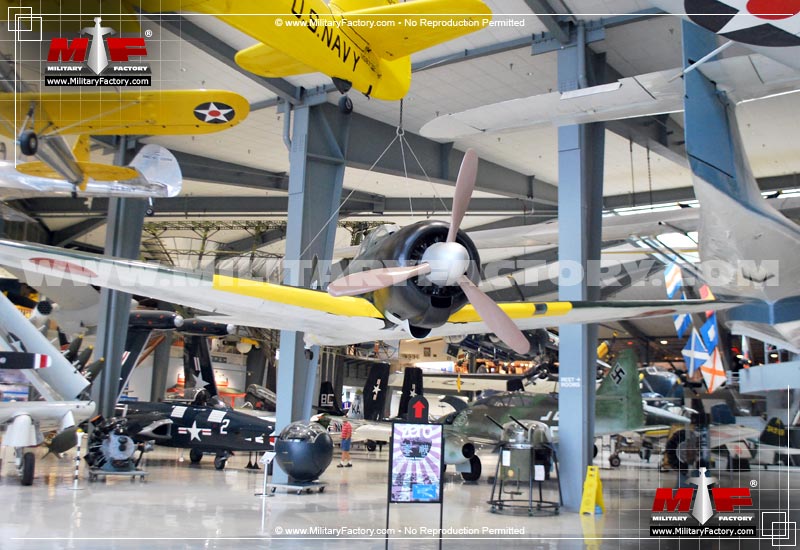 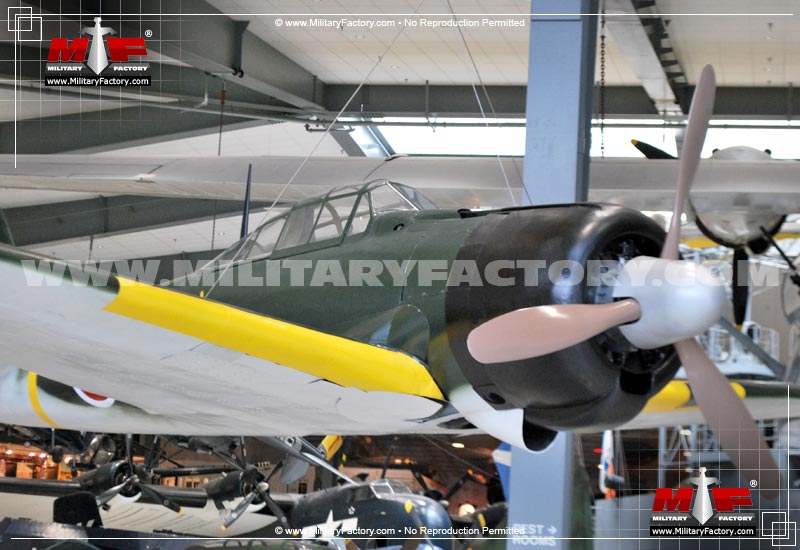 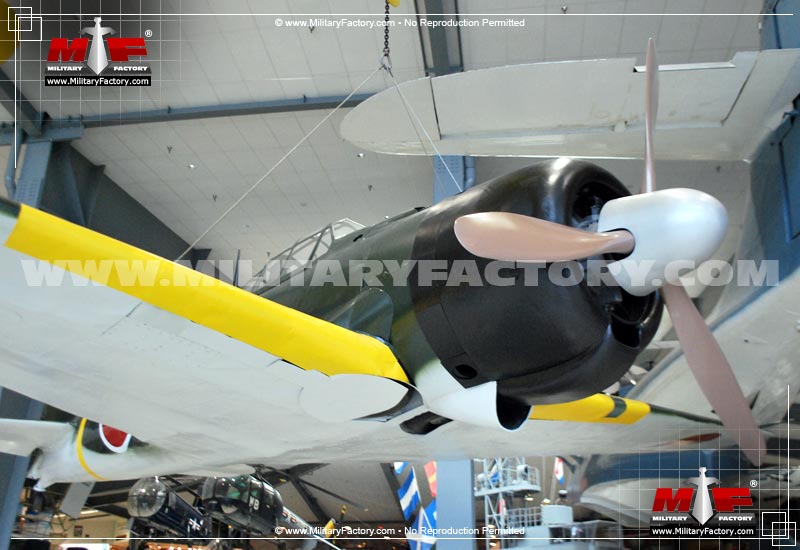 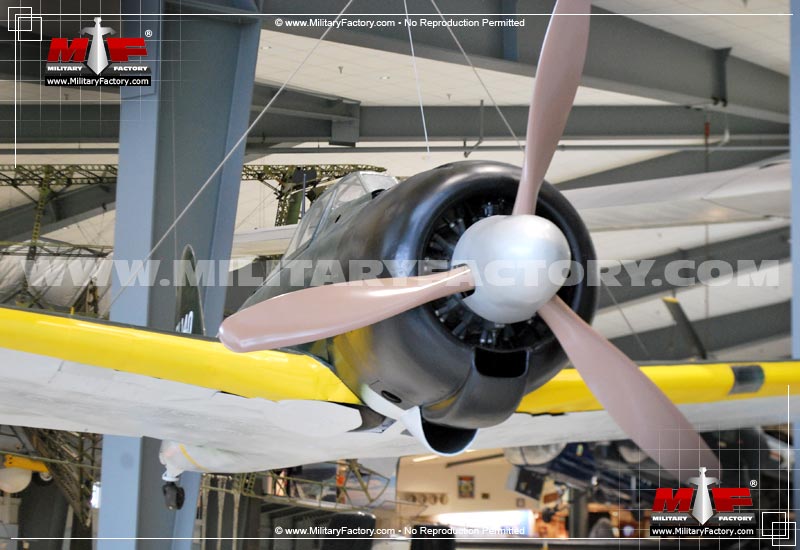 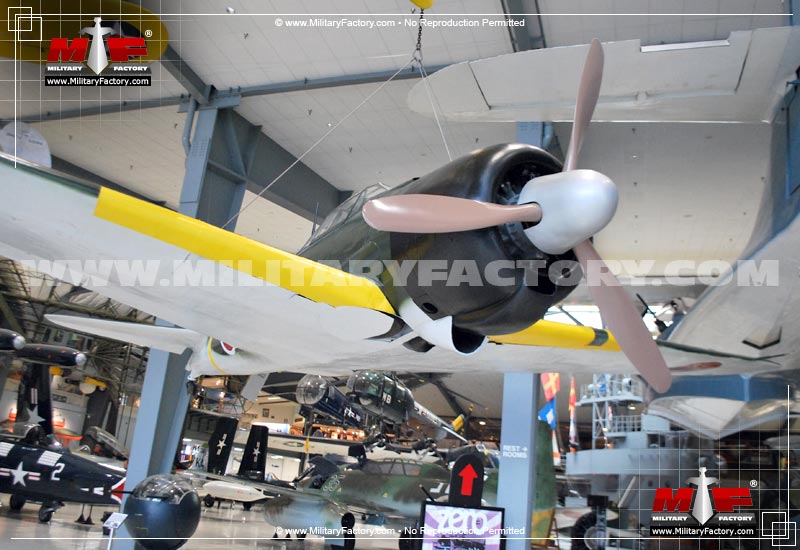 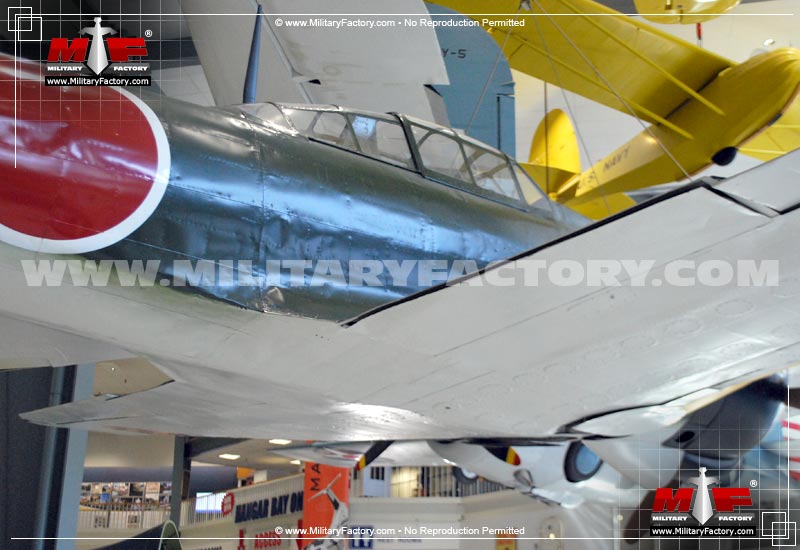 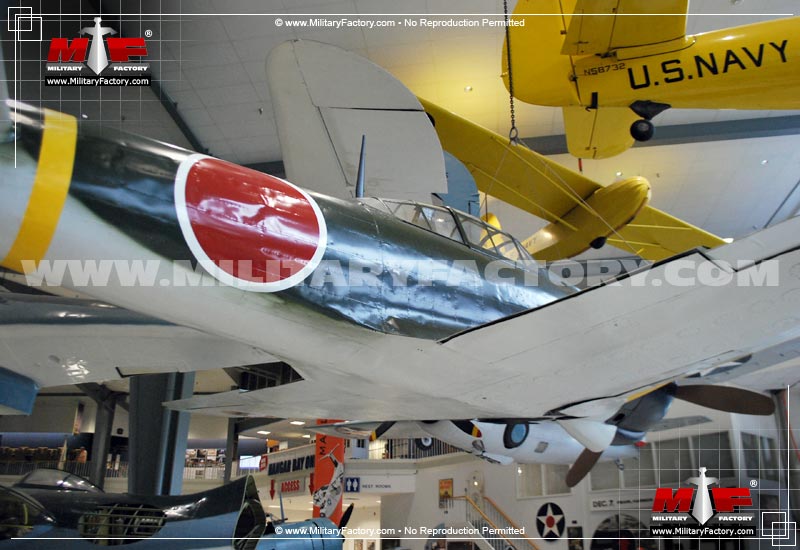