The Heinkel He P.1080 was to be a ramjet-powered interceptor serving the Luftwaffe in the late-World War 2 years.

Authored By: Staff Writer | Last Edited: 08/29/2022 | Content ©www.MilitaryFactory.com | The following text is exclusive to this site. 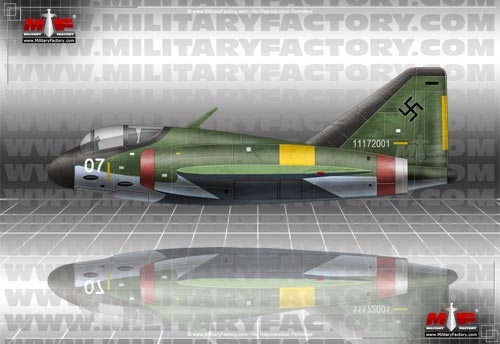 Towards the end of World War II (1939-1945), the desperate Germans invested heavily in what came to be known generically in modern-speak as "secret weapons" or "wonder weapons" - designs intended to change the outcome of the war in Germany's favor. As 1944 saw considerable changes in the German war effort and - by early 1945 - victory in Hitler's years-long war across Europe and Africa was very much in doubt. As such, the Luftwaffe sought all manner of game-changing aircraft that could help stave off defeat and many of the usual industry players (such as Heinkel, Dornier, and Junkers) threw their hat into the ring in an effort to sway the favor of authorities.

The Heinkel He P.1080 was a product of the period, intended as a ramjet-powered fighter / bomber-interceptor / night-hunter. This radar-equipped development would have seated a single crewman and housed twin ramjet engines to achieve exceptional speed when responding to an incoming wave of Allied bombers. By this point in the war, the Allied bomber stood as the single-greatest threat to German war-making capabilities as both a day and night campaign wreaked havoc in aiding the Allied push into places like Rome, Paris, and - ultimately - Berlin itself.

The general design of the interceptor was largely conventional: the pilot was positioned at the extreme forward end of the fuselage with a large-area vertical tail fin at the opposite end. Mainplanes were swept-back appendages mounted near midships and clipped at their tips. Between a the mainplanes and fuselage were the engine compartments, each featuring a Lorin-Rohr ramjet component. Rounded intakes were set to either side of the cockpit with circular exhaust ports positioned aft in a simple "straight-through" engine design requiring little to no ductwork within.

Because air-breathing ramjet engines were only useful under power after exceeding a certain speed, the P.1080 would have relied on no fewer than four solid-fueled booster rockets temporarily generating 2,200lb of thrust from each unit (other similar designs of the period were trialed by launching mid-air from "motherships" to achieve the same result). Once expended, the rockets were to be jettisoned. Once under its own power, and coupled with a sleek, aerodynamic airframe complete with swept-back mainplanes, the fighter could achieve considerable straightline speeds reaching supersonic levels.

Similarly, a wheeled undercarriage that would have been used for initial ground-running actions was to be jettisoned soon after take-off - landing accomplished by way of simple belly skid in an open, leveled field (ala the Messerschmitt Me 163 "Komet" rocket-powered bomber-interceptor).

Armament was to be the usual Luftwaffe late-war battery of 2 x 30mm MK 108 internal automatic cannons - the pairing suitable for bringing any Allied bomber down in a single burst. Beyond this, the aircraft was to be equipped with radar for bomber-hunting at night.

Dimensions included a length of 26.9 feet with a wingspan of 29.2 feet. Estimated maximum speed was 620 miles-per-hour.

As it stood, the P.1080 interceptor did not advance beyond its paper stage, joining a myriad of other designs to fall to the same fate before the end of the war in Europe in May 1945. The war, as a whole, ended in August of that year with the capitulation of Japan.©MilitaryFactory.com
Note: The above text is EXCLUSIVE to the site www.MilitaryFactory.com. It is the product of many hours of research and work made possible with the help of contributors, veterans, insiders, and topic specialists. If you happen upon this text anywhere else on the internet or in print, please let us know at MilitaryFactory AT gmail DOT com so that we may take appropriate action against the offender / offending site and continue to protect this original work.
Advertisements

(Showcased performance specifications pertain to the base Heinkel He P.1080 production variant. Performance specifications showcased above are subject to environmental factors as well as aircraft configuration. Estimates are made when Real Data not available. Compare this aircraft entry against any other in our database or View aircraft by powerplant type)
PROPOSED:
2 x 30mm MK 108 internal automatic cannons in lower forward fuselage. 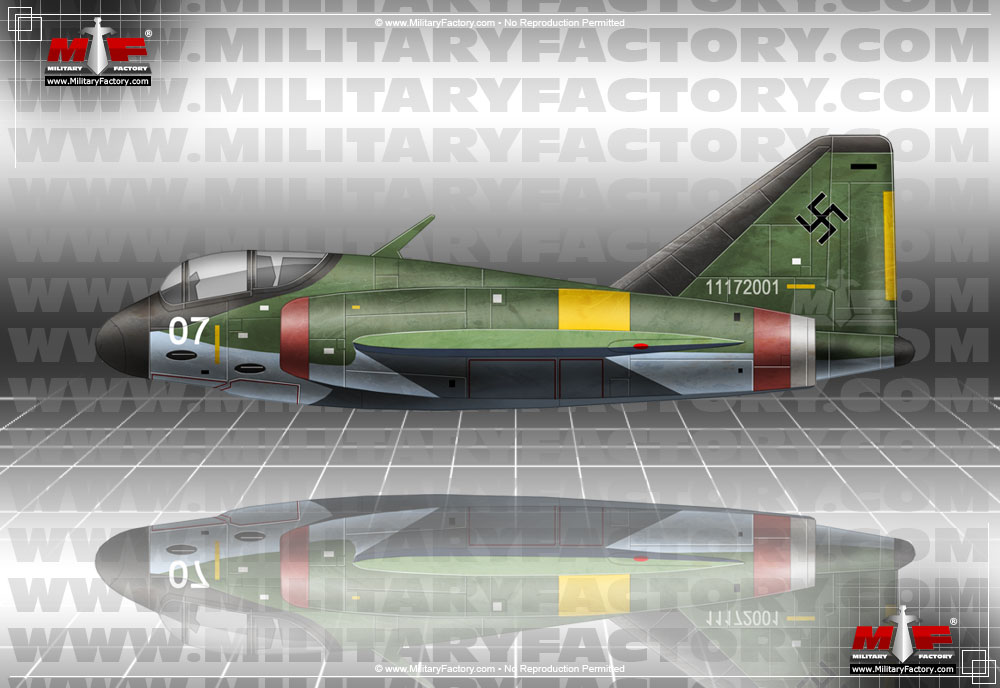