The Messerschmitt P.1110 Ente canard-equipped jet fighter was dropped in favor of more conventional designs before the end of World War 2.

Authored By: Staff Writer | Last Edited: 08/25/2022 | Content ©www.MilitaryFactory.com | The following text is exclusive to this site. 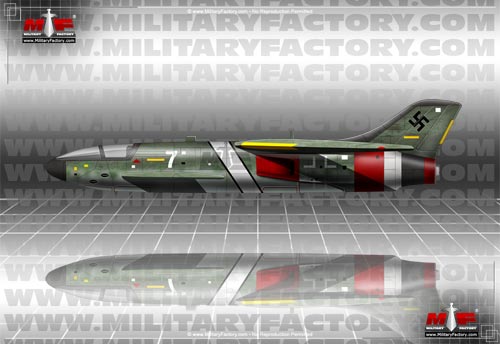 Of all of the German aero-concerns vying for top contracts during World War 2 (1939-1945), Messerschmitt led the way ahead of Blohm und Voss and Focke-Wulf in terms of "paper airplane" designs - revealing no less than forty for their part in the grand conflict. The P.1110 "Ente" was one of two proposed aircraft projects related to the overarching "P.1110" label that included the P.1110/II detailed elsewhere on this site. Like The P.1110/II before it, the P.1110 Ente ("Duck") was for a single-seat, single-engine requirement intended for the Luftwaffe as the war situation for Germany continued to worsen in 1945-1945.

The P.1110/II adopted a more conventional monoplane arrangement unlike the Ente which was to utilize a "double-wing" configuration involving canards ahead of the mainplane members. The canards, or foreplanes, were to be set along the lower forward sides of the fuselage with the mainplanes raised towards the dorsal line further aft. All wings would be given sweepback to better contend with high-speed flight. The double-wing approach would then satisfy control in low-level, low-speed flight envelopes in turn.

The pilot's position was commanding with a largely unobstructed canopy set over his position at the extreme nose of the aircraft. A single vertical fin would be featured well-aft. Internally, power would come from a single HeS 011 air-breathing turbojet engine embedded within the aft-section of the tubular fuselage, exhausting under the tail fin at the aircraft's extreme trailing end. Air intakes were positioned at the rear sides of the fuselage.

Armament, presumably 4 x 30mm Mk 108 automatic cannon systems, would be buried in pairs at each side of the forward fuselage - behind the cockpit side walls and ahead of the foreplanes.

Known estimates of the Ente included a running length of 31.9 feet and a proposed maximum speed of 620 miles-per-hour.

As the machine was never prototyped, no further data on the design was collected before war's end in Europe come May 1945. Additionally, the company decided to further the P.1110/II instead for Germany's Emergency Fighter Program (EFP). In either case, the aircraft were not evolved beyond the drawing board.©MilitaryFactory.com
Note: The above text is EXCLUSIVE to the site www.MilitaryFactory.com. It is the product of many hours of research and work made possible with the help of contributors, veterans, insiders, and topic specialists. If you happen upon this text anywhere else on the internet or in print, please let us know at MilitaryFactory AT gmail DOT com so that we may take appropriate action against the offender / offending site and continue to protect this original work.
Advertisements

(Showcased performance specifications pertain to the Messerschmitt P.1110 Ente production variant. Performance specifications showcased above are subject to environmental factors as well as aircraft configuration. Estimates are made when Real Data not available. Compare this aircraft entry against any other in our database or View aircraft by powerplant type)
PROPOSED:
4 x 30mm MK 108 internal automatic cannons in forward fuselage sides (two guns to a side). 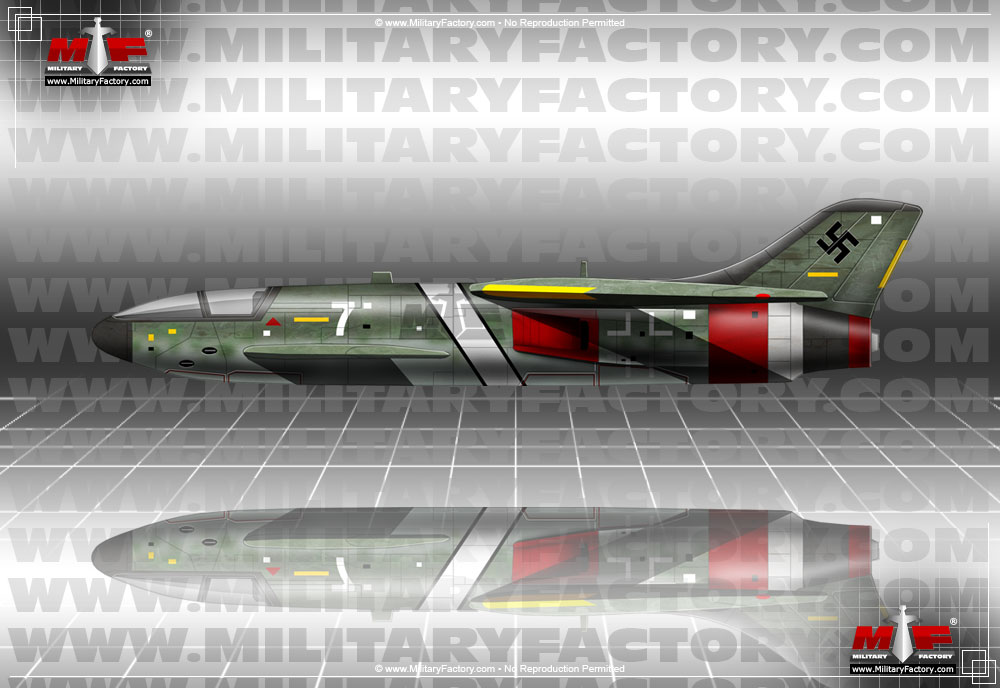 Aviation developments of similar form and function, or related to, the Messerschmitt Me P.1110 Ente (Duck)...