The Curtiss P-1032-7 jet fighter led a series of four proposals directed at the United States Army Air Forces in the latter stages of World War 2.

Authored By: Staff Writer | Last Edited: 08/08/2022 | Content ©www.MilitaryFactory.com | The following text is exclusive to this site. 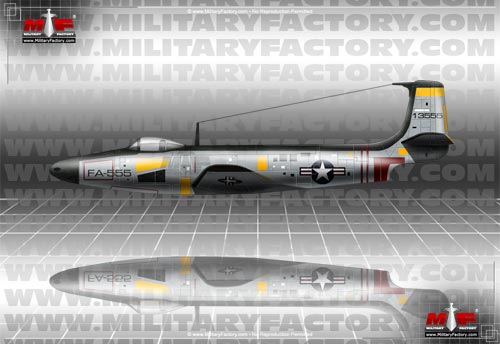 In February of 1944, with the Allied victory in World War 2 (1939-1945) still in doubt and the turbojet engine clearly becoming the future of aerial warfare, the Curtiss Aeroplane Company pushed a series of advanced fighter designs for possible acceptance by the United States Army Air Forces (USAAF). The first of a series of four total designs became the "P-1032-7", a project fighter featuring a single turbojet engine installation for the required power and performance. While the type was not furthered beyond its paper stage, it offers an intriguing look into the direction of American fighter design in the latter war years - particularly as the jet engine is concerned.

At its core, the Curtis P-1032-7 was a single-seat, single-engine monoplane fighter heavily armed and built around performance. The fuselage was made as slender as possible, seating the pilot aft of a lengthened nosecone assembly. A lightly-framed, two-piece canopy would be used to offer the best out-of-cockpit vision possible. The nose assembly housed a collection of 4 x 20mm automatic cannons, giving the potential fighter a most potent frontal punch against any German (or later, Soviet) adversary of the day. The mainplanes were set at midships and were of tapering, straight design with clipped tips. Its mounting was low with noticeable dihedral (upwards angle) towards the wing tips. The tail unit would rely on a single rudder fin with low-mounted horizontal planes to round out the control surfaces scheme for the jet. A modern tricycle (wheeled and retractable) undercarriage would be fitted for ground-running actions.

Taken as a whole, the P-1032-7 was an impressive fighter proposal on paper. Heavily-armed and potentially of high-performance, the jet fighter would have been a considerable addition to the stable of the massive USAAF as the war years seemingly dragged on, potentially into 1946.

Internally, the aircraft was to be powered by only a single air-breathing, fuel-thirsty turbojet engine of unknown make or model - those this eventually was to become the famous General Electric (Allison) J35 which went on to see some 14,000 units manufactured and powering such classic period types as the North American FJ-1 "Fury", Northrop F-89 "Scorpion", and the Republic F-84 "Thunderjet". Since the P-1032-7's armament was concentrated in the nose, this meant that the air breathing aspect of the engine would be satisfied through intakes embedded at each wing leading edge - requiring duct work funneling the fresh air through the wing into the middle-aft section of the fuselage. Beyond this, however, the design of the Curtiss fighter was largely conventional by late-war standards.

Dimensions of the proposed design included a running length of 40.10 feet with a wingspan measuring 36.8 feet. Gross weight was estimated at 13,000lb with an overloaded weight up to 15,500lb.

While pure estimates, the P-1032-7 was to have a maximum speed near 600 miles-per-hour (under ideal conditions) up to altitudes beyond 40,000 feet. Range was out to 1,200miles as the airframe could accept a pair of underwing jettisonable fuel tanks for extended flights.

At any rate, nothing became of the Curtiss P-1032-7. The subsequent P-1032-9 switched to a twin-engine layout with underslung wing engines (similar to the German wartime Messerschmitt Me 262 "Schwalbe" fighter) and the P-1032-11 combined the power output of an early-form turboprop engine with that of a turbojet. The P-1032-13 reverted back to a more traditional twin-jet arrangement though these were closely paired under the fuselage.©MilitaryFactory.com
Note: The above text is EXCLUSIVE to the site www.MilitaryFactory.com. It is the product of many hours of research and work made possible with the help of contributors, veterans, insiders, and topic specialists. If you happen upon this text anywhere else on the internet or in print, please let us know at MilitaryFactory AT gmail DOT com so that we may take appropriate action against the offender / offending site and continue to protect this original work.
Advertisements

HIGH-SPEED PERFORMANCE Can accelerate to higher speeds than average aircraft of its time.
HIGH-ALTITUDE PERFORMANCE Can reach and operate at higher altitudes than average aircraft of its time.
PILOT / CREW EJECTION SYSTEM Assisted process of allowing its pilot and / or crew to eject in the event of an airborne emergency.
CREWSPACE PRESSURIZATION Supports pressurization required at higher operating altitudes for crew survival.
ENCLOSED CREWSPACE(S) Features partially- or wholly-enclosed crew workspaces.
RETRACTABLE UNDERCARRIAGE Features retracting / retractable undercarriage to preserve aerodynamic efficiency.

(Showcased performance specifications pertain to the base Curtiss P-1032-7 production variant. Performance specifications showcased above are subject to environmental factors as well as aircraft configuration. Estimates are made when Real Data not available. Compare this aircraft entry against any other in our database or View aircraft by powerplant type)
PROPOSED:
4 x 20mm internal automatic cannons embedded in the nose assembly. 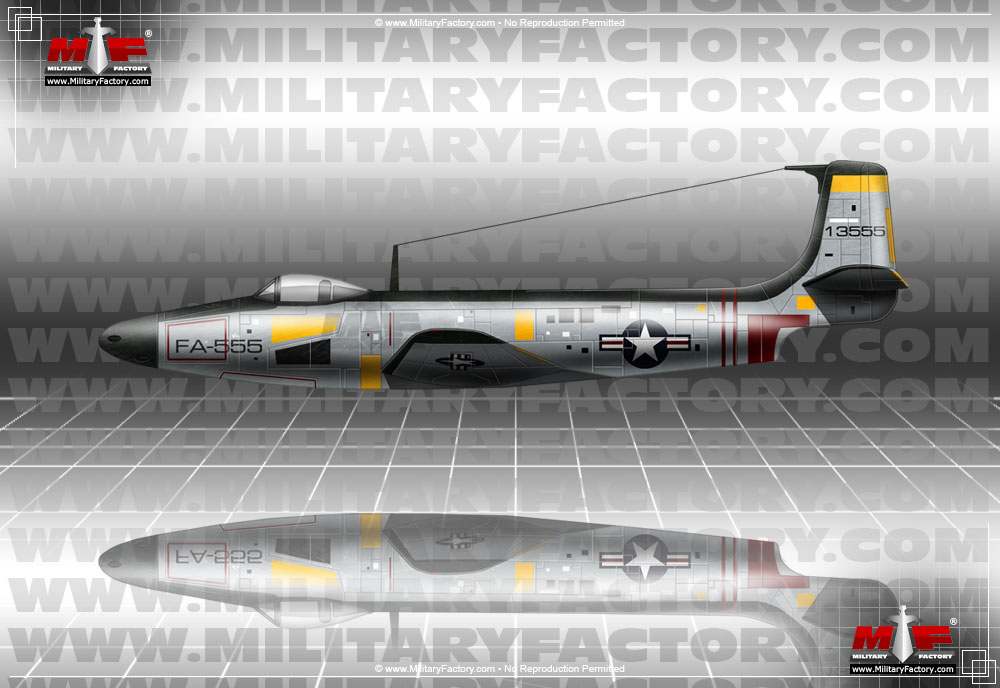