The McDonnell Model 40 comprised three fighter forms for a USN carrierborne day fighter requirement - none were advanced beyond the paper stage. 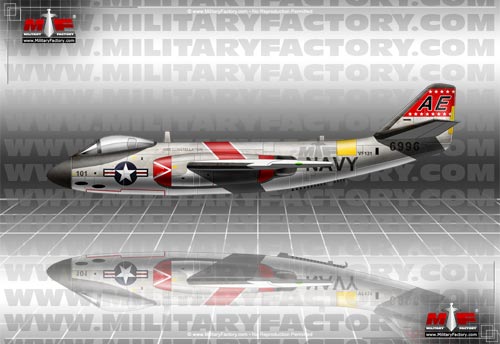 McDonnell's first foray into combat fighter design resulted in the short-lived XP-67 "Moonbat". Following this, the company made a name for itself as a primary supplier of jet-powered fighters to the United States Navy (USN), solidifying itself in American aerospace lore. The company certainly had a way with drawing up elegant designs and this went on to include the FH Phantom, the F3H Demon, and the A-4 Skyhawk - the company's pinnacle product becoming the F-4 Phantom II of the Cold War period.

Following the close of World War 2 (1939-1945), amidst a backdrop of advancing turbojet technology set to replace piston-powered combat aircraft, the USN sought a jet-powered day fighter for which to launch from its large fleet of aircraft carriers. This initiative resulted in Specification OS-105 arriving at the end of 1946. The call went out to industry players in Chance Vought, Curtiss-Wright, Douglas, Martin, and others that included McDonnell. The fighter would have to be of an advanced type, capable of straightline speeds of 600 to 650 miles-per-hour with a range out to 345 miles and a service ceiling of 40,000 feet. As a quick-reaction solution launched from carrier decks, a fast rate-of-climb was appreciated and the requirement sought something in the range of 10,000 feet-per-minute.

McDonnell engineers returned with three possible candidates under the "Model 40" project designation. While all of the submissions were equipped with 2 x Westinghouse 24C-6 series afterburning turbojet engines, the first two entries differed in their tailplane arrangement - the first featuring a single fin with upward-canted horizontal planes and the second switching to a V-type tailplane arrangement, doing away with the centralized rudder. All utilized a swept-back monoplane planform to help achieve the high-speed performance sought by USN authorities.

The initial submissions buried their turbojets separately in the wing roots, jettisoning exhaust at the wing trailing edge ahead of the empennage. Intakes for the air-breathing engines were triangular in their general shaping, airflow to pass unobstructed to the powerplants. The mainplanes were positioned slightly ahead of midships for balance.

The pilot was given a commanding view over and aft of the short nosecone assembly. A retractable, wheeled undercarriage (the nose leg allowing for a "kneeling" effect) would be used for ground-running and a tailhook for arresting on the carrier deck when landing. Folding wings would be used to improve storage space within the carrier hangar decks.

The Westinghouse 24C-6 turbojet promised an output rating of 3,000lb each, the combined thrust set to make this McDonnell Navy fighter one of the fastest in the world.

Expected standard armament was to comprise 4 x 20mm internal automatic cannons with two guns seated in the lower sides of the nose assembly. Future consideration was made for "up-gunning" these to 4 x 60mm types to contend with emerging threats.

The McDonnell 40A was the third aircraft of the proposed lot. This design form was something of a near-complete rewrite to the original approach. The engines were moved from the wingroots to the fuselage proper and fresh air was taken in through a nose-mounted intake instead. This reformed the wings to a more elegant shape (still retaining sweepback) and moved the guns to a higher mounting along the sides of the nose while also increasing the dimensions of the fuselage. A single-finned tailplane (with upward-canted horizontal planes) would make up the empennage.

In any case, none of these proposed designs was accepted for further work by the USN.©MilitaryFactory.com
Note: The above text is EXCLUSIVE to the site www.MilitaryFactory.com. It is the product of many hours of research and work made possible with the help of contributors, veterans, insiders, and topic specialists. If you happen upon this text anywhere else on the internet or in print, please let us know at MilitaryFactory AT gmail DOT com so that we may take appropriate action against the offender / offending site and continue to protect this original work.
Advertisements

ARMORING Survivability enhanced by armor allocated to protect pilot / crewspaces and / or critical operating systems.
MULTI-ENGINE Incorporates two or more engines, enhancing survivability and / or performance.
WING SWEEPBACK Mainplanes, or leading edges, features swept-back lines for enhanced high-speed performance and handling.
FOLDING WING(S) Mainplanes are designed to fold, improving storage on land and at sea.
HIGH-SPEED PERFORMANCE Can accelerate to higher speeds than average aircraft of its time.
HIGH-ALTITUDE PERFORMANCE Can reach and operate at higher altitudes than average aircraft of its time.
MARITIME OPERATION Ability to operate over ocean in addition to surviving the special rigors of the maritime environment.
PILOT / CREW EJECTION SYSTEM Assisted process of allowing its pilot and / or crew to eject in the event of an airborne emergency.
CREWSPACE PRESSURIZATION Supports pressurization required at higher operating altitudes for crew survival.
ENCLOSED CREWSPACE(S) Features partially- or wholly-enclosed crew workspaces.
RETRACTABLE UNDERCARRIAGE Features retracting / retractable undercarriage to preserve aerodynamic efficiency.

(Showcased performance specifications pertain to the McDonnell Model 40 production variant. Performance specifications showcased above are subject to environmental factors as well as aircraft configuration. Estimates are made when Real Data not available. Compare this aircraft entry against any other in our database or View aircraft by powerplant type)
PROPOSED:
4 x 20mm internal automatic cannons OR 4 x 60mm internal automatic cannons. 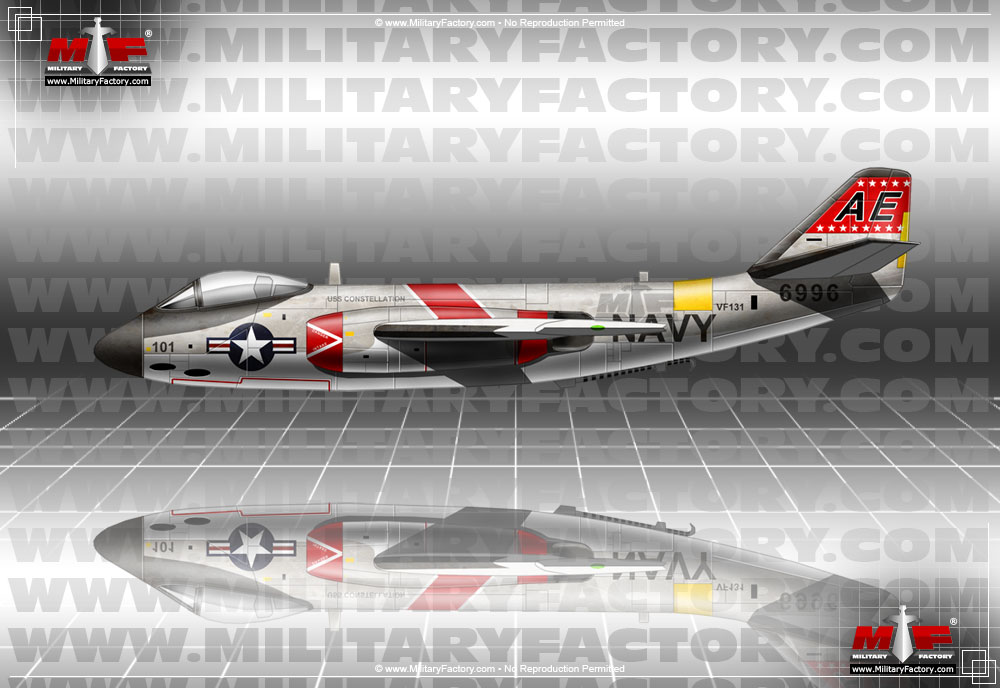