The Northrop Grumman Jackal was unveiled at a special forces conference in May 2022 as a jet-powered loitering munition solution. 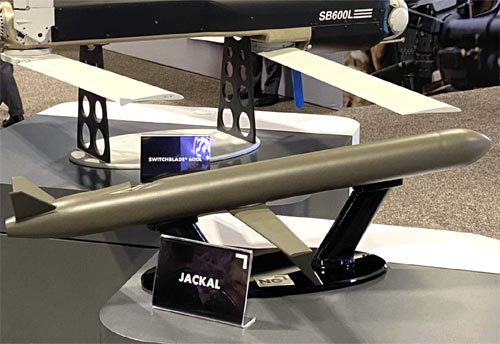 The ongoing war in Ukraine has placed a global spotlight on the value of drones and, in particular, the "loitering munition" subgroup. These Unmanned Aircraft Systems (UASs) patrol the skies in search for ground targets of opportunity. The simplicity of the role, coupled with generally ease-of-operation in design, has allowed smaller global powers to develop indigenous solutions through local means - no longer making loitering munitions a tool of the superpower.

Northrop Grumman has teamed with the UAS experts at AeroVironment to development the man-portable "Jackal" loitering munition concept. Unlike other loitering munitions, typically driven by electric or combustion motors / engines driving propellers, the Jackal is powered by a turbojet engine to achieve excellent performance. The system can, therefore, reach straightline attack speeds of 300 miles-per-hour and has an operational range out to 60 miles, loitering over contested areas for fifteen minutes as it seeks and targets unsuspecting elements below.

The program began development in 2017 under the direction of the Armament Systems Division of Northrop Grumman out of Plymouth, Minnesota. It was unveiled at Special Operations Forces Industry Conference 2022 held in Florida during May 2022.

The aircraft is given a missile-like appearance with a tubular body, rounded nosecone, and twin-finned (outward-canted) tail unit. Mainplanes are affixed at midships and are low-mounted with down-turned tips. An air intake is set ahead of the tailplanes for the air-breathing turbojet unit.

While an attack platform at heart, the Jackal is being developed as a multirole over-battlefield solution through modularity. Beyond its ability to carry a 10 lb war head, the airframe is also able to accept special-mission equipment (such as jammers and sensors) in its place to better cover the traditional Intelligence-Surveillance-Reconnaissance (ISR) role.

For AeroVironment's part in the program, this advanced attack drone product is an evolution to its highly-regarded "Switchblade" line of expendable loitering munitions (detailed elsewhere on this site) coupled with the backing of American defense powerhouse Northrop Grumman.©MilitaryFactory.com
Note: The above text is EXCLUSIVE to the site www.MilitaryFactory.com. It is the product of many hours of research and work made possible with the help of contributors, veterans, insiders, and topic specialists. If you happen upon this text anywhere else on the internet or in print, please let us know at MilitaryFactory AT gmail DOT com so that we may take appropriate action against the offender / offending site and continue to protect this original work.
Advertisements

(Showcased performance specifications pertain to the base Northrop Grumman Jackal production variant. Performance specifications showcased above are subject to environmental factors as well as aircraft configuration. Estimates are made when Real Data not available. Compare this aircraft entry against any other in our database or View aircraft by powerplant type)
10lb explosive impact-detonated warhead integrated into the airframe; can be replaced with special-mission equipment as needed. 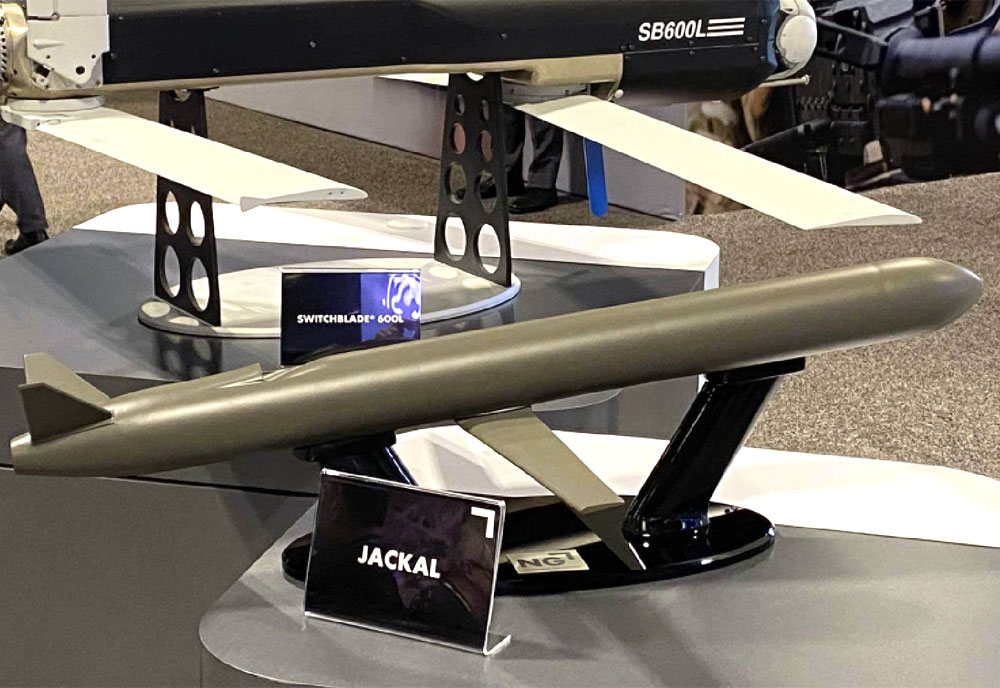