The Bell D-35 was drawn up as a possible counter to the emerging Soviet nuclear-capable bomber threat following World War 2.

Authored By: Staff Writer | Last Edited: 05/19/2022 | Content ©www.MilitaryFactory.com | The following text is exclusive to this site. 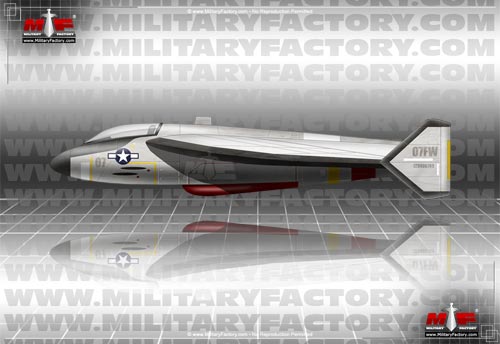 The Bell D-35 was conceived of as a potential bomber-interceptor for the United States Army Air Forces (USAAF) towards the close of World War 2 (1939-1945). With the dismantling of the Italian, German, and Japanese war machines, the United States would now concentrate of airspace deterrence / defense from the Soviet threat in the East. Various design competitions were had in 1945 for just a solution - resulting in the ultimately-abandoned D-35.

The USAAF requirement called for an interceptor capable of reaching 700 miles-per-hour, achieving short-term supersonic performance through both aerodynamic design and powerplant. This aircraft would be capable of flying upwards of 50,000 of altitude to meet the threat head-on and rate-of-climb would have the system reach this in just four minutes under full power. In keeping with USAAF wartime tradition, the proposed armament fit would center on multiple machine guns, in this case 4 x 12.7mm air-cooled Browning heavies.

Bell was one of six respondents to this requirement, joining competitors Consolidated Vultee, Douglas, North American, Northrop, and Republic Aviation.

Because turbojet technology of the time would not allow for the needed thrust / power / speed output to get the aircraft up to altitude at-speed, it was decided that a rocket motor would be the best fit for the requirement. For the Bell submission, this would include a pairing of two rocket boosters for maximum performance set to output 12,000lb.

The resulting Bell design of October 1945 was centered on a delta-wing planform (45-degree sweep along the leading edges) with the single-seat cockpit over the nose and the vertical tail fins set at each wingtip. The mainplanes were shoulder-mounted along the sides of the fuselage with the propulsion system buried within. This unit would exhaust through a circular opening at the rear of the fuselage between the two mainplane trailing edges. The four machine guns were to be installed under the nose, beneath the cockpit floor, to give the aircraft an appropriate offensive punch against enemy bombers.

Like other rocket-driven developments of the day, the Bell proposal would be launched unconventionally, most likely by launch rail under its own booster power. This is assumed as only a pair of main landing gear legs were planned for ground-running actions along with skids added to each wingtip fin to allow the aircraft to land in an open field under its own weight and drag.

Despite the work, the D-35 was not evolved beyond the paper stage - the requirement moving along the lines of the Consolidated Vultee and Republic Aviation submissions, leaving the D-35 with no further purpose. The two x-planes to come from this decision were the Republic XP-91/XF-91 and the CONVAIR XP-92, both detailed elsewhere on this site.
Advertisements 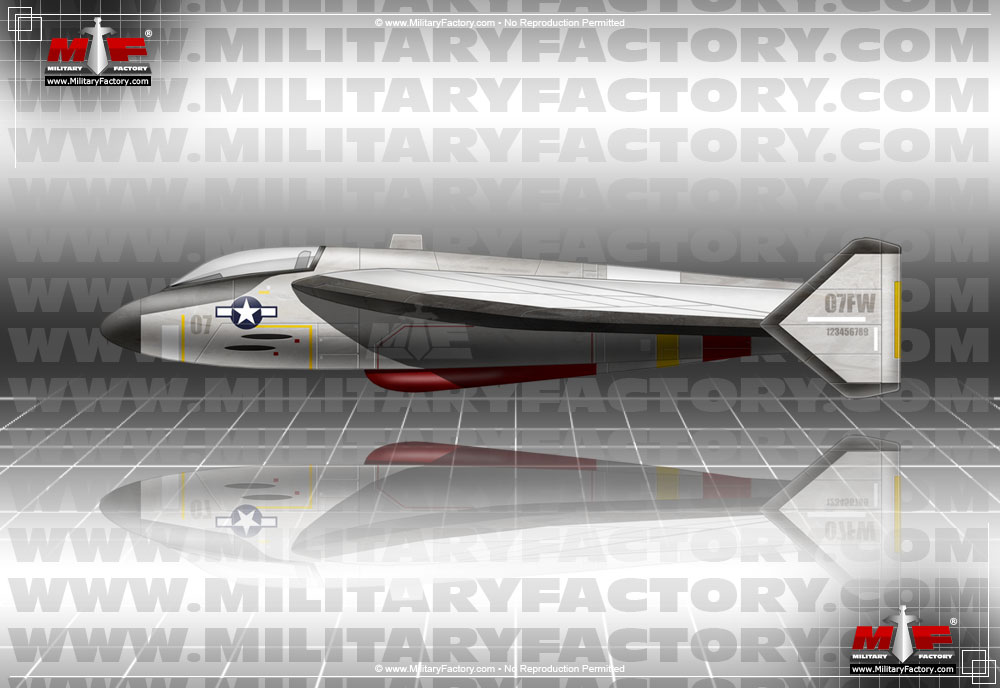