The world's first supersonic passenger transport was pulled from service in October of 2003. 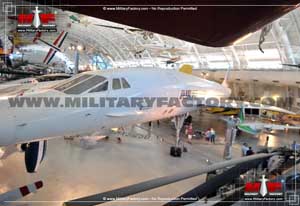 One of the great aviation stories to come out of a post-Cold War world, the British and French-made Concorde stands as the only supersonic passenger transport ever designed and flown on a regular basis. The system offered upper-crust passengers the ability to cross distances around the world in a matter of hours as opposed to the overnight flights experienced by standard passenger transports of the time. In the end, however, a changing world and economic pressures forced the retirement of the Concorde fleet, leaving most never to have traveled one of the finest technological marvels of the twentieth century.

The Concorde originally began as two separate projects being fielded by the British firm of British Aerospace (which now also controlled British Aircraft Corporation) and the French bureau of Aerospatiale (which now also controlled Sud Aviation). With other nations trying to field their own individual supersonic designs, Britain and France entered into a formal agreement to save cost and development resources by producing a joint product. As early as 1962, the Concorde was being developed with the first two prototypes - one British and one French - flying in 1969.

British contractors handled construction of three portions of the main forward part of the fuselage. Additionally they were charged with the vertical tail assembly, engine ducts and their corresponding nacelles and the rear portion of the fuselage. Other work including the installation of the four powerplants, electrical, oxygen and fuel control systems. Conversely, French contractors were charged with handling the construction of the delta-wing assembly, avionics, communications and hydraulic controls. Engine development was split between the two firms of Rolls-Royce and SNECMA. The resulting powerplant was the Olympus 593 Mk 610, offering nearly 40,000lbs of thrust each with up to 17 percent afterburning potential. Four such engines would be fitted underneath the wings, two to each wing.

The Concorde was designed to offer up the slightest in the way of air resistance, with designers settling on a slim fuselage with a low-wing monoplane delta wing layout. A single vertical tail surface was mounted at rear with elevators added to the main wing system instead of on the empennage. The high speeds of supersonic flight required that the design be of a pencil-type shape, obscuring the flight crew's view below when taxiing. As such, the nose cone was made into a positional assembly, allowing it to be positioned down when the aircraft was taxiing or flying at low-speeds/low-altitude.

Ingenuity throughout the design did not take a back seat either. The fuel tanks mounted throughout the large-area delta wings served double duty as heat sinks for the wing assemblies themselves during high-speed flight. Titanium - a popular component of high-speed/high-altitude flight - was utilized throughout the design. Internally, the Concorde was crewed by three standard personnel with four flight crew attendants. The standard seating configuration allowed for up to 100 passengers though as many as 128 (some sources show 144) could be allowed.

From the outset, the dream of supersonic flight had specifications for the Concorde reaching speeds at around Mach 2.5. Unfortunately this was deemed non-practical in terms of construction materials proposed. As such, the maximum speed was sacrificed to a still-impressive Mach 2 and an equally impressive range of over 4,000 miles with an altitude ceiling of around 60,000 feet.

In the end, the Concorde lived up to expectations but failed to create enough of an international buzz to warrant continued production for export orders. Only 14 examples of the Concorde were produced during its production run, allocating seven to the British and seven to the French. The only other operator of the system was Singapore, which had leased a few examples. As impressive as the Concorde was, economic and environmental pressures set in. The aircraft was proving difficult to maintain in a fuel-strapped economy and many countries disallowed use of a supersonic aircraft, generating sonic booms with over-flights over populated areas, limited the Concorde to traveling over large spans of open water - particularly the Atlantic. An accident in 2000 grounded the fleet for a year until the British and French jointly decided against continuing flights of the Concorde series. Such was the end of the supersonic era of passenger flight.©MilitaryFactory.com
Note: The above text is EXCLUSIVE to the site www.MilitaryFactory.com. It is the product of many hours of research and work made possible with the help of contributors, veterans, insiders, and topic specialists. If you happen upon this text anywhere else on the internet or in print, please let us know at MilitaryFactory AT gmail DOT com so that we may take appropriate action against the offender / offending site and continue to protect this original work.
Advertisements


(Not all ordnance types may be represented in the showcase above)
Concorde - Base Series Name; 20 aircraft completed. 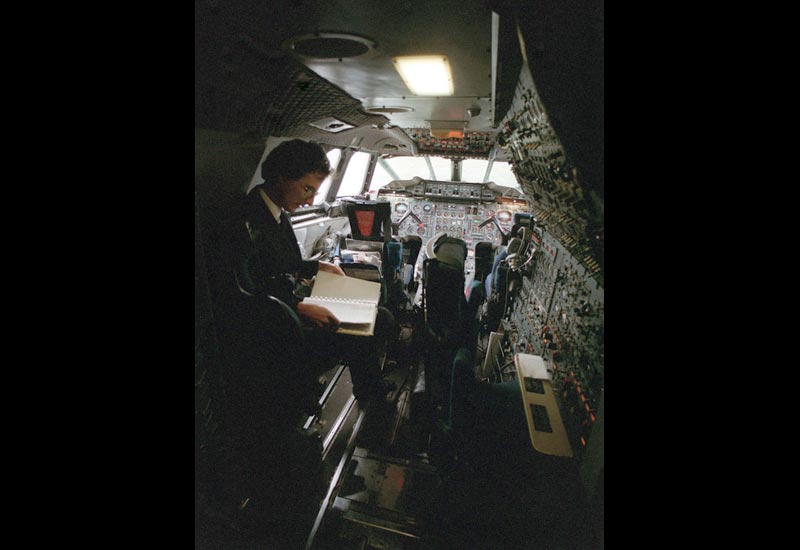 General Assessment
Firepower
Performance
Survivability
Versatility
Impact
Values are derrived from a variety of categories related to the design, overall function, and historical influence of this aircraft in aviation history.
Overall Rating
The overall rating takes into account over 60 individual factors related to this aircraft entry.
22
Rating is out of a possible 100 points.
Relative Maximum Speed
Hi: 1400mph
Lo: 700mph
This entry's maximum listed speed (1,354mph). 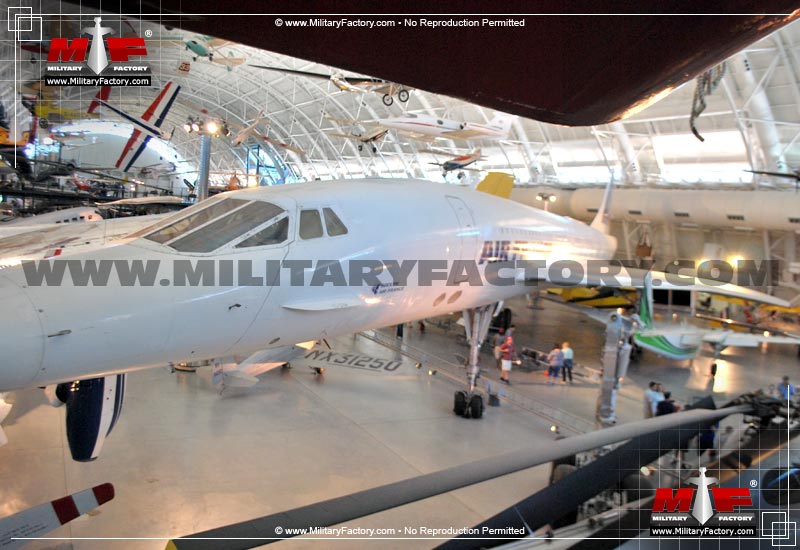 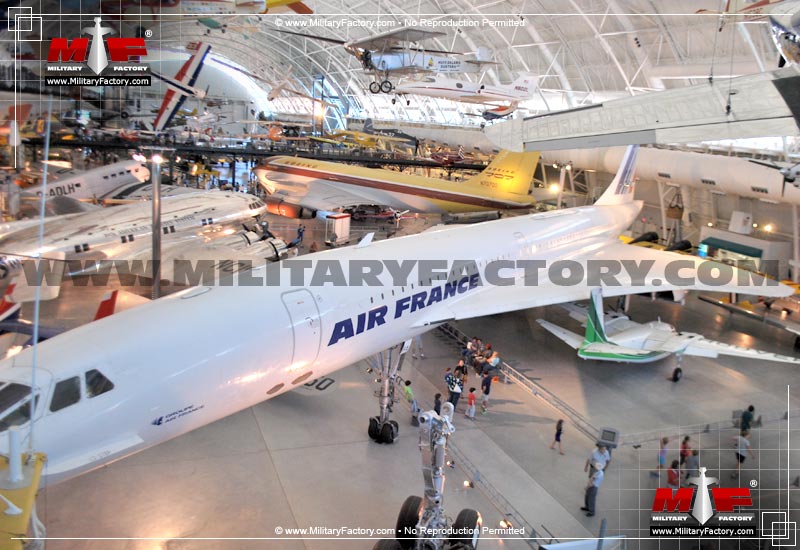 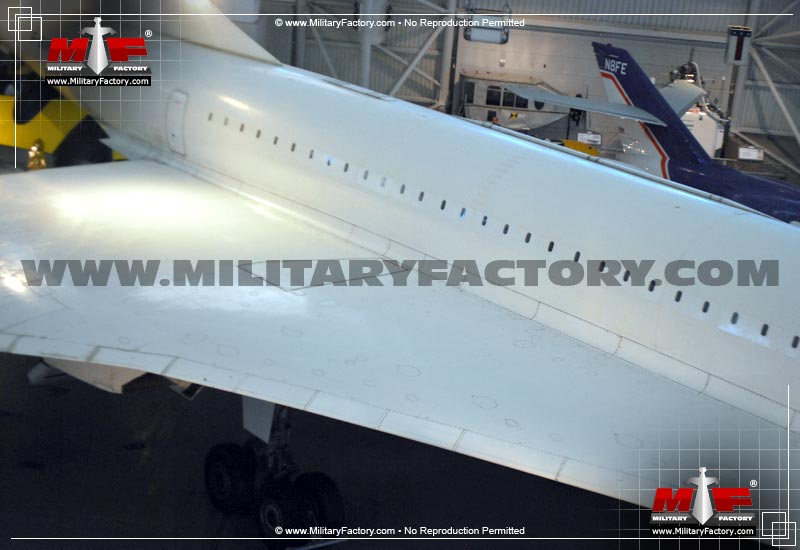 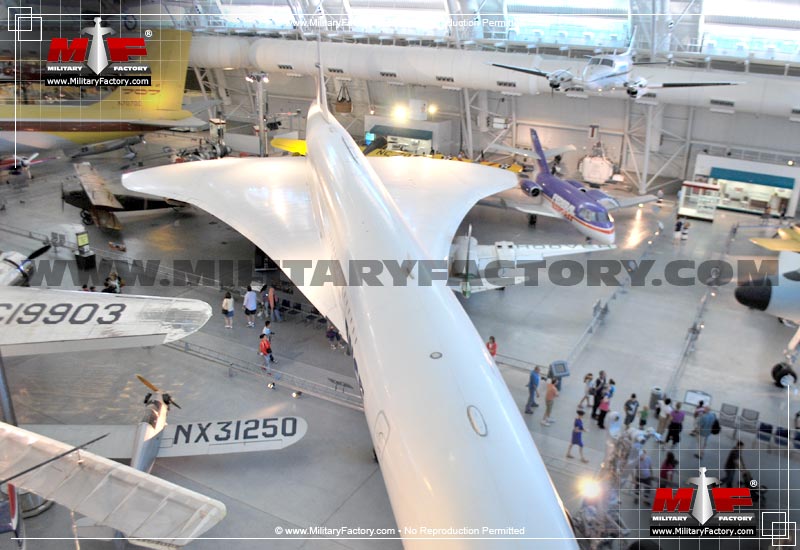 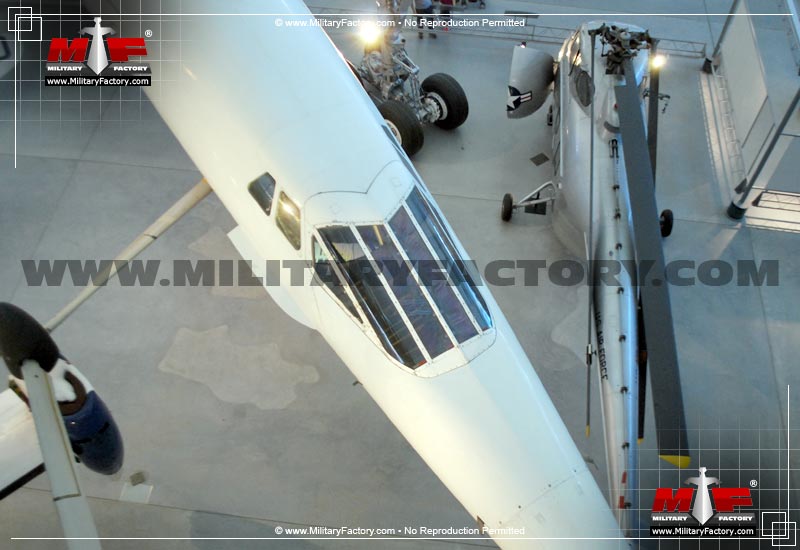 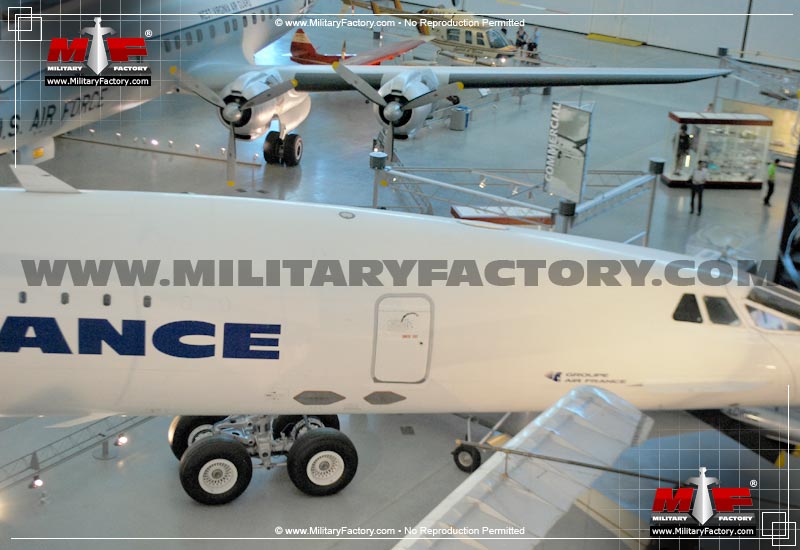 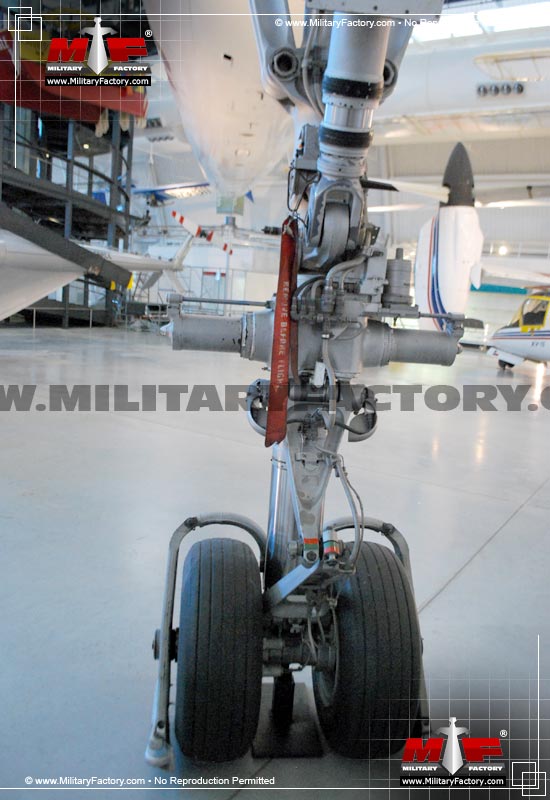 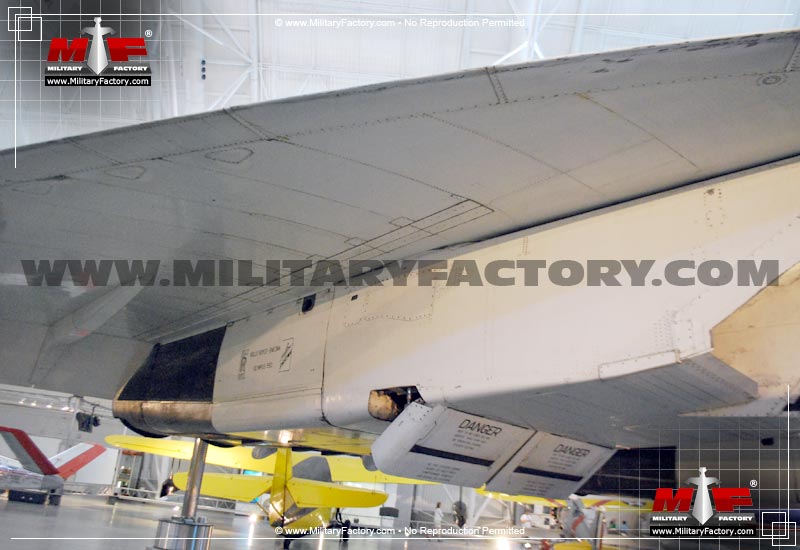 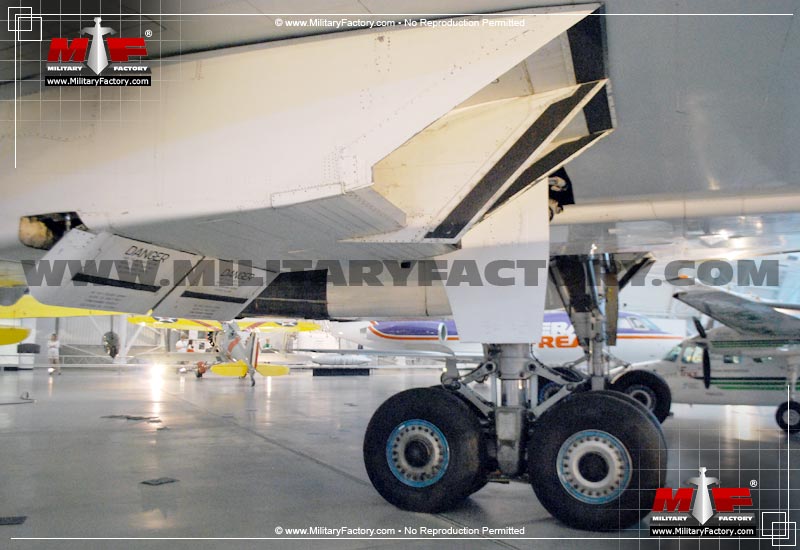 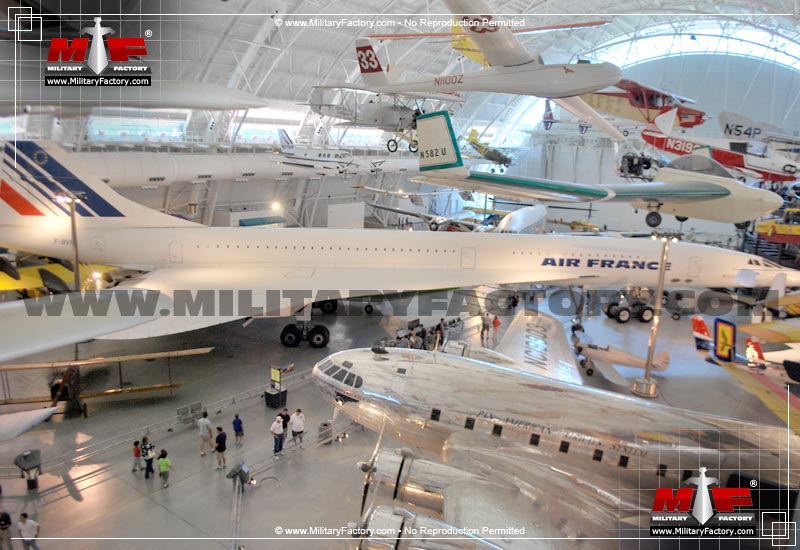 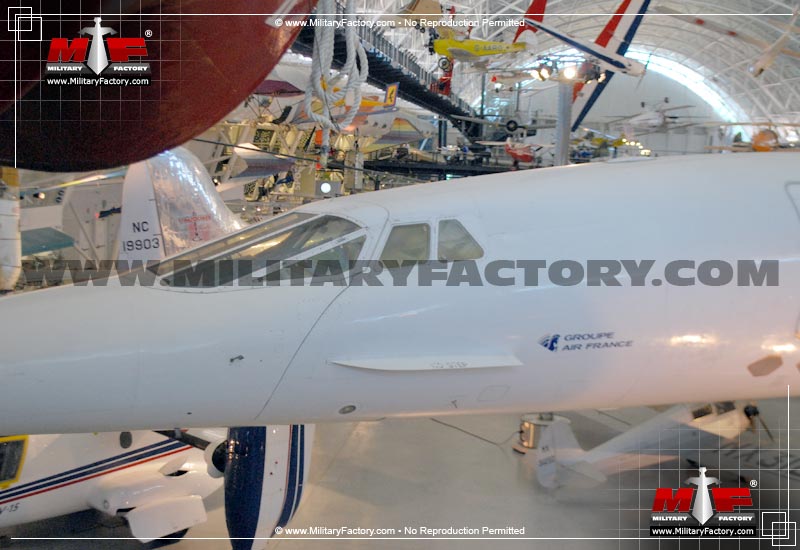 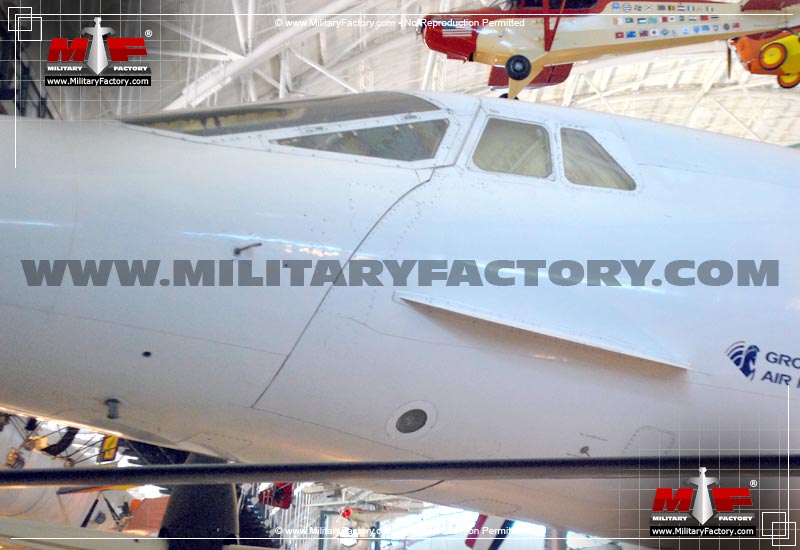 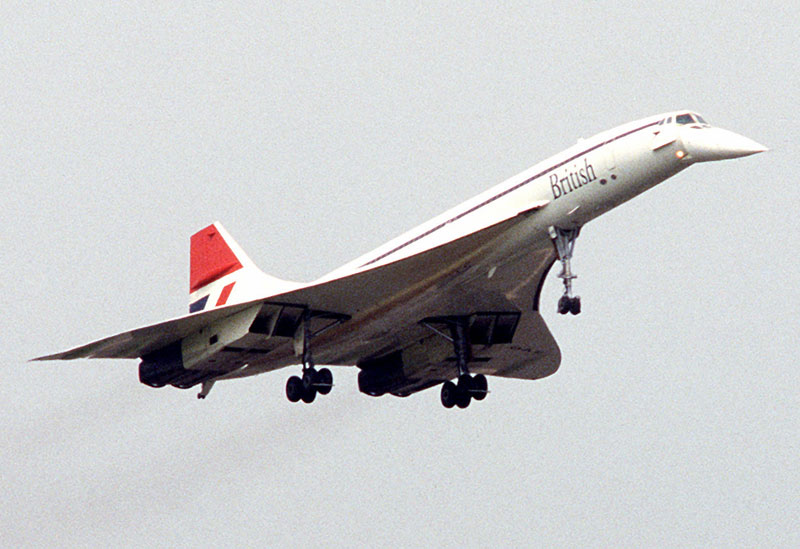 Low forward right side view of an Aerospatiale British Aircraft Corporation Concorde coming in for a landing; color
14 / 15 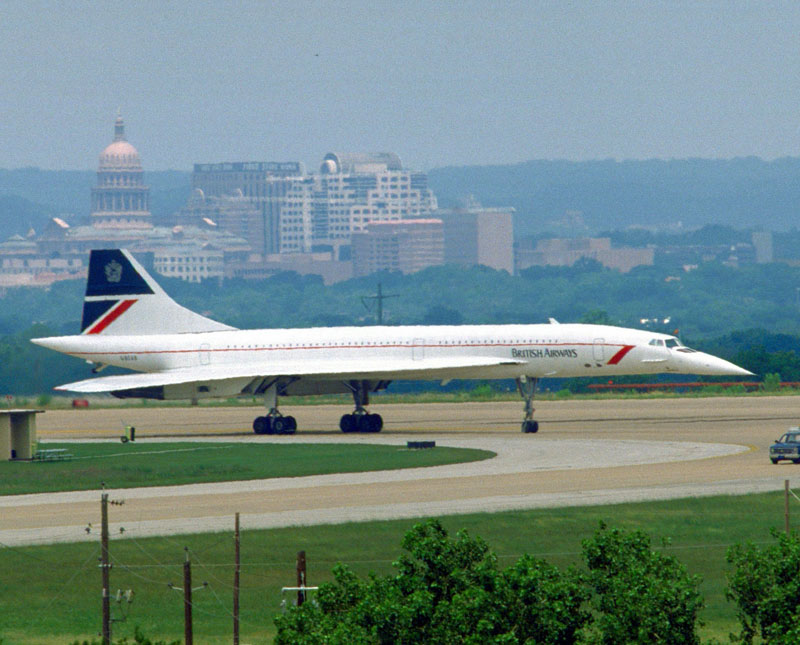 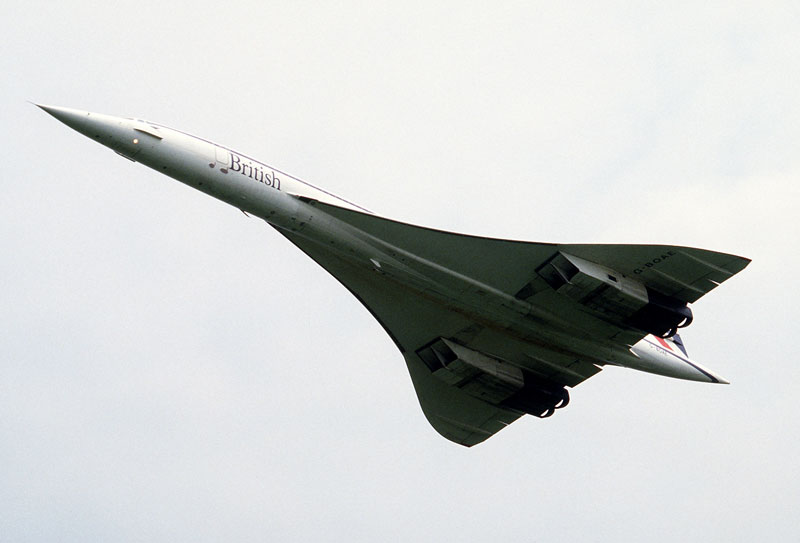