Authored By: Staff Writer | Last Edited: 02/23/2022 | Content ©www.MilitaryFactory.com | The following text is exclusive to this site. 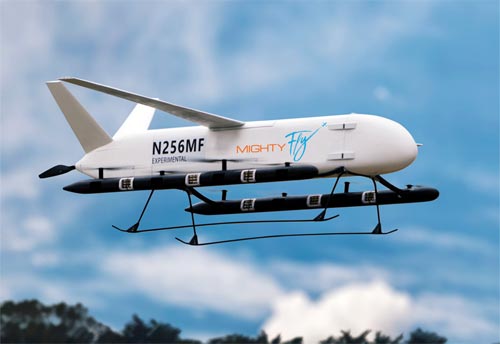 Start-up MightyFly (est. October 2019) looks to the future of airborne-based logistics with its all-new, electrically-powered MF-100 "Electric Vertical Take-Off and Landing" (eVTOL) "Unmanned Aircraft System" (UAS) development. A scaled-down prototype completed an initial autonomous delivery to prove the concept sound and the full-scale unit underwent construction in November 2020. Special air-worthiness certification by the FAA then followed in March of 2021. That April (the same time securing an impressive haul of over $5 million USD in seed funding), the first autonomous flight was successfully had by the MF-100 with the company now seeking logistical partnerships heading into 2022-2023.

As built, the MF-100 utilizes eight total lift rotors/motors (with four props set to a hull side) and sports a single "pusher" prop at the rear of the fuselage, the latter used to the necessary forward flight action. With its simplistic, low-cost skid undercarriage arrangement (wheeled for ground adjustments/relocation of the unit), the MF-100 features qualities akin to a conventional helicopter as it can take-off and land where most fixed-wing aircraft cannot. The rounded, rectangle fuselage houses most of the pertinent operating systems, cameras/sensors, and power supplies while outboard sponsons mount four lift motors each, these providing balanced, fully-controlled hovering. Traditional straight monoplanes are set over the fuselage and a "V-type" tail unit is affixed to the extreme aft-end of the aircraft to complete the design.

The MF-100 is marketed with "End-to-End" (E2E) autonomous delivery capability, its inherent VTOL ability, and can carry up to 100lb of cargo out to a range of 600 miles while reaching speeds of 150 miles-per-hour. Because of its all-electric powerplant / drive arrangement, this eVTOL is a carbon-neutral, ecologically-friendly design. A "Distributed Electric Propulsion" (DEP) scheme is in-built, providing a measure of safety should one of the lift props fail - the unit can undertake an emergency landing relatively safely under its own power in such an event.

The primary goal of the product is to reduce the reliance on ground-based delivery trucks with the hope of reducing carbon emissions considerably. The MF-100 would infiltrate several sectors of the commercial logistics market including warehouse-to-retail and rural delivery. Beyond this is an eye towards humanitarian support / disaster relief operations as the air system would be able to reach hard-to-access areas with much-needed supplies and vital medicines.

In the general logistics pipeline (typically package delivery), MF-100 UAS would be sent to, and arrive at, the fulfillment center following the acceptance of the customer order. After taking on cargo, the aircraft would then head directly towards the destination all-the-while monitored. Once there, the cargo would be unloaded and the aircraft ready for its next assignment - all this without the need to involve a ground-based truck and driver.©MilitaryFactory.com
Note: The above text is EXCLUSIVE to the site www.MilitaryFactory.com. It is the product of many hours of research and work made possible with the help of contributors, veterans, insiders, and topic specialists. If you happen upon this text anywhere else on the internet or in print, please let us know at MilitaryFactory AT gmail DOT com so that we may take appropriate action against the offender / offending site and continue to protect this original work.
Advertisements 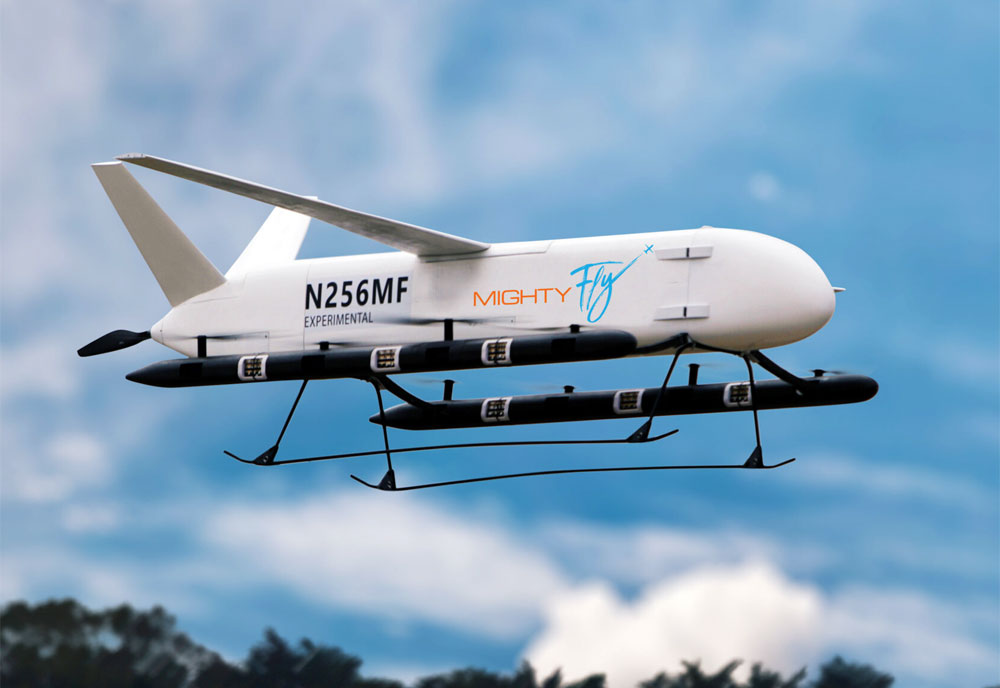