The ungainly Ilyushin Il-20 was planned as the successor to the storied Il-2 and Il-10 ground attacker lines - just one flyable prototype was produced.

Authored By: Staff Writer | Last Edited: 03/03/2022 | Content ©www.MilitaryFactory.com | The following text is exclusive to this site. 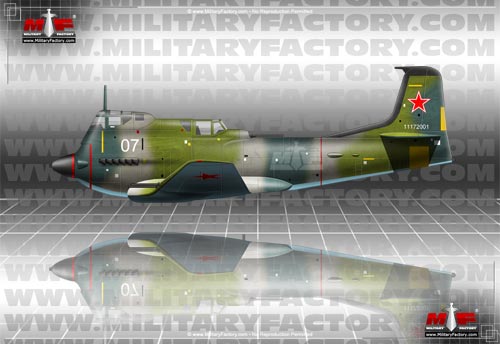 Alongside the T-34 Medium Tank, the Ilyushin Il-2 "Shturmovik" ground-attack aircraft provided the Soviet Union with a tremendous "one-two" punch against the invading Germans along the East Front of World War 2 (1939-1945). This aircraft, one of the most -produced of all time with 36,183 built, became a legend as it went on to earn such nicknames as the "Hunchback" and "Flying Tank" during its time aloft. It eventually went on to see service with many Soviet allies and supported states including Bulgaria, Czechoslovakia, Hungary, and Yugoslavia.

Even before this phenomenal aircraft had written its history, engineers at Ilyushin were already hard at work on its successor to improve upon the inherent weaknesses of the original design - this effort leading to the Il-10 (NATO: "Beast") of 1944 of which 6,166 airframes followed in the production effort. The new version saw service well into the early stages of the Cold War period (1947-1991) and included considerable manufacturing from Czech aero-firm Avia which added 1,200 to the total under the "B-33" designation. Against this backdrop, the Il-10's successor was itself being planned and this effort gave rise to the "Il-20" of 1948.

Like the iterations before it, the Il-20 was to have a distinct focus on ground-attack in a war environment that now saw the Soviet Union potentially pitted against waves of armored formations emerging from the West. Following the earlier designs, the attacker would have to be "resilient, reliable, and robust" in low-level / low-altitude flight with its crews and internal systems exposed to enemy ground-fire from all angles. The aircraft's development stemmed from an official requirement drawn up by Soviet authorities in 1947 calling for such a solution with enhanced performance and firepower when compared to its predecessors.

Again, a monoplane planform with single-engine arrangement and heavy armoring would figure into the Ilyushin aircraft. All-metal construction would be used throughout and the engine-of-choice became the M-47 (MF-45Sh/M-45Sh) which promised an output rating of 3,000 horsepower through a liquid-cooled inline configuration.

Ilyushin engineers returned with a rather "interesting", if ungainly, aircraft form intended to fulfill the role. From the top-down planform view, the aircraft was more or less conventional, sporting straight monoplane wing members with clipped tips and a traditional single-finned tail unit with low-mounted horizontal planes.

However, the side profile quickly gave up the physical failings of this animal:

The pilot was positioned under a framed cockpit at the extreme front-end of the fuselage directly above the engine compartment and aft of the four-bladed propeller unit - the idea being that this sort of arrangement would maximize vision "out-of-the-cockpit" and would even include limited downward vision to boot. Armor protection would reach up to 15mm in places, protecting the crew and operating systems alike from potentially lethal ground-based fire. Like the Il-2 and Il-10 before it, the Il-20 would carry a rear-facing gunner in a stepped cockpit facing/heading aft. This position would be afforded a dual-machine gun or cannon setup to protect the aircraft's vulnerable "six". The undercarriage remained a "tail-dragger" configuration and was fully-retractable into the underside of the airframe in the usual way: main members resided in the wing mainplanes while a tail-wheel sat under the tail unit as expected.

The heart of the system would be its armament suite and several installs were entertained. Proposed fits included 23mm automatic cannons - some fixed, others adjustable, and still others in whole turret emplacements - at the fuselage and in the wings. Another approach had 23mm automatic cannons fitted at oblique angles to allow the pilot to engage ground targets while retaining level flight. Cannon calibers as large as 45mm were also under consideration.

Beyond this, the aircraft was envisioned to carry both rockets (132mm) as well as conventional drop bombs at external hardpoints (up to 2,626lb).

Well-armed and armored, the Il-20 certainly held promise - at least on paper.

In November of 1948, Ilyushin engineers finally realized their working, flyable prototype and this airframe went airborne for the first time on December 4th of that year. However, the brutish-looking aircraft proved slow and rather limited when compared to the aircraft it was destined to replace. Additional, there proved inherent dangers to the crew (the nose-mounted propeller being one of them) and the new engine design was of course problematic - all this rendering the Il-20 ground-attacker project moot. Adding to this was the rise in turbojet technology powering military aircraft as well as ground-based missile defenses beginning to take root, further reducing the need for a prop-driven ground-attacker over the evolving battlefield.

As completed, the Il-20 prototype had a running length of 44.6 feet and a wingspan of 50.6 feet. Its empty weight was 16,535lb against a gross rating of 20,944lb. Maximum recorded speed was 320 miles-per-hour with a service ceiling of 25,430 feet.©MilitaryFactory.com
Note: The above text is EXCLUSIVE to the site www.MilitaryFactory.com. It is the product of many hours of research and work made possible with the help of contributors, veterans, insiders, and topic specialists. If you happen upon this text anywhere else on the internet or in print, please let us know at MilitaryFactory AT gmail DOT com so that we may take appropriate action against the offender / offending site and continue to protect this original work.
Advertisements

Soviet Union (cancelled)
(OPERATORS list includes past, present, and future operators when applicable)
✓ Ground Attack (Bombing, Strafing)
Ability to conduct aerial bombing of ground targets by way of (but not limited to) guns, bombs, missiles, rockets, and the like. ✓ Close-Air Support (CAS)
Developed to operate in close proximity to active ground elements by way of a broad array of air-to-ground ordnance and munitions options. ✓ X-Plane (Developmental, Prototype, Technology Demonstrator)
Aircraft developed for the role of prototyping, technology demonstration, or research / data collection.

(Showcased performance specifications pertain to the base Ilyushin Il-20 production variant. Performance specifications showcased above are subject to environmental factors as well as aircraft configuration. Estimates are made when Real Data not available. Compare this aircraft entry against any other in our database or View aircraft by powerplant type)
VARIABLE:
Various 23mm automatic cannon designs proposed. Also inherent support for rockets and conventional drop bombs. 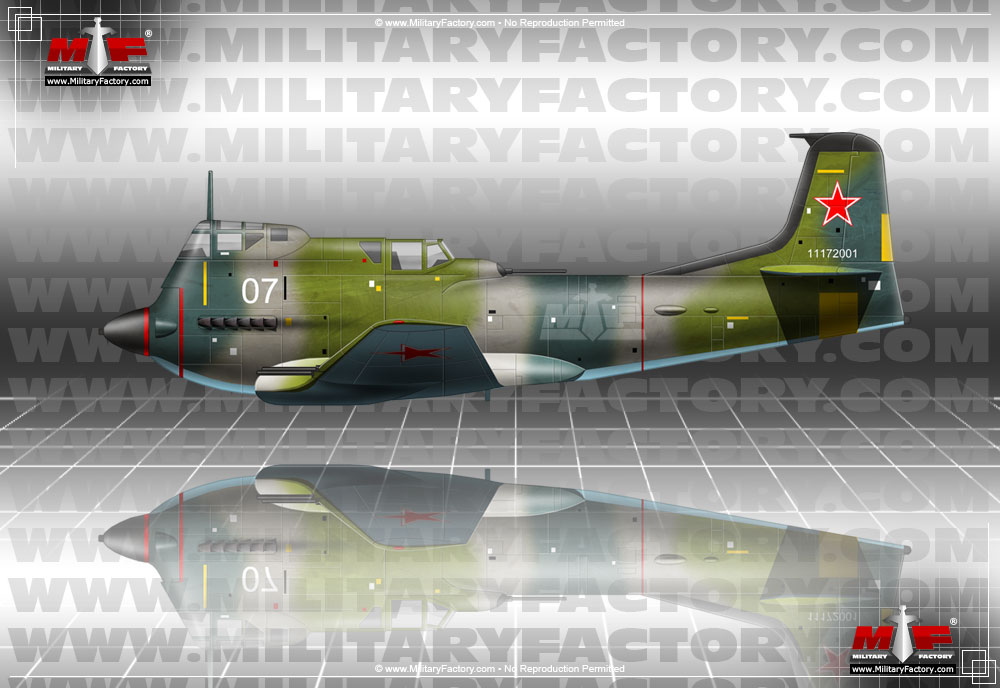