The Israeli-originated Steadicopter Black Eagle 50 unmanned system is a capable design incorporating all the benefits of a traditional helicopter. 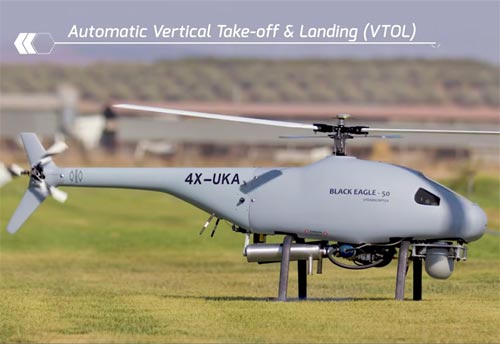 In today's world of Unmanned Aircraft Systems (UASs), the military, industry, and civilian market customer all have a breadth of options to consider. The evolution of unmanned flight designs has also broadened choices in the realm of the RUAV ("Rotary-wing Unmanned Aerial Vehicle") - vehicles given the qualities and capabilities of a helicopter (rotorcraft). In the category, Steadicopter of Israel offers its highly-capable "Black Eagle 50" series RUAV for those discerning buyers requiring a day/night, maritime/over-land, multi-role/multi-purpose solution.

The Black Eagle 50 is actively marketed by the company for military, security, and civilian applications to cover the specific requirements of maritime (over-water) service, humanitarian assistance, Search and Rescue (SAR) operations, Oil and Gas industry (oil rig) support, and Intelligence-Surveillance-Reconnaissance (ISR) sorties. It can also be outfitted for target acquisition missions in support of ground and aerial forces in the military sense.

Externally, the vehicle mimics design lines seen in other RUAVs currently available: the bulk of the design's weight is held forward, housing all pertinent engine, fuel, avionics, and mission-specific systems. Overhead, seated on a shallow mast, is the main rotor sporting a two-bladed unit design. Intersecting counter-balance arms are noted. Under the fuselage sits a simple, robust four-point landing skid which helps to reduce costs and operating complexity of the machine. The fuselage features a fixed, tapering stem emanating aft, shrouding the drive shaft of the tail rotor, and capped by a vertical and horizontal rudder fin. The tail rotor, a three-bladed unit, is set facing starboard to act as the anti-torque element in the design. A traversing blister is in the "chin" position housing powerful optics (Dual Sensor InfraRed / Electro-Optical (IR/EO) fit).

The Black Eagle 50's development as a rotorcraft gives it unparalleled capabilities as it is able to reach areas where fixed-wing UAVs dare not go. This includes rugged mountainous regions where vertical flight is essentially a requirement. The vehicle possesses all of the qualities of a traditional / conventional helicopter without the need to expose pilots and crews to unnecessary dangers. This ability means the system can be used across a deeper mission set all the while keeping its operators safe from harm. An inherent hovering ability also means the aircraft can support friendlies already on the ground, those unfortunate enough to find themselves in an inaccessible location to aircraft altogether.

The Black Eagle 50H is a hybrid-powered, environmentally-conscious model featuring all of the base qualities of the 50-model unit. It can be used in day-night environments, features a hovering capability regardless of payload weight, and is both relatively lightweight and compact. It mates the best qualities of Steadicopter's electric drive with a gasoline-fueled powerplant - allowing the operator to switch between each unit as needed. This entry bridges the gap in payload and range capabilities of the Black Eagle 50 and the Black Eagle 50E series. The H-model will be on full display at the Singapore Airshow in February 2022.

The compact Black Eagle 25E and larger/heavier 50E are related models of electric propulsion and based in the Model 50 series.

The company also offers a conversion kit allowing manned helicopters to be transitioned to RUAVs. The lack of a human pilot now allows these same airframes to install additional fuel stores for improved operating ranges or mission-specific equipment beyond standard fittings.©MilitaryFactory.com
Note: The above text is EXCLUSIVE to the site www.MilitaryFactory.com. It is the product of many hours of research and work made possible with the help of contributors, veterans, insiders, and topic specialists. If you happen upon this text anywhere else on the internet or in print, please let us know at MilitaryFactory AT gmail DOT com so that we may take appropriate action against the offender / offending site and continue to protect this original work.

(Showcased performance specifications pertain to the base Steadicopter Black Eagle 50 production variant. Performance specifications showcased above are subject to environmental factors as well as aircraft configuration. Estimates are made when Real Data not available. Compare this aircraft entry against any other in our database or View aircraft by powerplant type)
None. Mission equipment fitted for ISR, SAR, Oil and Gas industry support, and other roles. 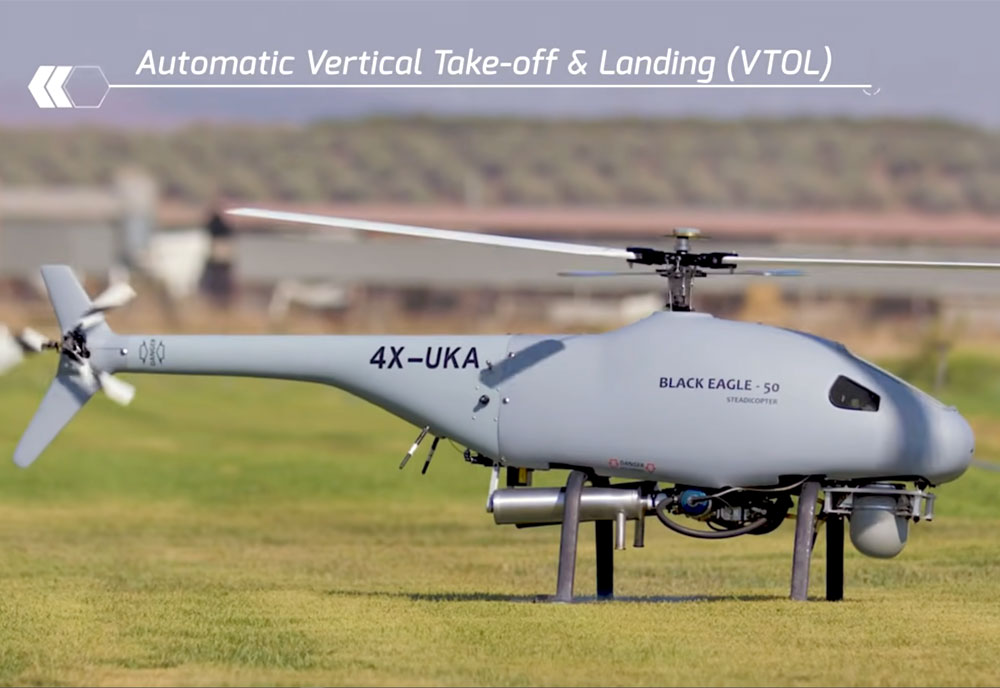 Aviation developments of similar form and function, or related to, the Steadicopter Black Eagle 50...