Authored By: Staff Writer | Last Edited: 12/29/2021 | Content ©www.MilitaryFactory.com | The following text is exclusive to this site. 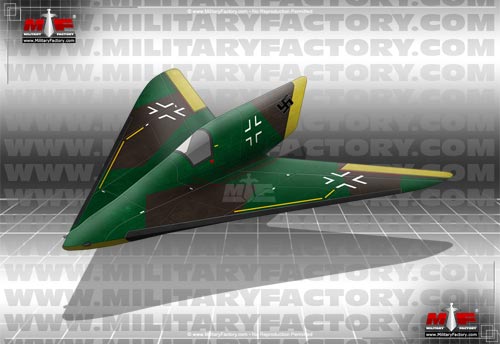 Germany's Horten Brothers (Walter and Reimar) undertook a plethora of design studies centered on the aircraft concept known as the "flying wing". This design approach deleted traditional tail fins in favor of a blended body-wing airframe which utilized considerable surface area for lift/drag balance and enhanced operational ranges (due to the increase in internal volume for fuel stores) and incorporated both elevators and ailerons as part of the mainplane design for control. Their dream was only partly realized in the Ho IX (Ho 229) jet-powered fighter-bomber for the Luftwaffe by war's end (1945) but went on to be furthered by the Americans in the Northrop XB-35 / XB-49 long-range strategic bomber prototypes (both detailed elsewhere on this site). It was the Northrop B-2 "Spirit" that went on to encapsulate the concept for modern audiences - the stealth bomber continuing to fly today.

Before the end of 1944, the German Air Ministry was centering its sights on a supersonic-capable fighter to counter the constant threat of Allied bombers escorted by high-performance piston-driven fighters. While safe, manned supersonic flight was still some years away - accelerated by the projects of the 1950s and 1960s primarily in the United States, Great Britain, and Russia - the concept was deemed to be within reach with the rise of turbojet technology - particular under the desperation of war for the Luftwaffe. The Ministry looked for a solution that could reach speeds of 1,120 miles-per-hour and presented their request to the usual players of German air industry.

At this time, Germany was one of the leaders in turbojet design and development but all existing types then available lacked the output power needed to produce the speeds required. It was suggested that the turbojet could play well with the inclusion of a rocket booster motor to assist the aircraft in achieving the desired straight line speeds - at least for a limited period of time while in the air. Besides the obvious technical hurdles, supersonic flight theory was still an ever-evolving field, requiring engineers to design and aircraft for what was essentially "the unknown" - as not much concrete data on the inherent dangers and benefits of flying beyond the speed-the-of-sound was had at the time.

This did not prove a problem for the forward-thinking Horten Brothers who moved beyond costly, project-delaying wind tunnel concepts to full-sized / near-full-sized unpowered prototypes. Their approach became the "Ho.XIII" which emerged in physical form with the Ho.XIIIA unpowered sailplane / glider. The Brothers returned to their flying wing approach in the Ho.XIIIA, giving the aircraft 60-degree sweepback of the mainplanes to accommodate the intended high speed envelope. The single-seat cockpit was slung under the frame to provide the pilot with excellent all-round vision, the nacelle mounted at the extreme rear of the arrowhead-like airframe shape. Dimensions included a length of 31.9 feet, a wingspan of 39.3 feet, and an MTOW of 730lb.

Completed in the early part of 1945, the program flew for just 10 hours across various test flights before the Brothers proceeded to advance the project to the operational-level form. The Ho.XIIIA managed to fly at speeds of 110 miles-per-hour to prove the basic concept largely sound.

Moving on to the fleshed out supersonic fighter form, the Brothers revamped the tailless design to include an oversized vertical fin for added stability, the structure proposed to run from ahead of midships to beyond the trailing edge of the airframe proper. At its leading edge was embedded the cockpit in streamlined fashion - the single-seat emplacement (under single-piece canopy) to be fully-pressurized for high-altitude operation. Of note is that vision out-of-the-cockpit would have been blocked by the fin structure forward and aft of the pilot as well as the mainplanes themselves. The mainplanes retained the 60-degree sweepback of the Ho.XIIIA while having 30-degree sweepback at the trailing edges. The fin, itself angled back at 18-degrees, incorporated the rudder and trim plane. Beyond this, a modern tricycle undercarriage (fully-retractable) was to be used for ground-running with the main legs fitted amidships (retracting forwards) and the nosewheel leg (retracting backwards) taking its usual place under the nosecone.

The flying wing concept offered the inherent advantage of greater shared internal volume meaning that the engine and fuel stores could somewhat easily be buried within the depth of the airframe leaving the aircraft largely aerodynamic. Aspirating for the air-breathing jet would be handled either through intakes at the wingroots or through a single opening aft and under the nose. Despite the Ho.XIIIB not being a true flying wing with the new inclusion of the vertical fin, it retained the benefits of its original all-wing-area design approach.

As with other late-war German aircraft projects centered on high speed, the Brothers looked for a hybrid / combination powerplant arrangement involving the latest German turbojet coupled with a proven rocket booster. This was to become the promising BMW 003R offering between 1,760lb and 2,420lb of thrust output power coupled with the liquid-fueled Walter HWK 509 rocket developing an additional 2,750lb of thrust. The onboard fuel supply would provide the aircraft with an in-air endurance time of about one hour, the limited-burn rocket being activated/deactivated by the pilot when already airborne.

Armament was to focus on 2 x 20mm MG213 internal automatic cannons mounted to either side of nose - this giving ample firepower against any threat of the day.

While the operational-level Ho.XIIIB was estimated for service entry by the middle of 1946, no prototype was ever built for Air Ministry review before the end of the war which occurred, for Germany, in May of 1945. The Ho.XIIIA sailplane in its damaged form was found by Allied troops and ultimately destroyed, leaving little trace of the project today.
Advertisements

(Showcased performance specifications pertain to the Horten Ho.XIIIB production variant. Compare this aircraft entry against any other in our database or View aircraft by powerplant type)
PROPOSED:
2 x 20mm MG 213 internal automatic cannons in the nose. 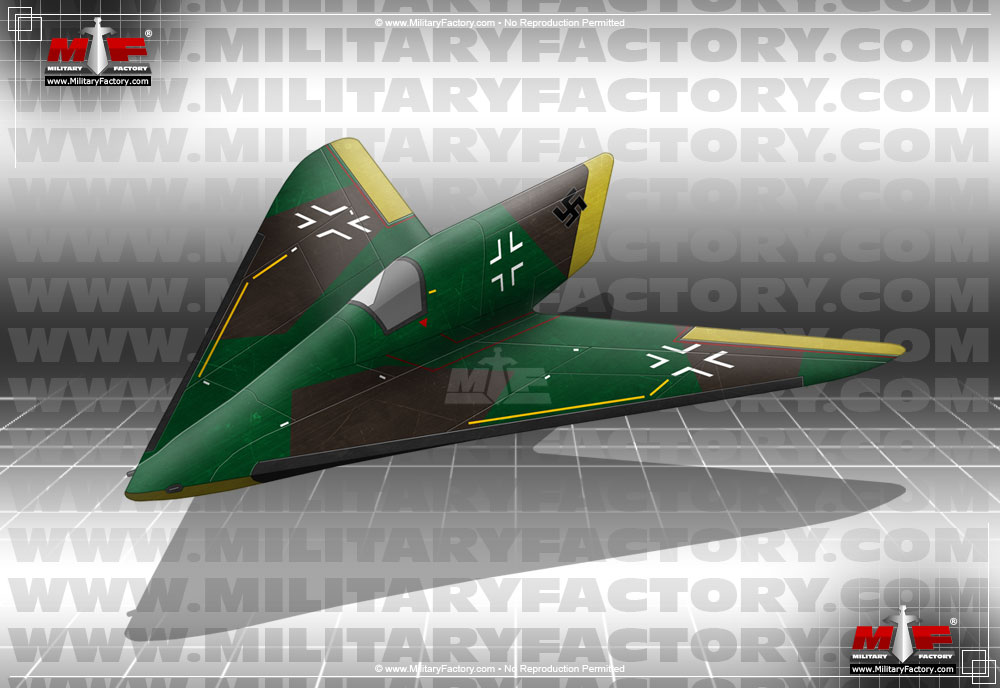 Aviation developments of similar form and function, or related to, the Horten Ho.XIII...