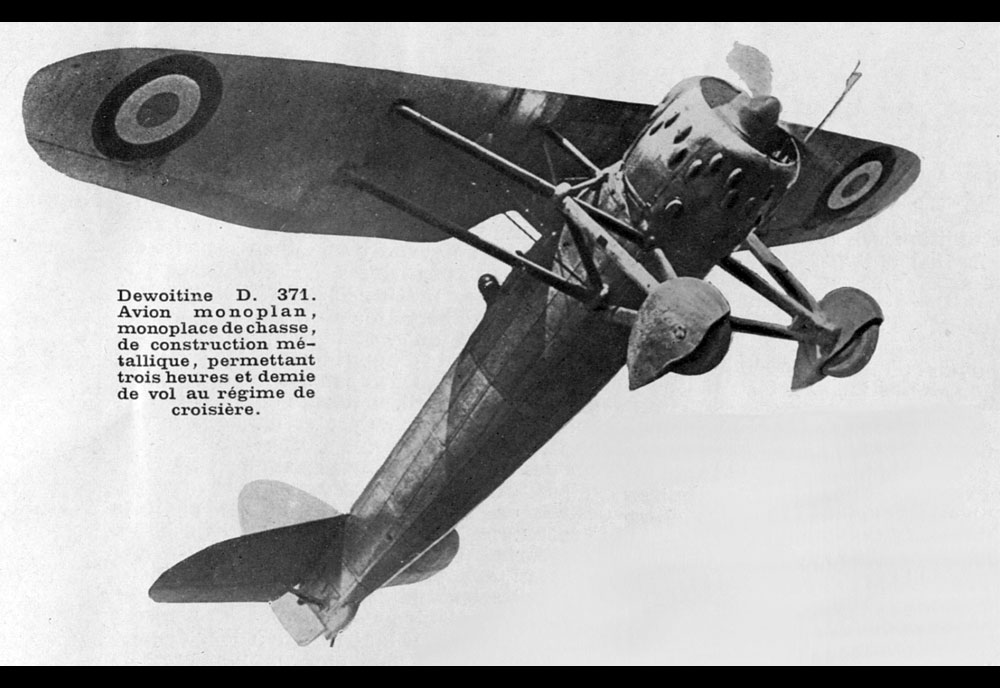 Originally part of French Air Force plans, the Dewoitine D.370 series fighter made its history with the Navy and export players.

Because of its commitment to the D.50bis (to become the D.500 fighter), French aero-concern Dewoitine passed management of its private-venture D.37 project to Liore-et-Olivier (LeO). The D.37 was developed to satisfy the standing French Air Force C1 fighter program of 1930, the new handlers taking the original Emile Dewoitine design through its prototype, flight-testing, and production phases. Eventually becoming the "D.370", this monoplane fighter appeared under various successive brand labels before the end - including Dewoitine, SNCAM, and SNCASE. The aircraft was a contemporary to types such as the American Curtiss P-6 Hawk, the British Hawker Fury, and the Nazi German Heinkel He 51.

The prototype went airborne for the first time on October 1st, 1931 with its Gnome-Rhone 14Kbrs "Mistral Major" 14-cylinder, twin-row air-cooled radial piston engine at the nose. The arrangement was typical of many Interwar period fighters with open-air cockpit, fixed tail-dragger undercarriage, and braced parasol wing mainplane member. Various engine fits were then trialed and the cowling design appropriately revised. Further changes involved the mainplanes and a reworked undercarriage.

With the changes in place, the second prototype arrived as the D.371 of February 1934. This version also served as the initial production standard to serve the French Armee de l'Air air service. The version carried the uprated Gnome-Rhone 14Kfs engine instead - which offered 930 horsepower. Beyond this, the production model was given 4 x 7.5mm MAC 1934 machine guns in underwing placements - since the weapons sat outside of the propeller arc, no interrupter / synchronization gear was needed. Wheel brakes were also added to the design. A total of twenty-nine fighters were built to this standard with the last specimen leaving the factory floor in December of 1935.

The Spanish Republic acquired - through unofficial avenues - about a dozen or so unarmed versions of the D.371 fighters during August of 1936. Three armed forms then followed before the end of the year and the trio were used as bomber escorts en route to enemy targets at Toledo, managing to keep their wards alive during the sortie (facing off against He 51 biplanes no less). The series was in play until the Polikarpov I-15 and I-16 models began arriving from Russia. This left the D.371 without a defined frontline role and the trio were relegated to trainer duty from then on. Many of the fleet were subsequently lost during the bombing of Banolas by the German-led "Condor Legion" serving alongside Nationalist Spanish forces.

The next version became the D.372, these not having the wheel brakes of their precursor. The same engine was in play but the machine gun battery was revised to include a pair of 7.7mm Browning machine guns fitted over the engine mounting, this time synchronized to fire through the spinning propeller blades, while retaining wing-mounted machine guns (in the form of Darne types). Beyond this, some were finished with underwing-mounted 20mm cannons for a heftier offensive punch. About fourteen of this mark are believed to have been completed but for the Lithuanian Air Force. However, their ownership soon changed hands to the Spanish Republican Air Force which fielded them with their new D.371 fighters and the Lithuanians shifted to the D.501 series.

The French Navy took on nineteen D.373 which were navalized variants powered by a Gnome-Rhone 14Kfs engine of 880 horsepower. These carried the 4 x MAC 1934 machine gun arrangement of the D.372. Another twenty-five navalized fighters emerged under the D.376 designation for the French Navy, these having folding wings for improved shipborne storage.

SYNCHRONIZED / INTERRUPTOR GEAR Automatic weapons are synchronized to fire through the spinning propeller blades via special mechanical gear arrangement.
RUGGED AIRFRAME Inherent ability of airframe to take considerable damage.
HIGH-SPEED PERFORMANCE Can accelerate to higher speeds than average aircraft of its time.
HIGH-ALTITUDE PERFORMANCE Can reach and operate at higher altitudes than average aircraft of its time.
EXTENDED RANGE PERFORMANCE Capability to travel considerable distances through onboard fuel stores.
SUPER PERFORMANCE Design covers the three all-important performance categories of speed, altitude, and range.
MARITIME OPERATION Ability to operate over ocean in addition to surviving the special rigors of the maritime environment.
BAILOUT PROCESS Manual process of allowing its pilot and / or crew to exit in the event of an airborne emergency.

(Showcased performance specifications pertain to the Dewoitine D.371 production variant. Compare this aircraft entry against any other in our database. View aircraft by powerplant type)
STANDARD (D.371):
4 x 7.5mm MAC 1934 machine guns under the wings (two guns to a wing).