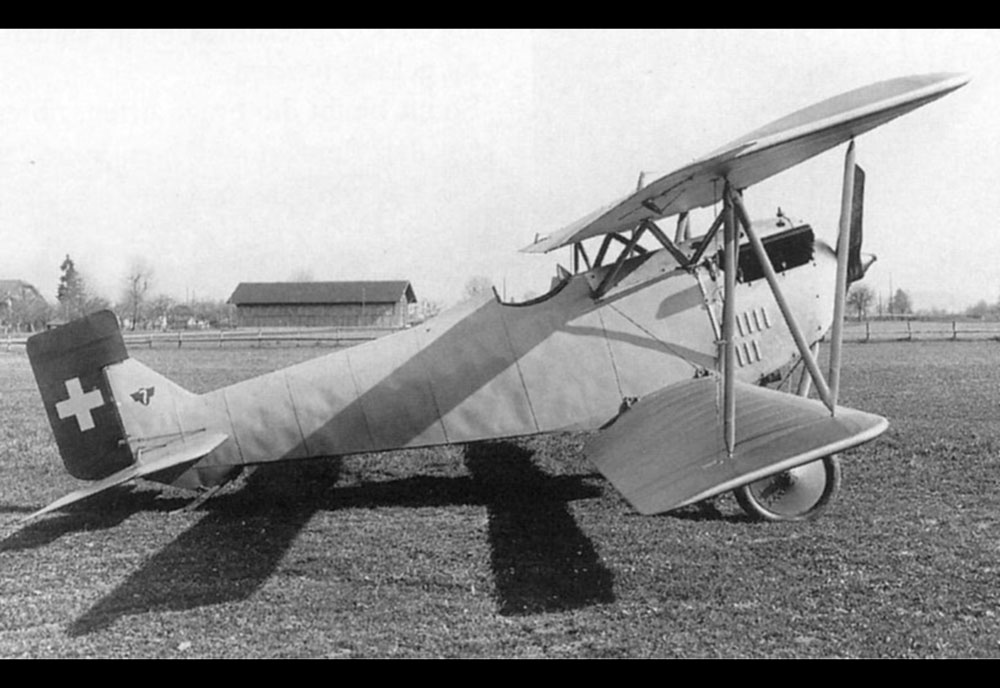 The Militar-Apparat MA-7 prototype fighter was the last notable Hafeli fighter entry for the nation of Switzerland.

The Swiss-originated Hafeli MA-7 stood as something of a failed culmination of a line that began with the earlier Hafeli DH-2 of 1916. The single-seat, single-engine biplane was developed as a fighter with the Swiss Air Force in mind, utilizing all of the lessons learned from the Air War of 1914-1918. August Hafeli, having built a body of work with time spent at A.G.O. of the German Empire before transitioning to K+W of Switzerland, once-again headed development of an aircraft which would bear his name.

NOTE: The MA-7 is also known as the "K+W MA-7" (K+W being the builder) and is formally designated the "Militar-Apparat MA-7".

The MA-7 was developed to satisfy a standing Federal Military Department requirement of the Swiss Air Force for an all-modern day fighter. The Hafeli approach relied on the proven over-under biplane wing structure while construction involved fabric-over-wood covering being used alongside metal used at critical sections of the aircraft. Instead of parallel struts at the mainplanes as seen in previous Hafeli entries, N-type supports were used to brace the upper and lower wing members. The initial prototype form carried the locally-built (under license) Hispano-Suiza 8Fb HS-42 V-8 water-cooled piston engine developing 300 horsepower driving a two-bladed propeller at the nose. K+W was charged with the construction of the aircraft.

Armament would center on 2 x 7.45mm machine guns set at the nose and synchronized to fire through the spinning propeller blades.

A first-flight was recorded during 1925 and trials with the Swiss Air Force followed from February 1926 until April 1926, at which point the design was found to be lacking in performance and stability, leading the specimen to be returned to the manufacturer for necessary changes. K+W responded by succeeding the original HS-42 engine with the still-experimental - though more powerful - LFW-12 "X-1" engine of 400 horsepower in an attempt to enhance performance (the engine was the product of the Swiss locomotive and Machine Works). However, the powerplant proved too heavy and dimensionally large for the existing airframe to accept without a total reworking of the aircraft. As such, it was decided to abandon additional work on the MA-7 - leaving the Swiss Air Force to take on the French-made, all-metal Dewoitine D.1 fighter instead.

Just the single prototype was constructed for the MA-7 project.

As built, the MA-7 was given a length of 21.7 feet, a wing span of 32.5 feet, and a height of 9.1 feet. The single-engine arrangement and general airframe configuration allowed for a maximum speed of 160 miles-per-hour to be achieved with cruising speeds near 145mph. Range was out to 190 miles and its service ceiling could reach 24,900 feet (indeed, April 1926 saw pilot Max Cartier set a Swiss Air Record of 32,200 feet in the MA-7). Rate-of-climb was 1,810 feet-per-minute.

SYNCHRONIZED / INTERRUPTOR GEAR Automatic weapons are synchronized to fire through the spinning propeller blades via special mechanical gear arrangement.
MULTI-WINGED Addition of more mainplanes to enhance inherent agility, providing a tactical edge in tight engagements.
RUGGED AIRFRAME Inherent ability of airframe to take considerable damage.
HIGH-SPEED PERFORMANCE Can accelerate to higher speeds than average aircraft of its time.
HIGH-ALTITUDE PERFORMANCE Can reach and operate at higher altitudes than average aircraft of its time.
BAILOUT PROCESS Manual process of allowing its pilot and / or crew to exit in the event of an airborne emergency.

(Showcased performance specifications pertain to the Hafeli MA-7 production variant. Compare this aircraft entry against any other in our database. View aircraft by powerplant type)
2 x 7.45mm machine guns mounted over the nose and synchronized to fire through the spinning propeller blades.