The Tupolev Tu-142 Bear was an Anti-Submarine Warfare offshoot of the original Tu-95 Bear family line appearing during the Cold War. 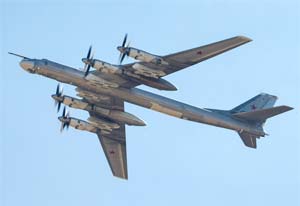 As the Tupolev Tu-95 "Bear" proved a successful strategic bomber across several roles for the Soviet military, a dedicated maritime reconnaissance and Anti-Submarine Warfare variant was evolved from the same airframe as the Tu-142 (NATO codename of "Bear-F" and "Bear-J"). The Tu-142 was given a lengthened fuselage and received a maritime-minded search radar within a ventral radome. It could be outfitted with anti-ship missiles, torpedoes, naval mines and sonobuoys to counter the threat being posed by more advanced ballistic missile submarines beginning to emerge from the West (armed with the "Polaris").

At the heart of the Tu-142 was its onboard equipment which was half of the system (the other being its weaponry). The equipment allowed for the detection, tracking and engagement of undersea vessels coupled with the inherent long-range qualities of the original Tu-95. Also retained was the general four-engine configuration which included swept-back wing surfaces, a traditional tail unit and a slim fuselage. The undercarriage was retractable and of the tricycle arrangement. The operating crew typically numbered 11 personnel.

Design work on a dedicated sub-hunter began back in the 1960s. The Tu-95PLO study emerged from this and cleared to carry upwards of 19,800lbs of ordnance but lacked the needed detection/tracking system which led to the project falling to naught. The idea of a dedicated ASW aircraft then returned in early 1963 when Tupolev was charged by the government with the same requirement. Taking the Tu-95RT (Maritime Reconnaissance and Signals Intelligence) as a starting point, the aircraft was given the proper search radar (based on the one used in the Ilyushin Il-38 "May" line) and full naval weapons capability. A specialized navigation system ensured proper and safe travel over water and a dedicated Electronic CounterMeasures kit was installed. An electronics package allowed for reconnaissance in the SIGnals INTelligence role. The wings were only slightly modified from the original Tu-95 with wing area increased for better lift and control. The twin 23mm cannon arrangement in the tail was reduced to one. The undercarriage was revised to a Navy requirement for operations from rough runways. The aircraft differed enough from the original Tu-95 line that it was granted its own designation of Tu-142. For NATO, the series remained under the "Bear" codename.

First flight of a Tu-142 prototype occurred on July 18th, 1968. A second and third prototype joined the stable by the end of the year. Following the requisite testing and evaluation period, the type was formally adopted by the Soviet Navy. Deliveries commenced in 1970. Early versions were marked by NATO as "Bear-F".©MilitaryFactory.com
Advertisements

The Tu-142MK was delivered with reduced mission capabilities and English labeling to the Indian Navy as the Tu-142MK-E. Eight aircraft were part of the deal.

The Tu-142MZ was a Mid-Life Upgrade (MLU) intended to keep the Tu-142 a viable ASW platform against new-generation submarines of the West. All new equipment and an improved ECM kit became part of the mix while new Kuznetsov NK-12MP engines of 14,795 horsepower were installed. The engines no longer required the services of an external power unit for starting. These models were also noted for their revised chin fairings. Development spanned the mid-1980s and joined the Soviet Navy in 1993. 1994 marked the final "Bear" to leave the assembly line after 100 aircraft had been built.

As with the service life of the Tu-95 before it, several "special mission" and experimental aircraft were developed from the Tu-142 line including the Tu-142MZ-K commercial cargo freighter (not adopted), the Tu-142MP avionics testbed, the Tu-142MR submarine communications relay platform and the Tu-142LL turbofan-powered testbed (two examples built).

The modern Russian Navy still utilizes the Tu-142 though in limited numbers (about 22 in service with plans to modernize the fleet with a new bombing system). Ukraine took on stocks of ex-Soviet Tu-142s after the fall of the Soviet Union though these were scrapped with the STrategic Arms Reduction Treaty ("START-1") agreement between the United States and Russia. Similarly, the Indian Navy no longer operates their Tu-142MK-E model aircraft - the last given up in March of 2017 after nearly three decades in service. The Boeing P-8 Poseidon was selected to replace them in same role.©MilitaryFactory.com
Note: The above text is EXCLUSIVE to the site www.MilitaryFactory.com. It is the product of many hours of research and work made possible with the help of contributors, veterans, insiders, and topic specialists. If you happen upon this text anywhere else on the internet or in print, please let us know at MilitaryFactory AT gmail DOT com so that we may take appropriate action against the offender / offending site and continue to protect this original work.
Advertisements

(Showcased performance specifications pertain to the Tupolev Tu-142 (Bear-F) production variant. Performance specifications showcased above are subject to environmental factors as well as aircraft configuration. Estimates are made when Real Data not available. Compare this aircraft entry against any other in our database or View aircraft by powerplant type)
STANDARD:
1 x 23mm Automatic cannon in tail position (facing aft).

General Assessment
Firepower
Performance
Survivability
Versatility
Impact
Values are derrived from a variety of categories related to the design, overall function, and historical influence of this aircraft in aviation history.
Overall Rating
The overall rating takes into account over 60 individual factors related to this aircraft entry.
80
Rating is out of a possible 100 points.
Relative Maximum Speed
Hi: 750mph
Lo: 375mph
This entry's maximum listed speed (575mph). 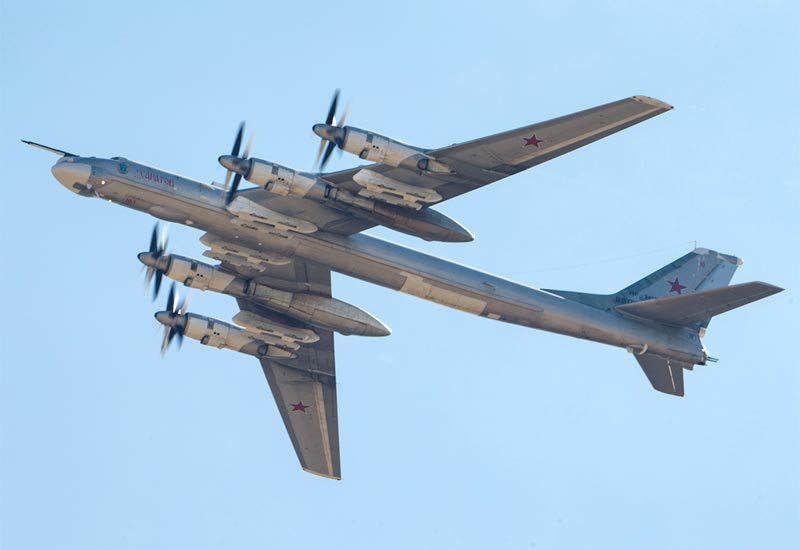 Image from the Russian Ministry of Defence.
2 / 10 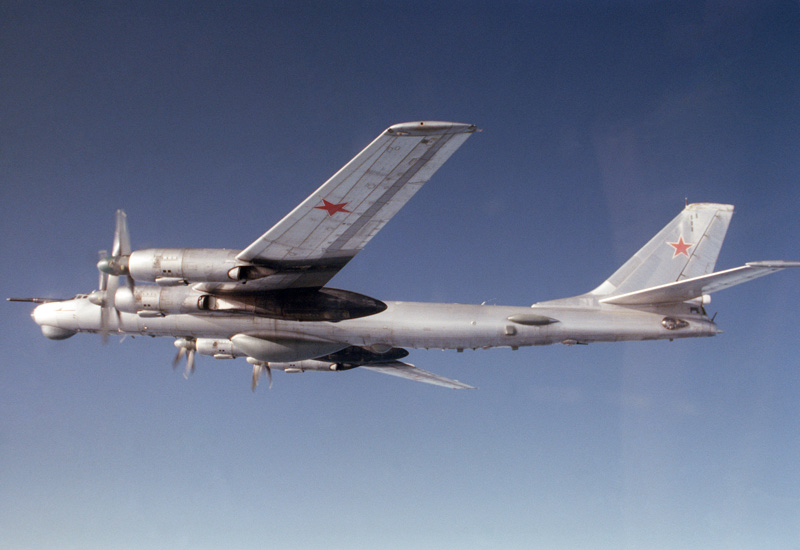 Image courtesy of the United States Department of Defense.
3 / 10 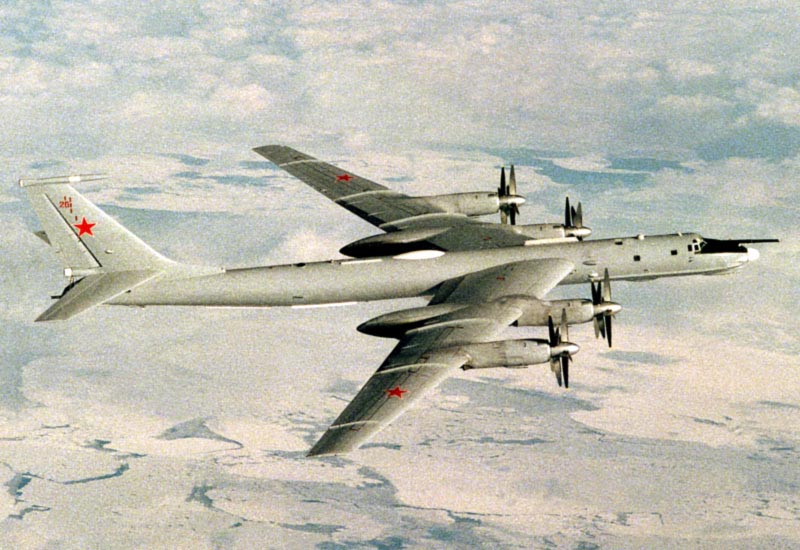 Image courtesy of the United States Department of Defense.
4 / 10 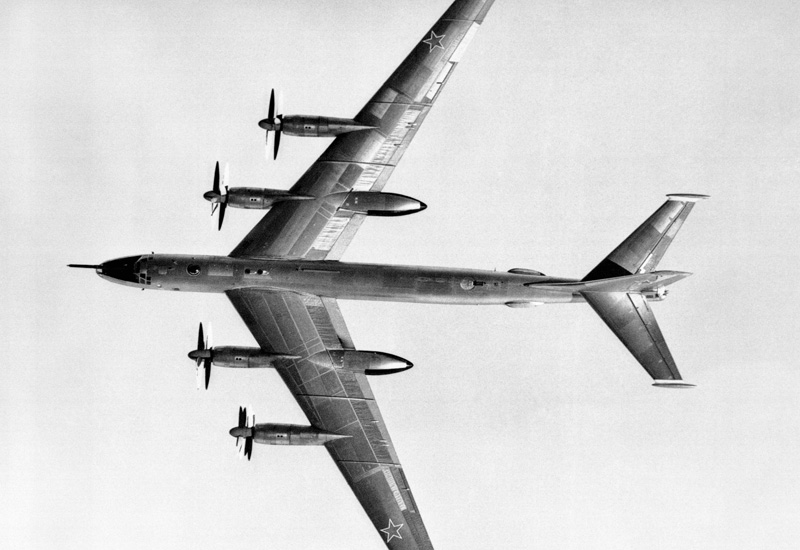 Image courtesy of the United States Department of Defense.
5 / 10 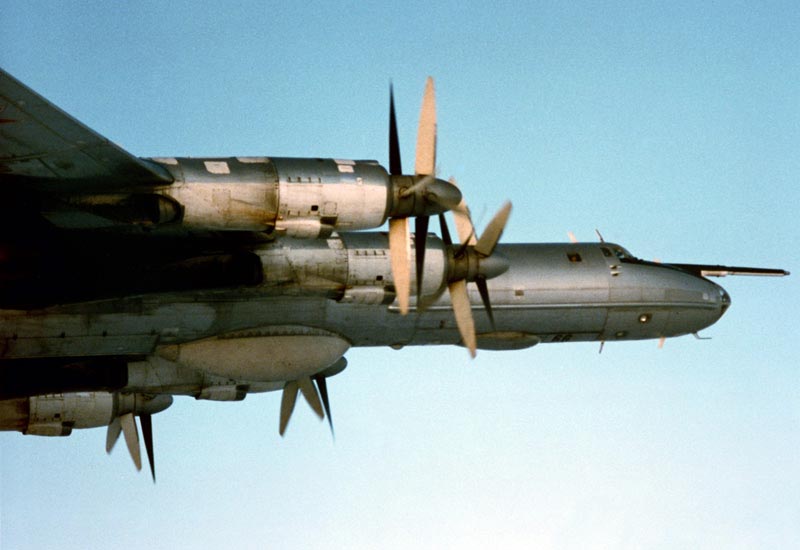 Image courtesy of the United States Department of Defense.
6 / 10 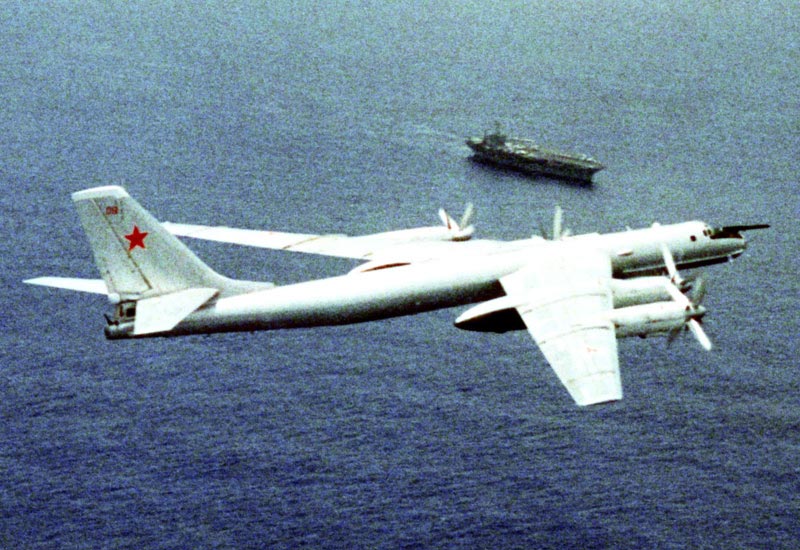 Image courtesy of the United States Department of Defense.
7 / 10 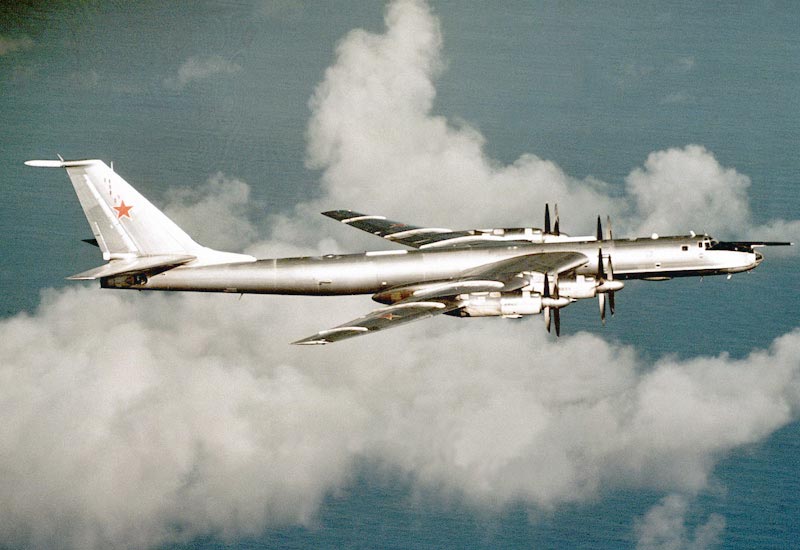 Image courtesy of the United States Department of Defense.
8 / 10 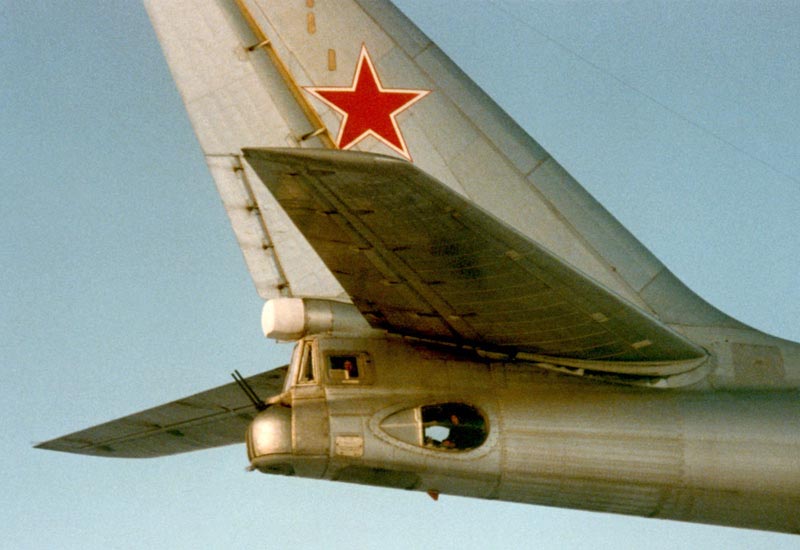 Image courtesy of the United States Department of Defense.
9 / 10 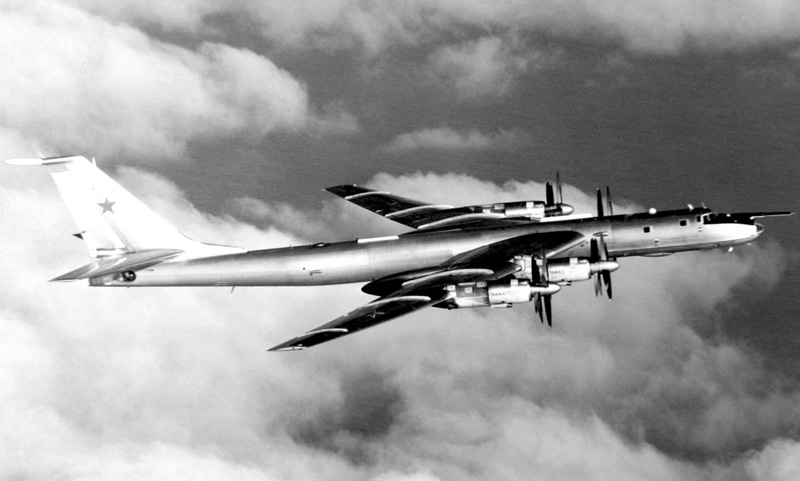 Image courtesy of the United States Department of Defense.
10 / 10 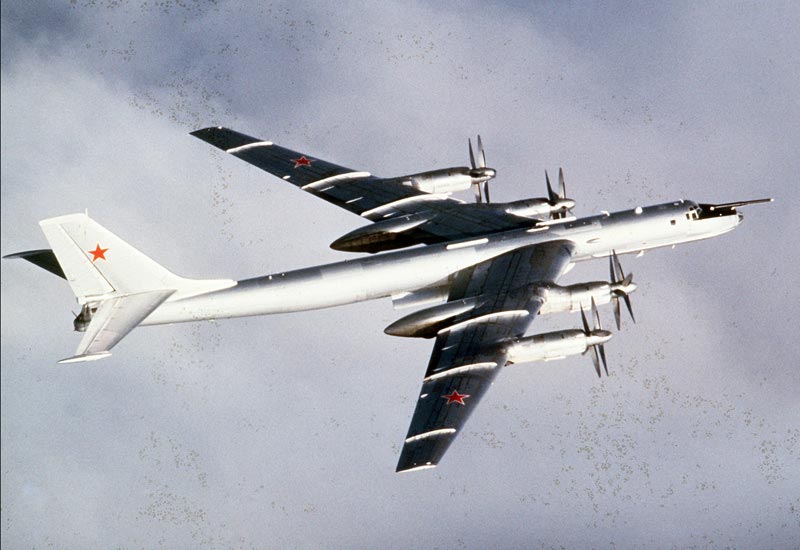 Aviation developments of similar form and function, or related to, the Tupolev Tu-142 (Bear)...