The Yokosuka Tenga was planned as a relatively simple turbojet conversion of the proven Yokosuka P1Y medium bomber during World War 2.

Authored By: Staff Writer | Last Edited: 08/06/2021 | Content ©www.MilitaryFactory.com | The following text is exclusive to this site. 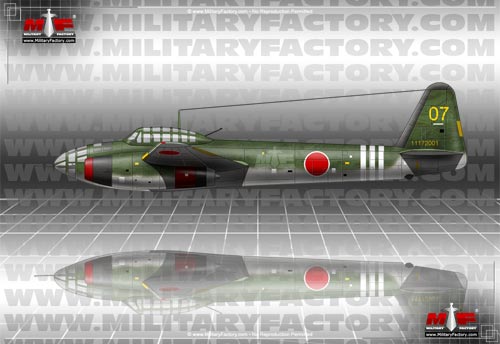 Throughout World War 2 (1939-1945), the Empire of Japan was limited in its medium bomber options (unlike its adversaries in the United States and Britain). Its air services made due with the very-capable Mitsubishi G4M ("Betty") which flew from 1941 until the end of the war in 1945 and some 2,435 examples were built in that stretch. The Yokosuka P1Y "Ginga" was developed as its direct successor but this entry arrived in the latter part of the conflict - serving from October 1944 until August of 1945, the end of the war. Total production of this mount equaled 1,102 units, certainly not enough to make an impact.

Yokosuka produced three prototypes of the P1Y while Nakajima and Kawanishi both had a hand in series production during the flying life of this aircraft. In service, the new medium bomber performed even if restricted by its underperforming "Homare" radial engine set and various marks went on to be developed from the base design including intruder, bomber interceptor, suicide aircraft carrier, and fast bomber forms - such was its inherent versatility.

In time, thought was placed into making jet-powered fast bomber and Japanese engineers turned to the P1Y to help expedite development - giving rise to the short-lived "Tenga". It was expected that such a conversion process would produce a capable fast bomber with all of the strong traits of the with the performance of a jet-powered platform - a design akin to the German Luftwaffe's own Arado Ar 234 "Blitz" twin-engined, jet-powered fast bomber (which also could double in the fast-reconnaissance role). This process would have left much of the Ginga's fuselage intact with changes centering mainly on the wing mainplanes expected to take on the turbojet powerplant.

With this assumption, the Tenga was to carry an operating crew of three, feature a running length of 49.2 feet, a wingspan of 65.6 feet, and a height of 14 feet.

If taking the contemporary Arado Ar 234 as a standard for two-engined fast bomber, the Tenga would have had a maximum speed of around 450 miles-per-hour, a cruising speed of 425 mph, a service veiling of about 30,000 feet, and a range just beyond 950 miles. Rate-of-climb would have been 2,500 feet-per-minute or so.

As in the German approach, the Japanese design would center around a slim, sleek fuselage containing all crew positions, avionics, and fuel stores - glazed and rounded at the nose with a tapering empennage. The crew section would be covered over in a greenhouse-style framing, the cockpit/nose section being stepped in appearance. The tail unit was to use a single vertical fin with low-set horizontal planes. The mainplanes - which would have received the most attention in a redesign - were to sport rounded tips, tapering leading and trailing edges, and housed the turbojet installations. A "tail-dragger" undercarriage would provide for the needed ground-running capability with the main legs set under each nacelle and a tailwheel bringing up the rear - all legs being retractable.

Japan began working on turbojet technology as early as 1942 and developed various types throughout the remainder of the war years. The first of the line became the Ne-0 ("Burning Rocket" 0), a low-powered ramjet-based system which was then followed by the Ne-1 and Ne-3 of axial flow types while the Ne-2 and Ne-4 satisfied the centrifugal technology route. More advanced forms came later through the Ne-12 and Ne-15 entries, the latter standing in as the basis for the improved Ne-20 - the first and truly notable turbojet development to emerge from Japan during the war.

The subsequent Ne-30 was, therefore, expected to best the output power of even the famous German BMW 003 and Jumo 004 offerings of the time. Against this backdrop, it was seen that the Ne-30 would provide the new Tenga fast bomber with the necessary performance as each turbojet unit was rated in the vicinity of 1,873lb thrust, giving the aircraft a complete output power of around 3,745lb. This engine was built and extensively tested from October 1944 on but eventually suffered running issues to the point of being cancelled at the start of 1945.

Proposed armament was to be made up of a modest arrangement of a single 20mm automatic cannon at a trainable mounting in the nose and a comparable 20mm automatic cannon seated atop a trainable mounting facing the rear of the aircraft (presumably at the aft-dorsal position). These installations would have been easily replaceable with 13mm Heavy Machine Guns (HMGs) if needed. In terms of war load, the Tenga was planned to carry up to 3,525lb of drop ordnance (bombs) or a single 1,764 air-launched torpedo.

Despite the design work, the Tenga never materialized beyond the paper stage and the relatively simple concept of changing over an existing piston-powered design to a turbojet one was never truly ideal - typically more complex in real life than on paper - leaving much doubt as to the validity of the Tenga concept as a whole. The Germans envisioned a similar project with their Messerschmitt Bf 109 piston-powered fighter while the Americans toyed with the idea of a Republic P-47 "Turbobolt" (born from the famous Thunderbolt/Jug line) - both aircraft detailed elsewhere on this site.
Advertisements

Imperial Japan (cancelled at the paper stage)
(OPERATORS list includes past, present, and future operators when applicable)
✓ Ground Attack (Bombing, Strafing)
Ability to conduct aerial bombing of ground targets by way of (but not limited to) guns, bombs, missiles, rockets, and the like. ✓ X-Plane (Developmental, Prototype, Technology Demonstrator)
Aircraft developed for the role of prototyping, technology demonstration, or research / data collection. 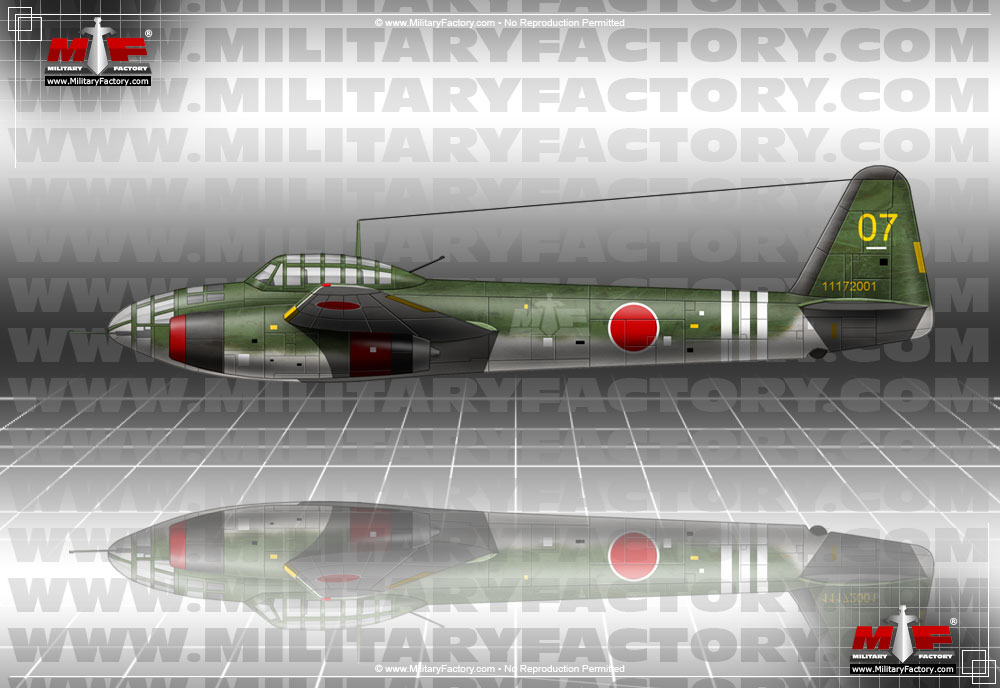 Aviation developments of similar form and function, or related to, the Yokosuka Tenga (Milky Way)...