The Focke-Wulf Volksflugzeug jet fighter was briefly proposed against the Peoples Fighter requirement for Germany in 1944.

Authored By: Staff Writer | Last Edited: 07/27/2021 | Content ©www.MilitaryFactory.com | The following text is exclusive to this site. 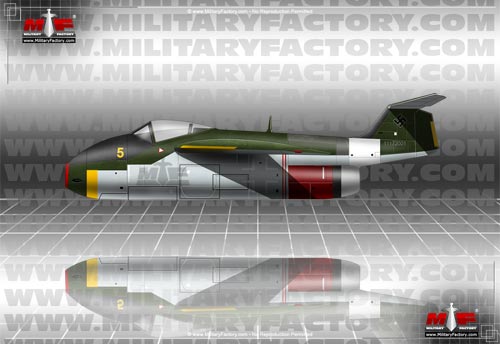 The "Volksflugzeug" ("People's Aircraft") was proposed by the German aero-concern of Focke-Wulf during the latter-half of World War 2 (1939-1945) as a simple, lightweight, single-seat/single-engine fighter solution for the defense of the crumbling Reich. The aircraft appeared in September of 1944 and was proposed in concert with other submissions to fulfill the "Volksjager" ("People's Fighter") requirement, the emergency effort to defend Germany from the onslaught of Allied day and night bombers. Like other entries in the series, the Volksflugzeug did not see the light of day - though the company did proposed both a swept and unswept wing version of their nimble aircraft. Their own technical director, Kurt Tank, held little faith in the Volksjager project as a whole, believing whatever design that was selected would become quickly outclassed by Allied developments by the middle-end of 1945.

The Volksflugzeug took shape in a mere 10 days from the formal issuance of the requirement given on September 7th/8th. Engineers drew up plans for the single-seat solution incorporating its turbojet in the belly and the wing mainplanes fitted at shoulder height. The tail unit would include high-mounted, swept-back horizontal planes along a tapering stem/boom running over the jet exhaust port at the rear. The nose was to contain the air intake for aspirating the turbojet as well as all-cannon armament. The intake duct could run unobstructed under the floor of the cockpit and the engine's position at the middle of the fuselage would ensure a short run of duct would only be needed. A retractable tricycle undercarriage would be featured for ground-running.

In the swept mainplane version, the shoulder-mounted wings were given sweep along both the leading and trailing edges so as to play up the aerodynamic high-speed aspects of the design. The straight-winged version limited performance at high speeds but offered a more conventional, lower risk solution.

Power was to come from the BMW 003A-1 series turbojet engine and proposed armament became 2 x 30mm MK 108 automatic cannons, both fixed and firing forwards from under the cockpit floor.

In the end, the Heinkel 162 was selected ahead of a promising design put forth by competitor Blohm and Voss (it entered its P.210, P.211.01, and P.211.02 ideas into the running). The Volksflugzeug project was therefore dropped from any more serious work while the He 162 made it into production and limited service in the war's waning weeks.©MilitaryFactory.com
Note: The above text is EXCLUSIVE to the site www.MilitaryFactory.com. It is the product of many hours of research and work made possible with the help of contributors, veterans, insiders, and topic specialists. If you happen upon this text anywhere else on the internet or in print, please let us know at MilitaryFactory AT gmail DOT com so that we may take appropriate action against the offender / offending site and continue to protect this original work.
Advertisements

(Showcased performance specifications pertain to the Focke-Wulf Volksflugzeug production variant. Performance specifications showcased above are subject to environmental factors as well as aircraft configuration. Estimates are made when Real Data not available. Compare this aircraft entry against any other in our database or View aircraft by powerplant type)
PROPOSED:
2 x 30mm MK 108 internal automatic cannons under the nose. 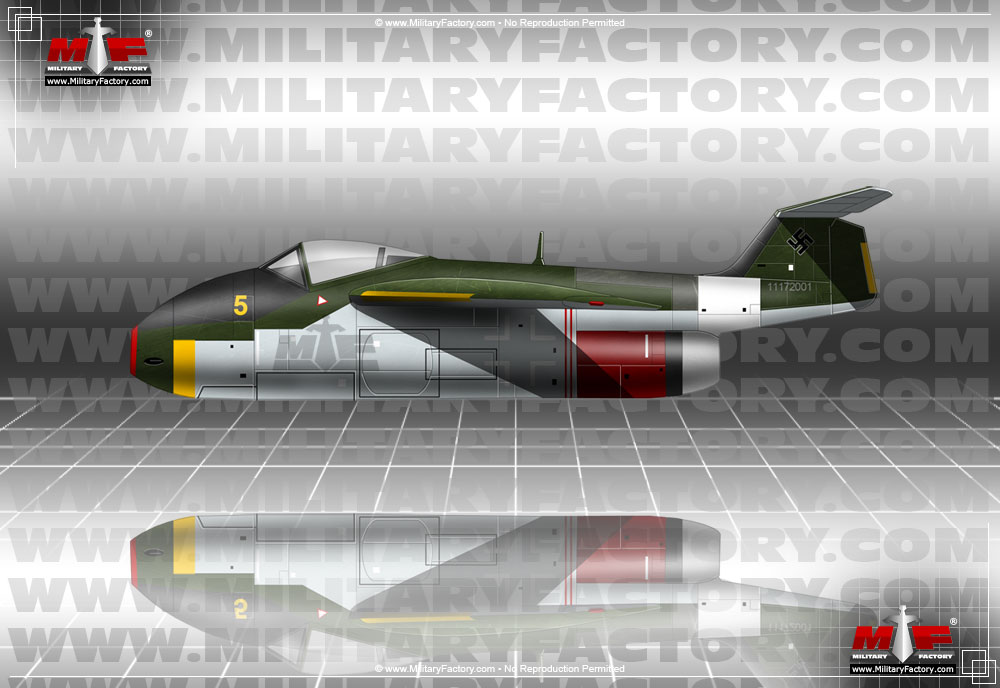