This German wartime entry from Focke-Wulf attempted to incorporate a hybrid powerplant scheme for the strike fighter role.

Authored By: Staff Writer | Last Edited: 01/07/2022 | Content ©www.MilitaryFactory.com | The following text is exclusive to this site. 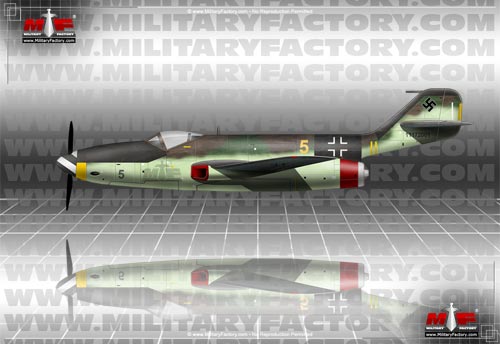 Advancement in turbojet design technology for Germany during World War 2 (1939-1945) inevitably led to a multitude of design forms emerging from the base players like Messerschmitt, Blohm und Voss, and Focke-Wulf. For Focke-Wulf, makers of the classic Fw 190 single-seat, single-engine fighter of the wartime period, the offerings were a deep stable of conventional and unconventional designs. With each new iteration, proposals grew in their promised performance figures and complexity.

The P.VII "Flitzer" was a project fighter of 1943 incorporating a twin-boom fuselage design with a centralized "pod" to hold the cockpit, engine, fuel stores, and some of the proposed cannon armament. Power was to come from a single Heinkel HeS 011 turbojet paired with a Walter HWK 109-509A liquid-fueled rocket motor for additional thrust output power. This single-seat, single-engine offering ended with only a mockup being worked on before the close of the war in Europe in May of 1945.

From this work, however, spawned a series of designs by the company which numbered seven, with one entry destined for the strike fighter role but incorporating both a turbojet engine (exhausting aft) and a propeller (mounted to the nose). The combination powerplant scheme promised all sorts of performance gains to outclass anything the Allies could field between 1942-1944. Much of the influence of the Flitzer remained including an all-cannon armament scheme, twin-boom tail unit, and single-seat configuration.

Like the Flitzer before it, this seventh design went nowhere but resulted in a refinement of the idea through a more conventional design arrangement in November of 1944. The rearrangement was mainly due to the inherent deficiencies of the twin-boom, hybrid powerplant scheme which was abandoned for the a more streamlined look showcasing traditional lines.

At its core, the strike platform remained a single-seat, hybrid-powered offering but its fuselage was a complete, sleek unit from nose to tail. The mainplanes were mid-mounted and swept-back, each root given an intake opening to aspirate the air-breathing turbojet buried within the fuselage. The engine was fitted low in the design and exhausted from under the empennage. The nose contained the prop unit just ahead of the cockpit, the cockpit itself seated just ahead of the mainplanes for excellent vision. The tail unit extended a distance away from the engine exhaust port below and was made up of a single vertical plane straddled by swept-back, small-area horizontal planes. For ground-running, a wholly-retractable tricycle arrange was to be used - giving the aircraft a slight "nose-up" attitude when on the ground.

Propulsion power would be handled by the combination Daimler-Benz DB 109-021 (Heinkel HeS011) turboprop/turbojet engine, a drive shaft used to spin the propeller blades. The propeller unit was a 9.2 foot three-bladed fixture at the nose and of variable pitch. The turboprop was rated up to 2,000 horsepower output with the jet adding some 1,697lb of thrust.

Dimensionally, the aircraft was drawn up with a length of 10.8 meters, a height of 3.1 meters, and a wingspan of 8.2 meters given 31-degrees of sweepback at the leading edge (less so along the trailing edge). Empty weight was estimated at 7,500lb against a Maximum Take-Off Weight (MTOW) value of nearly 11,000lb. This gave flexibility on the amount and types of air-dropped/air-launched ordnance that could be carried by the strike aircraft.

As far was performance was concerned, engineers believed their design could reach speeds of 560 miles-per-hour at an altitude of 30,000 feet. Range would be out to 635 miles with a mission endurance window of about 1.15 hour.

As one of the Luftwaffe's "paper airplane" projects, this Focke-Wulf entry never materialized to make any sort of impact upon the outcome of the war. The design was intriguing in that a similar project was undertaken by the Americans in the post-war period, the Republic XF-84H (originally as the XF-106) of which only two prototypes were completed. The performance gains were there but the complexity and other available options moved to doom such expensive, novel projects in the build-up of the Cold War sides.

Nevertheless, the Focke-Wulf turbo-prop / turbojet single-seat strike fighter would have been a fascinating development for the World War 2 period - that is if German had not the great need for interceptors and fighters by war's end that it did.©MilitaryFactory.com
Note: The above text is EXCLUSIVE to the site www.MilitaryFactory.com. It is the product of many hours of research and work made possible with the help of contributors, veterans, insiders, and topic specialists. If you happen upon this text anywhere else on the internet or in print, please let us know at MilitaryFactory AT gmail DOT com so that we may take appropriate action against the offender / offending site and continue to protect this original work.
Advertisements

(Showcased performance specifications pertain to the Focke-Wulf Fw P.TSF production variant. Performance specifications showcased above are subject to environmental factors as well as aircraft configuration. Estimates are made when Real Data not available. Compare this aircraft entry against any other in our database or View aircraft by powerplant type)
ASSUMED:
2 x 30mm automatic cannons under the nose.
2 x 20mm autocannons in the wingroots (one gun per wing root).

As a strike fighter, the platform would have been equipped to carry rockets, bombs, and external fuel tanks.

P.TSF - "Turboprop Strike Fighter"; no official designation was given this design. 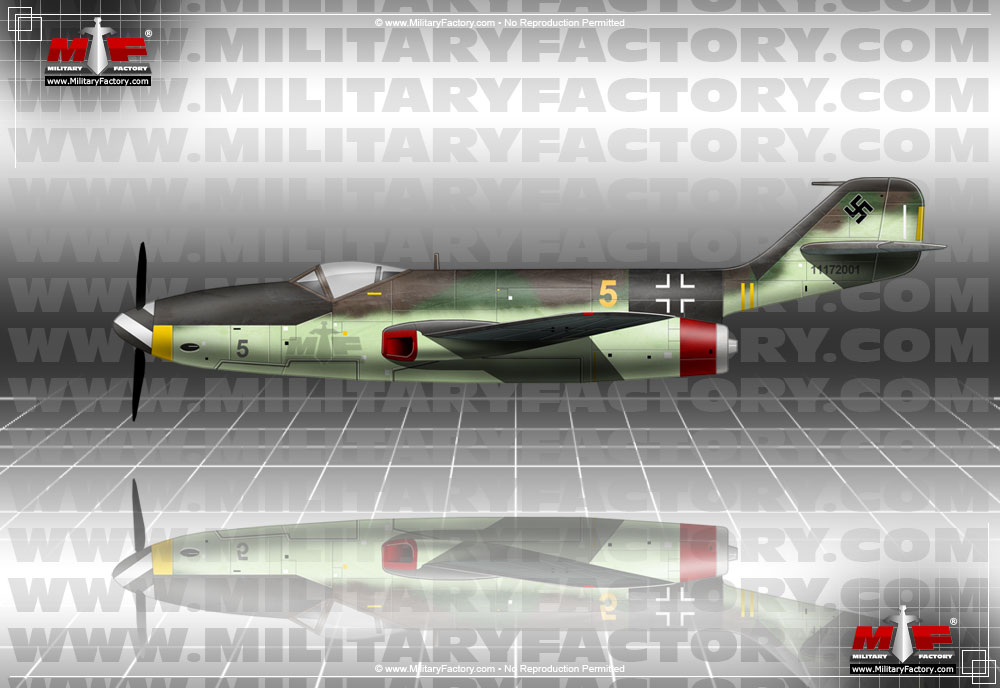