The export-minded Sukhoi Checkmate is an all-modern lightweight fighter offering from Russia with inherent stealth characteristics. 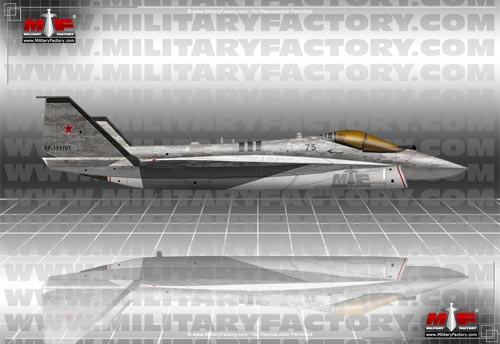 The Sukhoi "Chekcmate" 5th Generation lightweight stealth fighter is the latest combat aircraft offering from Russia, the entry viewed to be a low-cost, stealth-minded offering by Russia for interested export parties. The design is sponsored by Rostek State Corporation (UAC) and was teased in the days leading up to the MAKS 2021 air show outside Moscow. The aircraft appears to borrow design lines from both the American Lockheed Martin F-35 "Lightning II" strike fighter and the Russian Sukhoi Su-57 "Felon" multi-role fighter, both featuring inherent stealth characteristics as well as 5th Generation classification.

At its core, the fighter in question is of single-seat, single-engine configuration with proven external stealth characteristics including fuselage chine running from nose to tail. The cockpit is seated aft of a short nosecone, presumably shrouding an all-modern radar unit. The fuselage is deep, tapered at the nose and tail ends, and assumed to house an internal weapons bay or bays. Interestingly, the air inlet is fitted ventrally, allowing for clean air intake to the turbofan within the middle-aft of the fuselage (the Lockheed F-16 "Fighting Falcon" and Eurofighter "Typhoon" multirole types both feature this design quality). The new fighter also bears some similarities to the Boeing X-32, a prototype strike fighter which unsuccessfully competed with the X-35 for the role eventually fulfilled by the F-35 Lighting II design. The exhaust port of the engine, bookended at the rear of the fuselage by the tailfins, is circular.

The mainplanes are of relatively small-area delta shape, negating the need for traditional horizontal tailplanes. The tailplanes featured are outward-canted, believed to be all-moving, and cover the role of vertical and horizontal planes seen in more conventional fighter designs.

Estimate performance figures indicate a maximum speed beyond Mach 2.0. Gross Take-Off Weight (GTOW) is assumed to be in the 20 ton (short) region. Comparatively, the F-35 reaches speeds of Mach 1.6 at altitude and sports a gross weight of 25 tons. The F-16 Block 50/52 aircraft has a maximum speed of Mach 2.05 and a GTOW of 13.25 tons. As such, the Checkmate may feature performance and battlefield capabilities somewhere between this 5th and 4th (respectively) fighter designs.

It is accepted that the Checkmate aircraft on display at MAKS is a full-sized mockup and not a full-fledged, flyable prototype. Additionally, base on the tail number on display, the fighter may carry the official designation of "Su-75" in service.

Named prime candidates for the Checkmate appear to include Argentina and Vietnam who both field an aging feet of primary 4th Generation (or older) fighters. India always remains in the running for new Russia fighter types as well while the Checkmate may very well be used as a lightweight counterpart to the heavier Su-57 for the Russian Air Force, as the Mikoyan MiG-29 "Fulcrum" has been to the Sukhoi Su-27 "Flanker" series for decades.

NOTE: Structural dimensions and performance specifications showcased on this page are estimates on the part of the author. Data will be updated as new information allows.

November 2021 - The Sukhoi Su-75 is being showcased at the Dubai aerospace event, United Aircraft Corporation hoping to interest the UAE in the lightweight stealth fighter design.

November 2021 - The first of several flyable Checkmate airframes have entered the assembly phase according to UAC.

RADAR-CAPABLE Houses, or can house (through specialized variants), radar equipment for searching, tracking, and engagement of enemy elements.
COUNTERMEASURES Survivability enhanced by way of onboard electronic or physical countermeasures enacted by the aircraft or pilot/crew.
WING SWEEPBACK Mainplanes, or leading edges, features swept-back lines for enhanced high-speed performance and handling.
HIGH-SPEED PERFORMANCE Can accelerate to higher speeds than average aircraft of its time.
HIGH-ALTITUDE PERFORMANCE Can reach and operate at higher altitudes than average aircraft of its time.
PILOT / CREW EJECTION SYSTEM Assisted process of allowing its pilot and / or crew to eject in the event of an airborne emergency.
CREWSPACE PRESSURIZATION Supports pressurization required at higher operating altitudes for crew survival.
ENCLOSED CREWSPACE(S) Features partially- or wholly-enclosed crew workspaces.
RETRACTABLE UNDERCARRIAGE Features retracting / retractable undercarriage to preserve aerodynamic efficiency.

(Showcased performance specifications pertain to the Sukhoi Checkmate production variant. Compare this aircraft entry against any other in our database or View aircraft by powerplant type)
Unknown. Assumed internal automatic cannon for close-in work. Also support for precision-guided drop bombs / munitions as well as air-launched air-to-air and air-to-surface missiles of Russian origin.

(Not all ordnance types may be represented in the showcase above)
Hardpoint Mountings: 5
Mounting Points 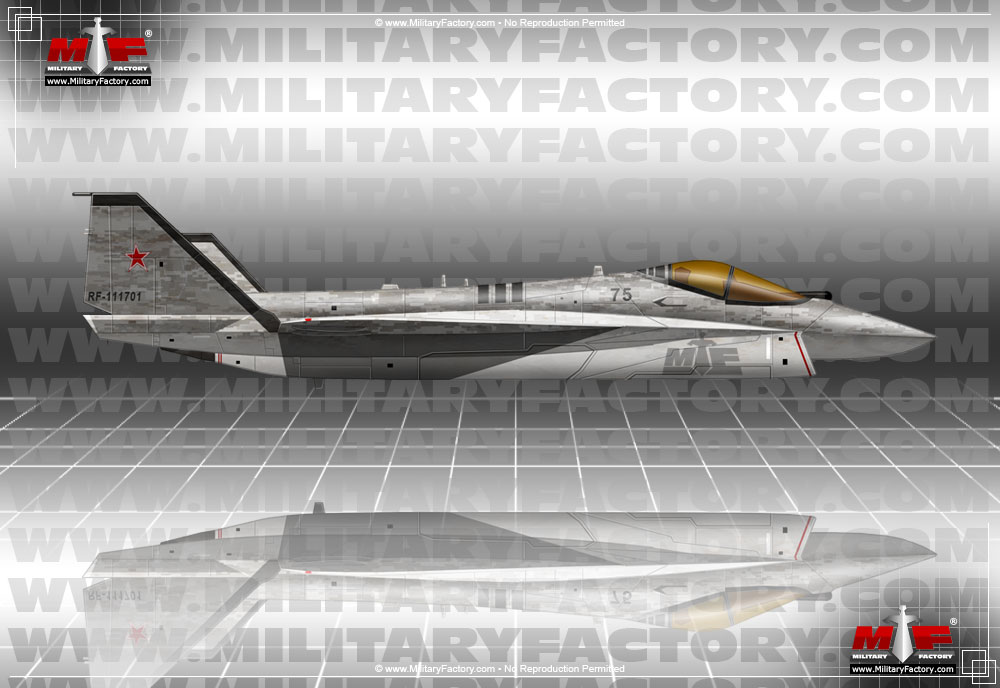 Aviation developments of similar form and function, or related to, the Sukhoi Checkmate (Su-75)...