The Dornier P.252 project aircraft encompassed three distinct proposed forms - all of which came to naught with the end of World War 2 in 1945.

Authored By: Staff Writer | Last Edited: 11/07/2020 | Content ©www.MilitaryFactory.com | The following text is exclusive to this site. 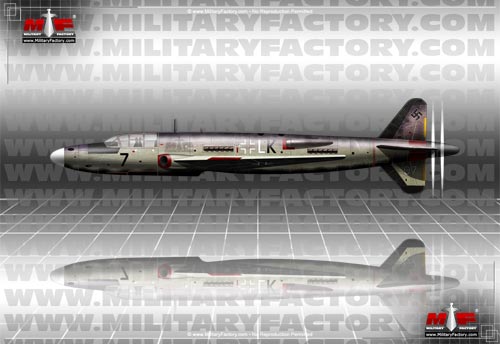 Dornier's experience in developing its unique Do 335 "Pfeil" ("Arrow") fighter-bomber / very-fast-bomber led the concern to realize the relative inefficiency of a nose-mounted engine ("puller") coupled with the propulsion power of a tail-mounted engine ("pusher"). While this made for one very fast prop-driven aircraft at 474 miles-per-hour, it restricted nose installations (in terms of armament and equipment) and reduced pilot vision out-of-the-cockpit. Thought was therefore given to a similarly large fighting aircraft of modern design in which the two propeller units were seated at the rear of the aircraft, the engines themselves to be seated inline and aft of the cockpit - leaving the nose completely available for armament and radar.

Design studies for a capable, high-performance night-fighter were being undertaken by Dornier as early as August 1941 and this work resulted in a handful of promising projects. It was not until the Do 335 took shape and was flown for the first time in October of 1943 that data on the unique twin-engine configuration could be collected and digested by engineers. Introduced in 1944, the Do 335 operated for only a short time in what was left of the war (the conflict would end in 1945) and production yielded just 37 total units before the end.

There were several notable offshoots of the Do 335 and this included the jet-powered "P.256" (detailed elsewhere on this site). Another, more conventionally-powered offering, became the "P.252" project aircraft - which utilized the aforementioned "twin-pusher" prop arrangement.

The Do 335's influence could be seen in the design lines chosen for the P.252. The design was a large, heavy-class fighter seating its crew under a heavily-glazed cockpit aft of a nosecone. The dorsal fuselage line was elevated behind the pilot so this restricted vision to the rear consequently adding more internal space for fuel, life support, and avionics. The fuselage was well-streamlined, slim, and long, tapering at the tail - which seated a cruciform-style tailplane arrangement (including a shorter ventral plane). Aft of the tail were the twin propeller units. Like the Do 335, a very-modern tricycle undercarriage was fitted for ground-running.

The wing mainplanes were given sweepback, dihedral, and rounded tips and intakes were positioned at the roots (these feeding the forward engine installation). Air scoops were also positioned at the fuselage port and starboard sides (feeding both engines) while exhaust ports for each engine were found along the sides of the airframe.

Design work on the aircraft took place in 1943 but it was not until January 1945, with data in hand and a standing need for a new, highly-capable Luftwaffe night-fighter, that the P.252 gained steam. It was seen that the rear-mounted engine approach allowed the nose of the fighter to accept both heavy armament and radar (and give the pilot excellent frontal vision) to make for one complete "bomber-destroyer" ("Zerstorer") machine. Dornier drew up plans for three distinct possible in-service forms as the "P.252/I", "P.252/II", and "P.252/III".

The P.252/I was completed as a two-seater (the crew seated back-to-back) during February of 1945. The second crewman was the dedicated radar operator and helpful in reducing the mission workload. The wing mainplanes in this proposal were straight as opposed to swept back.

The P.252/II added a third crewman which forced an extension of the fuselage (and thus an increase in operating weight).Wing sweep reached 35-degrees in this entry with a wider span over that seen in the P.252/I.

Then followed the P.252/III which reduced the wing sweep, added more mainplane surface area, and increased internal fuel loads for extended operating ranges. A large air scoop was also added to the base of the dorsal tail fin. The P.252/III was drawn up with a length of 56.4 feet, wingspan of 51.9 feet, and height of 16.5 feet.

The primary engine of choice became the Junkers Jumo 213J series liquid-cooled 12-cylinder engine, two to be seated inline in the middle and act sections of the fuselage. Each unit offered up to 1,750 horsepower at take-off, giving the fighter exceptional power and performance for the initial climb and subsequent cruising actions. MW50 boosting was also integrated for additional, albeit limited, bursts of power in combat. The engines drove a pair of 10.5-foot diameter three-bladed propeller units at the tail in contra-rotating fashion, this motion effective cancelling out the natural effects of torque seen in a single-engine design. Extension shafts mated the propeller units to their respective engines.

Estimated performance figures included a maximum speed of 577 miles-per-hour and an operating ceiling of 41,000 feet (necessitating life support and a pressurized cockpit for the crew).

The nose section was designed as a modular assembly - meaning that the P.252 could be outfitted with various radar types as well as armament options. The standard battery focused on 2 x 30mm MK 108 autocannons in the nose, 2 x 30mm MK 213C autocannons in the lower forward fuselage, and 2 x 30mm MK 108 autocannons at midships obliquely angled to fire upwards into the vulnerable belly area of an unsuspecting bomber. Beyond this was provision for 2 x 250kg or 500kg drop bombs carried under the wings (one bomb to a wing) - giving the night-fighter a fighter-bomber quality if needed.

One of the detrimental developments working against further development of the P.252 was the rising value of the turbojet engine - which at this point in the war were offering warplanes greater performance potential than piston-driven fighter types. The piston engine was reaching its apex in terms of design and output and airframes had also maximized their inherent capabilities as rocket and jet propulsion schemes were being integrated into more aerodynamically-refined aircraft featuring swept back wing mainplanes. Indeed, a February 1945 initiative by German authorities forced preference towards the turbojet over an piston-driven designs going forward - though this does not appear to have dissuaded Dornier engineers from continuing work on the P.252.

The P.252, at least on paper, did appear to have the performance to match that of the early jet fighters of the period and firepower was never in question. Like the piston engine, however, the P.252's airframe had reached its pinnacle in terms of efficiency and further gains, if any, would be very minimal. At any rate, the design joined a discarded pile of "Secret Weapons of the Luftwaffe" to come to nothing before the end of the war. The fighting in Europe ended in May of 1945 and projects like the P.252 were either abandoned by then, quickly ended by their owners, or taken over by the victors - leaving to the imagination what effect these developments would have had in the postponing the end of the war or driving it further into 1945-1946.
Advertisements 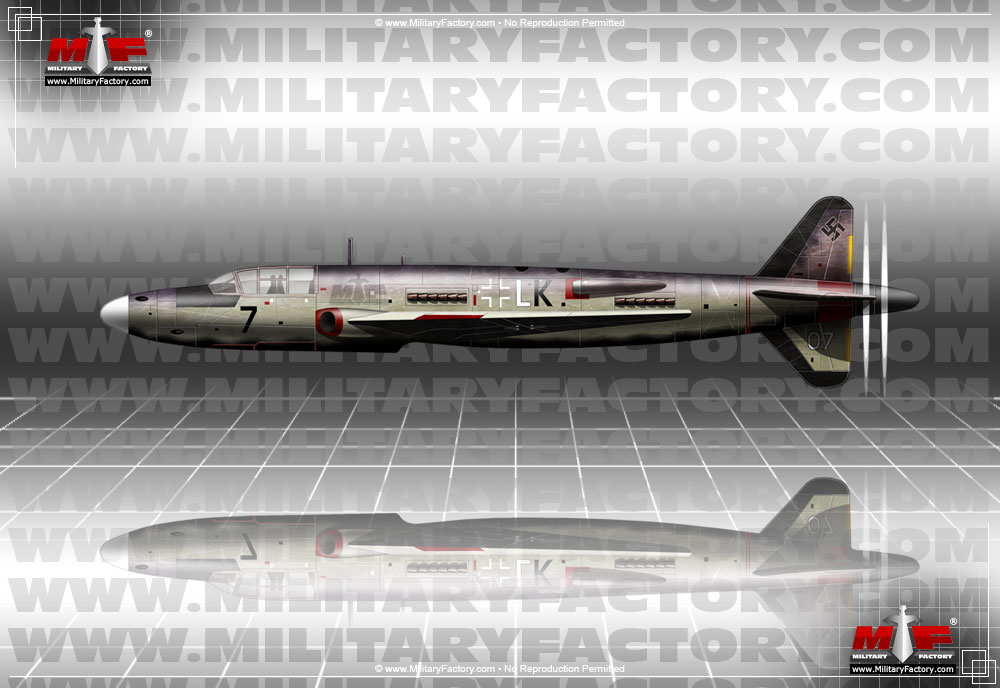