The Boeing B-47 scored many firsts in the realm of high-altitude jet-powered bomber aircraft - including a tricycle-style undercarriage configuration.

Authored By: Dan Alex | Last Edited: 05/20/2019 | Content ©www.MilitaryFactory.com | The following text is exclusive to this site. 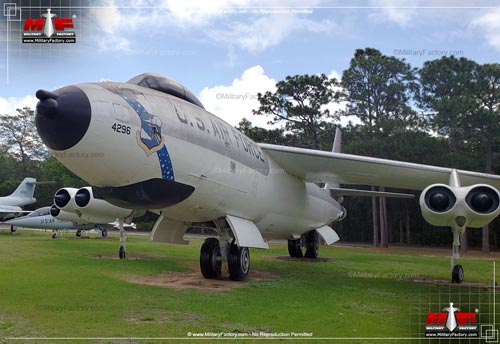 The swept-wing B-47 Stratojet produced by Boeing was a milestone in American bomber design in several ways. The system pioneered the now-traditional bomber layout found on many of today's bomber aircraft and offered up performance capabilities unheard of before then. As a post-war/Cold War aircraft design, the system was the epitome of what the American military sought in terms of high-level penetration systems capable of nuclear strikes deep within enemy territory.

The XB-47 was proposed as early as 1945 - the final year of World War 2 - and beat out a notable flying wing design proposed by the Northrop aviation firm. Two XB-47 prototypes were constructed as SN 46-065 and 46-066. Each was initially powered by 6 x Allison J35-GE-7 turbojet engines slung under each swept-back wing with both prototypes eventually receiving General Electric J47-GE-3 turbojets. The engines were split into pairings and single mounts as individual nacelles. The aircraft was crewed by three personnel made up of two pilots and a bombardier. From there, the first XB-47 achieved first flight in 1947.

With its immense size, the B-47 made use of no fewer than eighteen rocket-propelled boosters to help it achieve flight, resulting in a dazzling display of power and smoke upon take-off. To decrease runway landing distances, the Stratojet deployed a drag chute to significantly slow the airframe down upon landing - a practice utilized even today in modern aircraft types. An impressive inherent range meant that the B-47 was ideally suited to forward and rearward operating bases across Europe and the United States. In an age before accurate surface-to-air missile systems became the norm, the B-47 was really only threatened by the latest in the delta wing interceptors of the Soviet Union. As such, since the rear portion of any bomber was susceptible to attack from interceptors, the B-47 mounted two remote-controlled 12.7mm machine guns (later upgraded to 20mm cannons) in her tail. As far as her external design goes, the B-47 was conventional with a forward held cockpit (including glazed nosecone), a cylindrical fuselage and a conventional empennage mounting a single vertical tail fin and applicable horizontal planes. At rest, the aircraft took on a noticeable "nose up" position that required the use of a rolling ladder platform for the crew to gain entry. The undercarriage consisted of a pair of double-tired landing gear legs along the fuselage centerline with a pair of smaller single-tired legs under the inner pair of engine nacelles. With the advent of improved Soviet surface-to-air missile systems (SAM), the B-47 was forced to take more of a low-level bombing role and thus the structure was optimized for the rigors of such flight. Internal ordnance was finalized in the B-47E model which could carry 25,000lb of munitions in the form of 2 x Mk 15 nuclear drop bombs or up to 28 x 500lb conventional drop bombs.

The B-47A was the initial production model serving as evaluation airframes numbering ten examples. The first unit was delivered in December of 1950 and followed closely to the original XB-47 prototypes fitted with J47-GE-11 series turbojet engines of 5,200lbf. At least four were fitted with autopilot and their nav-attack systemsas well as radar. Ejection seats were afforded the two pilots and the bombardier - the former's seats ejecting upwards with the latter's seat ejecting downwards. B-47A models were in service up until 1952 and were followed into service by the improved B-47B models.

B-47Bs served as the first true operational forms of the Stratojet to which the USAF put on order some 87 examples. First flight was on April 26th, 1951 and the dire need by the USAF to field the B-47 ensured a total of 399 B-47Bs were delivered. The first production batch was fitted with J47-GE-11 engines with follow up deliveries being given J47-GE-23 series turbojets of 5,800lbf. Since the B-47 series, up to this point, held an inherently short operational range, an in-flight refueling boom was added to the right side of the nose section to help increase range as well as jettisonable external fuel tanks between the outboard and inner pairing of engines. The addition of this assembly deleted the bombardier's glazed nose cone. The resulting changes produced a heavier end-product than the XB-47 and B-47A before it and several weight-saving measures were enacted - including the removal of the ejection seats.

A specialized reconnaissance version of the B-47 existed - aptly designated as the RB-47 - with extensive onboard Electronic CounterMeasures (ECM) equipment installed. The similarities between the B-47 and the RB-47 were consistent which allowed all RB-47s to be retrofitted to carry bombs if need be. Despite the inherently limited internal carrying capacity of the base aircraft - either for munitions or electronics equipment - the B-47 made up for it in quantity with over 2,000 produced in one form or another - many eventually seeing operation with the Strategic Air Command (SAC). The RB-47B consisted of 24 B-47B airframes modified for the reconnaissance role - these fitting eight internal cameras in the forward bomb bay. Of note was that these airframes were only capable of daylight operations.©MilitaryFactory.com
Advertisements

TB-47B were trainer conversion models of the B-47B production model. At least 66 of B-models were converted as such and saw the loss of their defensive tail armament as well as the inclusion of a fourth position seat for the instructor.

The Stratojet existed in several short-live forms that included the YDB-47B missile launcher platform, the WB-47B weather reconnaissance platform, the KB-47B refueler and the CL-52 from Canadair to be used as a test airframe for the Orenda Iroquois engine to power their (ultimately) cancelled Avro CF-105 Arrow interceptor. Similarly, a B-47E was loaned to the United States Navy for the testing of the GE TF34-2 turbofan engine to be used in the Lockheed S-3 Viking anti-submarine aircraft and designated as the NB-47E. Several specialized ECM conversion models existed and were noted for their "E" designators as in the EB-47E, EB-47E(TT) and ETB-47E. The JB-47E was used to test early fly-by-wire systems while QB-47E were radio-controlled target drones.

Boeing further proposed a four engine variant of the B-47 to be powered by 4 x Allison J35-A-23 turbojet engines of 10,090 thrust each. Engine issues eventually delayed and ultimately cancelled this Stratojet version in December of 1952. The XB-47D was an experimental platform fielding Wright turboprops for the USAF but was never furthered after performance did not improve over that of the original's turbojets.

The markers of B-47C and B-47D were assigned to specialized B-47 variants that were never selected for serial production by the USAF.

The definitive B-47 became the B-47E model. First flight was recorded on January 30th, 1953 fielding J47-GE-25 turbojet engines of 5,970lbf. These were then upgraded to the J47-GE-25A series engines sporting water-methanol injection systems to provide extra thrust during take-off. The original 18 JATO packs were further increased to 33 and could be jettisoned after use. Ejection seats were brought back into the fold. The defensive tail armament was upgraded to a pairing of 20mm cannons. The second B-47E production block differed little when compared to the first while the third block added an Electronic CounterMeasures (ECM) suite and chaff dispenser, the former noted as an under-fuselage bulge. The fourth production block featured a reinforced airframe and landing gear as well as an increased internal fuel capacity and, therefore, longer range. The internal bomb load was increased to an extend as well (25,000lbs) but made smaller to accommodate the smaller technology of newer nuclear ordnance. The B-47E was produced in 1,341 examples with production handled by Boeing, Lockheed and Douglas facilities.

The RB-47H was an ELINT (ELectronic INTelligence) platform and were joined by a further variant known as the ERB-47H. These were noted for their blistered noses and pressurized bomb bays (serving as a crew cabin) and differentiated by the latter's antenna fairing under the nose. RB-47K were utilized in weather reconnaissance roles up until 1963. The EB-47L was used as an airborne communications relay platform (in the advent of all-out nuclear war) beginning in 1963.

By 1965, the B-47 program had all but run its course, now replaced by the Convair B-58 Hustler and the Boeing B-52 Stratofortress series of bombers (both aircraft detailed elsewhere on this site). Despite this somewhat average span for operational service, the B-47 became a major contributor to the United States Air Force in terms of strategic defense and deterrence. Serving as a capable high- or low-level bomber and reconnaissance platform ensured the system a good historical reputation and paved the way for future American bomber designs capitalizing on the successes pioneered in the groundbreaking B-47.©MilitaryFactory.com
Note: The above text is EXCLUSIVE to the site www.MilitaryFactory.com. It is the product of many hours of research and work made possible with the help of contributors, veterans, insiders, and topic specialists. If you happen upon this text anywhere else on the internet or in print, please let us know at MilitaryFactory AT gmail DOT com so that we may take appropriate action against the offender / offending site and continue to protect this original work.
Advertisements

(Showcased performance specifications pertain to the Boeing B-47E-IV Stratojet production variant. Performance specifications showcased above are subject to environmental factors as well as aircraft configuration. Estimates are made when Real Data not available. Compare this aircraft entry against any other in our database or View aircraft by powerplant type)
STANDARD (B-47B):
2 x 12.5mm heavy machine guns in rear remote-controlled powered turret.

OPTIONAL:
Up to 25,000lbs of internal ordnance to include both nuclear and conventional drop bombs.

General Assessment
Firepower
Performance
Survivability
Versatility
Impact
Values are derrived from a variety of categories related to the design, overall function, and historical influence of this aircraft in aviation history.
Overall Rating
The overall rating takes into account over 60 individual factors related to this aircraft entry.
84
Rating is out of a possible 100 points.
Relative Maximum Speed
Hi: 750mph
Lo: 375mph
This entry's maximum listed speed (600mph). 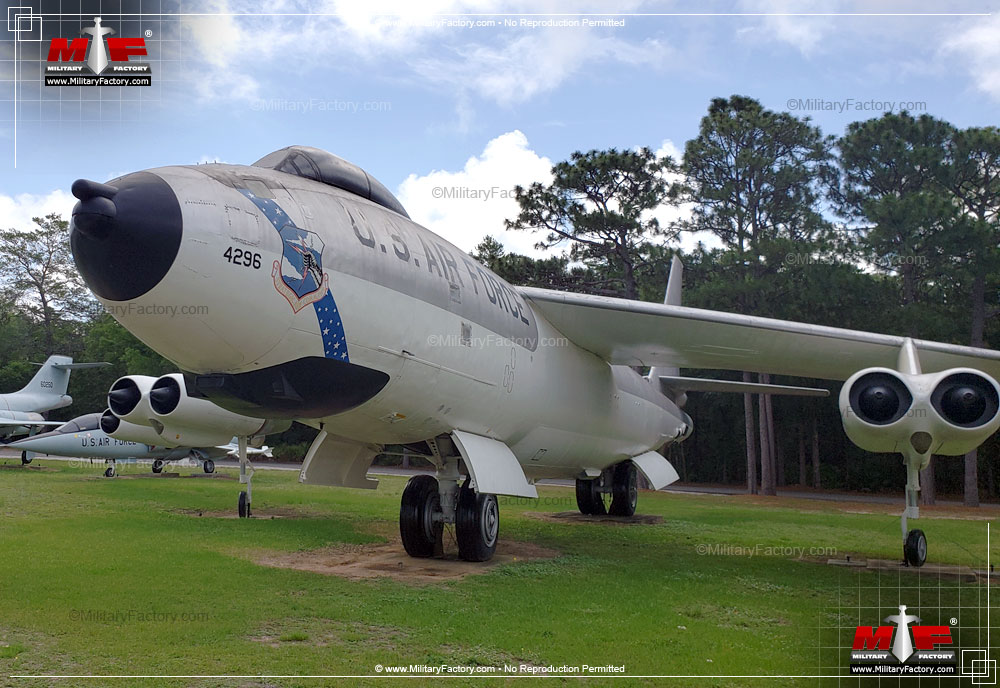 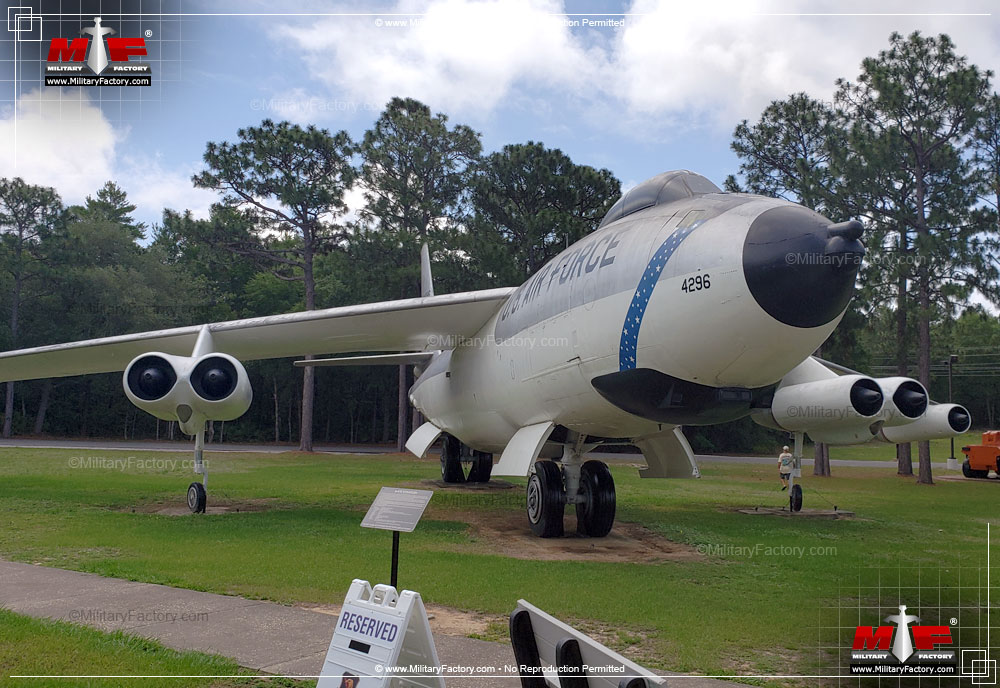 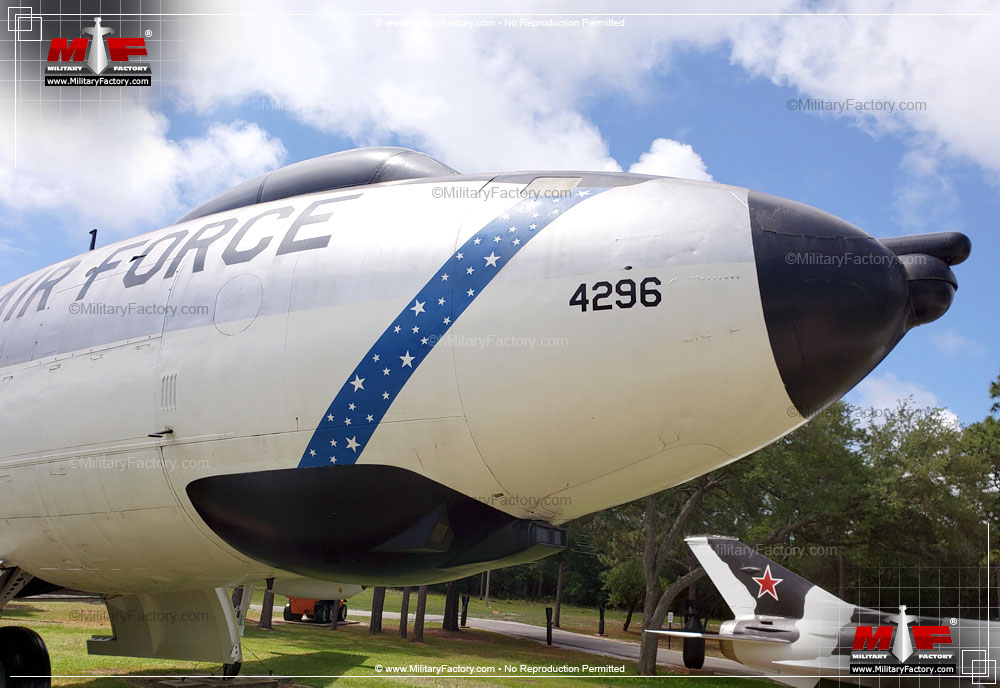 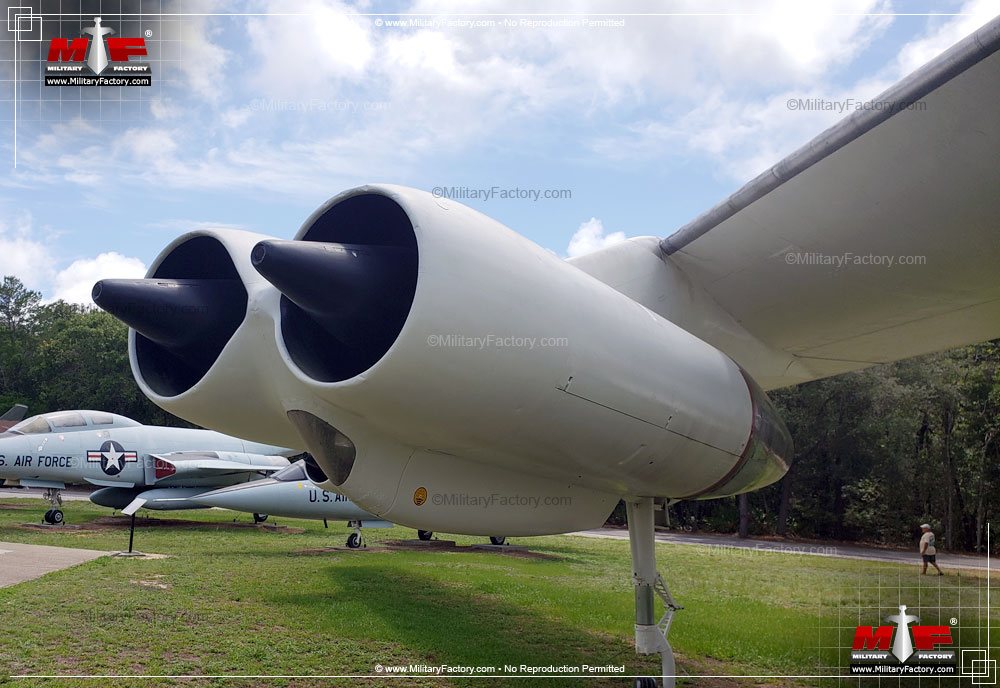 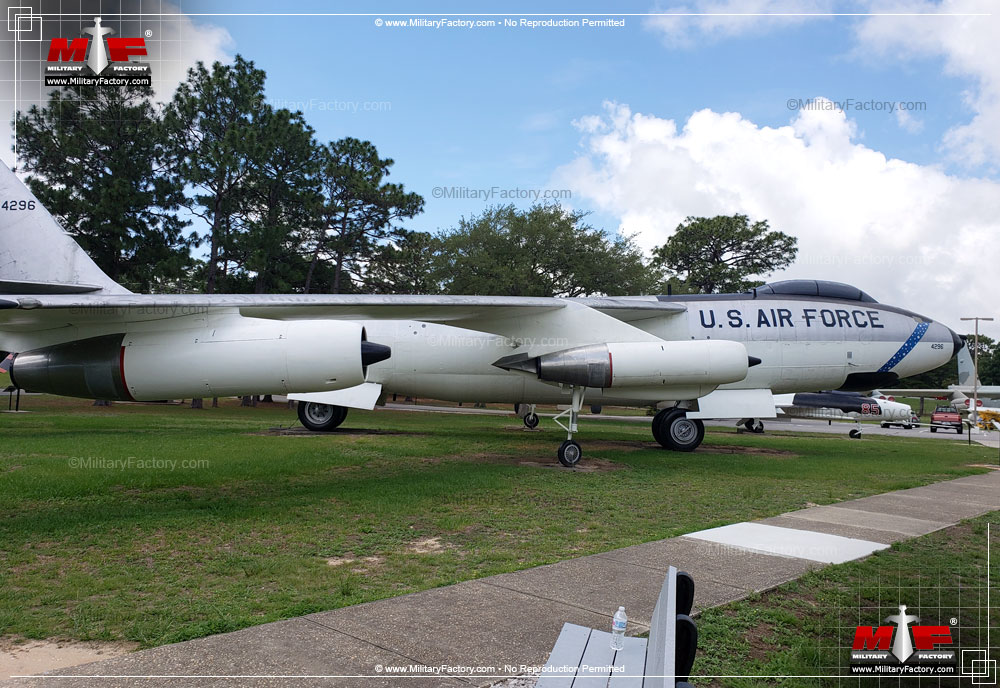 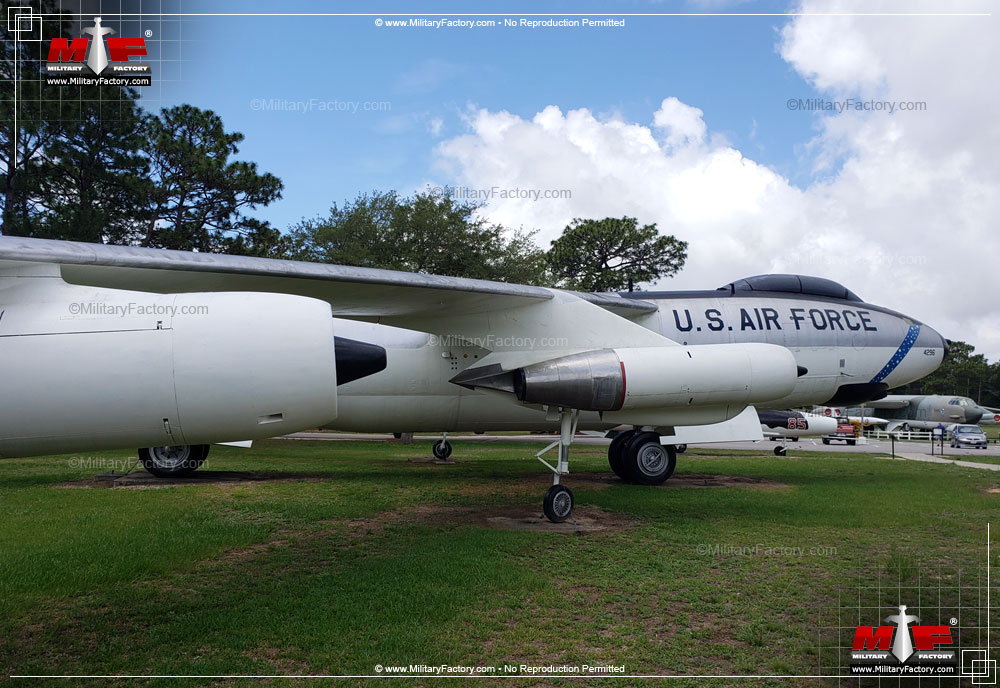 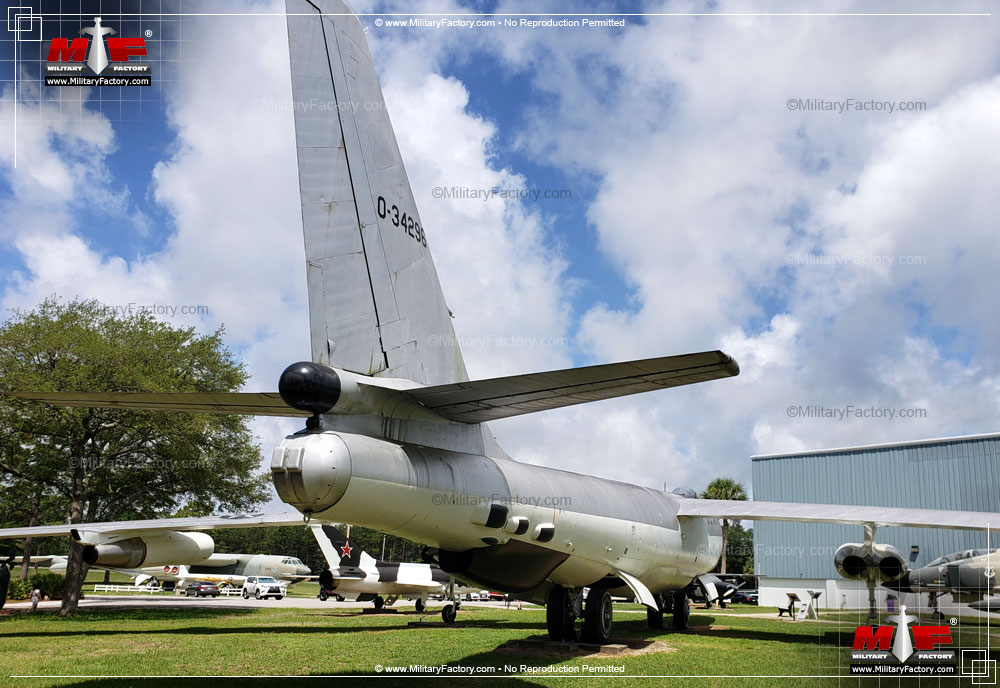 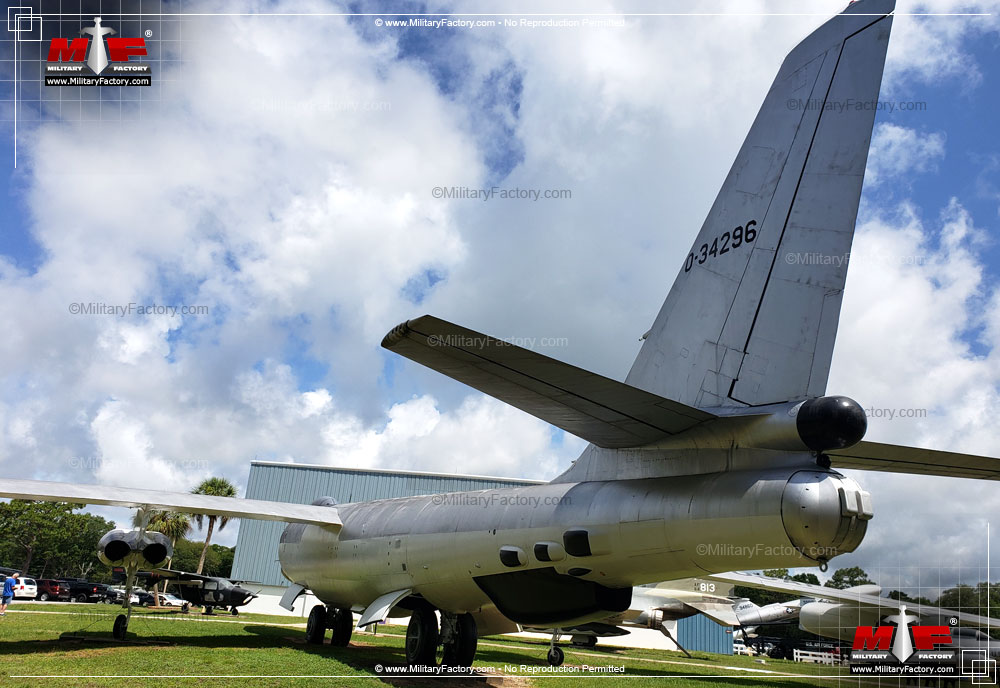 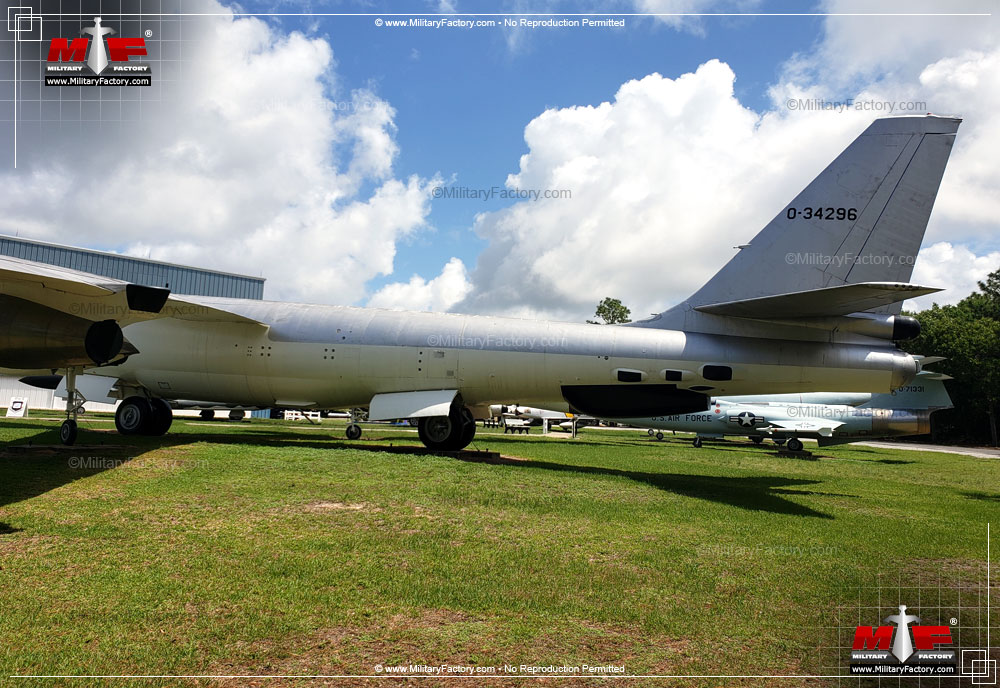 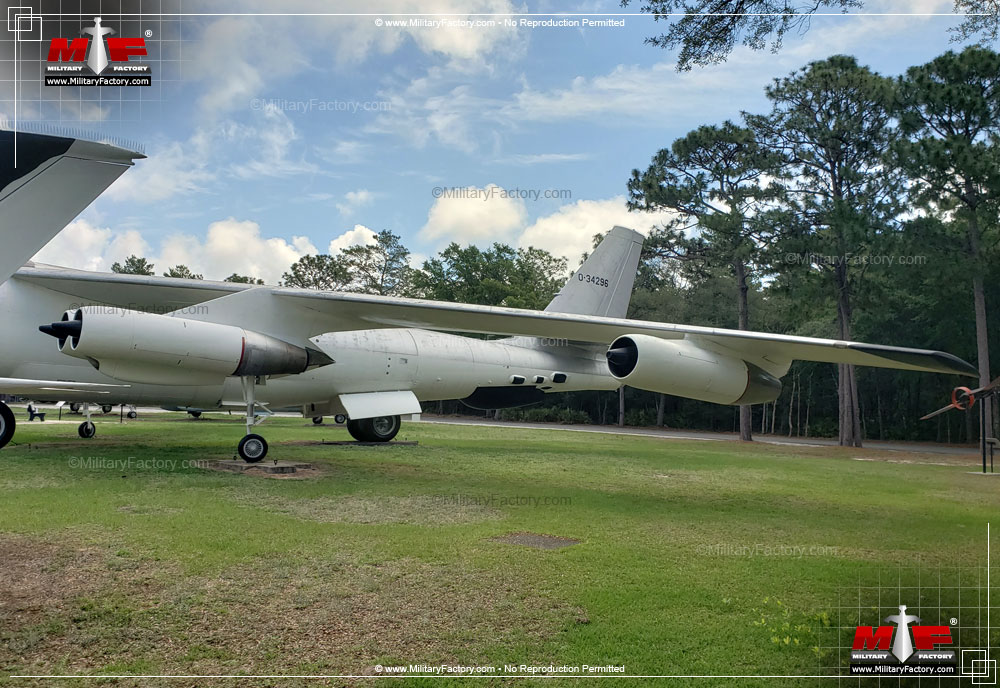 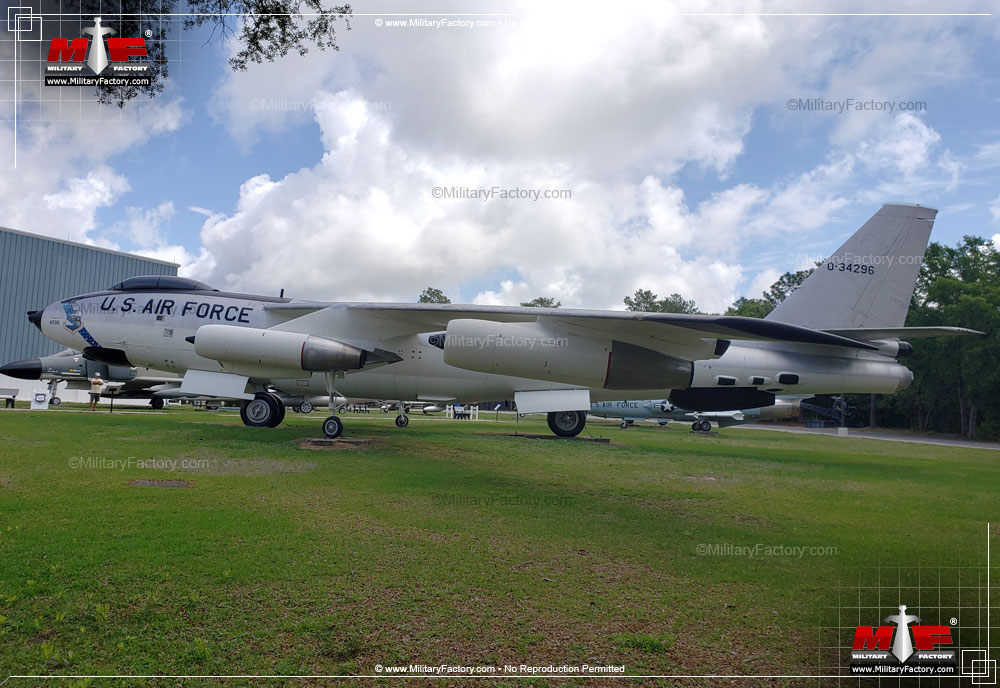 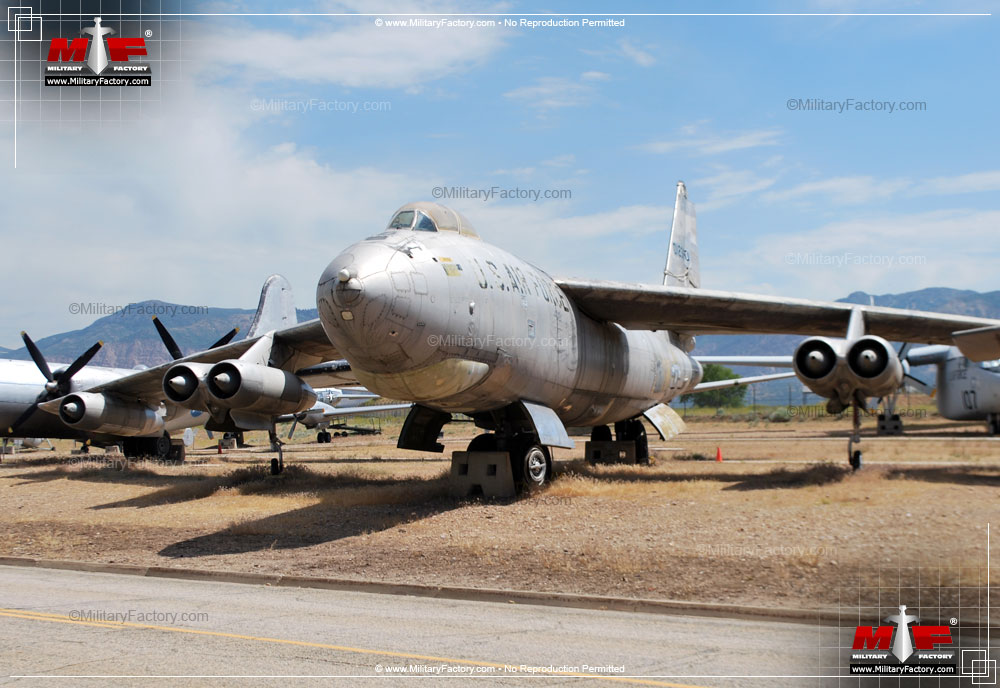 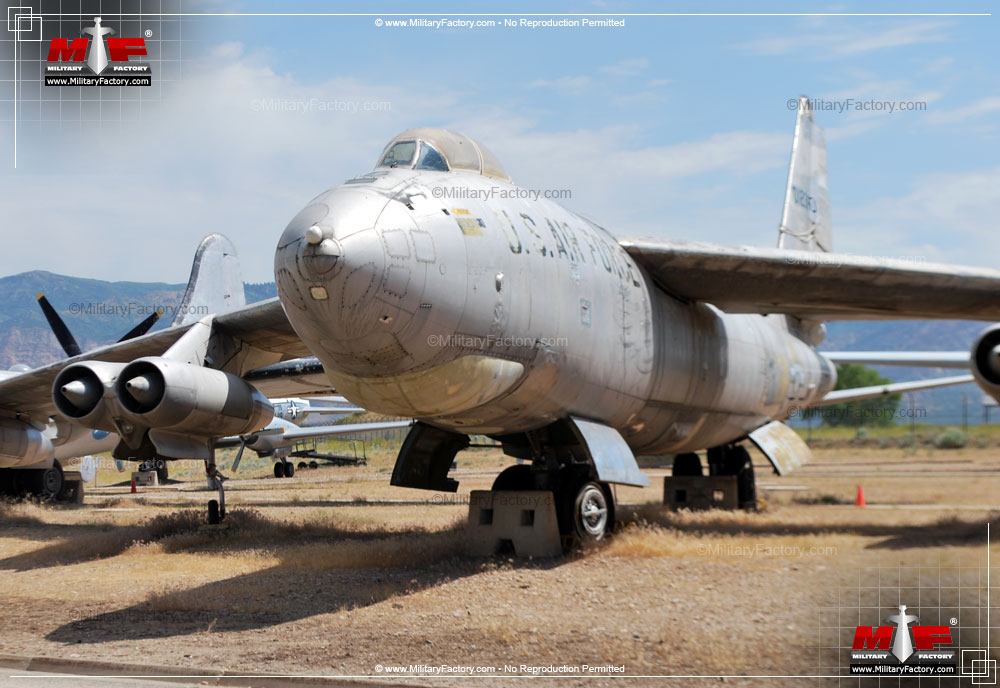 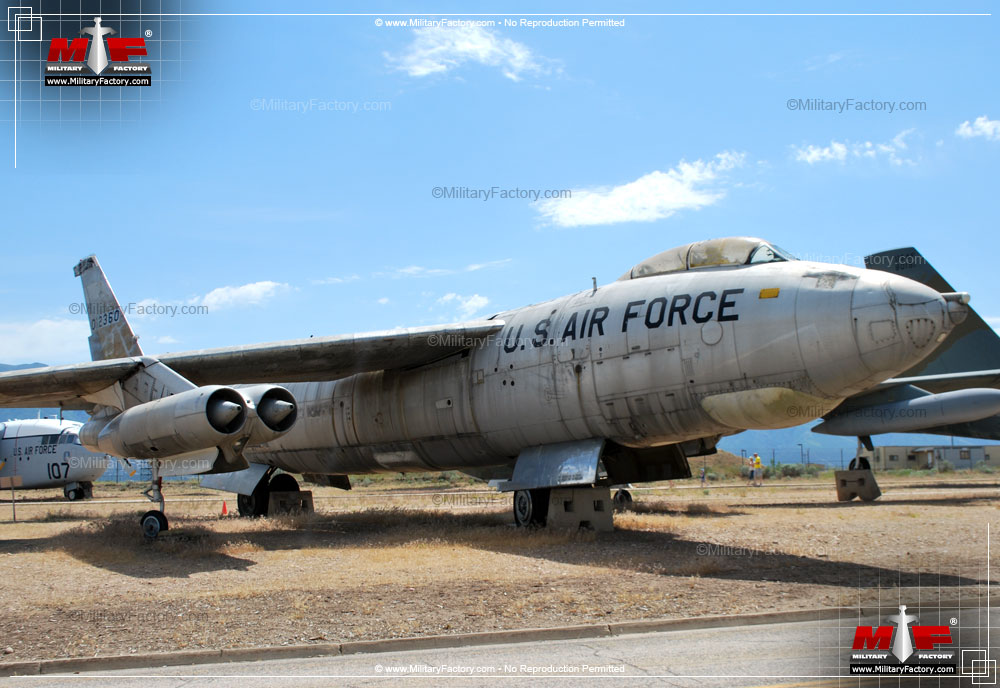 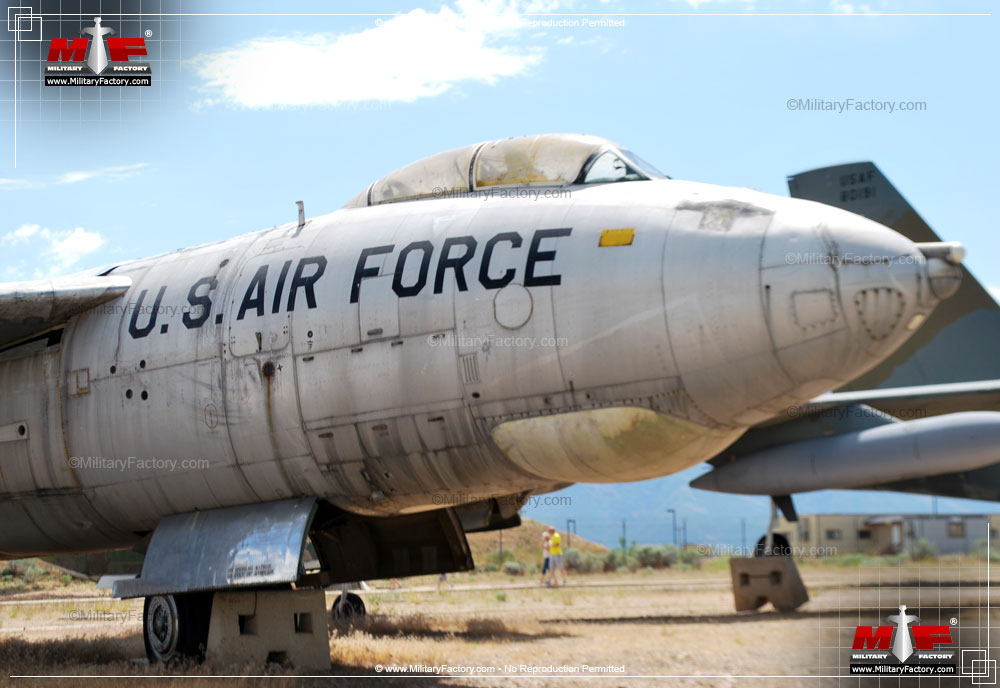