The CONVAIR B-36 Peacemaker turned into a prominent nuclear-capable bomber for the United States Air Force during its time aloft. 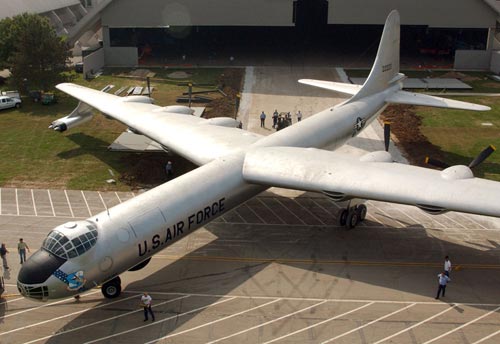 If developed a few years sooner, the massive jet-powered CONVAIR B-36 "Peacemaker" could have very well taken part in the final battles of World War 2 (1939-1945). The initial design was born in a 1941 initiative by the United States Army Air Corps (USAAC) for a large, intercontinental strategic bomber capable of taking off from locations within the United States and able to deliver a considerable bomb payload against targets in Europe - this under the assumption that Britain would soon fall to the Germans and leave no viable American ally in Europe.

As such, work progressed throughout the war years, ultimately yielding a the XB-36 prototype which became the sole prototype completed for the program. This aircraft achieved a first flight on August 8th, 1946 and was powered by no fewer than 6 x Pratt & Whitney R-4360-25 radial piston engines delivering 3,000 horsepower each.

The finalized B-36 took on a rather unique form as Cold War bombers went with its lengthy tubular fuselage, all-silver metal finish, and wide-spanning wings. The flightdeck was situated at the extreme front of the fuselage behind a short nosecone assembly with heavy glazing featured. Towards the empennage the fuselage tapered and the tail unit was capped with a single large vertical tail fin. Low-mounted horizontal planes completed the tail wing structure. The wing mainplanes were swept rearward along their leading edges and relatively straight along their trailing edges. The six engines were arranged in a "pusher" configuration and saw the propeller assemblies facing aft. The complicated wheeled and retractable undercarriage was of considerable size to support the sheer mass of the large aircraft when on the ground. By both size and carrying capacity measures, the B-36 was something of a monster when compared to the classic "heavy" bombers of World War 2.

After the XB-36 prototype was the developmental-minded YB-36 model which incorporated a refined nose section and cockpit. The model became the YB-36A and was given a sturdier undercarriage. This mark then evolved to become the reconnaissance-minded RB-36E detailed later. The main production variant became the B-36A but these were withheld for training purposes and left unarmed. Some twenty-two of the type were completed. The B-36B was the definitive armed production form with 6 x R-4360-51 radial piston engines of 3,500 horsepower each. 73 of the mark were completed. The RB-36B designated some 36 B-36B models outfitted with camera equipment for the photo-reconnaissance role.

The YB-36C was intended as a B-36B offshoot though fitted with 6 x R-4360-51 series radials of 4,300 horsepower each. Nevertheless the model was not advanced into a production form and the B-36C designation was instead used to cover new B-36B model aircraft. The B-36D followed suit but added 4 x General Electric J-47-GE-19 series jets in a pair of underwing pods. 22 were new-build aircraft while 64 were converted from existing B-models. The RB-36D was its reconnaissance-minded form and seventeen were new-builds to this standard while seven conversions of B-models followed. The GRB-36D were ten D-models with provision for carrying the GRF-84F Thunderstreak jet fighter in its bomb bay area for the "parasite fighter" program.©MilitaryFactory.com
Advertisements

The RB-36E was born from the YB-36A developmental model and an additional 21 B-36A production models for the reconnaissance role. These then ended their days as reconnaissance platforms upgraded to the D-model standard. The B-36F followed the D-models as well but instead were completed with 6 x R-4360-53 radial piston engines of 3,800 horsepower as well as 4 x J-47-GE-19 series jets. 34 of the mark were delivered. The reconnaissance model became 24 of the RB-36F series.

The B-36H introduced a new cockpit and mission equipment but more or less followed the B-36F model line. 83 of this mark were completed. The NB-36H was a one-off H-model product used in nuclear reactor propulsion trials in an attempt to produce a heavy bomber powered by nuclear means. The RB-36H was the reconnaissance H-model form.

The B-36J was introduced as a high-altitude strategic bomber variant and brought along increased fuel stores for improved range, a reinforced undercarriage, and tail-gun-only defensive armament. 33 of this type were completed.

The B-36J featured a length of 49.4 meters with a wingspan of 70 meters and a height of 14.25 meters. Its empty weight was listed at 166,165lb with a Maximum Take-Off Weight (MTOW) of 410,000lb. Its typical crew complement numbered thirteen specialists. Power was served through 6 x Pratt & Whitney R-4360-53 "Wasp Major" radial piston engines of 3,800 horsepower with assistance from 4 x General Electric J47 series turbojets delivering an additional 5,200lbf of thrust. Maximum speed reached 418 miles per hour with cruising speeds of 230 mph. Combat radius lay in the 3,985 mile range with a ferry range out to 10,000 miles. The B-36J's service ceiling was 43,600 feet and rate-of-climb measured at 1,995 feet per minute.

Beyond its 72,000lb internal bombload, the J-models carried 2 x 20mm M24A1 cannons in a remote-operated tail turret to protect against closing threats from the rear.

The B-36 went on to stock the inventory of the United States Air Force solely and was never exported nor used by any other U.S. service branch. It formed a major component of Strategic Air Command (SAC) for years after its introduction while also fulfilling the general heavy bomber requirement of several bomber wings and the reconnaissance role for a few other groups. 384 total aircraft were ultimately completed from 1946 to 1954.

The line was eventually given up for good come February of 1959 as the B-36 was now formally succeeded by the Boeing B-47 "Stratojet" series. Only a few complete B-36 aircraft exist today as museum showpieces with many having been scrapped decades ago.©MilitaryFactory.com
Note: The above text is EXCLUSIVE to the site www.MilitaryFactory.com. It is the product of many hours of research and work made possible with the help of contributors, veterans, insiders, and topic specialists. If you happen upon this text anywhere else on the internet or in print, please let us know at MilitaryFactory AT gmail DOT com so that we may take appropriate action against the offender / offending site and continue to protect this original work.
Advertisements

Status
RETIRED
Not in Service.
Crew
15

OPTIONAL:
Up to 86,000 lb of internally-held conventional or nuclear drop bombs. 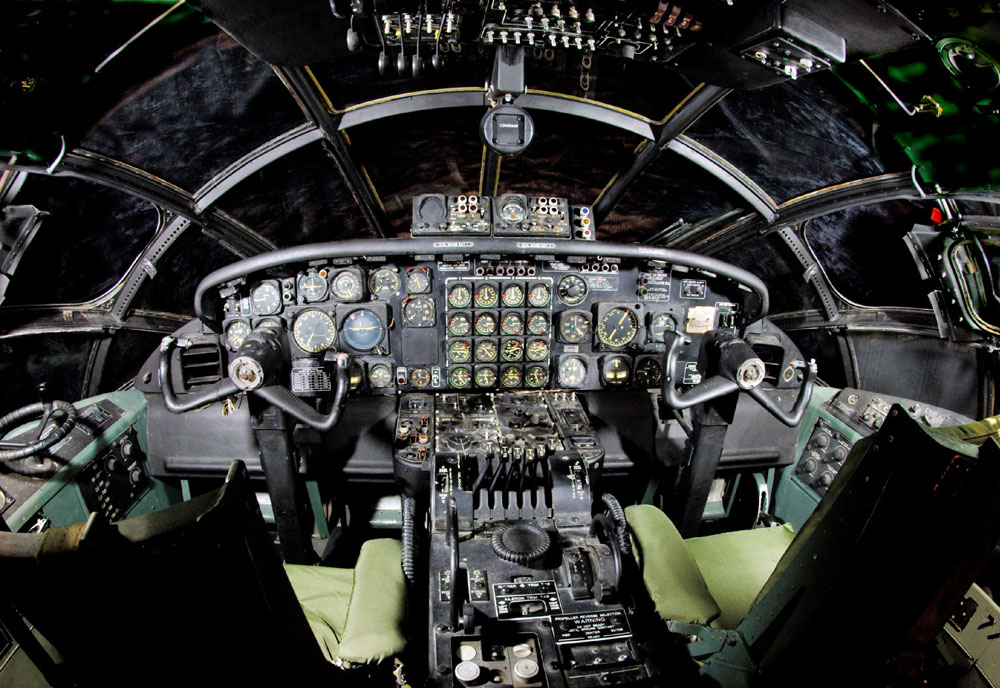 General Assessment
Firepower
Performance
Survivability
Versatility
Impact
Values are derrived from a variety of categories related to the design, overall function, and historical influence of this aircraft in aviation history.
Overall Rating
The overall rating takes into account over 60 individual factors related to this aircraft entry.
76
Rating is out of a possible 100 points.
Relative Maximum Speed
Hi: 500mph
Lo: 250mph
This entry's maximum listed speed (439mph). 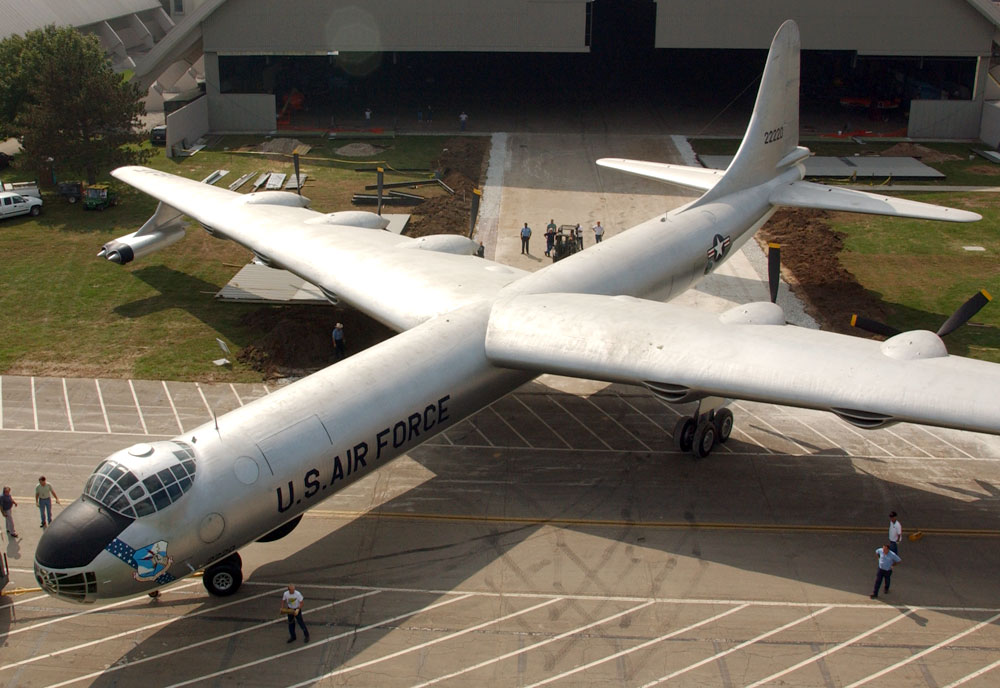 Image from the National Museum of the United States Air Force, Dayton, Ohio.
2 / 15 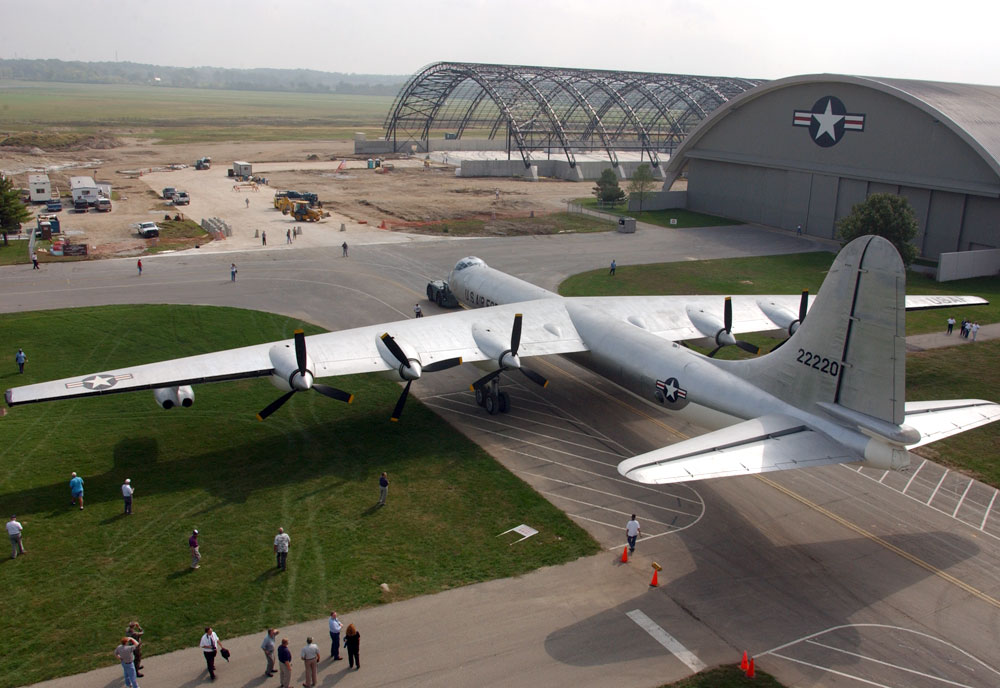 Image from the National Museum of the United States Air Force, Dayton, Ohio.
3 / 15 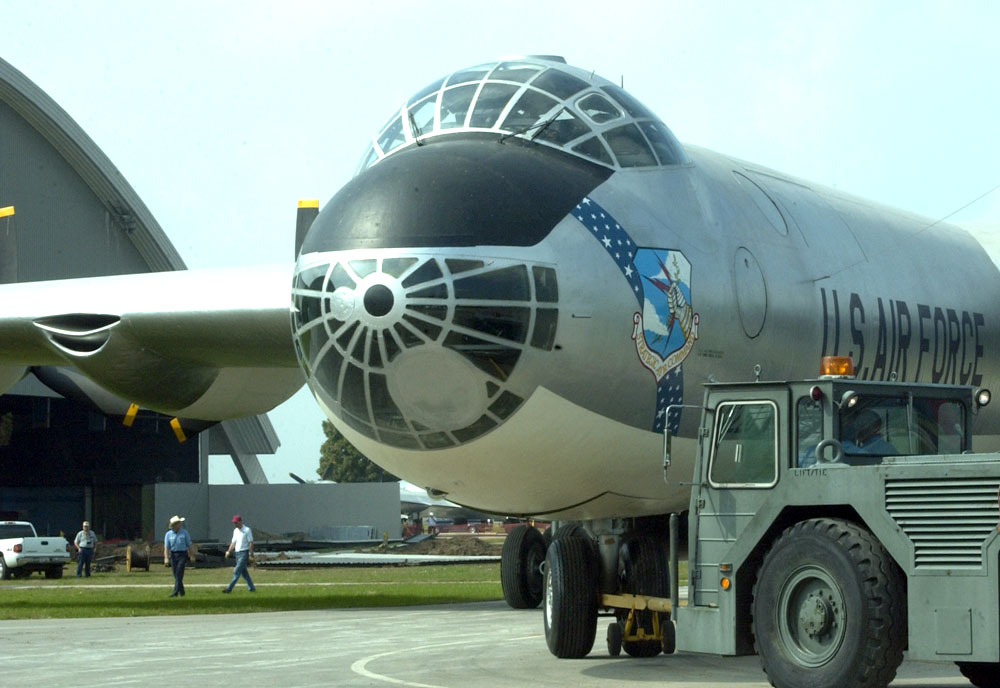 Image from the National Museum of the United States Air Force, Dayton, Ohio.
4 / 15 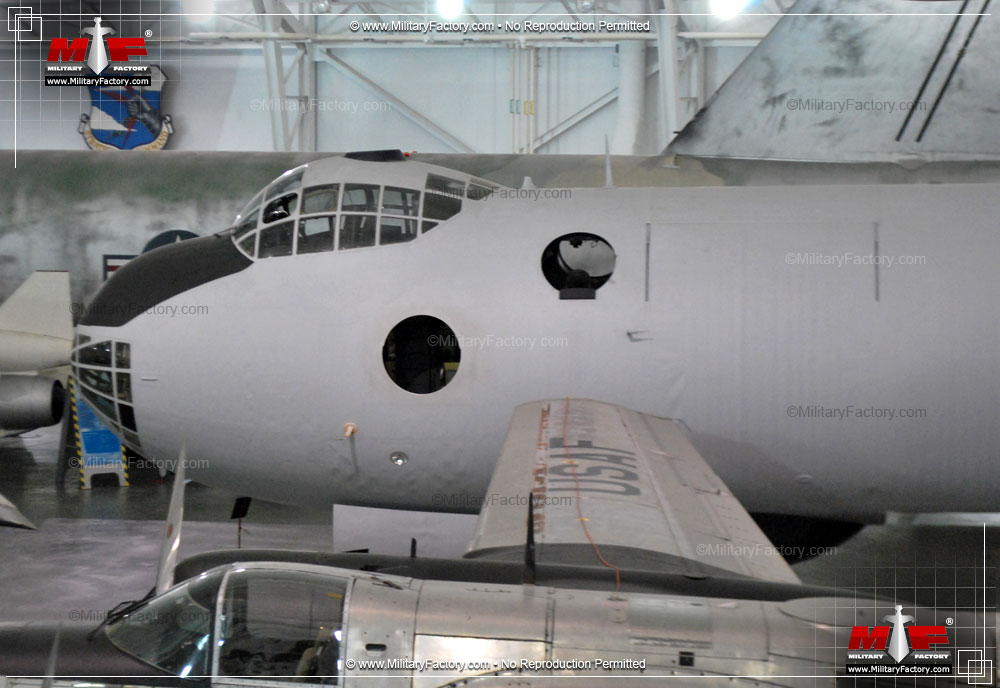 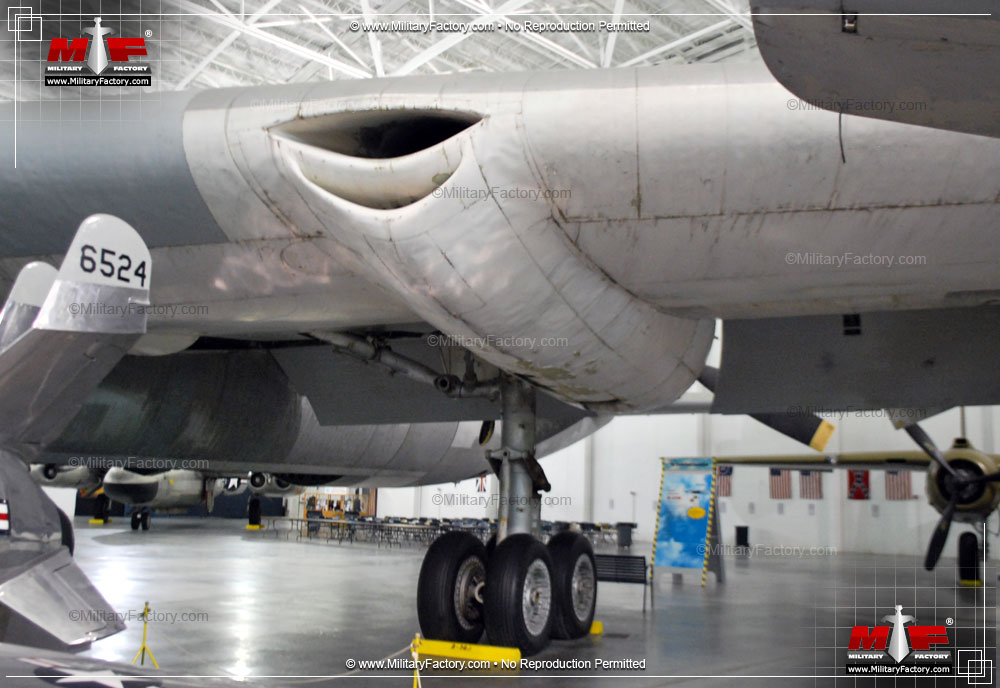 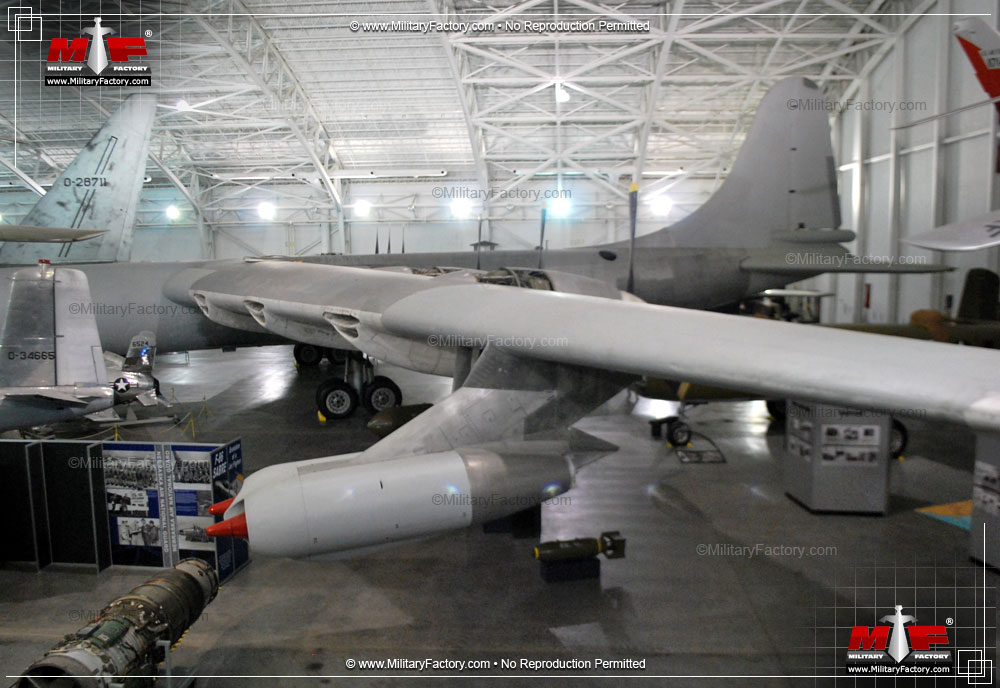 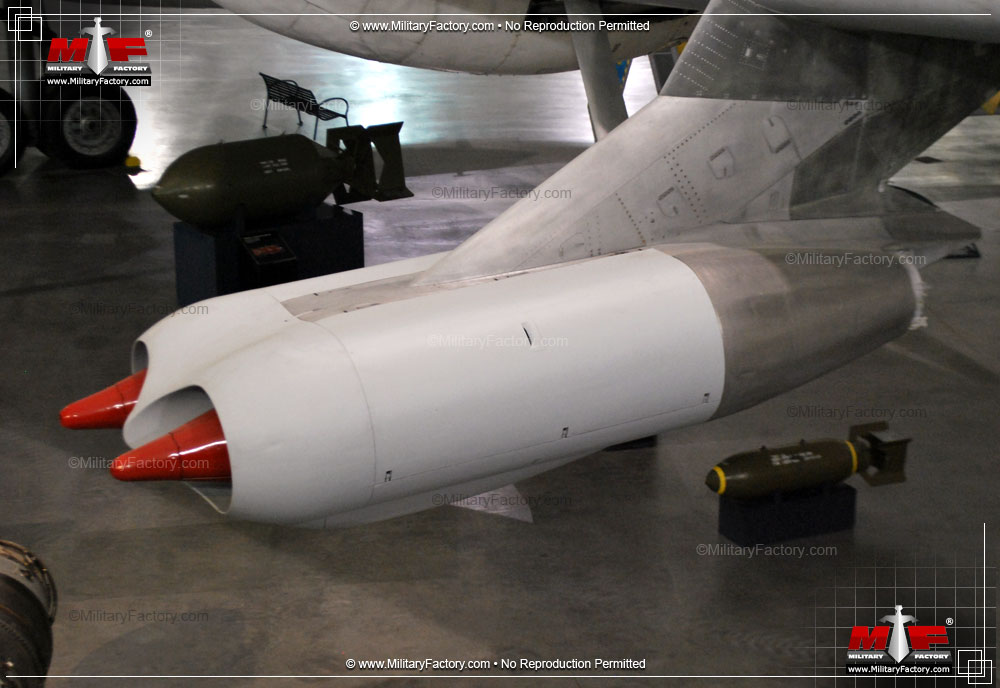 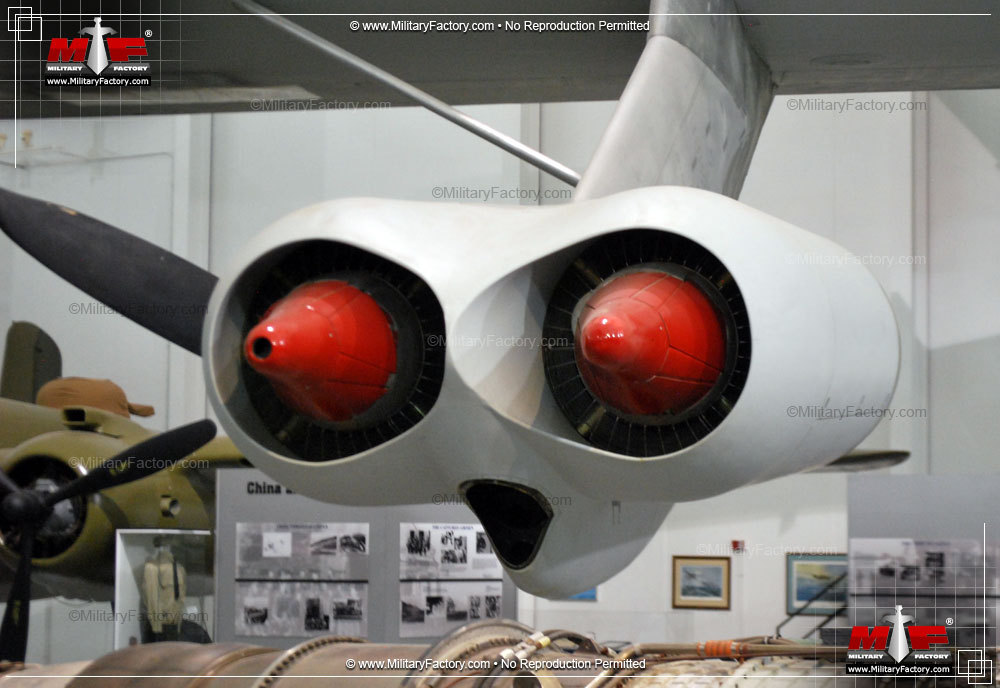 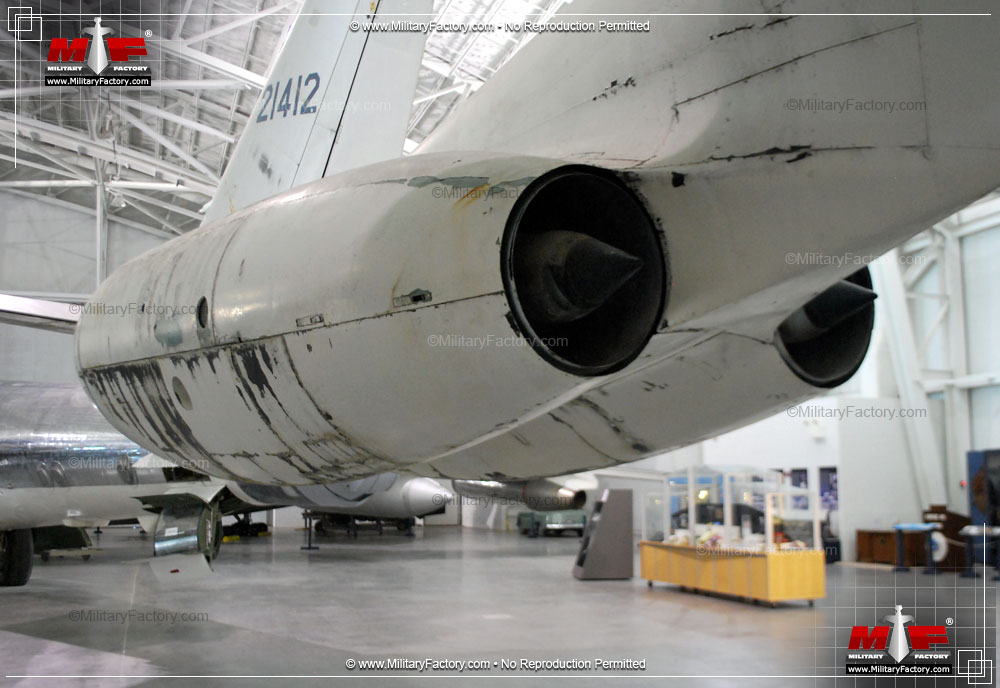 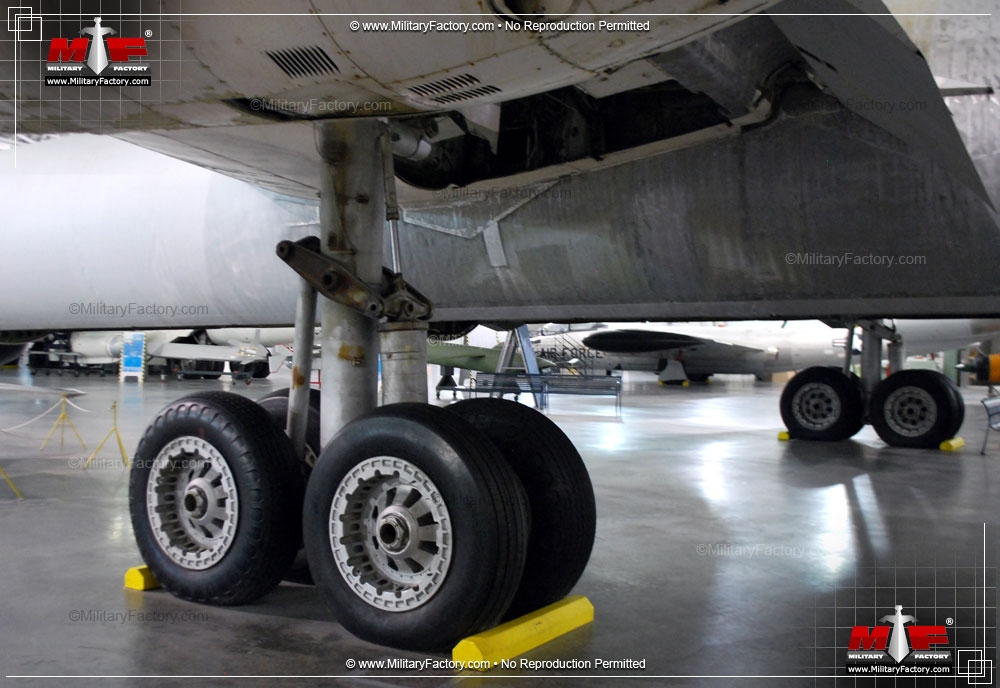 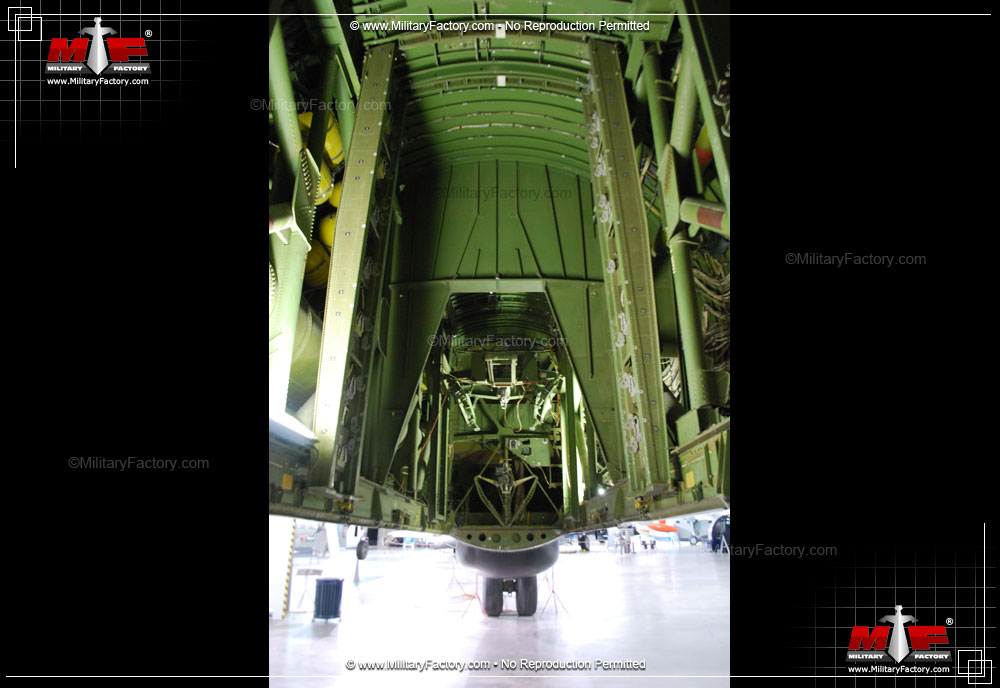 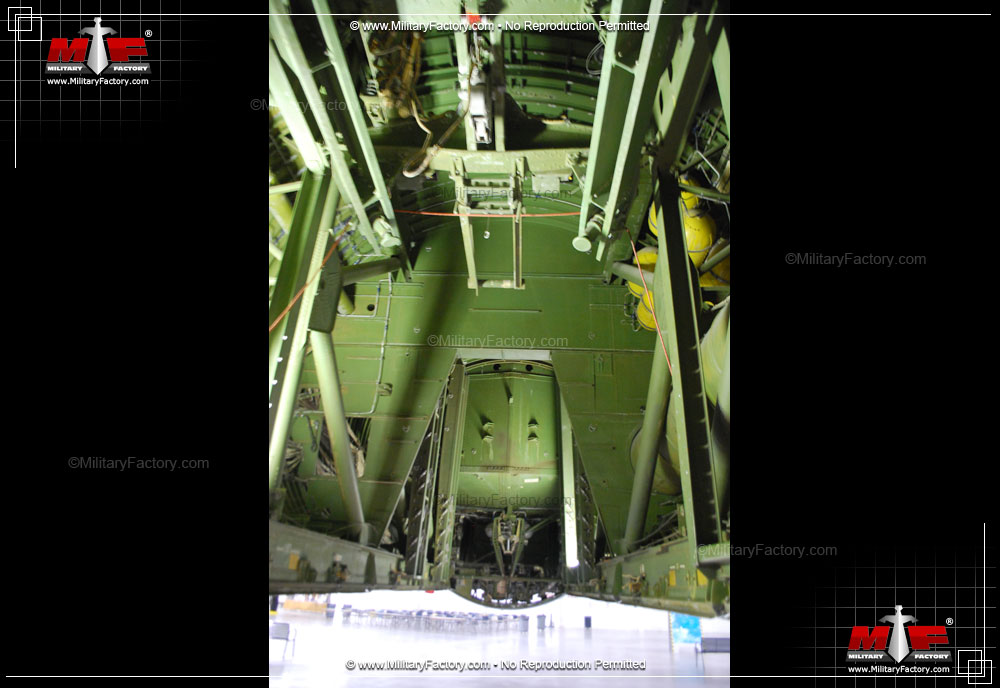 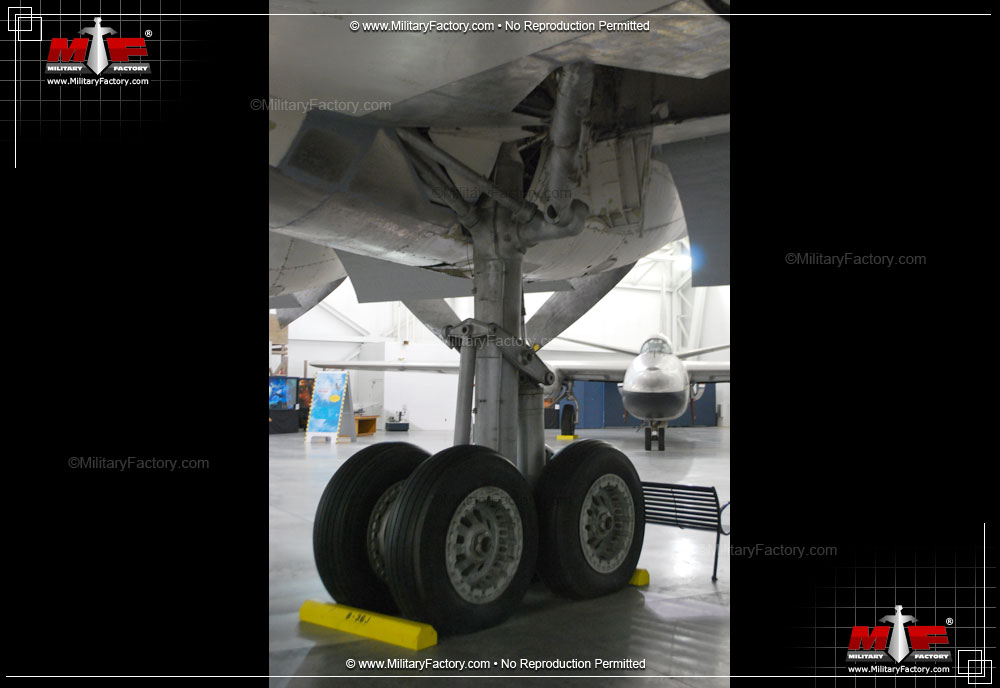 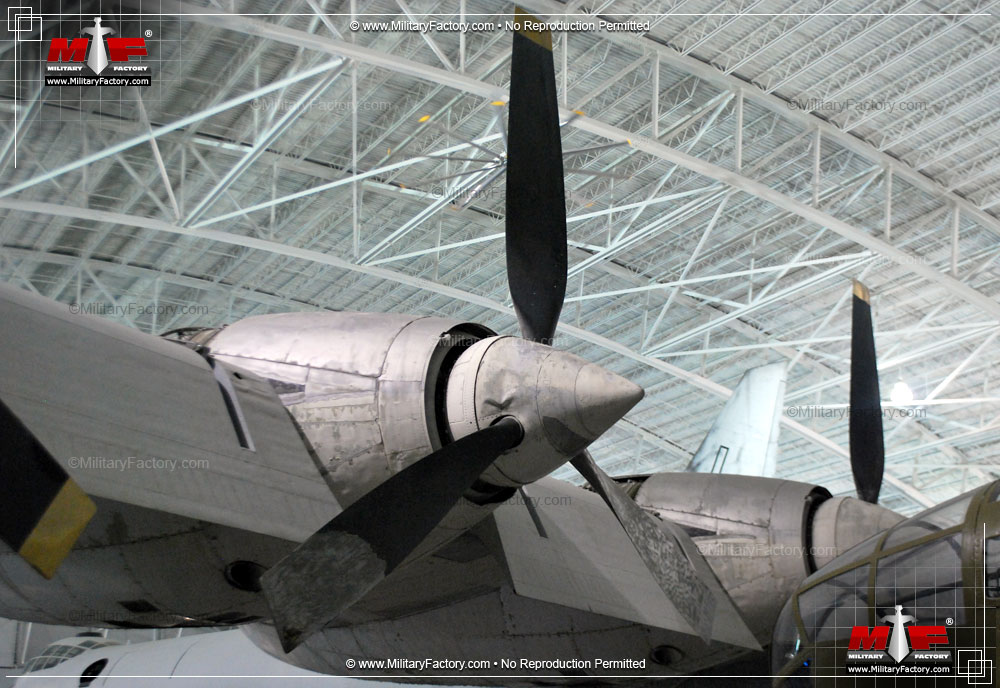 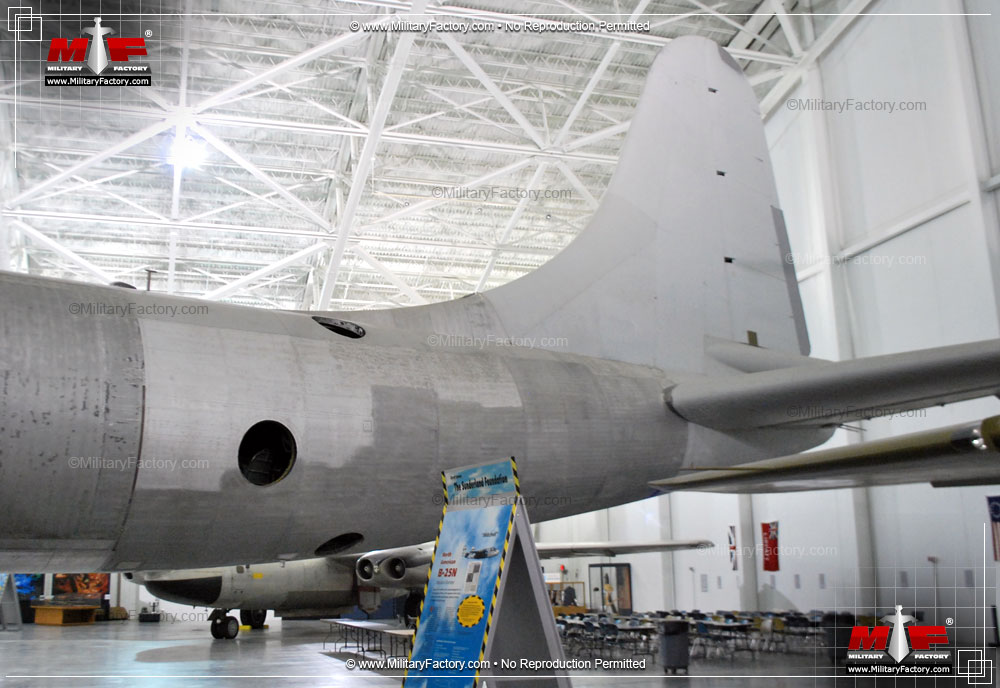