The Handley Page Halifax bomber shined in both night-bombing and airborne support roles during World War 2.

Authored By: Staff Writer | Last Edited: 10/16/2018 | Content ©www.MilitaryFactory.com | The following text is exclusive to this site. 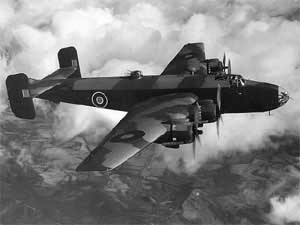 While the Lancaster Heavy Bomber will always be more identifiable in terms of the British night bombing campaigns of World War Two, the Handley Page Halifax series of bombers should be remembered as being just as equally important in that role as well as others.

The Halifax began as the prototype order H.P.56 and originally featured a setup of just two Vulture piston engines. With lingering performance issues readily apparent, the Handley Page company designed another prototype featuring four Rolls-Royce powerplants with the new design designated as the H.P.57. Two H.P.57 prototypes were orders and put through the paces of real flight-testing.

In 1940, the first official production version of the Halifax entered service designated as the Halifax B.Mk I of which 84 total aircraft of this type were produced. The B.Mk I featured 4 x Merlin X's (or "tens") that could generate 1,280 horsepower each. This initial batch of 84 were split into three series in production known as the Series I, Series II and Series III - each featuring minor modifications. The Series II featured an increased maximum take-off weight while the Series III was engineering with greater fuel capacity.

The Halifax B.Mk II introduced the identifiable two-gun dorsal powered turret to compliment the four-gun turret assembly in the tail. Further variations were introduced with a dizzying array of powerplant setups and revised landing gear systems.

The Halifax saw action in other roles during and after the war as well. The transport variants were nothing more than based on original models but placed into the transport role (sans weaponry). Maritime and airborne support models followed this suit as well. Post-war models included the "Halton" civilian transport (these used in the Berlin Airlift operation of post-World War 2) and the C.Mk 8 and A.Mk 9 variants.

In total, production of the Halifax series of aircraft was reported to be 6,177. The bombers were credited with dropping 227,610 tons of bombs through more than 75,530 sorties. In the end, the Halifax bomber proved to be an efficient heavy night bomber capable of fulfilling the other not-so-glorious roles of wartime.
Advertisements

Status
RETIRED
Not in Service.
Crew
7

General Assessment
Firepower
Performance
Survivability
Versatility
Impact
Values are derrived from a variety of categories related to the design, overall function, and historical influence of this aircraft in aviation history.
Overall Rating
The overall rating takes into account over 60 individual factors related to this aircraft entry.
70
Rating is out of a possible 100 points.
Relative Maximum Speed
Hi: 400mph
Lo: 200mph
This entry's maximum listed speed (312mph). 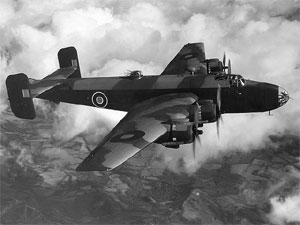