The Boeing F-15EX is being used to extend the service lives of F-15 Eagle air superiority fighters for the USAF - some 144 are planned.

Authored By: Staff Writer | Last Edited: 03/16/2022 | Content ©www.MilitaryFactory.com | The following text is exclusive to this site. 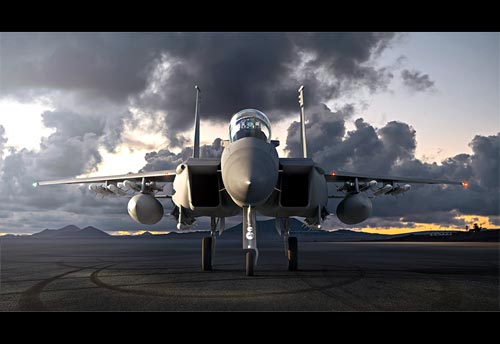 The modern United States Air Force (USAF) finds itself in need of fulfilling a 144-strong fighter gap and the advanced Boeing "F-15EX" has been selected to fill the requirement. This gap emerged after the early termination of Lockheed F-22 "Raptor" 5th Generation Fighters and emerging delays within the Lockheed F-35 "Lightning II" Strike Fighter program, resulting in a need for an all-modern combat aircraft to be had at a manageable cost. Since the F-15 remains in widespread service with the USAF, an evolved form of this same platform was selected as a bridging solution.

The single-seat, twin-engine fighter is a mainstay in the USAF inventory (along with the lightweight Lockheed F-16 "Fighting Falcon") with a long and storied history and unparalleled combat record to boot. The EX-model is a further evolution of the line that began in the 1970s with the original production A-models. In time, the line was expanded to include twin-seat trainer B-models followed by improved F-15C (single-seat) and D-model (twin-seat) aircraft. Japan operates the type as the F-15J and its trainer counterpart as the F-15DJ. The F-15E "Strike Eagle", as its name would suggest, was developed (from the two-seat form) with a focus on precision ground attack.

The F-15EX is being marketed by Boeing as an economical, capable aircraft-hunting platform complete with support for new-generation hypersonic weapons. The product is, itself, an evolution of the earlier F-15X (detailed elsewhere on this site) in which an advanced single-seat version of the twin-seat F-15QA (36 units currently destined for the Qatari Air Force) was developed as a successor to their F-15C and F-15D models in service.

The EX-model is set to feature next-generation systems, components, and onboard technologies to meet current and near-future battlefield threats around the world. Since it is based on the proven framework of the existing F-15, the aircraft will see an expedited development phase in which first-forms will be delivered to the USAF as soon as 2021 for formal evaluation. The EX-model will bring about all of the inherent benefits of the agile, versatile, and supersonic Eagle fighter with all-new capabilities added that will further broaden the battlefield reach of this fine fighter.

Externally, the new aircraft retains the same form-and-function of its predecessors including its single-seat cockpit set aft of a radar-housing nosecone assembly, side-mounted intakes aspirating the side-by-side engine pairing, shoulder-mounted mainplanes, and twin vertical tail fins. A tricycle undercarriage (retractable) will continue to be featured for ground-running operations. up to 80% of the original F-15 will be retained and up to 90% of the same support equipment will be reusable in the new design - driving procurement and maintenance costs down considerably.

The cockpit is set to feature large color Multi-Function Displays (MFDs) with touchscreen capability and these will be a critical part of the aircraft, providing pertinent mission information to the pilot for enhanced situational awareness. Additionally, survivability will be enhanced by way of an integrated Electronic Warfare (EW) suite to better protect against active search, tracking, and engaging radar / missile systems. Automation of onboard functions will also figure into reducing pilot workload and reduce reaction times against threats. Future growth of internal systems is also being built into the F-15EX's design, allowing integration of on-the-horizon components still-to-come.

In terms of offensive capabilities, the F-15EX will be delivered from the outset with support for all in-service, as well as some future, USAF ordnance including Air-to-Air Missiles (AAMs), jettisonable fuel tanks for extended operational ranges, and special-mission pods - this across underwing, underfuselage, and ventral line hardpoints - up to twenty-two AAMs are expected to be supported under full loads by this aircraft.

July 2020 - The USAF has procured eight examples of the F-15EX fighter. First deliveries are planned for middle-late 2021 with the remainder following in 2023.

August 2020 - The Oregon Air National Guard (ANG) will become the first recipient of the new F-15EX model. The first operational unit is expected in 2023 and the new units will succeed an aging fleet of Eagle C- and D-models.

September 2020 - General Electric has begun deliveries of its F110-129 turbofan engines intended for the F-15EX program.

February 2021 - Boeing has flown the first iteration of its F-15EX platform. The successful flight, spanning some 90 minutes, took place from its St. Louis location on February 2nd, 2021.

March 2021 - The USAF has taken delivery of its first F-15EX platform.

April 2021 - A second test example F-15EX has been delivered to the USAF at Elgin AFB.

August 2021 - Boeing has revealed its F-15QA entry destined for Qatar; ferry flights are expected to take place before the end of the year.

October 2021 - GE Aviation has been named as the official supplier of F-15EX fleet engines by the USAF.

February 2022 - The USAF has successfully test-fired a missile from the F-15EX.

March 2022 - U.S. Central Command has revealed that it plans to supply Egypt with F-15EX multirole fighters.

OPTIONAL:
Support for up to 22 x Air-to-Air Missiles (AAMs) most likely a mix of AIM-9 "Sidewinder" short-ranged AAMs and the AIM-120 AMRAAM medium-ranged AAMs as well as jettisonable fuel tanks and special-mission pods.

(Not all ordnance types may be represented in the showcase above)
Hardpoint Mountings: 9 (some mountings inline / shared)
Mounting Points

General Assessment
Firepower
Performance
Survivability
Versatility
Impact
Values are derrived from a variety of categories related to the design, overall function, and historical influence of this aircraft in aviation history.
Overall Rating
The overall rating takes into account over 60 individual factors related to this aircraft entry.
90
Rating is out of a possible 100 points.
Relative Maximum Speed
Hi: 1900mph
Lo: 950mph
This entry's maximum listed speed (1,864mph). 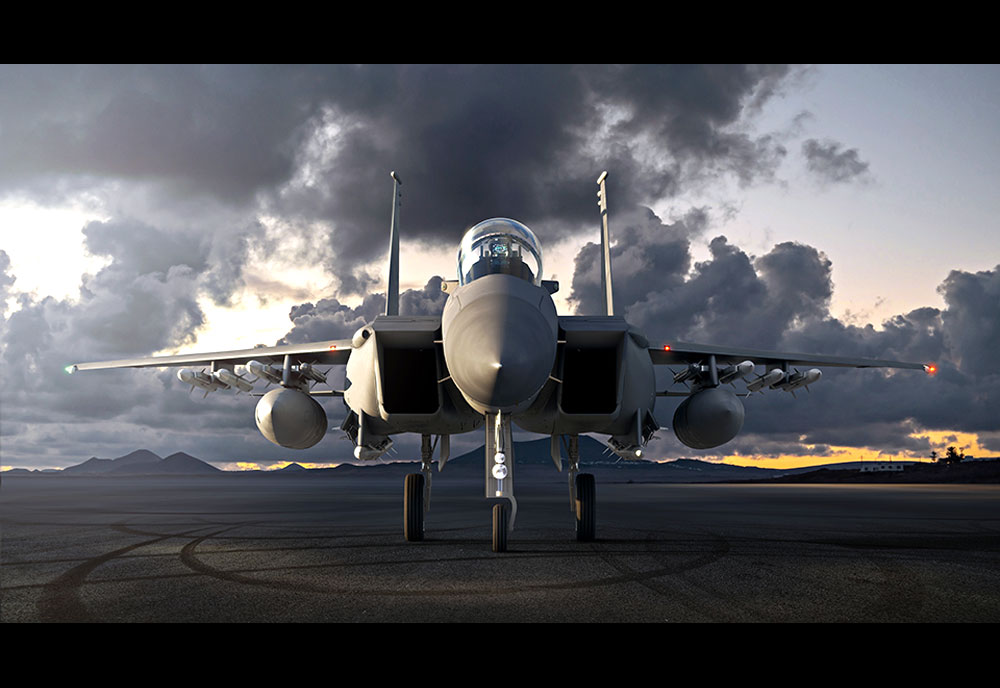 Aviation developments of similar form and function, or related to, the Boeing F-15EX Eagle II...