The Bronco Ii is a rebranded and slightly modified version of the earlier South African Paramount AHRLAC Mwari light-attack platform.

Authored By: Staff Writer | Last Edited: 09/22/2021 | Content ©www.MilitaryFactory.com | The following text is exclusive to this site. 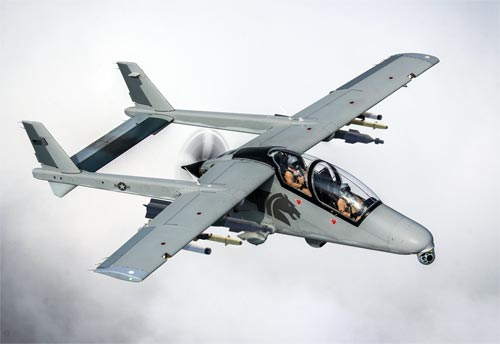 The Bronco Combat Systems (BCS) "Bronco II" is a rebranded version of the original Paramount Group AHRLAC (Mwari) Close-Air Support (CAS) / light attack platform (detailed elsewhere on this site) of South African origin. The new Bronco II emerged through a U.S-focused rebranding in 2018 set against a USAF light attack requirement and is currently (2020) being marketed for consideration to fulfill the United State Special Operations COMmand (USSOCOM) "Armed Overwatch" light-strike requirement. Leidos is leading the team with Paramount Group (U.S.) and Vertex Aerospace as sub-contractors. The flying portion of the competition is set to begin November 2020.

The South African Mwari aircraft was born in 2009 but has since failed to net any global interest.

The Bronco II name is an homage to the original North American Rockwell (now Boeing) "Bronco" twin-engine / twin-boom light attack / observation aircraft which first-flew in July of 1965 and saw considerable service during the American involvement in the Vietnam War (1955-1975). 360 units were built in all with the Philippine Air Force still flying the type despite production having ended in 1986.

The BCS Bronco II was originally known by the name of "Advanced High-Performance Reconnaissance Light Aircraft".

The Bronco II continues to showcase the form-and-function of the original Mwari design. It seats its crew of two in tandem under an unobstructed clear view canopy. The rear crewmember (co-pilot) is elevated in the arrangement with a view over the front seat. The short nose assembly also aids the forward crewmember (pilot) by providing exception vision of the terrain ahead. At the "chin" position of the aircraft is an optional sensor fit while another trainable unit, also optional, is seated under the fuselage further aft. The wing mainplanes are straight in their general shape and mounted at shoulder-height along the fuselage sides, providing excellent short-field performance and aiding "low-and-slow" flying envelopes. The mainplanes also exhibit slight forward sweeping.

The aircraft maintains compact dimensions that allow it to be broken down and shipped by Lockheed C-130 "Hercules" turboprop-powered tactical transports. A single example can fit in its hold. Up to two aircraft can be transported through the larger Boeing C-17 "Globemaster III" series jet-powered strategic transports.

The engine is buried within the aft section of the fuselage nacelle and drives a multi-bladed propeller unit at the rear in a "pusher" arrangement. This leaves the forward section (and its accompanying views) completely unobstructed by spinning propeller blades.

Each main wing member supports a tail boom which extends to the rear. These appendages are joined by a shared horizontal plane and are capped by vertical rudder planes.

For ground-running, a conventional wheeled tricycle arrangement is used. The arrangement is partially retractable into the design with some of the wheel surfaces exposed during flight.

Other options include mission-support equipment such as targeting pods. A modular bay under the aircraft allows for "quick-changing" of the mission fit allowing the aircraft to undertake dedicated reconnaissance or attack sorties as needed.

May 2018 - Aviall has joined the Bronco Combat Systems team.

September 2021 - The Bronco II has been eliminated as a contender in the USAF's Armed Overwatch program. 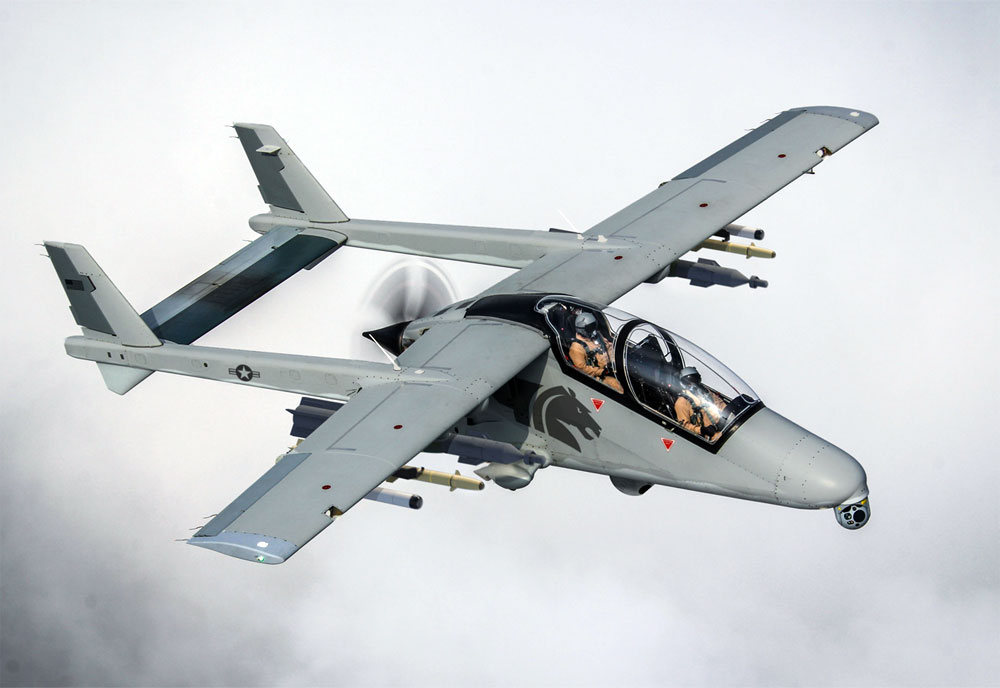 Aviation developments of similar form and function, or related to, the Bronco Combat Systems Bronco II...