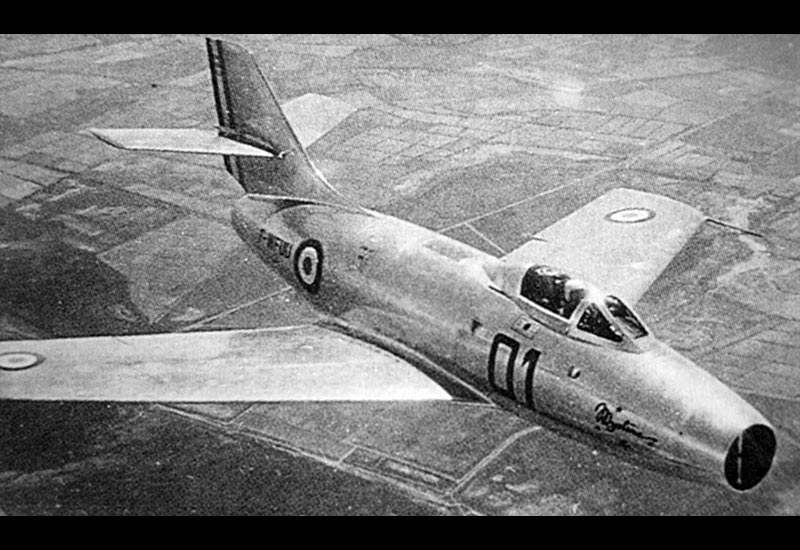 The Dassault Mystere was a straightforward swept-wing development of the earlier Dassault Ouragan jet fighter.

The German invasion and subsequent occupation of France damaged French aero-industry considerably going forward. However, the sector was quick to revitalize following the end of the war in 1945 and focused on new jet-powered developments - the primary success becoming the straight-winged fighter / fighter-bomber Dassault "Ouragan" ("Hurricane") of 1952. With several hundred examples being built, it was a technological success and was adopted by the French Air Force while also going to see service under the national flags of India, Israel and El Salvador. The French Air Force itself operated some 370 examples and the aircraft served into the 1980s.

With advancements being made in the field of swept-wing aerodynamics, thought soon turned to a swept-back wing version of the successful Ouragan. Work began on prototypes under the MD.452 "Mystere I" designation and resulted in a first-flight being had on February 23rdm 1951. Three prototypes made up this phase of the program and the powerplant of choice became the British Rolls-Royce Tay 250 turbojet engine of 6,300lb thrust - produced locally by Hispano-Suiza.

The Mystere I was nothing more than the Ouragan airframe with wing mainplanes showcasing 30-degree sweepback. The expected higher operating speeds also necessitated revisions to the tail surfaces but the basic look of the original fighter remained: the intake was at the nose with the exhaust port under the tail. The wings were set low at midships with the tail unit incorporating a single fin with mid-set horizontal planes. The pilot's position was just aft of the nose and ahead of the wing mainplanes. A retractable undercarriage was used for ground-running. All this was typical of jet fighters of the period.

This work evolved to welcome new prototype forms under the Mystere IIA name. Armament was decided on 4 x 20mm Hispano-Suiza automatic cannons capable of dealing considerable damage in short, controlled bursts to any then-known aerial target. The Mystere IIA became the first French-originated aircraft to exceed Mach 1 in flight when it took to a diving action on October 28th, 1951 (this was a common trait of many early jets, diving to achieve Mach 1 or greater though at the loss of some control).

From this spawned a batch of four evolved prototypes handed the Mystere IIB designation and this saw the cannon battery revised to 2 x 30mm DEFA types offering greater killing potential. The line was then graduated to the Mystere IIC standard which consisted of eleven pre-series / evaluation aircraft for to be used in additional testing. By this time, the SNECMA Atar 101C turbojet engine of 5,500lb thrust was in play as nine of the batch were completed with it while the remaining two flew with the SNECMA Atar 101F afterburning turbojet rated at 8,400lb thrust.

The pre-series aircraft reflected closely the finalized form of the Mystere jet fighter and it was this image that the French Air Force settled on when it contracted for 150 units. Service entry occurred in 1954 and production of the series spanned from 1951 until 1957, totaling 171 aircraft. First deliveries to the French Air Force commenced in October of 1954 and these arrived with the SNECMA Atar 101D turbojet engine of 6,600lb thrust as well as a few subtle changes to the airframe and wings.

The Mystere IIC had a crew of one sitting under a lightly-framed canopy and an overall length of 38.4 feet, a wingspan of 43 feet and a height of 14 feet. Empty weight was 11,520lb against an MTOW of 16,500lb. Power was from a SNECMA Atar 101D axial flow turbojet engine rated at 6,000lbf and performance included a maximum speed of 660 miles per hour, a range out to 550 miles with a service ceiling of 50,030 feet. Rate-of-climb was 4,500 feet-per-minute.

Aboard were 2 x 30mm DEFA autocannons with 150 projectiles afforded to each gun. The aircraft was also given provision for underwing rockets (2 x Matra pods with 18 SNEB rockets each) as well as four external hardpoints for the carrying of up to 2,000lb of ordnance or several fuel drop tanks to help increase range.

In service, the Mystere (IIC) had a poor record of accidents which limited its future with the French Air Force and these were mainly centered around structural failures - such was the risk of high-speed flight in these early days. This led the service to commit to the more promising Mystere IV (detailed elsewhere on this site) going forward and Mystere IIC aircraft were quickly relegated to training roles before seeing retirement.

The Mystere IIIN was a one-off prototype (three were planned) developed with a tandem, two-seat cockpit and lateral intakes (as opposed to the original nose-mounted one). This specimen first-flew on July 18th, 1952 but its flying days were short-lived. It spent the remainder of its time trialing ejection seats.

Contemporaries of the Mystere included the famous North American F-86 Sabre and classic Mikoyan-Gurevich MiG-15 fighters - all of similar form and function including swept-back wing mainplanes and nose-mounted intakes. These two examples saw considerably greater success than the French design and fought in the first jet-versus-jet duels in the Korean War of 1950-1953.

The Dassault Mystere was not exported and served solely with the French Air Force for its time in the air. Israel appeared set to order some twenty-four of the French fighters but elected for the Mystere IV instead.

France (retired)
(OPERATORS list includes past, present, and future operators when applicable)
✓ Air-to-Air Combat, Fighter
General ability to actively engage other aircraft of similar form and function, typically through guns, missiles, and/or aerial rockets. ✓ Ground Attack (Bombing, Strafing)
Ability to conduct aerial bombing of ground targets by way of (but not limited to) guns, bombs, missiles, rockets, and the like. ✓ Training (General)
Developed ability to be used as a dedicated trainer for student pilots (typically under the supervision of an instructor).

OPTIONAL:
2,000 lb of external ordnance to include conventional drop bombs and up to 12 x High-Explosive (HE) air-to-surface rockets.