The Sikorsky MH-60L Razors Edge SPECOPS helicopter, bristling with impressive armament, was featured in the Battle of Mogadishu.

Authored By: Staff Writer | Last Edited: 05/20/2021 | Content ©www.MilitaryFactory.com | The following text is exclusive to this site. 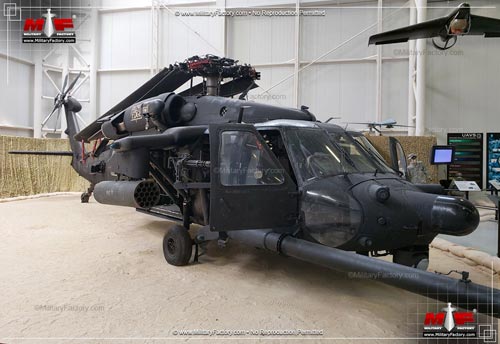 The Sikorsky UH-60 "Blackhawk" military transport helicopter was taken into American service in 1979 and quickly established itself as the go-to rotorcraft for the U.S. Army and other branches. In time, the type was evolved to cover other over-battlefield roles including anti-ship / anti-submarine, Search and Rescue (SAR), MEDEVAC, and SPECial forces OPerationS (SPECOPS). The line was progressing evolved throughout its life, resulting in many notable offshoots of the base line.

The UH-60L became an improved form of the UH-60 series and was ordered by the United States Army in 1987. The new variant took on all of the improvements added to the later UH-60A marks but also enhanced lifting power and performance thanks, in large part, to the installation of upgraded T700-GE-701C turboshaft engines tied to an improved transmission system. The arrangement was the same as proven in the SH-60B "Seahawk" offshoot and the UH-60L's Automatic Flight Control System (AFCS), as well as the folding main rotor blades, were also taken from this navalized, over-water form. The UH-60L mark entered production in 1989 and the run ended in 2007.

The MH-60L arrived as a special operations form of the UH-60L production model. The mark was a specially-modified, special-mission Blackhawk to serve the United States Army's 160th Special Operations Aviation Regiment (SOAR), better known as the "Night Stalkers", and was taken into service pending the arrival of the improved MH-60K mark. SOAR MH-60L helicopters incorporated Forward-Looking InfraRed (FLIR), a laser-rangefinder / target designator capability, auxiliary fuel system, and full-color weather map. In 2003, ten of the stock of thirty-seven MH-60Ls were given in-flight refueling probes (starboard side) to extended operational ranges.

SN 90-26288 "Super 68", also known as "Razor's Edge", was one of the UH-60L/MH-60L lot, a special forces model assigned to the 160th SOAR and modified as a Direct Action Penetrator (DAP) - intended to assist SPECOPs forces through direct-contact / direct-action in contested areas. It was delivered in 1990 and, like other Blackhawk marks, was progressively upgraded throughout its service life eventually seeing action in the Battle of Mogadishu and its subsequent "Blackhawk Down" scenario ("Operation Gothic Serpent"). Super 68 was one of the three Blackhawk systems claimed by enemy forces during the operation.

Retaining much of the form and function of the UH-60L/MH-60L lines, Razor's Edge was outfitted with specialized mission equipment that included a winch (located at the starboard side door), CounterMeasures (CMs), engine exhaust covers to reduce noise and IR output. The nose assembly sported a protrusion housing radar and a sensor pack was fitted to a "chin blister" offering excellent traversal from centerline from under the nose. The in-flight refueling capability, made possible by the large probe set to the lower side of the forward fuselage, allowed the specialized Blackhawk form to go beyond the range of a standard Blackhawk transport.

Razor's Edge / Super 68 was a fully-armed SPECOPs platform, given a 19-shot rocket pod along its starboard side, a 30mm automatic cannon along its port side, and a pair of 7.62mm electrically-driven miniguns at either fuselage side in fixed, forward-firing mounts. The helicopter was also known to mount AGM-114 "Hellfire" Anti-Tank, Guided-Missiles (ATGMs) as well as the "Stinger" short-ranged Air-to-Air Missile (AAM) based on mission need. The systems were affixed to the aircraft by way of wingstubs and support mounts, giving the helicopter the capability to deal with nearly any battlefield threat it may face.

The helicopter now resides at the Army Aviation Museum at Fort Rucker, Alabama where it was introduced into the collection during the latter part of 2013. It had served its entire operational life with the 160th SOAR.©MilitaryFactory.com
Note: The above text is EXCLUSIVE to the site www.MilitaryFactory.com. It is the product of many hours of research and work made possible with the help of contributors, veterans, insiders, and topic specialists. If you happen upon this text anywhere else on the internet or in print, please let us know at MilitaryFactory AT gmail DOT com so that we may take appropriate action against the offender / offending site and continue to protect this original work.
Advertisements

VERTICAL TAKE-OFF / LANDING (VTOL) Series has a tactical capability to take-off and / or land vertically, a quality commonly associated with helicopters.
RADAR-CAPABLE Houses, or can house (through specialized variants), radar equipment for searching, tracking, and engagement of enemy elements.
COUNTERMEASURES Survivability enhanced by way of onboard electronic or physical countermeasures enacted by the aircraft or pilot/crew.
ARMORING Survivability enhanced by armor allocated to protect pilot / crewspaces and / or critical operating systems.
MULTI-ENGINE Incorporates two or more engines, enhancing survivability and / or performance.
RUGGED AIRFRAME Inherent ability of airframe to take considerable damage.
EXTENDED RANGE PERFORMANCE Capability to travel considerable distances through onboard fuel stores.
A2A REFUELING Capability to accept fuel from awaiting allied aircraft while in flight.
MARITIME OPERATION Ability to operate over ocean in addition to surviving the special rigors of the maritime environment.
CREW-MANAGED Beyond a pilot, the aircraft takes advantage of additional crew specialized in specific functions aboard the aircraft.
GUN POSITIONS Defensive gun positions for engagement / suppression.
ENCLOSED CREWSPACE(S) Features partially- or wholly-enclosed crew workspaces.
ENHANCED ACCESS Design incorporates feature(s) that facilitates loading / unloading of cargo / personnel from the aircraft.

(Showcased performance specifications pertain to the Sikorsky MH-60L Razors Edge production variant. Performance specifications showcased above are subject to environmental factors as well as aircraft configuration. Estimates are made when Real Data not available. Compare this aircraft entry against any other in our database or View aircraft by powerplant type)
1 x 30mm Automatic cannon at port side mounting.
1 x 19-shot Folding-Fin Aerial Rocket (FFAR) rocket pod at starboard side mounting.
2 x 7.62mm M134 General Electric miniguns in side-fuselage mountings (one gun per side); fixed-forward-firing.

Also any personal weapons carried by the passengers. 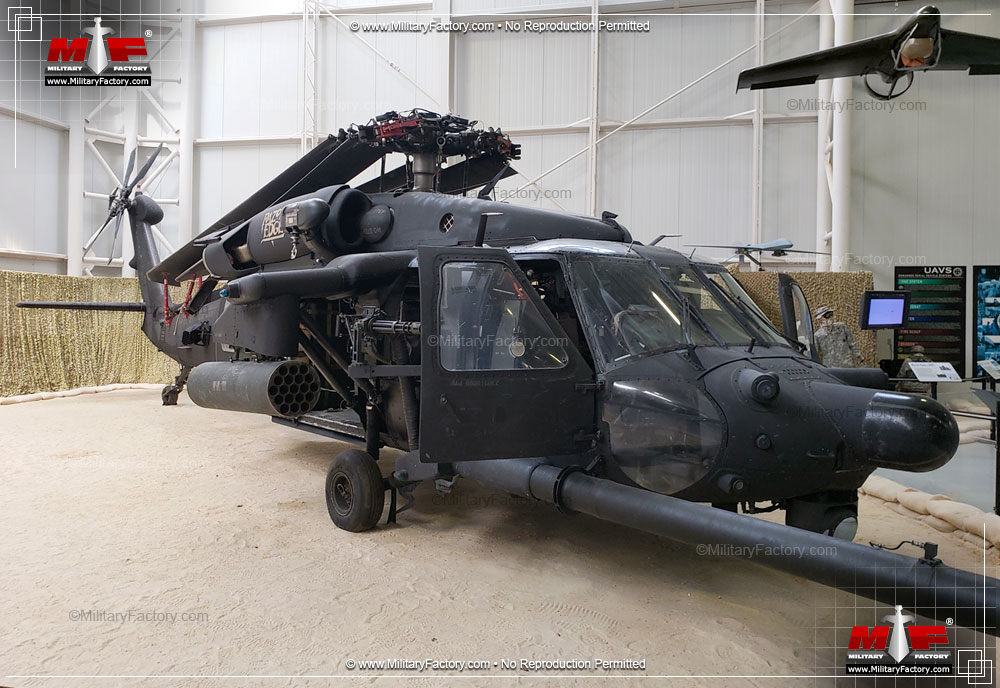 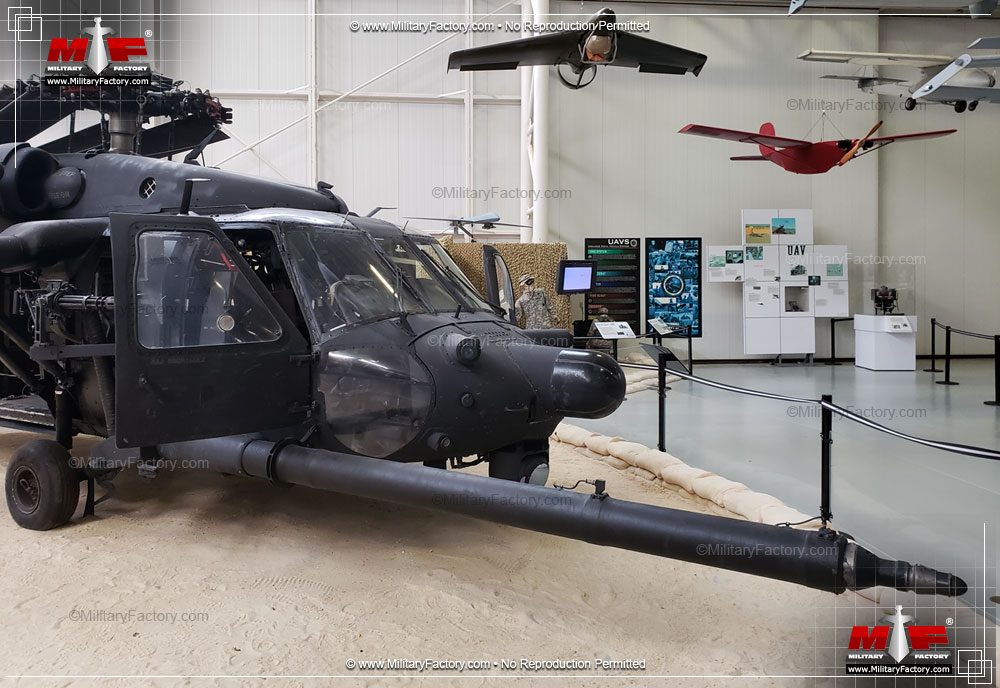 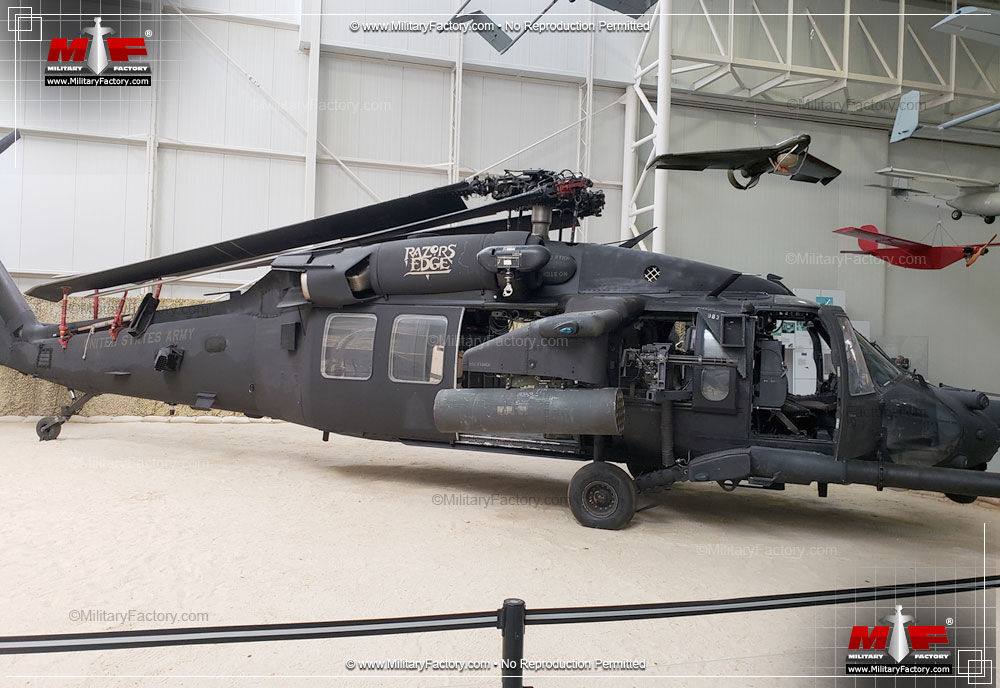 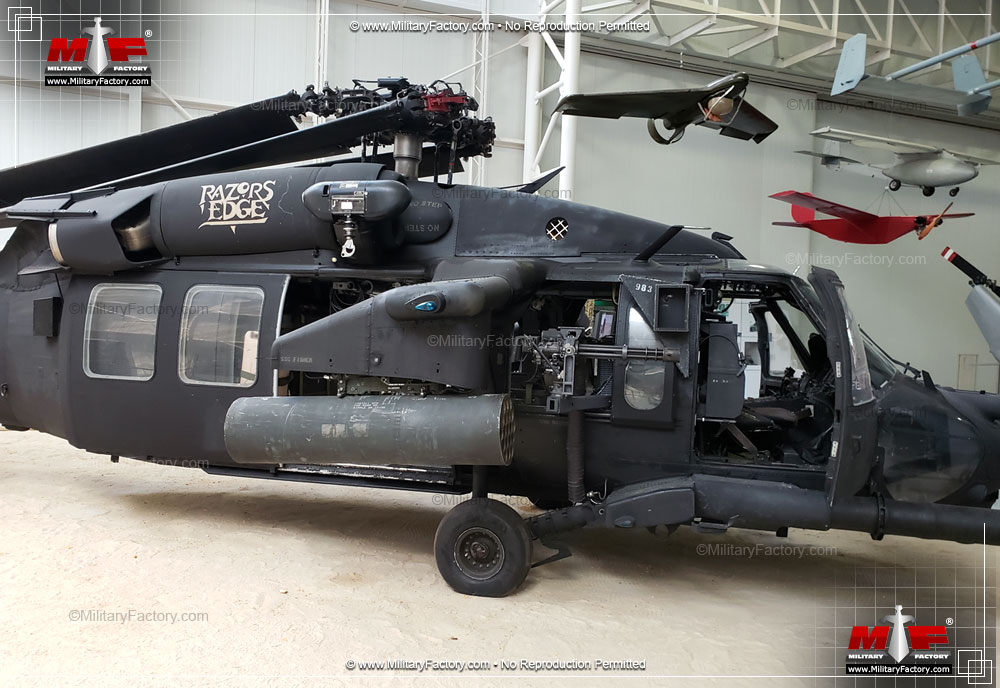 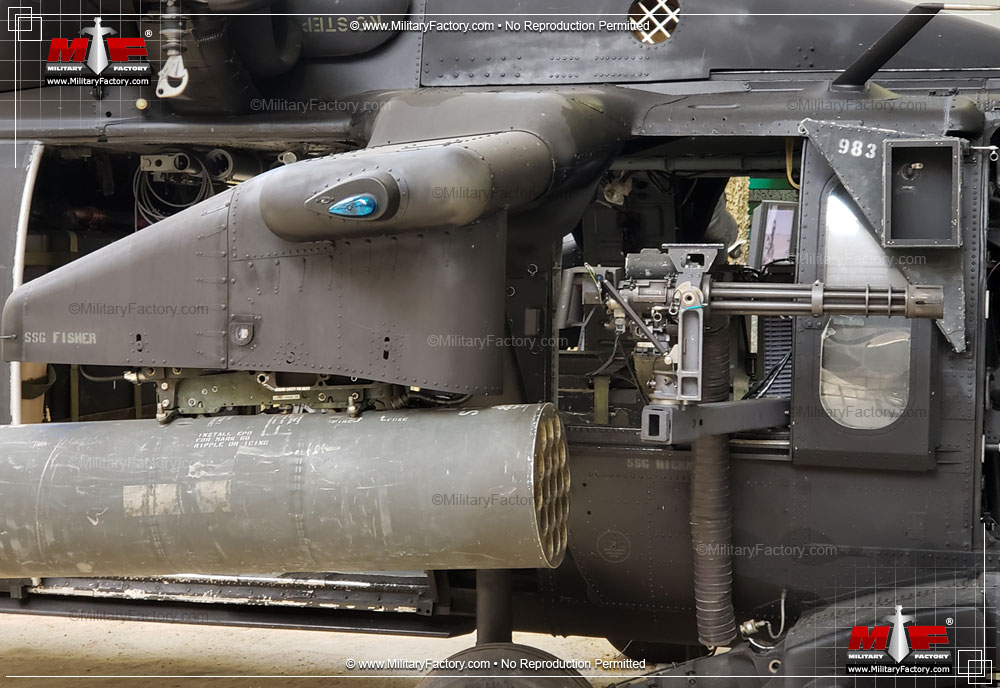 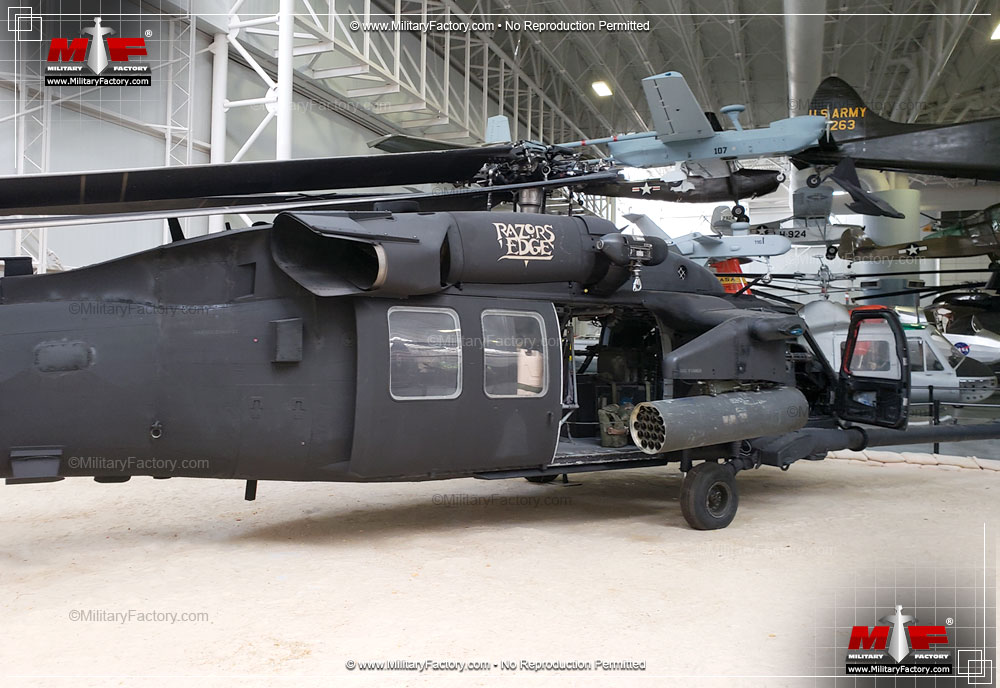 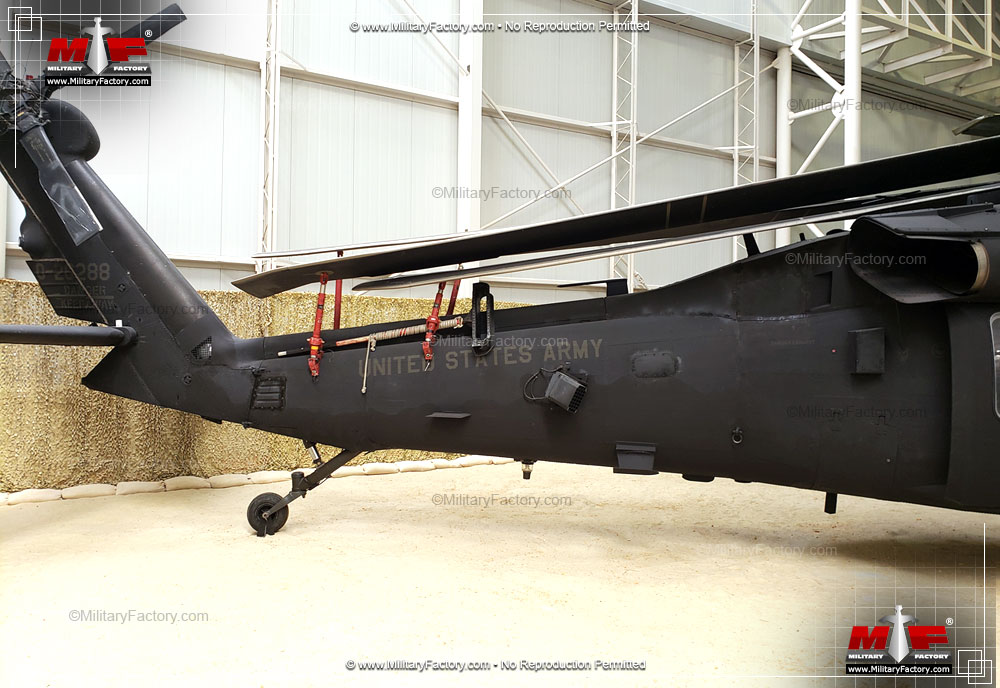 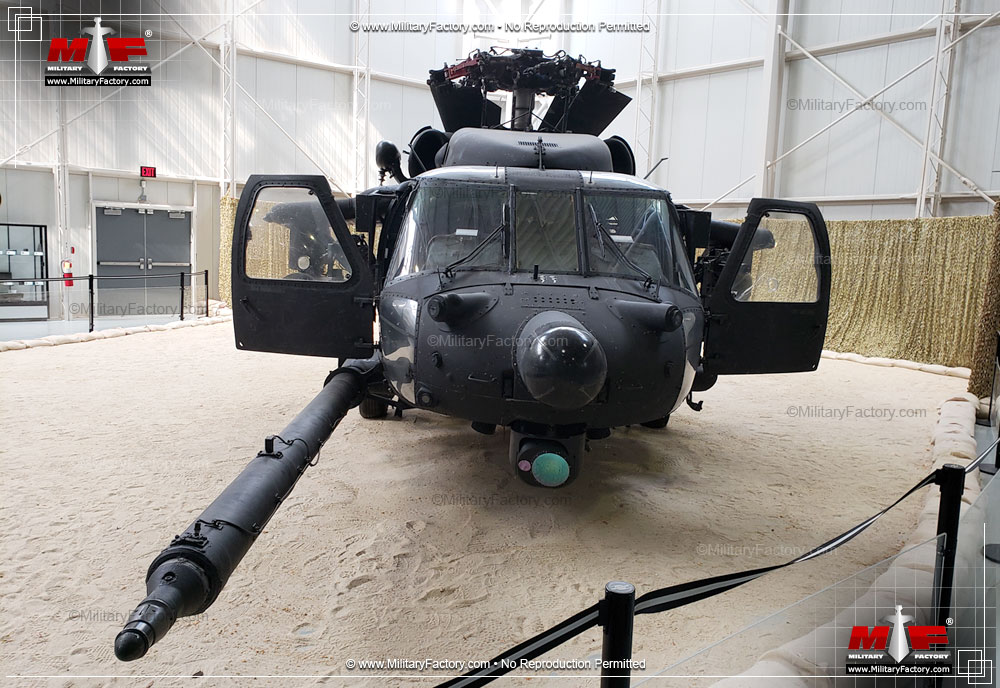 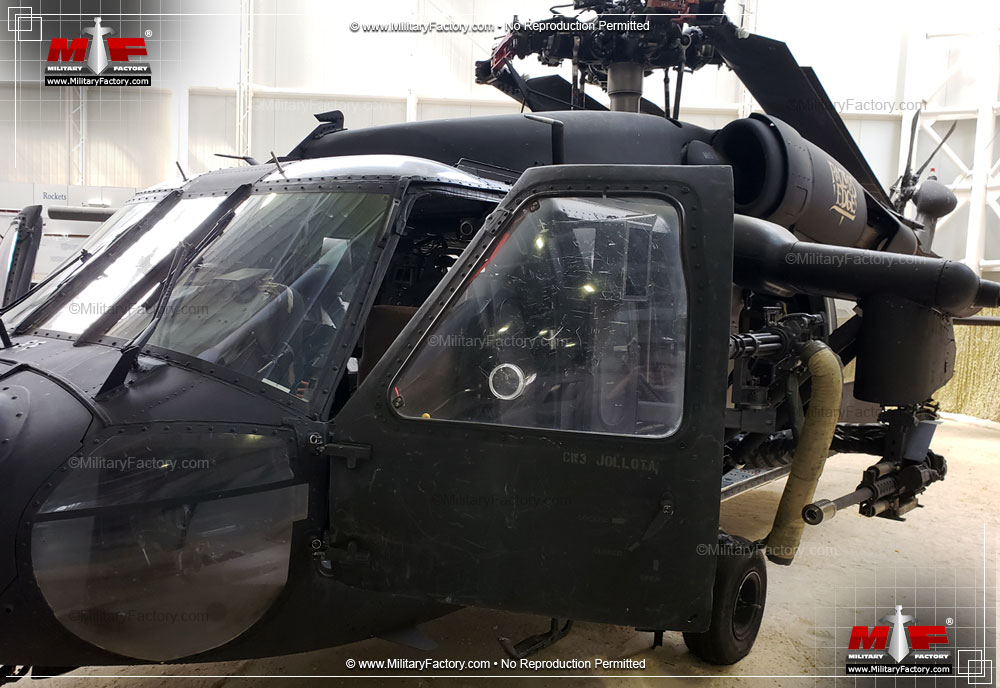 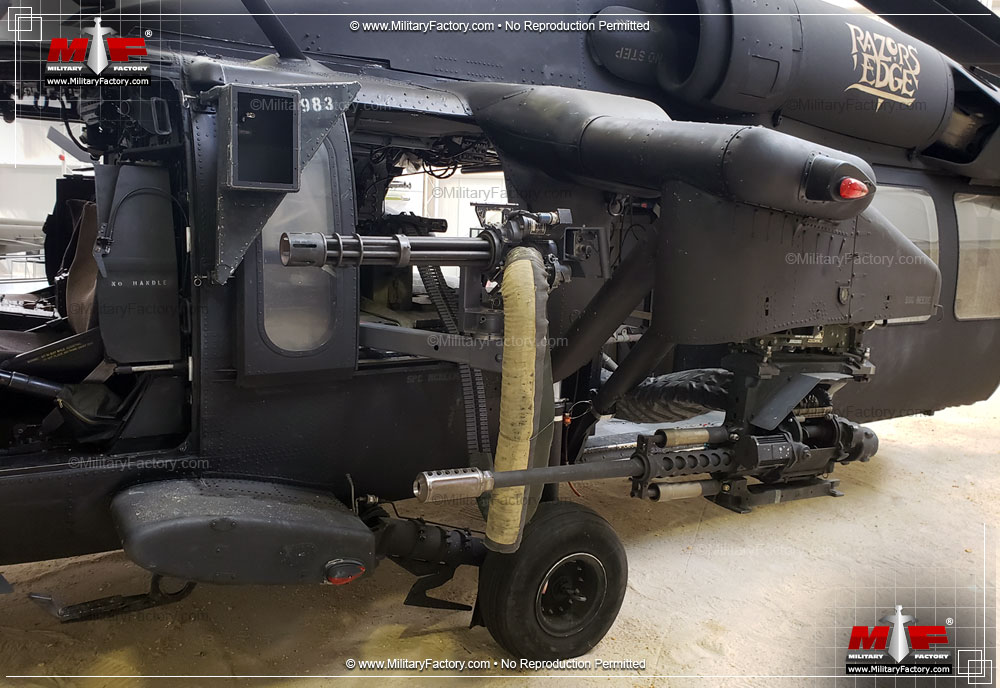 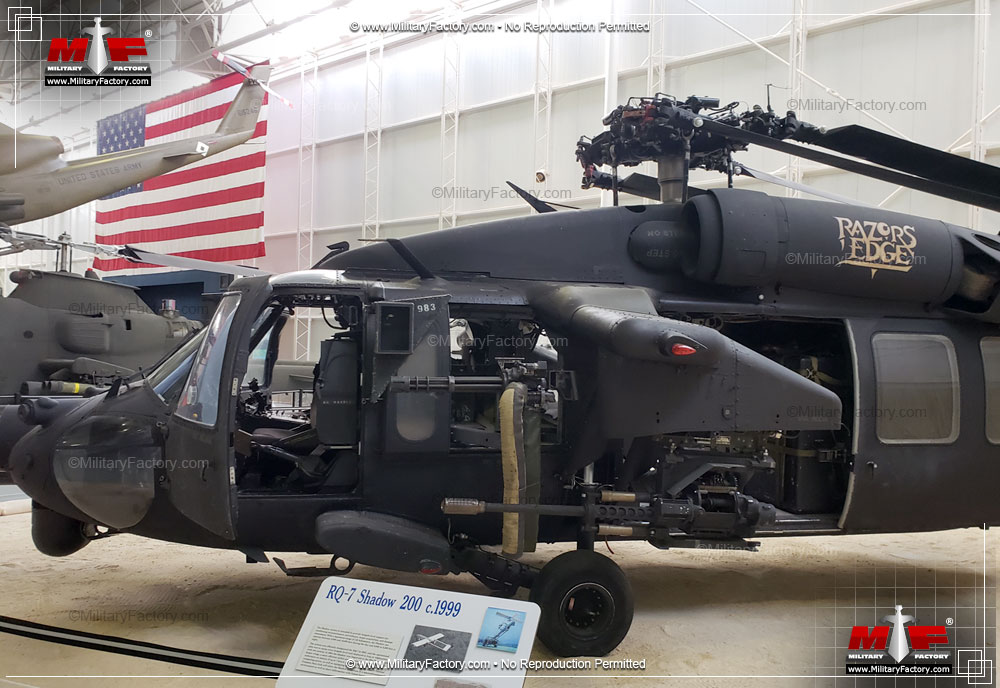 Aviation developments of similar form and function, or related to, the Sikorsky MH-60L/UH-60L (Razors Edge/Super 68)...