The end of the war in 1945 ended all hopes for the massive Kawanishi KX-3 very-heavy flying boat project of the IJN.

Authored By: Staff Writer | Last Edited: 05/29/2020 | Content ©www.MilitaryFactory.com | The following text is exclusive to this site. 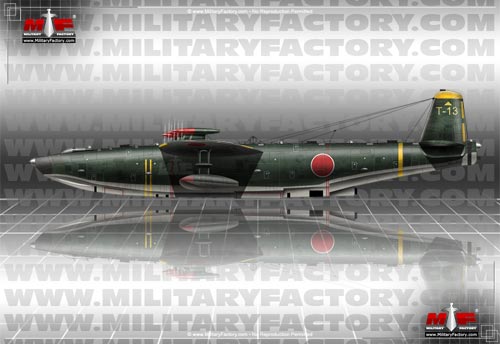 By 1943, fortunes for the Japanese Empire across its many holdings in the Asia-Pacific region of the world were turning for the worse. Its carrier force was being regularly defeated while its submarines went from being hunters to becoming the hunted. Similarly, the country's merchant fleet was under constant threat of attack from Allied forces in the Pacific meaning supplies and manpower could not be effective replenished between islands.

As this logistical nightmare grew for the Empire, authorities sought solutions - as desperate as some of the ideas may have appeared - to stave off complete defeat of its forces abroad. By this time, the Kawanishi Aircraft Company had already established itself as the premiere maritime airplane-builder for the Imperial Japanese Navy (IJN) through its line of respected products such as the H6K "Mavis" and H8K "Emily". In 1943, the concern was directed by IJN authorities to produce a massive, 500-ton multi-engined flying boat capable of hauling tons of cargo over-water to land-bases across the region - as expected logistics would be at the heart of this beast of an airplane and the project was designated "KX-3".

To this point in the war, there was no existing equal for which Kawanishi engineers could call upon for inspiration so the feat would be a considerable one fraught with design and technical challenges at every turn, least of all was in how to get such a large, magnificent airplane into the sky under its own power. The Germans managed just one flyable example of its Blohm & Voss Bv 238 and the American Hughes H-4 "Spruce Goose" could hardly be considered a success for its short time in the air.

Nevertheless, the challenge was laid at the feet of the company men and a team went to work on drawing up plans for the new machine. To expedite the development work, the company's own proven H8K flying boat was used as the starting point with all of its dimensions simply enlarged to suite the IJN requirement. This meant a boat-like hull for waterborne take-offs and landings and a wide-spanning wing mainplane to match it - the latter critical to providing the needed lift-and-drag. The mainplanes were be seated atop the fuselage spine with collapsing outboard sponsons supporting the massive appendages near their midway points. Long-running flaps would be affixed to the trailing edges of both wing members to add additional lift-and-drag when needed.

The fuselage was to be completed with slab sides and a rounded dorsal surface. The boat-like hull ran from underneath the nose assembly to the midway point of the empennage. The tail unit would feature a pair of high-reaching vertical fins for control, these supported on independent horizontal planes at the extreme end of the fuselage.

All told, dimensions of the aircraft, at least on paper, reached 531 feet long with a 590 foot wingspan and total height of 116 feet. Nothing at the time could even remotely match these specifications.

The chief concern, beyond the sheer size of the proposed aircraft, was in the power that would be required for it to fly. This resulted in a configuration involving no fewer than twelve Rikugun Kokugijutsu Kenkyuuju (RKK) Ne 201 turboprop engines each giving an estimated 1,870 horsepower and each unit driving multi-blade propeller units in puller fashion. To augment this would be four to six Mitsubishi Ne 330 turbojet engines (the technology courtesy of Germany's BMW). The jet engines would be installed in streamlined nacelles found outboard of the final turboprop at each wing mainplane. Altogether, it was hoped this combination powerplant mix could give the flying boat a good head of steam for take-off and crusing under load.

Beyond the advanced aeronautic aspects of the aircraft were more conventional issues such as self-defense. To defend the slow, lumbering aircraft from enemy fighters, the KX-3 would most likely follow in line with existing Kawanishi flying boats in terms of weaponry - a mix of automatic cannons and machine guns. While its defensive suite was never finalized, it can be assumed that the nose and tail would have been defensed by a 20mm automatic cannon (or similar) fitting while several dorsal turrets could have easily been installed along the vast length of the dorsal fuselage spine, each perhaps housing 2 x 13mm air-cooled heavy machine guns. Along with this would have been similar armament fittings located at each fuselage side.

At any rate, development of the expected turboprop engines proved slow and a technological nightmare and the slow evolution of the Japanese turbojet did not help matters. Couple this with the amount of valuable resources that would have been required in constructing the massive fuselage and wings of the flying boat with the deteriorating Japanese war situation and the KX-3 was doomed from the start. The program ended with little tangible work having been completed and the war itself drew to a close in August of 1945 - ending all prospects for this Kawanishi/IJN flying boat project.

As it stood, the KX-3 was to become the largest aircraft ever built anywhere in the world should it have been completed and flown as intended. Instead, it went down in history as another one of the unrealized "secret weapons" of World War 2.©MilitaryFactory.com
Note: The above text is EXCLUSIVE to the site www.MilitaryFactory.com. It is the product of many hours of research and work made possible with the help of contributors, veterans, insiders, and topic specialists. If you happen upon this text anywhere else on the internet or in print, please let us know at MilitaryFactory AT gmail DOT com so that we may take appropriate action against the offender / offending site and continue to protect this original work.
Advertisements

Fuselage hold rated for transportation of up to 900 combat personnel and equipment or similar regarding for general cargo / wartime supplies. 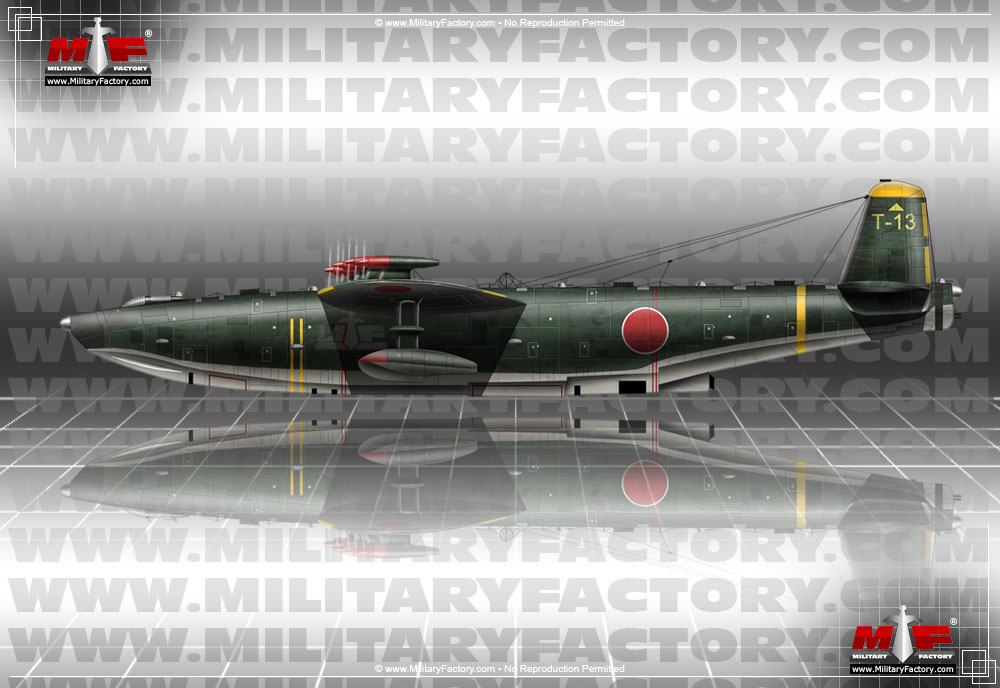