Despite the performance improvements of the the Fw 190D over the original A-models, its production was limited and the design was not without issues.

Authored By: Staff Writer | Last Edited: 07/23/2021 | Content ©www.MilitaryFactory.com | The following text is exclusive to this site. 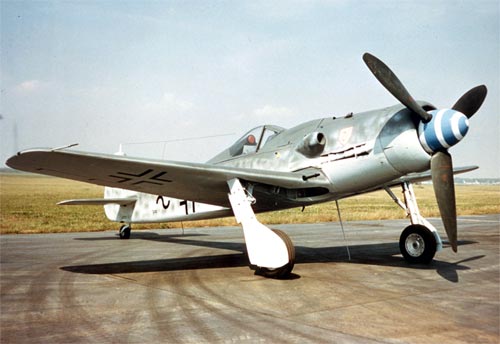 The original Focke-Wulf Fw 190 single-seat, single-engine fighter was one of two of Germany's primary frontline fighters during World War 2 (1939-1945) - the other becoming the Messerschmitt Bf 109 (detailed elsewhere on this site). Both were excellent in their own right and achieved their own separate levels of wartime fame for their time in the air. In its original form, the Fw 190 flew for the first time in June of 1939 and was introduced in August of 1939 and, by the end of the war, more than 20,000 of all types related to the original would be produced - marking it as one of the top five fighters of the entire war alongside the classic Supermarine 'Spitfire', North American P-51 'Mustang', and others. The related Fw Ta 152 was a late-war, long-nosed offshoot of the Fw 190 family line that was developed as a specialized, high-altitude fighter-interceptor - but production of this series was rather limited by wartime standards and held little impact on its result.

With its broad reach, the Fw 190 was progressively evolved as the war moved on through the years. In time, there proved a desperate need for the Luftwaffe to field a fighter with much better performance at higher operating altitudes and this initiative led to a series of experiments: the turbocharged, BMW801-powered "Fw 190B" and the turbocharged, DB603-equipped "Fw 190C". The end-goal was to counter the ever-existing threat of high-altitude Allied heavy bombers appearing with alarming regularity over German territories by late-1944. While the Ta 152 was developed for this same purpose, the Fw 190D variant would be used as an interim solution pending arrival of the more advanced aircraft.

All this led to a more definitive form of the Focke-Wulf fighter product, becoming the "Fw 190D" (named 'Dora' and 'Long-Nose Dora') which succeeded the earlier developments. The new arrival was powered by a Junkers Jumo 213 series 12-cylinder, inverted-V, liquid-cooled engine of supercharged form which proved a departure from the series' radial engines. Because of the longer powerplant in play, the D-models were given a lengthened nose section which, in turn, moved the aircraft's Center-of-Gravity (CoG) forward. As a result, the tail unit was lengthened to offset the change. In all, nearly five feet of new aircraft was added to the fuselage while many facets of the original Fw 190A remained including its central, single-seat cockpit and wing mainplanes. The new engine did, however, require reworking of the internals and a pressurized cockpit was also needed for the high operating altitudes expected of the new aircraft.

The Junkers Jumo 213A delivered an impressive 1,750 horsepower and could be called upon for 2,100 total horsepower output through the MW50 Emergency War Power (EWP) injection system, this resulting in short bursts of added performance. The MW50 feature was added only later in the aircraft's operational life as early models lacked this feature which did not endear the Dora to veteran pilots switching to the type - low altitude performance being very much reduced. Regardless, the Fw 190's maximum speed now increased from the original's 405 miles-per-hour capability to beyond 425 mph.

The end-result was a faster gunnery platform that could out-climb and out-dive contemporaries and could turn more quickly and benefit from the Fw 190's proven, excellent handling characteristics while losing its stellar rate-of-roll.

Armament for the basic Dora entry became 2 x 13mm MG131 machine guns set in the engine cowling and 2 x 20mm MG151/20E automatic cannons set in the wing roots, one cannon per wing root. All of the guns were synchronized to fire through the spinning propeller blades and could be switched on or off in pairs to conserve ammunition. This gave the fighter a good 'punch' against both Allied air and ground targets. The machine guns were granted up to 400 rounds-per-gun of 13mm ammunition while the cannons were given a supply of 250 rounds-per-gun. The airframe was also cleared to carry a single, optional 1,102lb SC500 conventional drop bomb at fuselage centerline.

The Dora entered the war during September of 1944 under the banner of squadron 3/JG.54 and overtook the existing Fw 190A models then in service. Early use of the type involved fighter cover for Messerschmitt Me 262 jet-powered fighters, particularly in their take-off and landing actions where the sluggish jet-powered aircraft proved their most vulnerable to Allied air attack. However, despite its given high-altitude role, the Fw 190D was operated more and more in the mid-to-low-level anti-fighter and ground attack roles which grew in precedence for the Luftwaffe as the war rolled into 1945. It did prove a strong counter to the P-51D and Spitfire Mk.XIV offerings that permeated the late-war skies for the Allies.©MilitaryFactory.com
Advertisements

The D-model's failing was in its late arrival into the war and its production totals were limited due to the lack of available fuel, parts, and veteran pilots. Regardless, the D-model became an excellent (if short-lived) entry into the Fw 190 fighter family line and its performance was exceptional at low-to-mid levels (the Dora gradually suffered at anything above 20,000 feet).

The Dora line included various sub-variants of its own that went beyond the base form. The original D-9 was produced in 1,850 examples and ran from the D-9/R1 to the D-9/R20 with manufacture beginning in August of 1944.

The definitive D-9 production form exhibited an overall length of 33.5 feet, a wingspan of 34.4 feet, and a height of 11 feet. Power was from the Jumo 213A engine of 1,750 horsepower driving a three-bladed constant-speed propeller unit at the nose. Performance included a maximum speed of 426 mph, a range out to 520 miles, and a service ceiling of 39,000 feet (though with reduced performance). Rate-of-climb was 3,300 feet-per-minute. Empty weight reached 7,700lb against an MTOW of 10,670lb.

The proposed Fw 190D-10 became an 'upgunned' fighter form with 2 x 20mm MG151 cannons in the wing roots backed by 2 x 30mm MK108 cannons in the outboard wing sections. This aircraft was slated to include a 30mm MK108 cannon in the nose firing through the propeller hub but, despite its promising nature, the D-10 was not pursued for serial production.

The Fw 190D-11 is believed to have been built in about seventeen total examples to go along with seven completed prototypes. These fighters came equipped with Junkers Jumo 213F series engines and carried enlarged supercharger intakes along the sides of the nose. The model also deleted the cowling machine guns in favor of 2 x 30mm MK108 automatic cannons outboard of the wing root cannons, similar to that of the D-10 - making for an all-cannon armament suite.

The subsequent Fw 190D-12 prototype introduced a hub-mounted automatic cannon (MK108) but only three examples were completed to the standard. The Fw 190D-13 was of similar form but had a 20mm cannon in the propeller hub instead - its total 20mm cannon armament count now reaching three for a formidable frontal punch. Two prototypes of this standard were completed from the Fw 190A-8 stock and these were further equipped with hydraulically-boosted ailerons. Despite production orders being handed out for the D-13, as few as two are believed to have ever seen operational service before the end of the war.

The Fw 190D-14, based on work completed in the earlier D-12 entry, was intended to fit a DB603 radial piston engine into the existing lengthened fuselage of the Fw 190D. This aircraft flew for the first time on November 20th, 1944 but was nevertheless cancelled in January of 1945 as attention turned to the follow-up D-15.

The Fw 190D-15 appeared in January of 1945 and was based in the Fw 190A-8/A-9 complete with the DB603 series engine and a lengthened tail section. However, the end of the war ensured that this model would not make an impact on the war - just a single prototype is thought to have been completed.©MilitaryFactory.com
Note: The above text is EXCLUSIVE to the site www.MilitaryFactory.com. It is the product of many hours of research and work made possible with the help of contributors, veterans, insiders, and topic specialists. If you happen upon this text anywhere else on the internet or in print, please let us know at MilitaryFactory AT gmail DOT com so that we may take appropriate action against the offender / offending site and continue to protect this original work.
Advertisements

RUGGED AIRFRAME Inherent ability of airframe to take considerable damage.
HIGH-SPEED PERFORMANCE Can accelerate to higher speeds than average aircraft of its time.
HIGH-ALTITUDE PERFORMANCE Can reach and operate at higher altitudes than average aircraft of its time.
BAILOUT PROCESS Manual process of allowing its pilot and / or crew to exit in the event of an airborne emergency.
ENCLOSED CREWSPACE(S) Features partially- or wholly-enclosed crew workspaces.
RETRACTABLE UNDERCARRIAGE Features retracting / retractable undercarriage to preserve aerodynamic efficiency.

(Showcased performance specifications pertain to the Focke-Wulf Fw 190D-9 production variant. Performance specifications showcased above are subject to environmental factors as well as aircraft configuration. Estimates are made when Real Data not available. Compare this aircraft entry against any other in our database or View aircraft by powerplant type)
Fw 190D-9:
2 x 20mm MG151 automatic cannons in the wing roots.
2 x 13mm MG131 heavy machine guns in the engine cowling.

(Not all ordnance types may be represented in the showcase above)
Hardpoint Mountings: 1
Mounting Points 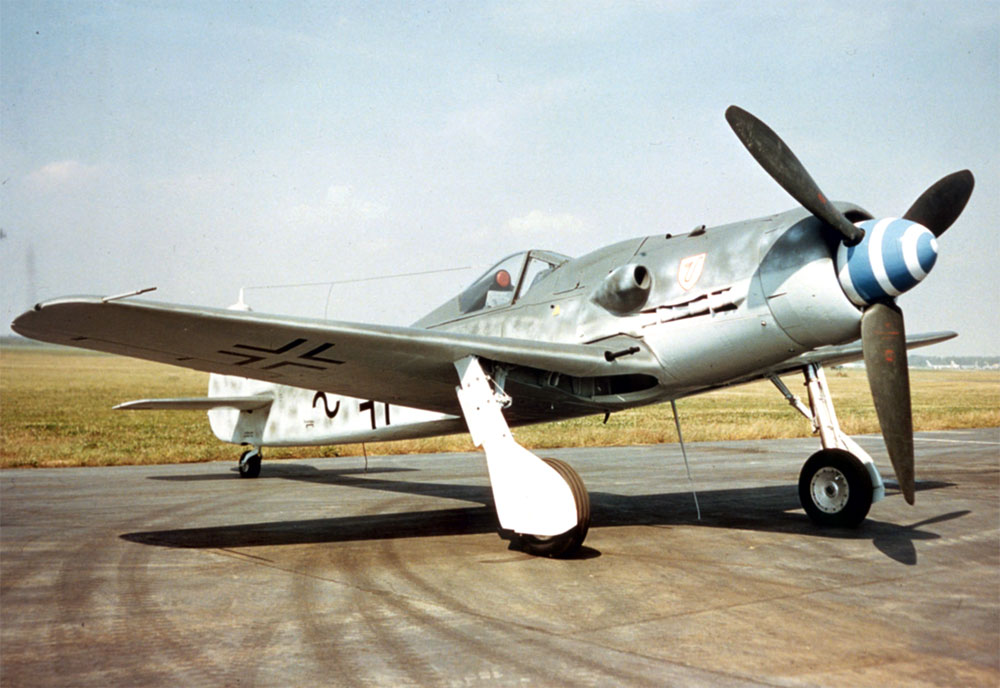 Image from the National Museum of the United States Air Force, Dayton, Ohio.