The Heinkel He 280 became the first-ever turbojet-equipped aircraft designed from the outset as a military fighter. 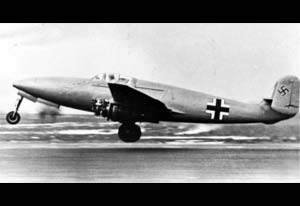 Turbojet technology was in its extreme infancy by the time of World War 2 (1939-1945) but it would soon be used to change the fortunes of many world powers moving forward. The Germans were able to make a great-many-strides with their development-minded, private venture Heinkel He 178 (detailed elsewhere on this site), the product becoming the world's first aircraft to fly solely under turbojet power. From this work, the company was able to further a more advanced monoplane form in the He 280 - the world's first aircraft to be designed from the outset as a military fighter.

The earlier He 178 was able to record a first-flight back on August 27th, 1939. The aircraft utilized a well-streamlined form with the cockpit at front, shoulder-mounted wings at midships, and a traditional single-finned tail unit. A tail-dragger undercarriage was featured for ground-running and the single HeS 3 series turbojet, offering 992lb of output thrust, was aspirated through the cut-off nose section. The framework for the He 280 was all but set now.

The newer aircraft was worked on into 1940 just as the war in Europe was entering critical stages for the Allies and Germany alike. Again, its development centered on a private venture initiative by the Heinkel concern as German authorities were not too interested in the investment for the moment - the war had, up to this point, "gone their way" more or less. The He 280 project was born back in late-1939 as "He 180" and headed by one Robert Lusser. The HeS 8 series turbojet (1,543lb of thrust output) was selected to power the new form.

The aircraft was given a streamlined fuselage, this time with a covered nosecone section. The cockpit was situated further back in the design but ahead of midships nonetheless. The wing mainplanes were mid-mounted and straight with rounded trailing edges. Unlike the He 178, the engine mountings were now slung under the wing mainplanes and two engines would be used to power the type - a necessity considering the relatively low power output of early turbojets. The tail unit was also rewritten with twin-vertical fins straddling the horizontal planes. For ground-running, a more modern tricycle gear arrangement was used - all three legs made retractable into the design.

The aircraft was being finalized in the middle of 1940 but its first-flight delayed some due to technical issues surrounding the HeS 8 turbojet. On September 22nd, 1940, the aircraft nevertheless went into the air in what was essentially a glider form. Its first turbojet-powered flight would have to wait until March 30th, 1941, realized through prototype He 280 V1. During this action the engines were uncowled for easy access to vital components. It was showcased to German authorities on April 5th, 1941 but, again, little serious interest in the project was had.

The program eventually netted nine total aircraft but these only ever existed in prototype form (i.e. not production-quality units readied for serial manufacture). He 280 V1 recorded the first use of a powered ejection seat action when its controls iced up in flight. Test pilot Helmut Schenk survived but the prototype was lost in the action.
Advertisements

He 280 V2 and He 280 V3 were a pair of early-form aircraft with the latter being readied into 1943 with some revisions to boot - particularly concerning the troublesome HeS 8 engine. The former would eventually be re-engined with the Junkers Jumo 109-004 turbojet engine at some point. That December, the He 280 V3 was showcased to German authorities, again, in a mock dogfight involving Germany's best fighter of the war - the classic Focke-Wulf Fw 190 single-engine, piston-driven monoplane.

It was this showing that finally convinced the German hierarchy to invest in the jet fighter program and led to a contract for twenty pre-production forms to iron out deficiencies in the design at the operational level. Once successful, a further three-hundred fighters would be ordered from Heinkel. To this point, it was known that the He 280 design carried weaknesses in its tail design (leading to cases of tail "flutter" in flight) and its tricycle undercarriage was weak on anything but prepared runways. Armament provision was limited and fuel stores restricted operating ranges no thanks to the dual turbojet arrangement which proved fuel-thirsty.

The He 280 V4 followed with BMW 109-003 turbojet engines before being reworked to accept six Argus 109-014 pulsejet engines. The He 280 V5 was completed with HeS 8 engines before being graduated to BMW 109-003 engines. V5 also incorporated 3 x 20mm MG151 autocannons as standard armament. He 280 V6 followed with the same forward-facing, fixed battery. He 280 V7 was completed with BMW 109-004 turbojet engines and relegated to high-speed testing for its service life. He 280 carried BMW 109-004 turbojets but included a V-style tailplane arrangement to differentiate it from earlier He 280 marks. The final prototype, He 280 V9, was powered by BMW 109-003 engines.

The German Air Ministry eventually forced airplane makers towards the newer, more advanced HeS 011 series turbojet engine due to ongoing issues with the HeS8 and HeS 30 turbojet models. However, the advanced nature of this new engine was equally problematic for engineers. This is where pulsejets allowed at least some further development to take place regarding the He 280 prototypes. Similarly, the BMW 003 and Junker Jump 004 turbojets were options.

Due to all of its inherent limitations, the Messerschmitt Me 262 "Schwalbe" twin-jet-powered fighter was selected ahead of the He 280 to become Germany's first jet fighter in the war. As such, the He 280 was cancelled in full on March 27th, 1943, and Heinkel was forced to concentrate on German bomber production and development for the remainder of the war.
Advertisements

(Showcased performance specifications pertain to the Heinkel He 280 V5 production variant. Compare this aircraft entry against any other in our database or View aircraft by powerplant type)
ORIGINALLY PROPOSED:
6 x 20mm MG 151 cannons.

General Assessment
Firepower
Performance
Survivability
Versatility
Impact
Values are derrived from a variety of categories related to the design, overall function, and historical influence of this aircraft in aviation history.
Overall Rating
The overall rating takes into account over 60 individual factors related to this aircraft entry.
30
Rating is out of a possible 100 points.
Relative Maximum Speed
Hi: 750mph
Lo: 375mph
This entry's maximum listed speed (559mph). 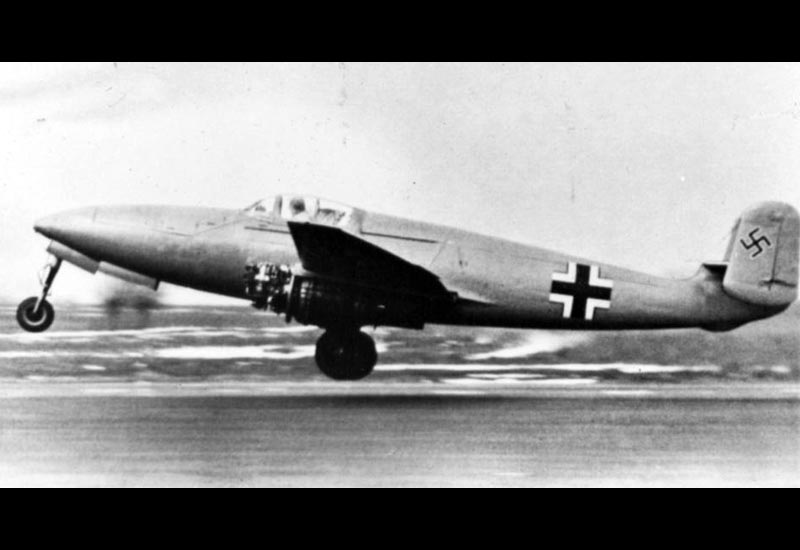 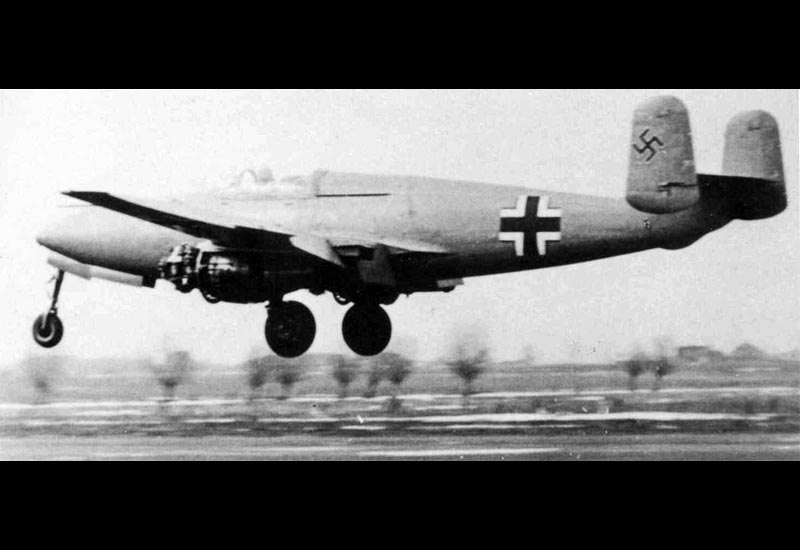 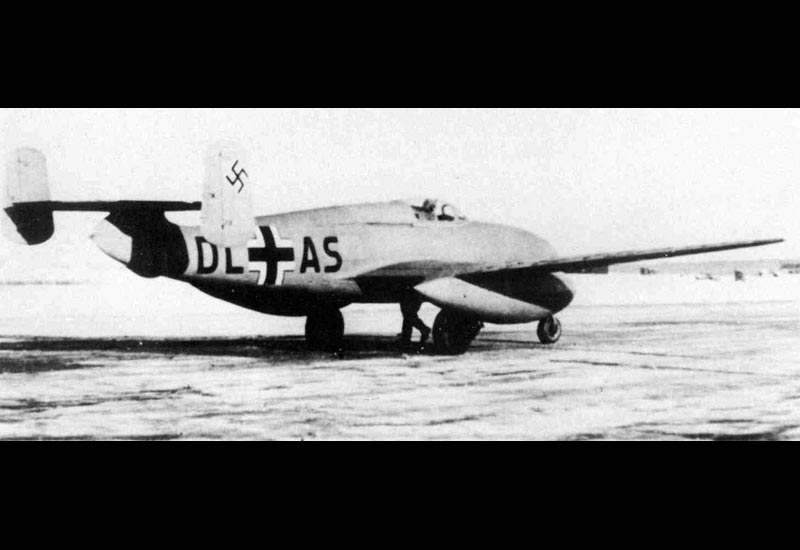 Aviation developments of similar form and function, or related to, the Heinkel He 280...