The Focke-Wulf Fw BMW802 was a design study into the feasibility of mounting the powerful BMW802 radial into the existing Fw 190 airframe.

Authored By: Staff Writer | Last Edited: 08/03/2019 | Content ©www.MilitaryFactory.com | The following text is exclusive to this site. 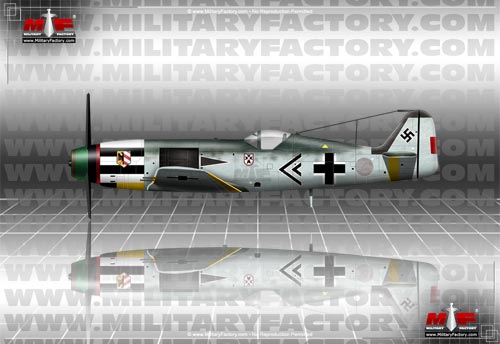 Even as World War 2 (1939-1945) was in full swing in 1941, design studies undertaken by German engineers were looking to exact additional power and performance from existing combat fighter types. One viable candidate became the classic Focke-Wulf Fw 190 piston-engined fighter which was only just introduced in August of that year and these studies looked to further the fortunes of the war for Germany. An offshoot project of this aircraft was an entry which attempted to showcase the feasibility of adding the still in-development BMW 802 series 18-cylinder, supercharged, twin-row, air-cooled radial piston engine in place of the original radial installation (at its core the new engine was essentially an 18-cylinder form of the earlier 14-cylinder offering). However, the project - recognized generically as the Fw "BMW 802" - did not advanced beyond the paper stage.

The Fw BMW 802 proposal retained the complete aft fuselage section, tail unit, undercarriage, and cockpit of the original Fw 190 production fighter. The major changes were to the nose and wing mainplanes. The nose was now intended to mount the powerful new engine which was set to take up a considerable amount of space, forcing the nose section to be extended well-beyond the cockpit which, in turn, was forced further back in the design - reducing forward visibility. As the new engine was still air-cooled, a cut-off nose was used for aspiration and the complete unit drove a conventional three-bladed propeller unit (variable pitch) in tractor fashion. A traditional tail-dragger undercarriage would be used for ground-running.

The wing mainplanes were revised to sport dihedral (upward angle) just outboard of the main landing gear leg housings. Furthermore, these members were lengthened due to the performance expected out of the new, faster fighter (similar to what was done in the Focke-Wulf Ta 152 high-altitude fighter seen before war's end). The wings were given little sweepback at their leading edges and tapered considerably towards the rounded tips from thee trailing edges. As the position of these members was also ahead of the pilot, frontal vision was further hindered.

In terms of armament, no weapons set was finalized though it can be assumed that there would have been a permanent switch to all-cannons, perhaps fitted to the wings in pairs, to provide the fighter with excellent killing power and clear the nose section for the large engine. Additionally, a limited bomb-carrying capability can be suspected - with the typical three-hardpoints available to most every fighter of the war - a single point under the fuselage and one position under each wing. In addition to this, the hardpoints would have most likely been plumbed for jettisonable fuel tanks when needing to extend the aircraft's operational range.

The promising fuel-injected BMW 802 offered up to 2,600 horsepower initially and settled near 1,600 horsepower and had the potential to truly increase all performance aspects of the Fw 190 fighter. However, it was not run until 1943 as its development proved troublesome and lengthy, ultimately leading to its abandonment in favor of furthering turbojet engine technology. As such, any advanced fighter form intending to fit the BMW 802 was abandoned in turn.

A more evolved version of the Fw BMW 802, designated the "P.8011", intended to fit a modified version of the same BMW 802 engine in the nose to drive contra-rotating propeller units. Many qualities of the original Fw BMW 802 were to be carried over in this entry but neither advanced into anything worthwhile.

In any event, the high-performance, high-altitude role was eventually filled by such types as the Ta 152 (detailed elsewhere on this site).©MilitaryFactory.com
Note: The above text is EXCLUSIVE to the site www.MilitaryFactory.com. It is the product of many hours of research and work made possible with the help of contributors, veterans, insiders, and topic specialists. If you happen upon this text anywhere else on the internet or in print, please let us know at MilitaryFactory AT gmail DOT com so that we may take appropriate action against the offender / offending site and continue to protect this original work.
Advertisements

(Showcased performance specifications pertain to the Focke-Wulf Fw BMW802 production variant. Performance specifications showcased above are subject to environmental factors as well as aircraft configuration. Estimates are made when Real Data not available. Compare this aircraft entry against any other in our database or View aircraft by powerplant type)
ASSUMED, FIXED, FORWARD-FIRING:
4 x 20mm MG151 automatic cannons in wings (two per wing member).

Up to 1,105lb of conventional drop stores across three hardpoints (under belly, one each under wing) as required. Also support for jettisonable fuel tanks across all three hardpoints. 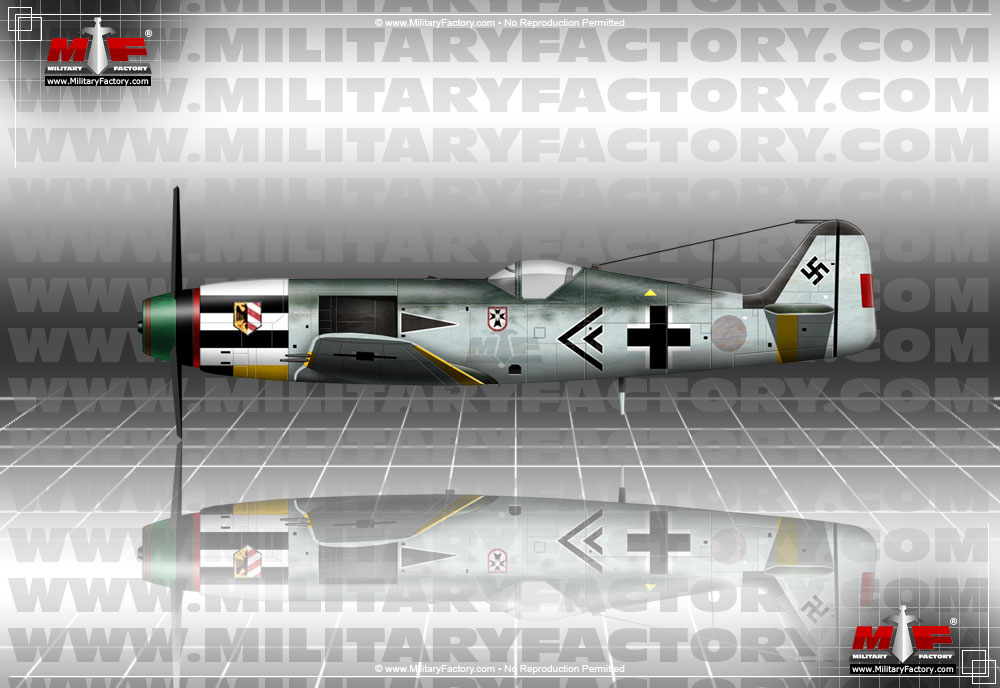