Authored By: Staff Writer | Last Edited: 05/24/2019 | Content ©www.MilitaryFactory.com | The following text is exclusive to this site. 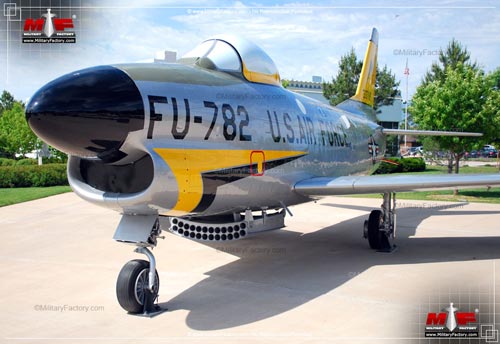 The F-86D "Sabre Dog" (also known as "Dog Sabre") belonged to the family of single-seat, single-engine F-86 "Sabre" jet-powered fighters which made their combat debut in the Korean War (1950-1953). The D-model became an extensive reworking of the production A-model airframe in an effort to produce an effective all-weather, radar-equipped interceptor to rapidly counter a growing Soviet bomber threat. The result was an aircraft that shared no more than 25% with its sisters as the Sabre Dog integrated a nosecone (shrouding its radar fit) as well as an dimensionally larger fuselage with new, more powerful afterburning turbojet engine and enlarged tail surfaces. All this made for an aircraft with a broadened mission scope possessing excellent anti-bomber firepower, more internal volume, better performance, and improved controlling.

With a first-flight in prototype form recorded on December 22nd, 1949, the aircraft went on to see production reach 2,847 total units. Such was the importance of the type that it was also used by many NATO players of the Cold War (1947-1991) period. The last Sabre Dog was completed in September of 1953.

The Sabre Dog began life as the developmental "YF-95A" of which two prototypes were built to the standard (production forms were slated to become "F-95") to prove the design sound. North American engineers reworked the nose-mounted intake of the A-model to better fit the radome and its intended radar unit ahead of the pilot's position. Along with this was integrated the Hughes Fire Control System (FCS) which was tied to a retractable ventral (belly) rocket pack containing no fewer than 24 x 2.75" (70mm) "Mighty Mouse" air-to-air Folding-Fin Aerial Rockets (FFARs). The six machine guns of the A-model fighter was completely removed as a result - these having little value in the high-speed, high-altitude interceptor role.

In this single-crew arrangement, the FCS was to direct aircraft and pilot to within 500 yards of the target to which point the ventral rocket pack was automatically lowered and the rockets fired without direct control by the pilot. This was a departure from other interceptor designs of the period which typically involved a second crewman handling the radar direction duties.

Beyond this exceptional trait, the resulting Sabre Dog retained much of the form and function of the original classic Sabre fighter. Its nose-mounted, oval-shaped air intake aspirated the single turbojet installation behind the pilot and this system exhausted through a single port under the tail at the extreme aft of the fuselage. The pilot retained his commanding placement behind the short nose section and under a lightly-framed clear-view canopy. The tail unit incorporated a single vertical fin with low-set horizontal planes, all featuring sweepback along their leading and trailing edges. The mainplanes were low-mounted along the fuselage sides and swept back for high-speed flying envelopes. For ground-running, there was a conventional, retractable, and wheeled tricycle undercarriage. Each wing supported an optional fuel drop tank for increased operational ranges required of interceptor types.

The engine of choice became the General Electric J47-GE-17B afterburning turbojet offering 7,500lb of thrust. Maximum speed reached 715 miles-per-hour and range was out to 330 miles. The aircraft's service ceiling was listed at nearly 50,000 feet and rate-of-climb became 12,150 feet-per-minute.
Advertisements

The developmental YF-95A was eventually redesignated to "YF-86A" and entered production as the "F-86D" to which followed 2,504 examples were built to the finalized standard. The "F-86G" designation was briefly used to cover aircraft featuring an uprated engine as well as different equipment and these went on to be completed under the F-86D designation (406 built).

The D-model was seen as a fine candidate for export, particularly to NATO players across Europe, so this begat the export-minded "F-86K" which was proven first under the developmental "YF-96K" designation. These Sabre Dogs lost their ventral Mighty Mouse rocket packs and instead took on 4 x 20mm M24A1 automatic cannons tied to an APG-37 series radar unit. While North American contributed 120 to production of this mark, FIAT of Italy delivered some 221 units before the end.

The subsequent "F-86L" Sabre Dogs were F-86D production forms with all-new electronics fitted as well as a revised instrument panel. Changes were also had to the wing mainplane leading edges which also now featured extended wingtip sections. Internally, there was a more powerful engine fitted to help increase performance. Some 981 conversions were ultimately built to this standard.

Global operators were plenty with Denmark receiving a stock of ex-USAF D-models in the late 1950s. France operated FIAT-built Sabre Dogs for a brief time in the latter part of the 1950s. The West German Air Force took on 88 ex-USAF K-models and used them from the middle of 1957 until the middle of 1958. Another ex-USAF F086D operator became Greece which took on a stock of 35 aircraft and these remained available until 1969. Six K-models were delivered to the Honduran Air Force in 1970. FIAT of Italy managed production of 121 K-models for the Italian Air Force and took on the 120 units produced by North American (K-models).

The Japan Air Self-Defense Force operated 122 ex-USAF D-models and used them from 1958 until 1961. The Dutch received 57 K-model Sabre Dogs from the United States and a further six examples from FIAT. Norway used sixty total K-models arriving from the U.S. from 1955 until 1956. The Philippine Air Force received 20 D-models while the South Korean Air Force took on forty of the same mark from June 1955 onward. Twenty L-models made their way to Thailand and 32 F-models were seen in Venezuela with an additional 79 K-models (FIAT-built) handed down from West Germany in time. Yugoslavia received 120 D-models and these remained active from 1961 into 1974.

The USAF gave up use of the D-models by June of 1961 as newer, better interception options had become available by then.
Advertisements 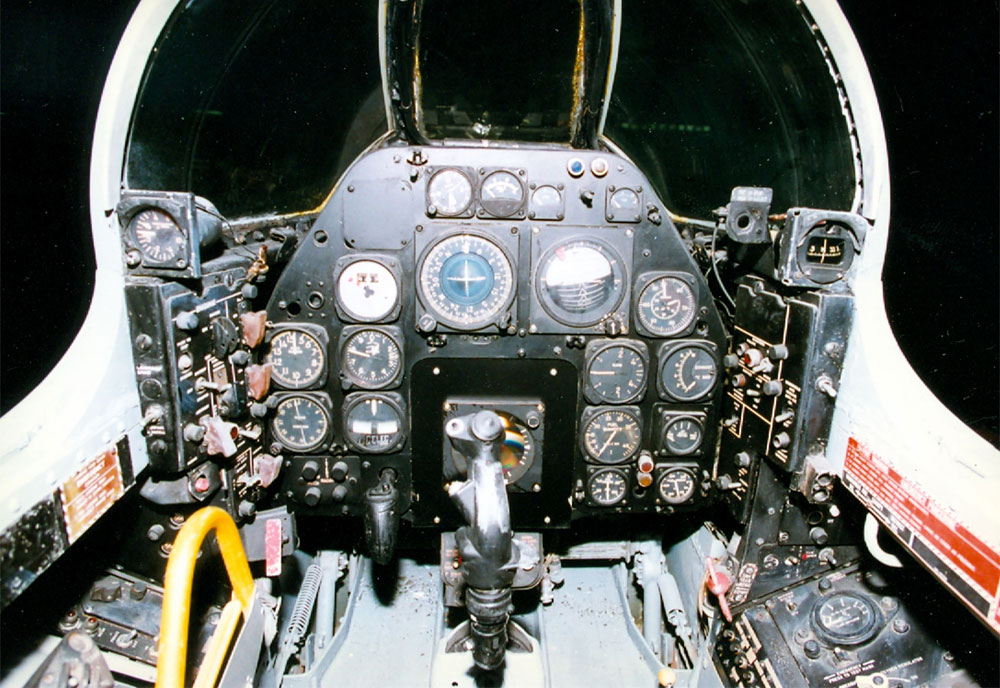 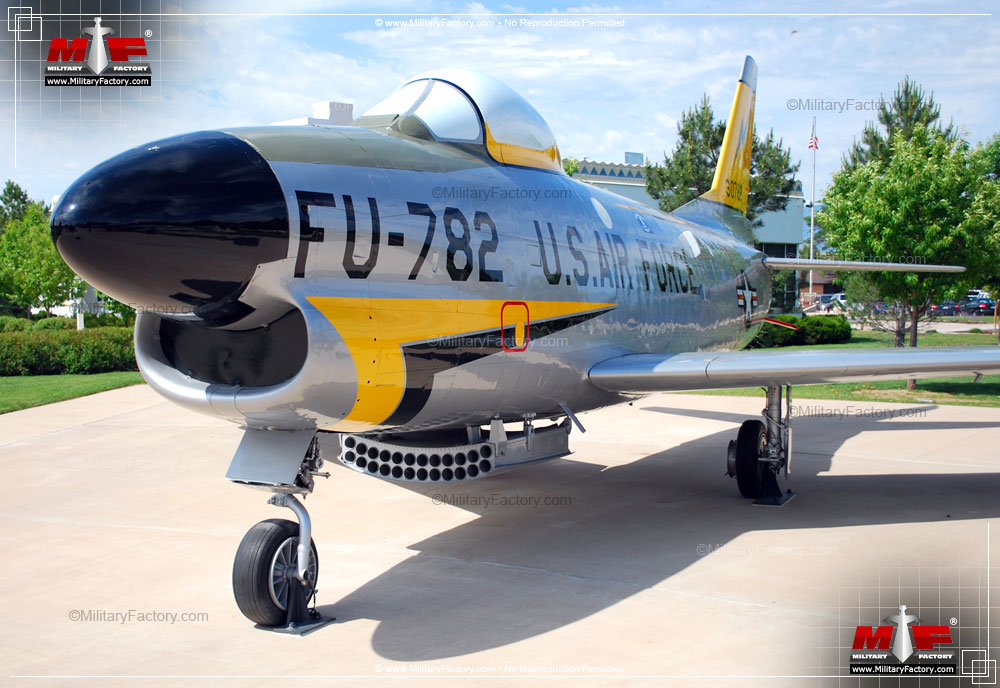 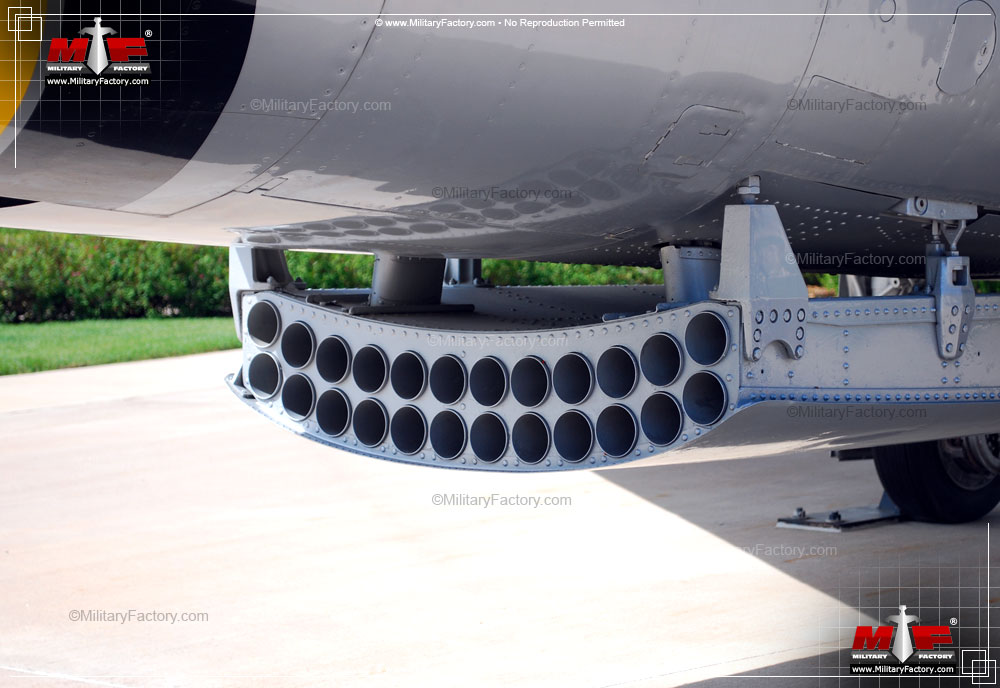 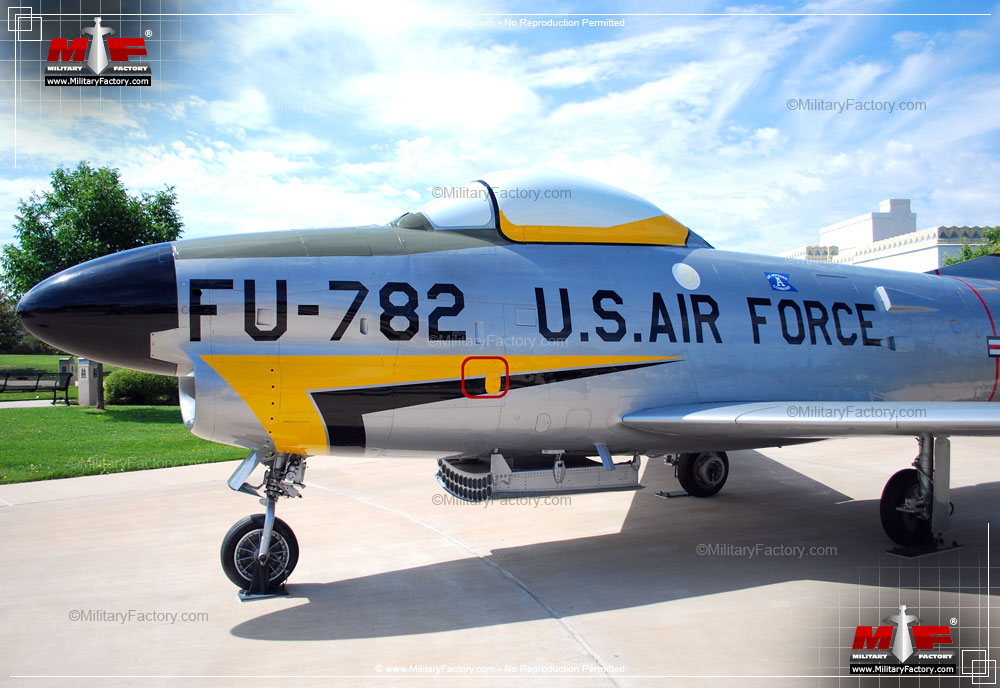 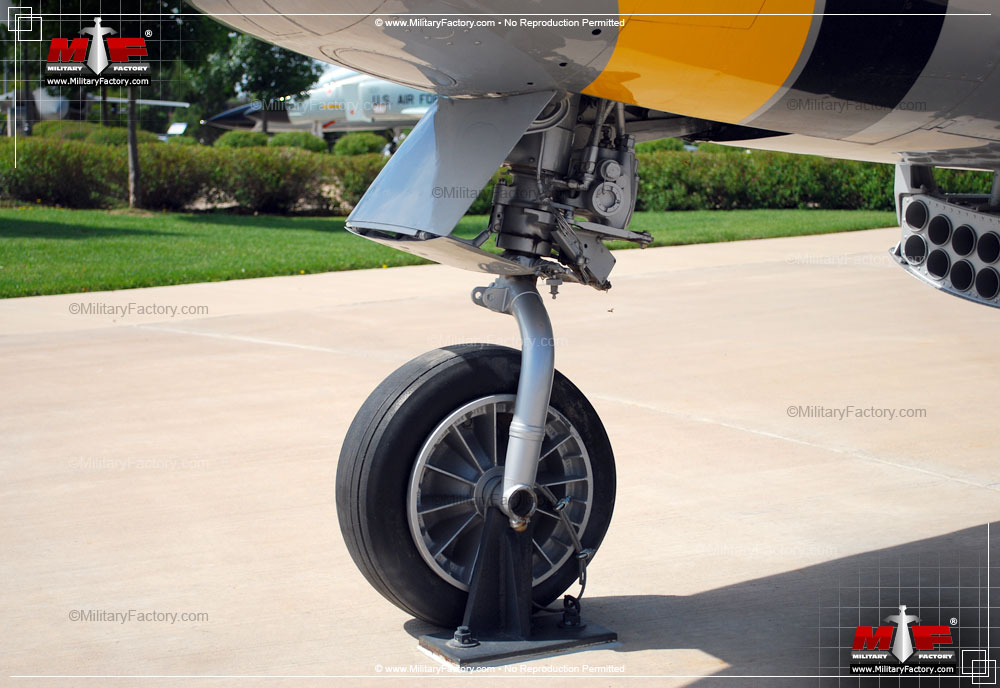 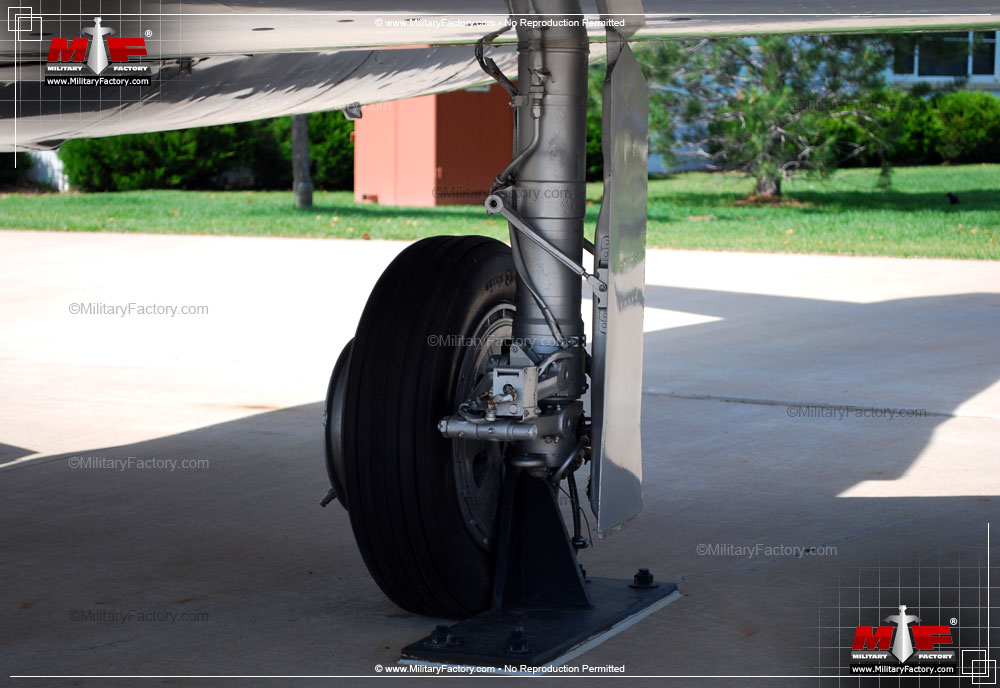 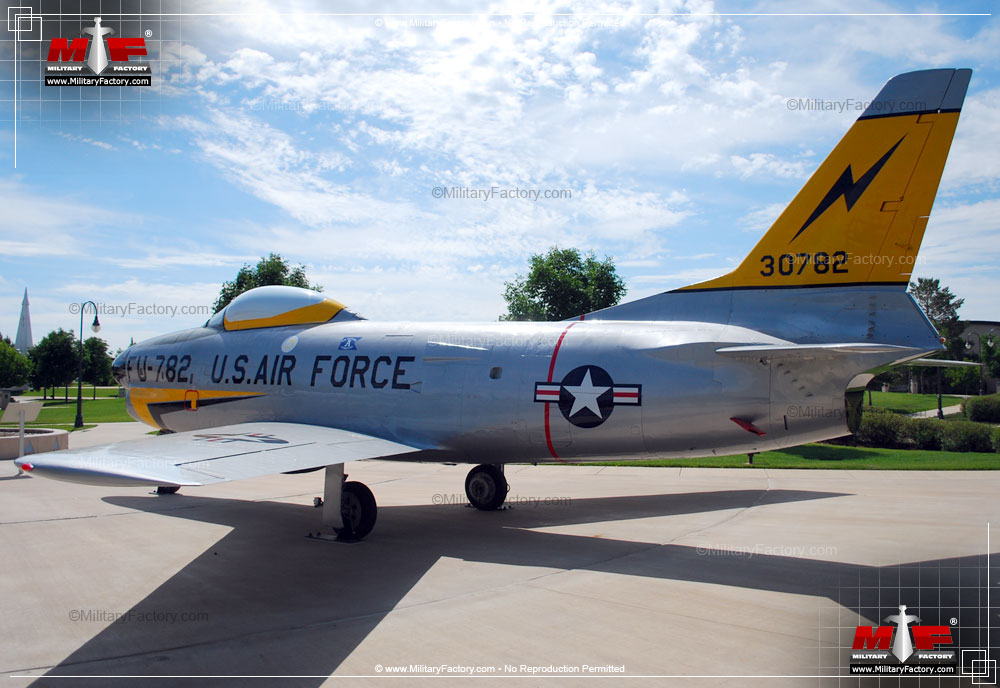 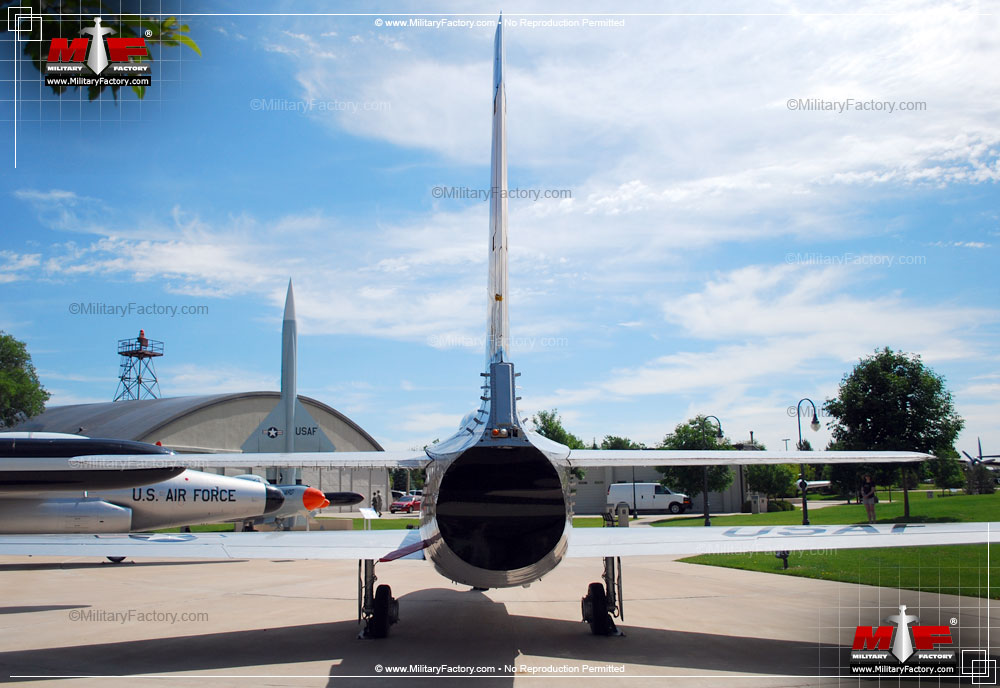 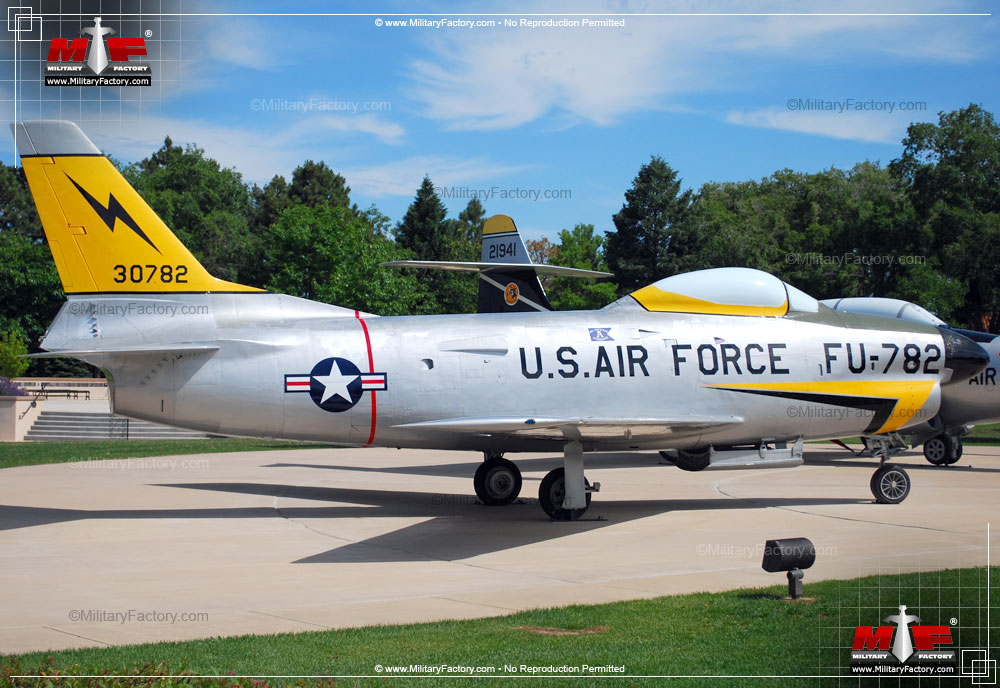 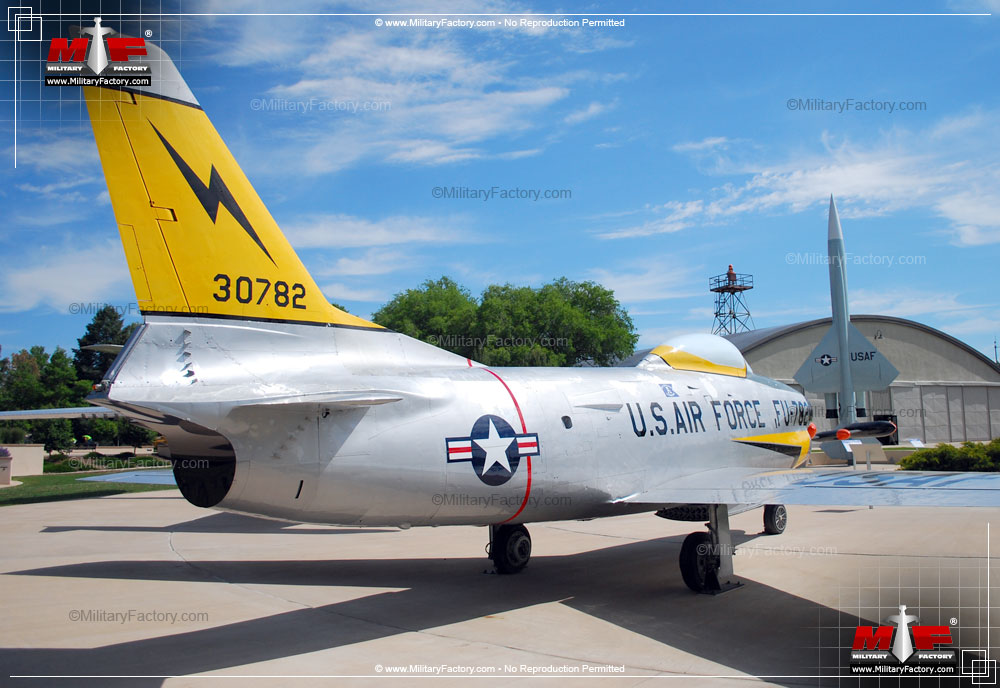 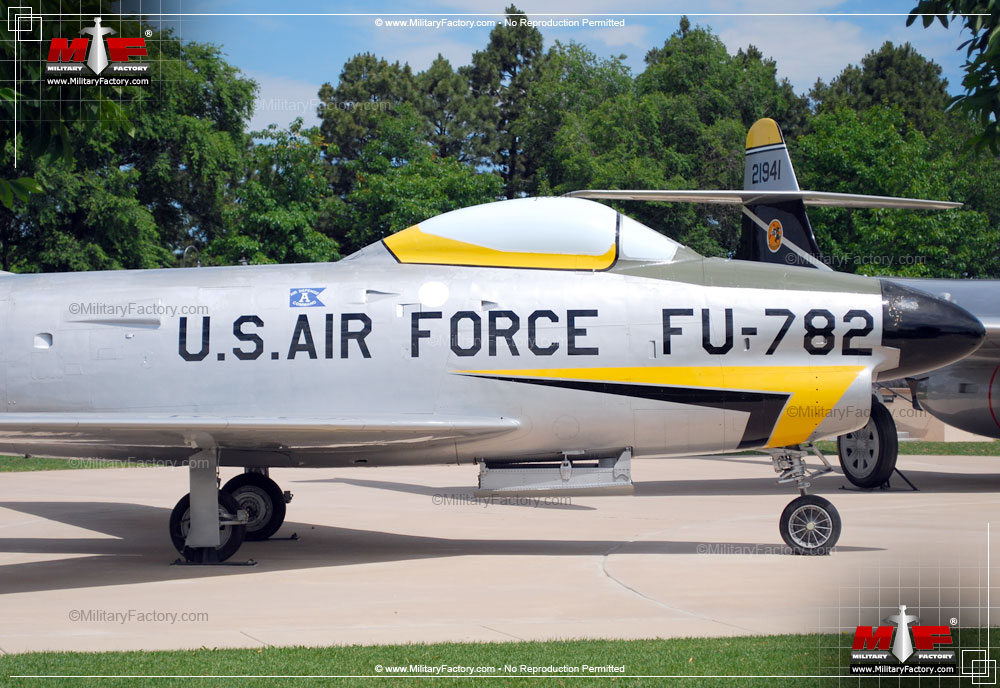 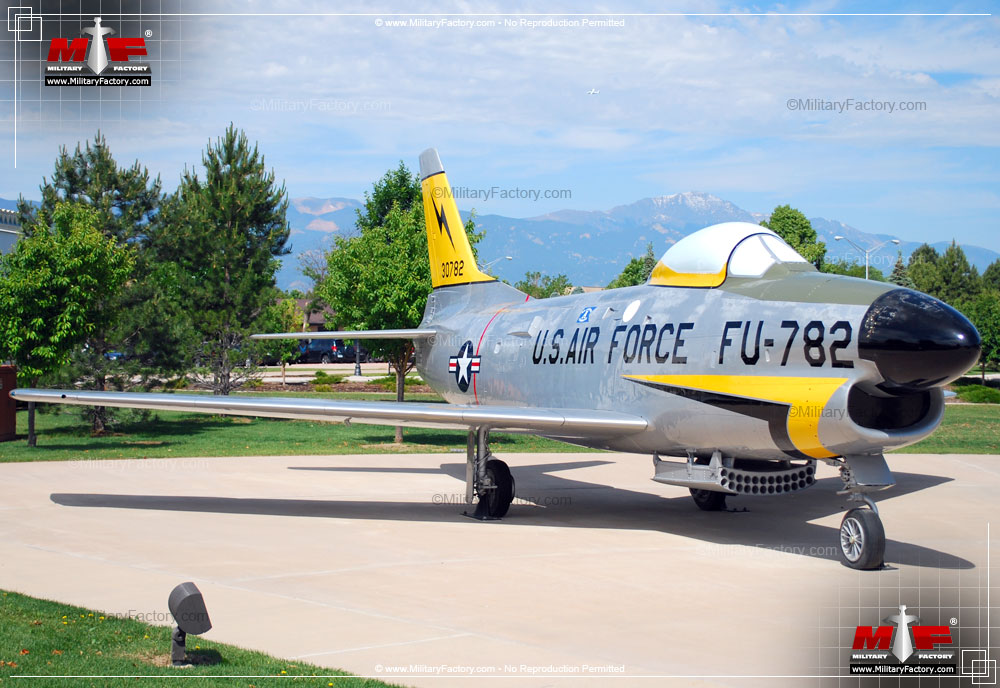 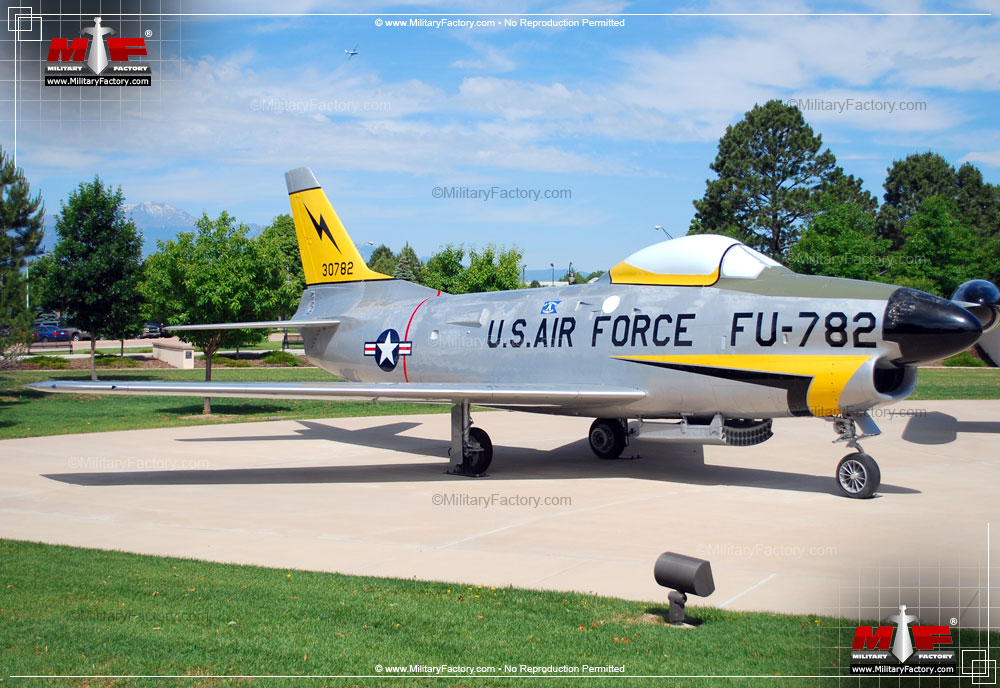 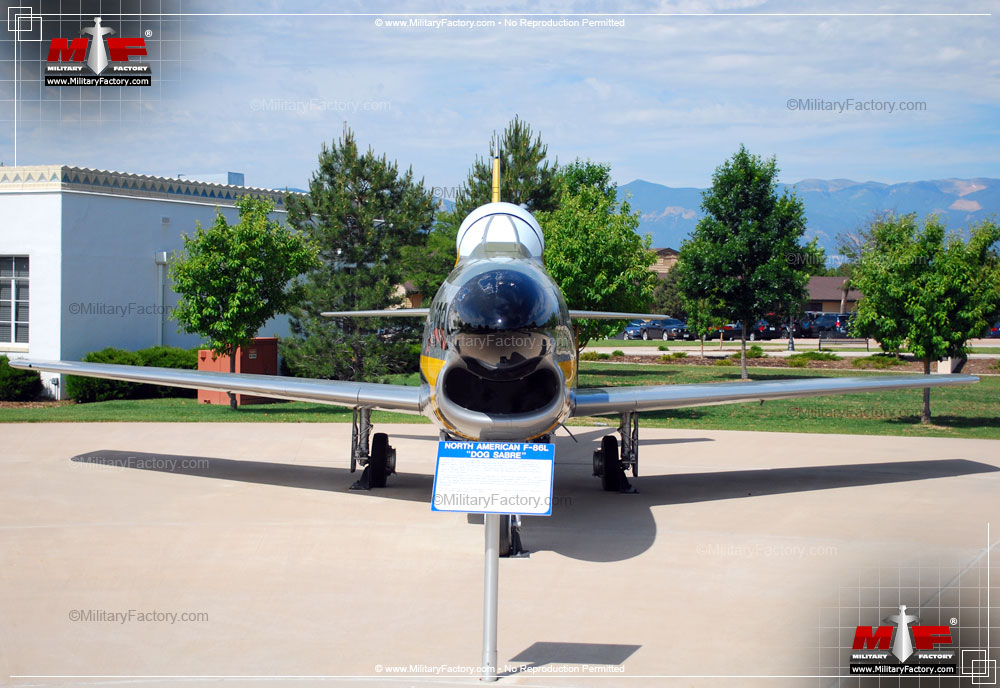 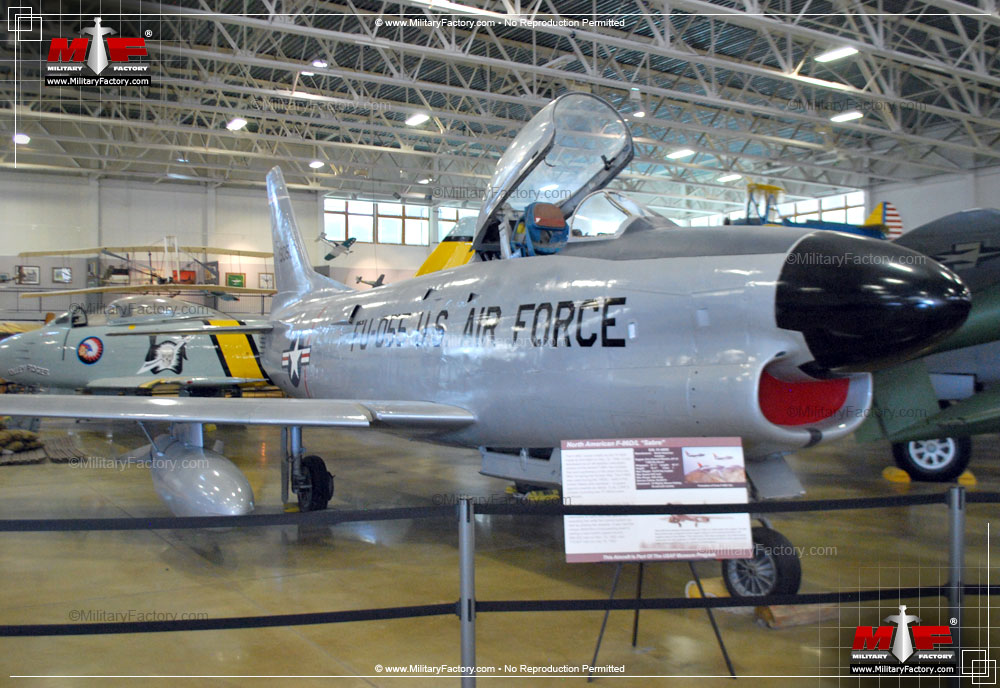 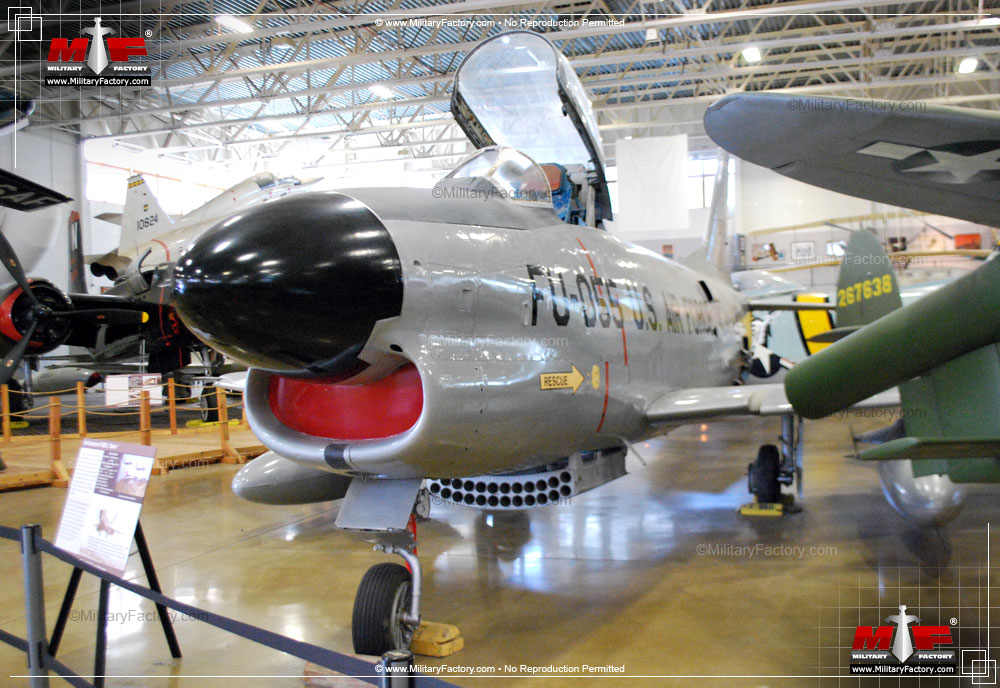