The Hawker P.1121 supersonic interceptor lay in an advanced state when the 1957 Defence White Paper review ended all hopes for it.

Authored By: Staff Writer | Last Edited: 05/07/2019 | Content ©www.MilitaryFactory.com | The following text is exclusive to this site. 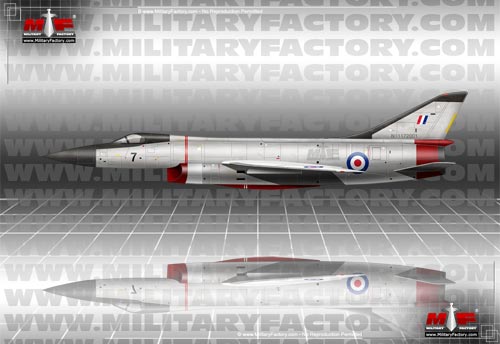 Before the end of the 1950s, there was great interest on the part of the British Royal Air Force (RAF) to acquire an all-new, all-modern Mach 2-capable high-speed, high-altitude, missile-armed, radar-guided interceptor. Again it fell to local industry, long-time and proven players like Hawker Aircraft, to deliver and the responses were well-varied with many holding tremendous potential. One entry became the "P.1121" project which promised that all of the requested capabilities could be met. It was, however, doomed with the arrival of the 1957 "Defence White Paper", a formal review by British officials - namely the Minister of Defence Duncan Sandys - which championed work in the field of guided missiles over that of costly manned aircraft projects. As such, the P.1121 amounted to nothing more than design brochures, design drawings, mockups, and an incomplete prototype.

The P.1121 was actually an evolution of the earlier "P.1103" of 1954, designed around Operational Requirement 323 (O.R.323). This impressive aircraft went through several iterations of its own, earliest forms of February 1954 showcasing low, side-mounted intakes, shoulder-mounted, swept-back mainplanes, and a single tail fin with mid-mounted horizontal plane. The armament was both missile and internal cannon and power was derived from the de Havilland "Gyron" turbojet engine - of which one would be carried and fed by the bifurcated intake arrangement. In addition to this, rocket boosters were to supply the aircraft with the necessary rate-of-climb and straightline performance so critical to interceptor aircraft. Primary armament was centered on 2 x "Red Dean" air-to-air missiles (AAMs).

By March, this same aircraft was exhibiting a completely revised nose section, low-mounted wing mainplanes, wingroot-mounted intakes for the single engine, and relocated tailplanes to the base of the tail fin. The aircraft went through another transformation in early 1955 when Operational Requirement 329 (O.R.329) was released - this specification now calling for Airborne Interception 18 (AI.18) series radar to be fitted.

All this fell to naught for, before the end of April 1956, the aircraft had been passed on by British officials. Regardless, Hawker continued work on the type for the foreseeable future - and it was this base design that spawned other "potentials" like the P.1121 still to come.

The P.1103 was, yet again, evolved now under the consideration that the aircraft could also double in the ground-attack role (with possible inherent nuclear capability to boot) in an effort to finally find favor with the Air Ministry - all the while retaining its interception capabilities. While the two-seat version of this aircraft became the proposed "P.1116", the single-seat offering advanced to become the P.1121.

This elegant proposal, now further detailed as an "Air Superiority Strike Aircraft", carried its radar fit in the nose with the cockpit positioned just aft. The raised dorsal spine, while increasing internal volume, reduced vision to the rear for the pilot. Again a single-engine configuration was used and this was aspirated through a bifurcated duct system - though the intake now lay under at the belly of the aircraft (as in the General Dynamics F-16 "Fighting Falcon" multi-role fighter). The fuselage was largely tubular and the mainplanes mid-mounted along its sides. The mainplanes, positioned at midships, offered elegant sweepback along both the leading and trailing edges and each was given a hardpoint for missile-carrying. The tail was conventional: a single vertical fin being fitted and the horizontal planes being placed well-low against the sides of the fuselage - straddling the exhaust ring of the engine at rear. For ground-running, a standard tricycle arrangement was to be used. Airbrakes were penciled in towards the aft section of the fuselage.©MilitaryFactory.com
Advertisements

The engine of choice became the de Havilland Gyron turbojet series. The initial P.1121 prototype form would carry the PS.26-6 version outputting 17,400lb of dry thrust and up to 23,800lb of thrust with reheat (afterburner) engaged. By the time the aircraft would reach its finalized stage, it was to be powered by the uprated PS.26-3 engine of 20,000lb dry and 27,000lb with reheat. The Rolls-Royce "Conway" engine was also under consideration at this point.

Other design studies of this same aircraft resulted in the addition of rocket boosters for greater performance potential.

As drawn up, the aircraft's overall length was to reach 69 feet while its wingspan measured 37 feet. Gross weight was up to 42,000lb. Beyond the proposed armament of 2 x "Red Top" air-to-air missiles, the aircraft was to also have received provision for supporting up to 50 x 2" RP aerial rockets and carry 2 x 30mm ADEN automatic cannons (internally). Another addition were underwing fuel drop tanks for extended ranges while a nuclear bomb was semi-recessed ventrally.

Hawker engineers estimated their aircraft to have a top speed nearing Mach 2.5, combining the best qualities of a high-performance airframe/propulsion scheme with excellent inherent range and broad support of available British and American aerial weaponry. Rather optimistically, the product was to have been readied by 1960 should all have gone to plan.

However, this did not prove the case for the 1957 defense review doomed projects like the P.1121 despite its rather advanced nature. The review ended the now-redefined OR.339 requirement and, in turn, the P.1121 followed though the project continued under life support into the 1960s. The Hawker concern eventually turned its attention to more advanced aviation projects of which one yielded the famous "Harrier" Vertical Take-Off and Landing (VTOL) attack aircraft - this endeavor born from the work on "P.1127".©MilitaryFactory.com
Note: The above text is EXCLUSIVE to the site www.MilitaryFactory.com. It is the product of many hours of research and work made possible with the help of contributors, veterans, insiders, and topic specialists. If you happen upon this text anywhere else on the internet or in print, please let us know at MilitaryFactory AT gmail DOT com so that we may take appropriate action against the offender / offending site and continue to protect this original work.
Advertisements

(Showcased performance specifications pertain to the Hawker P.1121 production variant. Performance specifications showcased above are subject to environmental factors as well as aircraft configuration. Estimates are made when Real Data not available. Compare this aircraft entry against any other in our database or View aircraft by powerplant type)
PROPOSED:
2 x 30mm ADEN automatic cannons installed internally.
2 x "Red Top" air-to-air missiles (AAMs) at underwing hardpoints (one missile per wing). 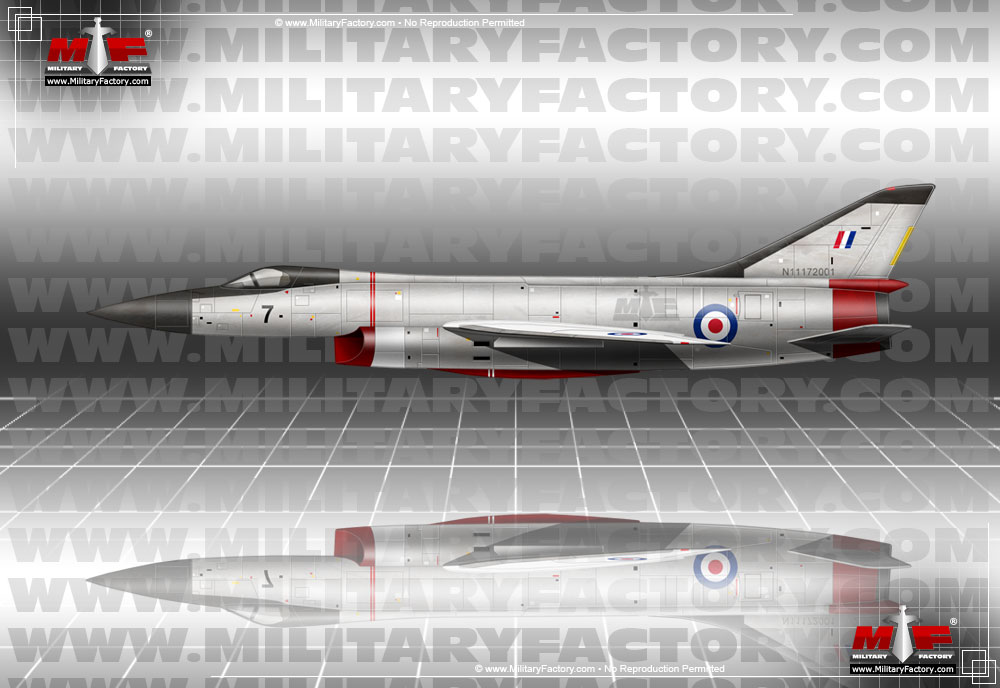