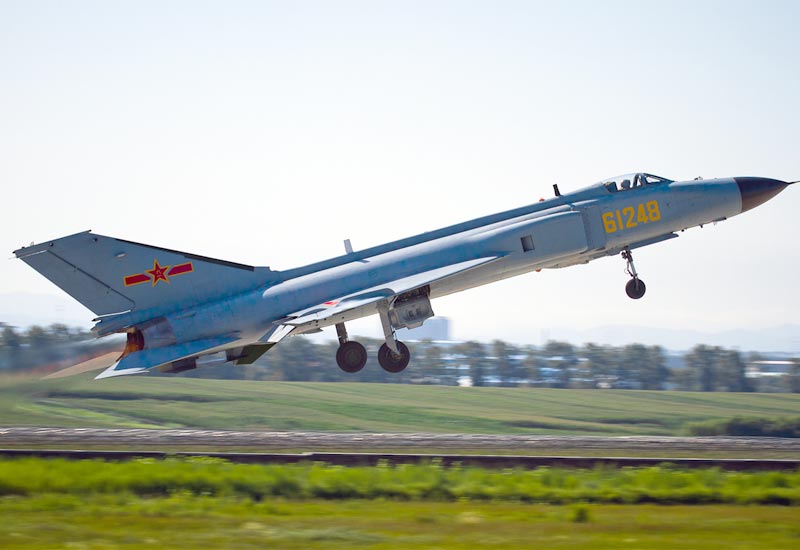 Image from the Russian Ministry of Defense.

J-8 development stumbled through many setbacks, though most of these being political in nature.

Authored By: Staff Writer | Last Edited: 04/27/2020 | Content ©www.MilitaryFactory.com | The following text is exclusive to this site.
The Shenyang J-8 series (NATO codename of "Finback") was an indigenous Chinese multi-role fighter design appearing in 1980. As China was already in the habit of purchasing Soviet equipment during the Cold War years, it was only natural that the design of the "Finback" closely mimic that of past Soviet creations for sheer simplicity in both development and production. The new design took on facets of Soviet-inspired machines such as the Mikoyan-Gurevich MiG-21 "Fishbed" and Sukhoi Su-15 "Flagon" aircraft. It should be noted that the Shenyang-produced Finback was an aircraft whose origins began as far back as the late 1960s, delayed by the upcoming Cultural Revolution in China - along with those local political events that seemingly delay important technological advancements. The "Revolution" would force the Finback project to develop its wings in a slow methodical effort, leaving the aircraft to officially join the ranks of the Chinese Air Force by 1980 - spanning some 10 years of development.

Design was conventional and very similar to past Russian aircraft offerings. The cockpit was situated forward in the long-nosed fuselage fitted with a conical nose cone featuring straight-faced fuselage sides. Intakes for the twin engines were fitted to either side of the body and positioned just aft of the cockpit, affording the pilot a relatively good all-around view. Wings were low monoplane arrangements with extremely sharp angles in much the same design facet that the Mikoyan-Gurevich MiG-21 "Fishbed" utilized. The empennage consisted of a traditional arrangement of elevators along a horizontal plane and a single vertical tail surface over the twin engine exhausts aft. Externally, the J-8 followed the Sukhoi Su-15's external design while much of the internal technology was based on the provided Soviet material as related to the MiG-21. The end product, therefore, held no true surprises when one considers the heavy Soviet involvement and influence in the Chinese design.

Armament was consistent with the J-8's Soviet pedigree and features a variety of short- and medium-range air-to-air missile systems. The addition of a semi-active anti-radar missile no doubt increased the type's potency as did its ability to carry air-to-air rocket and air-to-ground cannon pods for close-in work. Conventional drop bombs are also part of the cleared munitions capabilities that effectively evolved the J-8 series into a multi-role performer. Standard armament was a single 23mm cannon, this naturally based on an original Soviet design.

In active service since 1980, the J-8 series as a whole has since been revamped a number of times to spawn a number of variants. The base J-8 (NATO codename of "Finback-A") was strictly a day fighter whose production totals were extremely limited. The J-8 "Series I" became the first Finback of quantity, seeing some 100 total examples produced and also taking on the name of "Finback-A" in NATO. Series-I Finbacks sported a Sichuan SR-4 series radar system, a one-piece canopy and some minor airframe refinements.
The J-8E became an improved J-8I model while the JZ-8 (or J-8R) was billed as a dedicated reconnaissance platform. The J-8ACT was used as a fly-by-wire developmental model designation.

J-8II ("Finback-B") featured a nose-mounted radar assembly, deleting the MiG-21-style nose-mounted intake in favor of lateral-mounted ones (ala the MiG-23 "Flogger"). The ventral side fitted a folding fin and the canopy was manufactured as a two-piece system. The J-8 IIB was naturally billed as an improved J-8II, also taking on the NATO codename of "Finback-B", and fitting twin WP-13AII turbojet engines and a 23mm Type 23-III series cannon. Again, fly-by-wire developmental models were represented by the J-8II-BW2/J-8IIACT. The J-8 IID sported an in-flight refueling probe.

The "II-series" was well represented on the world market by the inclusion of the export-friendly J-8IIM / F-8IIM based on the J-8B production model. These versions fitted WP13B turbojet engines capable of 15,432lbs of thrust. Other refinements included a Soviet Phazotron Zhuk-8 II pulse Doppler radar system, an updated cockpit and integrated GPS navigation.

Other improved Finbacks appeared in the mold of the J-8IIH, J-8IIF and J-8IIM models, each differing slightly. The J-8III fitted WP-14 engines with improved radar capability, a digital fire-control solution and a revised cockpit (with multi-function displays) and canopy. The F-8 was yet-another series of technology demonstrators, with this model utilizing an integrated digital fly-by-wire control system.

The J-8 series have served under the air force and naval branches of China and it will continue to appear in active service until the new generation of indigenous Chinese multi-role aircraft come online in quantity. At least 325 Finbacks were known to have been produced.

China
(OPERATORS list includes past, present, and future operators when applicable)
✓ Air-to-Air Combat, Fighter
General ability to actively engage other aircraft of similar form and function, typically through guns, missiles, and/or aerial rockets. ✓ Ground Attack (Bombing, Strafing)
Ability to conduct aerial bombing of ground targets by way of (but not limited to) guns, bombs, missiles, rockets, and the like.

(Showcased performance specifications pertain to the Shenyang J-8 II (Finback) production variant. Compare this aircraft entry against any other in our database. View aircraft by powerplant type)
1 x 23mm cannon

Mission-specific armament may include:

(Not all ordnance types may be represented in the showcase above)
Hardpoint Mountings: 7