The Heinkel He 274 was another four-engine entry into the German Luftwaffe Amerika Bomber program - it flew for the French for a brief post-war period.

Authored By: Staff Writer | Last Edited: 03/01/2019 | Content ©www.MilitaryFactory.com | The following text is exclusive to this site. 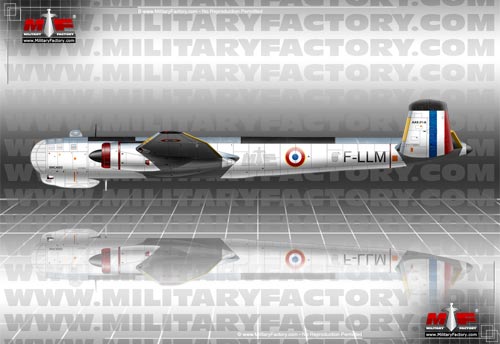 Towards the end of World War 2 (1939-1945), German territory had shrunk by epic proportions and the war had definitively turned against the former conqueror. War industry and infrastructure were being devastated with each passing day as the Allied bombardment of all-things-Axis went on without pause. Much of this daylight bombing initiative was due to the firmly entrenched American involvement in the war which provided the Allies with massed formations of heavy bombers used to obliterate German targets below.

Under this backdrop, the German Luftwaffe was forced to entertain the prospect of a long-ranging, strategically-minded heavy bomber under the project headline of "Amerika Bomber". The program, tentatively started back in 1938 but picking up speed in 1942-1943, called for a bombing platform capable of reaching out 3,600 miles (7,200 ferry) while carrying a considerable bomb load to terrorize American cities along the East Coast - the hope being to disrupt American involvement in Europe.

There were plenty of plans put forth covering such a requirement including Horten's Ho XVIII flying wing, the Focke-Wulf Ta 400, and the Messerschmitt Me 264 (all three detailed elsewhere on this site). Most failed to make any sort of physical impact and many remained simply "paper airplanes". There were also ultimately-abandoned plans to develop a bomber capable of dropping Atomic weapons.

Rather interestingly, the concept of a useful four-engined heavy bomber proved elusive to the Germans throughout the war with only the Focke-Wulf Fw 200 "Condor" being of note. Instead, the air service was forced to do without a competent four-engined "heavy" and rely on fight-bombers, light bombers, heavy fighters, and medium bombers for the attack role. Conversely, on the other side of the English Channel, the Allies accelerated plans towards victory through types like the British Avro "Lancaster" and the American Boeing B-17 "Flying Fortress" and Consolidated B-24 "Liberator" types - all classics in their own right.

The Heinkel He 177 Provides the Start

The resulting He 274 strategic heavy bomber proposal was an outgrowth of Heinkel's continued work on the troublesome He 177 "Griffin" of 1939. The Griffin was a pseudo-four-engined bomber design but it attempted to couple all four engines in just two nacelles at the wings. This pairing ultimately doomed the series to 1,169 examples (a rather low total for a wartime airframe) and the design was notorious for the engines catching fire (they came to be known by the derogatory nickname of "Reich's Lighter" by their own crews!).

The He 177 became the basis for the subsequent He 274 and the fuselage of the He 177A-3 variant was extended for improved controlling/stability with longer-span wing mainplanes added to accommodate four individual engine nacelles. In this guise, the new aircraft was known as "8-274" by the German Air Ministry (RLM) and two prototypes were contracted for with much of the proposed physical work directed at the French concern of Farman (whose facility fell under the control of the Germans). This was to be followed by four pre-production vehicles to be completed by Heinkel workers. Work began in 1943 and continued into 1944 - though it was severely hampered by British and American bombing raids on a seemingly regular basis. The two French prototypes were designated "He 274 V1" and "He 284 V2".

With its extremely slim and cylindrical fuselage, the nose was heavily glazed-over with the tail section tapering and capped by a twin-rudder configuration. The straight-edged mainplanes were set ahead of midships, noticeably tapering towards their tips, and each held leading edge-installed engine nacelles. Power was to be from 4 x Daimler-Benz DB603A 12-cylinder inverted-Vee engines outputting 1,750 horsepower and driving three-bladed propeller units. Estimated empty weight of this large aircraft was 47,000lb while its MTOW peaked at around 84,000lb. Internally the product would be crewed by four - two pilots (of which one doubled as the bombardier), and two dedicated gunners.©MilitaryFactory.com
Advertisements

Self-defensive armament constituted a pair of remotely-operated turrets, one fitted dorsally and the other ventrally, and each was to be armed through 2 x 13mm MG131 machine guns. Additionally, there was a single 13mm MG151 machine gun to be carried in the nose. Due to the bombers expected high-altitude traveling, it was decided to limit gun/cannon armament.

For bombing sorties, the He 174 was rated for up to 8,818lb of internally-held ordnance, this carried in two separate bomb bays along the fuselage.

As flown, the aircraft was able to reach speeds of 360 mile-per-hour and range out to 2,140 miles. Its service ceiling was 47,000 feet, which required pressurization of the crew sections, and rate-of-climb was listed at 780 feet-per-minute.

In July of 1944, the Allies, having gained a foothold in Normandy back in June, were pressing against German territories across Northern France. This forced Heinkel workers to abandon their workspaces even as He 274 V1, the first prototype, was nearing its flying phase. Rather than have this specimen fall into Allied hands, the order was given to destroy it where it lay. However, the initiative rather surprisingly targeted only the engines and little else - the airframe remaining more-or-less intact and ready for collection by the Allies when they arrived. To make matters worse, it seems that there remained a steady supply of engines still to be found around the facility so the future for the He 274, at least in Allied hands, was not so bleak.

Members of the French concern of Ateliers Aeronautiques de Suresnes (AAS) went to work on the prototypes and took the still-intact He 274 airframe to completeness. The aircraft pair was reborn under the local designation of "AAS-1" (also "AAS-01A") and ready to serve the re-established French Air Force in the post-World War 2 period (the war would end in 1945). A first-flight was recorded during December of 1945 with the first prototype and the second (AAS-01B) followed into the air on December 27th, 1947.

In time, AAS was absorbed into SNCASO (Sud-Ouest) and thus the aircraft eventually fell under this better-known/better-remembered association. For the remainder of their flying lives, the pair were limited to strictly high-altitude data-collecting/research work and little else, flying under the banner of the French Air Force. As dedicated bombing platforms it was ruled that the design was largely obsolete by then-modern standards - the turbojet engine was already making its impact. The pair also went on to further several notable French aeronautic projects (principally as "motherships" for air-launching smaller jet-or-rocket-powered subjects) during the post-war period until ultimately scrapped in 1953.©MilitaryFactory.com
Note: The above text is EXCLUSIVE to the site www.MilitaryFactory.com. It is the product of many hours of research and work made possible with the help of contributors, veterans, insiders, and topic specialists. If you happen upon this text anywhere else on the internet or in print, please let us know at MilitaryFactory AT gmail DOT com so that we may take appropriate action against the offender / offending site and continue to protect this original work.
Advertisements 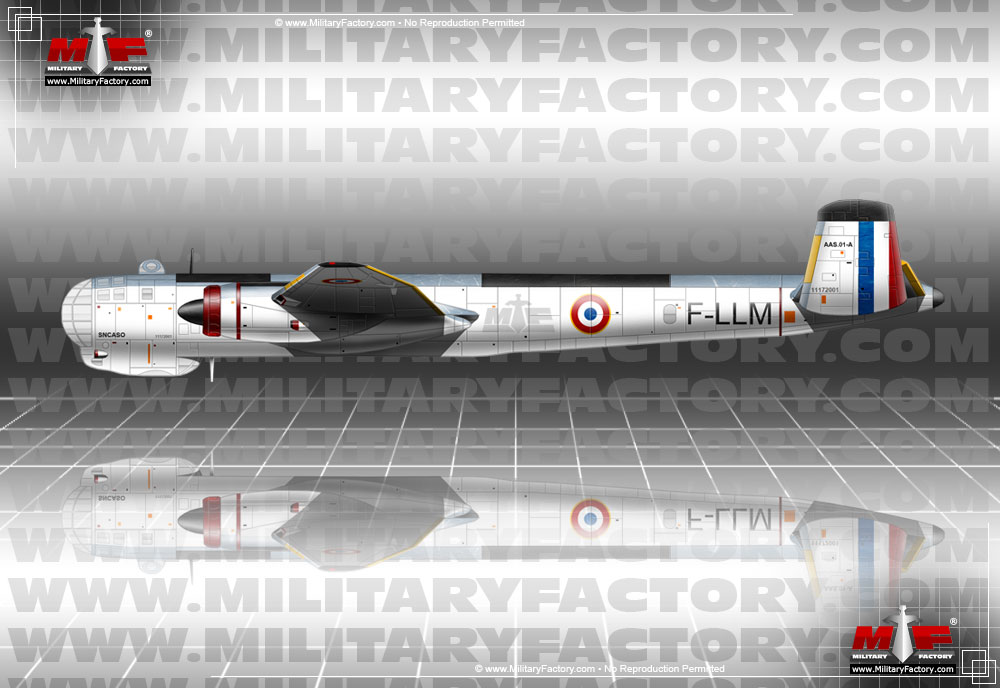