SNCASO of France worked on four versions of its SO.6020 jet-powered prototype - none advanced.

Authored By: Staff Writer | Last Edited: 02/20/2019 | Content ©www.MilitaryFactory.com | The following text is exclusive to this site. 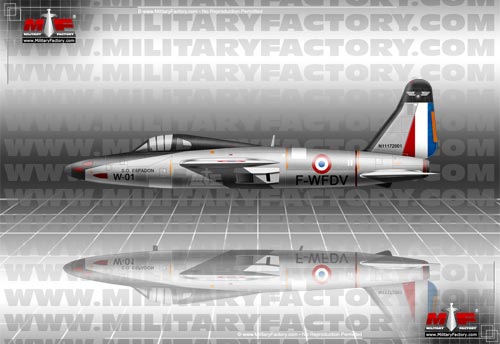 The rebuilding French aero-industry went right to work following the close of World War 2 (1939-1945). In March of 1946, the recovering French Air Force (Armee de l'Air) drew up a request for an all-new, all-modern "assault fighter interceptor". The requirement called for, among other qualities, a speed of at least 560 miles-per-hour speeds under jet power, cockpit armoring to protect from hits up to heavy small arms fire, and an armament load out of 6 x 20mm autocannons as standard armament. By this time in history, the French, like other powers around the world, has some time to actively study the German wartime Messerschmitt Me 262 (Schwalbe) jet-powered fighter. As the jet age had dawned, turbojet jet-powered forms were the way of the future regarding military warplanes.

SNCASO, founded in the per-war period during 1936, was handed the development contract to cover three prototypes for such an aircraft on June 28th, 1946. A first-batch of 230 aircraft were planned following the conclusion of successful flight-testing under various conditions. Hundreds more would eventually stock the French Air Force fleet before the end.

The original propulsion scheme was to involve the all-French Rateau SRA-101 turbojet - a powerplant amazingly designed and developed in occupied France during the war. The engine was tested in September of 1946 and increased in power by 1947. However, its low output meant that the project went nowhere and was eventually abandoned come 1948. After this, it was decided to go with the much advanced, and proven, British Rolls-Royce "Nene" Series 100 turbojet of 5,000lb thrust being built locally by Hispano-Suiza.

The SNCASO product became the SO.6020 "Espadon" (meaning "Swordfish"). It carried a clean design look with mid-mounted mainplanes along an elegantly-shaped fuselage and the tail was made up of a conventional arrangement incorporating low-mounted planes and a single vertical fin. The mainplanes were straight-edged with rounded tips - fitted at the exact midway point of the fuselage. There was little sweep along the leading edges but noticeable sweep at the trailing edges. The nose section was long and bullet-shaped, set to house the collection of autocannons ahead of the pilot. The cockpit was lightly framed and positioned ahead of midships with a raised dorsal spine section aft. The pilot would control his aircraft through a column-mounted yoke. All pertinent operating dials would be positioned along the forward instrument panel as usual. To aspirate the single engine installation, semi-circle side-mounted intakes would be used (as opposed to a nose-mounted intake popular in the day). For ground-running, a tricycle undercarriage (retractable was used). The legs were short so as to retract cleanly into the design but this also gave the aircraft a low stance when on the ground.

As in the requirement, the armament would consist of 6 x 20mm autocannons fitted as three guns per side of the nose. Alternatively, the aircraft could sport 2 x 30mm DEFA cannons for more inherent firepower. The design decision to go with side-mounted intakes was deliberate - clearing the nose section to concentrate all of the primary armament there. In addition to this, the nose was already being planned to carry intercept radar (which was never fitted to any of the flyable SO.6020 forms).

The first prototype of the series became SO.6020-1 and a planned first-flight was set for March of 1948 - however this specimen did not record this action until November 12th, 1948 due to equipment delays. This aircraft tested adequately enough even without its planned cockpit pressurization system and armament in place but did not impress on the whole due to a lack of power - rate-of-climb was a considerable failing, particularly for a fighter intended to intercept incoming bandits. The project suffered a serious setback on December 1st, 1949 when a power failure forced a belly-landing to be had. This example would later be fitted with Turbomeca "Marbore" turbojets at the wing tips.

The SO.6020-1 had an overall length of 49 feet, 2.5 inches with a wingspan of 34 feet. Gross weight reached 17,778lb. The sole Nene engine supplied 5,000lb of thrust exhausting through the jetpipe at the base of the rudder fin at rear.

SO.6020-2 was the second prototype of the line and this time was used to incorporate beneficial changes to the design from lessons learned in flying the first protoype. Again, the first flight of this form was delayed from August 1948 until September 16th, 1949. Despite the introduction of flush-mounted intakes, power proved elusive and this specimen went on to become the test article "SO.2026" to evaluate rocket motors (SEPR-25 and SEPR-251). A first-flight of the modified aircraft took place on January 4th, 1952.

SO.6020-3 was brought along as the third contracted prototype and base highly in Prototype 1. As it was intended to showcase a reconnaissance-minded production form, the SO.6020-3 was given a camera-equipped nose for the role. However, it never flew with this assembly for it was modified to become "SO.6025" and, like the SO.6020.2 before it, the SO.6020-3/SO.6025 carried the SEPR-25 auxiliary rocket motor for additional, albeit temporary thrust.

Proposed production interceptors based in the SO.2030-3 design would carry the designation of "SO.6021". To finalize this design, begun in 1947, the aircraft would be given a lighter structure to reduce operating weights, have its wing enlarged for improved stability, feature hydraulic-assisted controls, and seat the pilot in a life-saving ejection seat. All other qualities of the SO.2030-3 were retained. This form was eventually built and flown, for the first time, on June 3rd, 1950. As with other aircraft of the Espadon series, SO.6021 did not proceed and ended its days as a test bed for various engine fits.

To extract something from this project, SNCASO engineers drew up working plans for a 18,408lb ground-attack version of this fighting platform. As is usual for low-level flying aircraft, this model would be armored at the critical positions, carry powerful cannon armament (2 x 30mm HS.603) with support for aerial rockets (SERAM T-10) to attack ground targets with, and fit the Rolls-Royce "Tay" engine of 7,715lb thrust - and afterburning type - over the original Nene. Nothing came of this venture.

All work on the Espadon aircraft design appears to have ended in mid-1951.©MilitaryFactory.com
Note: The above text is EXCLUSIVE to the site www.MilitaryFactory.com. It is the product of many hours of research and work made possible with the help of contributors, veterans, insiders, and topic specialists. If you happen upon this text anywhere else on the internet or in print, please let us know at MilitaryFactory AT gmail DOT com so that we may take appropriate action against the offender / offending site and continue to protect this original work.
Advertisements

(Showcased performance specifications pertain to the base SNCASO SO.6020 Espadon production variant. Performance specifications showcased above are subject to environmental factors as well as aircraft configuration. Estimates are made when Real Data not available. Compare this aircraft entry against any other in our database or View aircraft by powerplant type)
PROPOSED:
6 x 20mm Autocannons in nose (three per fuselage side).

(Not all ordnance types may be represented in the showcase above)
Hardpoint Mountings: 10

General Assessment
Firepower
Performance
Survivability
Versatility
Impact
Values are derrived from a variety of categories related to the design, overall function, and historical influence of this aircraft in aviation history.
Overall Rating
The overall rating takes into account over 60 individual factors related to this aircraft entry.
70
Rating is out of a possible 100 points.
Relative Maximum Speed
Hi: 750mph
Lo: 375mph
This entry's maximum listed speed (601mph). 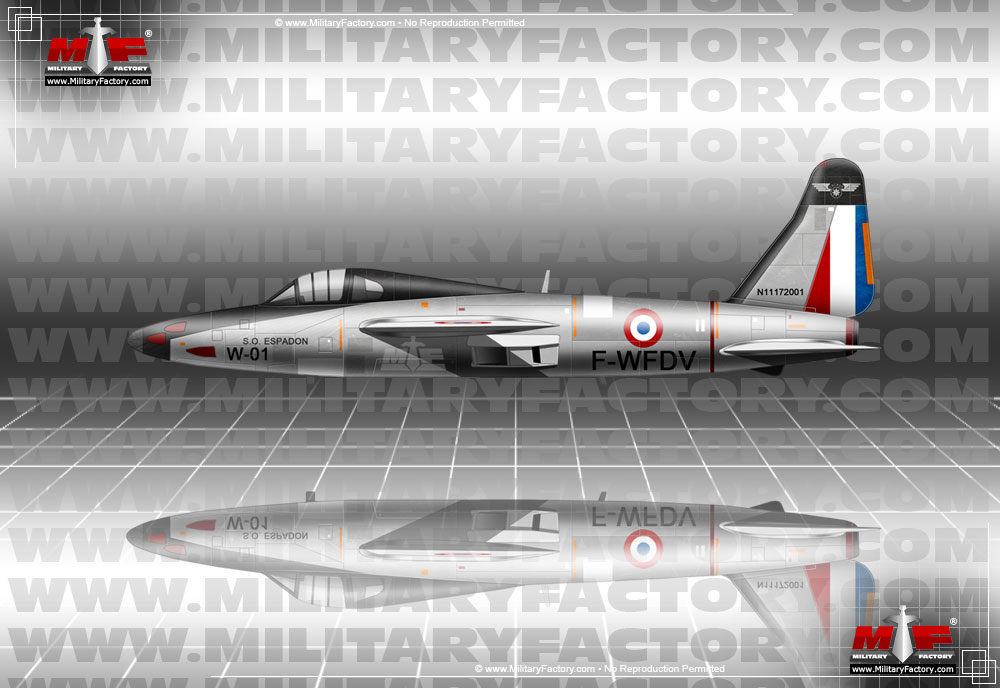