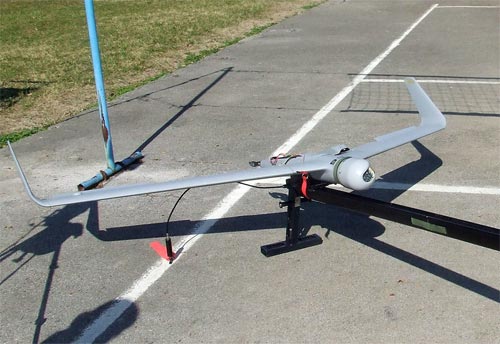 The Unmanned Air System (UAS) industry continues its explosive growth in the defense sector led by such concerns as Aeronautics Systems of Israel. The company produces a complete line up of UAS types to cover a myriad of military, security, and peacetime roles. Its marquee product is the "Orbiter" which has seen extensive adoption around the globe with operators ranging from Azerbaijan and Finland to the United Kingdom and the United States.

This aircraft has a wingspan of 3 meters with an MTOW nearing 10.3kg while a mission payload of up to 1.5kg is supported). Payload types include a stabilized Electro-Optical (EO) camera arrangement for daytime operation, a FLIR setup for low-light/night time level flights, "dual day and night" configuration (stabilized EO camera), and High-Definition (HD) receiving capabilities for terrain mapping and modeling.

Flight operation of the aircraft are conducted through an electric drive powering a two-bladed propeller at the rear of the slim fuselage in "pusher" configuration, the system reaching speeds of 70 kts while range (by Line-of-Sight datalink) is up to 100 km. Automatic waypoint hunting is supported and a mission endurance window up to 4 hours is reported. Only wing mainplanes are used in the aircraft's design (the aircraft lacks traditional tail surfaces) and these are swept back with upturned tips.

The platform has a dual-payload capability to cover operations in both day and night light levels and can be readied in as little as seven minutes while featuring an automatic take-off and recovery process by way of pneumatic catapult and airbag-parachute, respectively.

The Orbiter 3 is billed as a "Small Tactical UAV" (STUAV) built on compactness and lightweight. It fits its optics set in the nose (at the chin position) and has a similar two-bladed pusher prop arrangement at the rear of a slim fuselage. The wing mainplanes are blended well into the body (fuselage) but this entry of the Orbiter has down-turned tips as well as the addition of foreplanes near the nose. Like other entries of the series, it can be used in day-night environments and over land or water (maritime).

The optics set is fully-stabilized and includes day, night, FLIR (Forward-Looking InfraRed), and laser designation functionality. A zoom feature provides strong details of the target/target area. The aircraft can be used to satisfy an over-battlefield SIGnals INTelligence (SIGINT) role as need be.

Structurally, the vehicle's wing span reaches 4 meters and the mission payload increased to 5.5kg with an MTOW of 40 kilograms listed. Maximum speed is 70 knots and range via datalink is up to 150 kilometers. Take-off is by catapult with recovery by way of netting.©MilitaryFactory.com
Advertisements

The Orbiter 4 is marketed towards various unique industries including Exclusive Economic Zone (EEZ) enforcement, target direction, and artillery-spotting and includes many of the capabilities proven through the 3-series model. It features swept-back mainplanes with down-turned tips and foreplanes as in the 3-series UAS. More advanced avionics, ground control support, and communications as integrated into this upgraded form for broader tactical applications. Wingspan reaches 5.4 meters while the MTOW is 50 kilograms and the mission payload increases to 12kg. The datalink gives an LoS range out to 150 kilometers and the vehicle's service ceiling reaches up to 18,000 feet. Endurance is up to 24 hours of flight time.

Greater range and payload capabilities means enhanced versatility for covering a myriad of over-battlefield roles. A three-man team is dedicated to the operation of this model.

The Orbiter 1K has been developed as a "multi-mission" type UAS with a secondary capability as an expendable munitions platform with enhanced loitering times. It sports the same body and wing shape of previous Orbiter iterations (though this form has upturned wingtips). The aircraft can be used as a precise targeted munitions system and comes completed with a video-based tracker, digital communications suite, and variable camera/explosive payload options. Launching is by way of catapult with recovery by airbag/parachute or netting.

The Orbiter 1K is based in the original Orbiter 2 production model.

The Azerbaijani Army uses the Orbiter and the country has established local production facilities to support it. Other armies fielding the vehicle are Finland, Ireland, Peru, Poland (including special forces), Serbia, South Africa, and Spain. Israeli Sea Corps, Mexican Federal Police, the Royal Thai Air Force are all known operators of the type. The series has also been evaluated by the United Kingdom and the United States, the former which has ordered three units.©MilitaryFactory.com
Note: The above text is EXCLUSIVE to the site www.MilitaryFactory.com. It is the product of many hours of research and work made possible with the help of contributors, veterans, insiders, and topic specialists. If you happen upon this text anywhere else on the internet or in print, please let us know at MilitaryFactory AT gmail DOT com so that we may take appropriate action against the offender / offending site and continue to protect this original work.

January 2019 - The Israeli state-owned concern of Rafael is seeking to purchase Aeronautics Defense, a publicly-run, UAV-centered company within Israel.

October 2020 - Azerbaijan has been using its fleet of Orbiter surveillance drones in its war against neighboring Armenia. The vehicles are produced locally and currently number 10 units.

(Showcased performance specifications pertain to the Aeronautics Group Orbiter 2 production variant. Performance specifications showcased above are subject to environmental factors as well as aircraft configuration. Estimates are made when Real Data not available. Compare this aircraft entry against any other in our database or View aircraft by powerplant type)
None. Orbiter 2/II payload up to 1.5 kilograms consisting of mission equipment related to the ISR role. 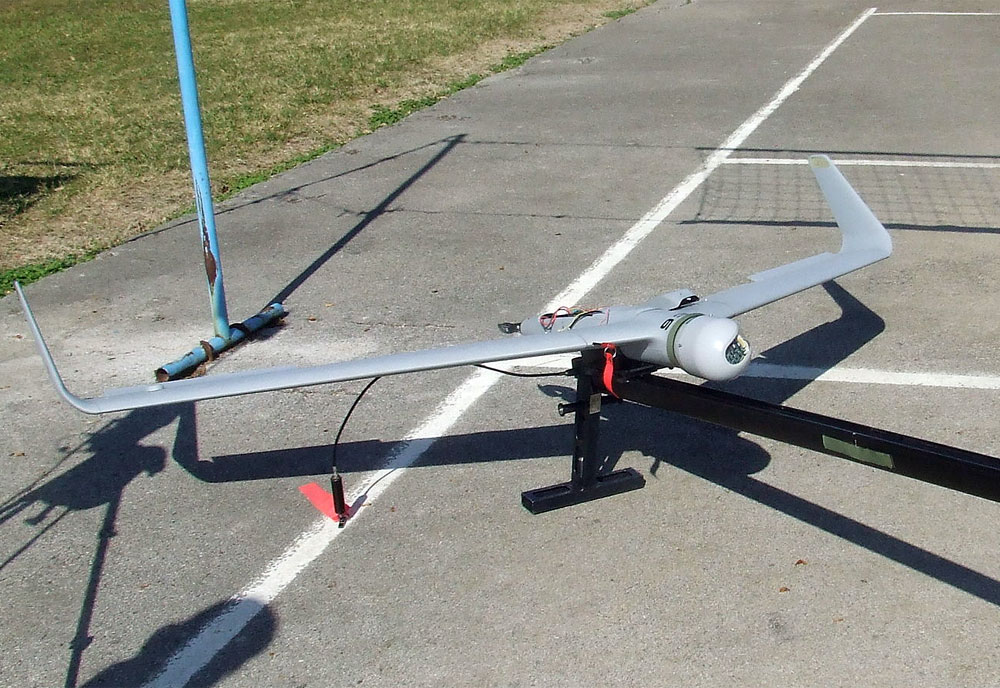