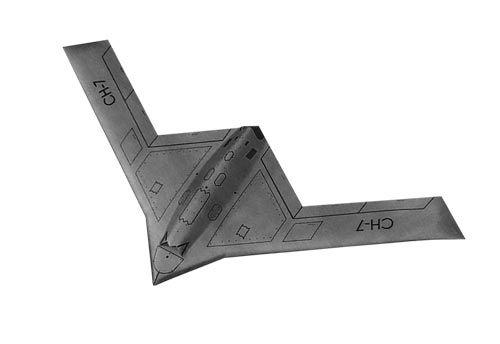 At Zhuhai Air Show 2018, CASC ("Chinese Aerospace Science and Technology Corporation") unveiled a subscale model of its in-development "CH-7" stealth combat drone with a focus on direct-attack of enemy Airborne Early Warning & Control (AEW&C/AWACS) platforms at range through internally-held missiles. The aircraft is a private-venture initiative by the company, who is primarily associated with Chinese space endeavors, and represents a significant evolution of Chinese UAV prowess, particularly concerning flying-wing design as this type of aircraft typically presents a slew of aerodynamic and control challenges for engineers.

The CH-7 certainly shares an appearance akin to several Western all-wing UAV designs, namely the Northrop Grumman X-47B carrier-based drone (detailed elsewhere on this site). The air vehicle sports a "cranked-kite" shape an uses no vertical planes of any kind. It is assumed to carry a single turbofan engine of unknown, model , and output buried within the center-section of the fuselage. Aspiration for this unit is through a dorsal-mounted opening and exhaust is through a port at the rear of the fuselage. A retractable tricycle undercarriage is used for ground-running. Despite its advertised "stealthiness", the aircraft will rely more on onboard equipment to achieve invisibility as opposed to specialized design and skin coatings. Structurally, the CH-7 has an overall length of 33 feet, a wingspan measuring 72 feet, and a gross weight in the 28,500lb range. A selection of powerplant has not yet taken place (2018).

In the Chinese scenario, this stealth aircraft would be able to penetrate enemy airspace unmolested and engage opposing AWACS platforms by launching Anti-Radiation Missiles (ARMs) at the target. Several CH-7s could also work in conjunction to designate targets or surveillance / reconnaissance sorties (by replacing the armament load out with specialized mission equipment). Beyond this, the CH-7 would have the same capability to engage ground-based radar facilities with equal lethality. The UAV would also have secure inter-formation communications to provide data and target information to accompanying manned aircraft carrying more considerable war loads. Other sortie types for this vehicle would also include anti-ship and delivery of precision-guided drop bombs.

A flyable prototype is hoped for as early as 2020-2021 with extensive flight-testing to follow throughout the next decade. Serial production is rather optimistically planned for 2022 with the potential for export sales as well. The general nonrestrictive approach of Chinese technology places China at the head of a potentially lucrative global UAV market in the coming decade - one in which the United States and Israel generally dominate but restrict sales to certain parts of the world and certain customers (mainly the Middle East).

Some of the structural measurements and performance specifications found on this page are estimated on the part of the author.©MilitaryFactory.com
Note: The above text is EXCLUSIVE to the site www.MilitaryFactory.com. It is the product of many hours of research and work made possible with the help of contributors, veterans, insiders, and topic specialists. If you happen upon this text anywhere else on the internet or in print, please let us know at MilitaryFactory AT gmail DOT com so that we may take appropriate action against the offender / offending site and continue to protect this original work.

November 2018 - CASC displayed a flyable version of its CH-7 at the Zhuhai Air Show.

(Showcased performance specifications pertain to the base CASC CH-7 production variant. Performance specifications showcased above are subject to environmental factors as well as aircraft configuration. Estimates are made when Real Data not available. Compare this aircraft entry against any other in our database or View aircraft by powerplant type)
Mission payload of up to 4,000lb stated. Assumed support for Air-to-Surface Missiles (ASMs) (including anti-radiation missiles) as well as precision-guided bombs and conventional drop munitions held in an internal bay.

(Not all ordnance types may be represented in the showcase above)
CH-7 - Base Series Designation. 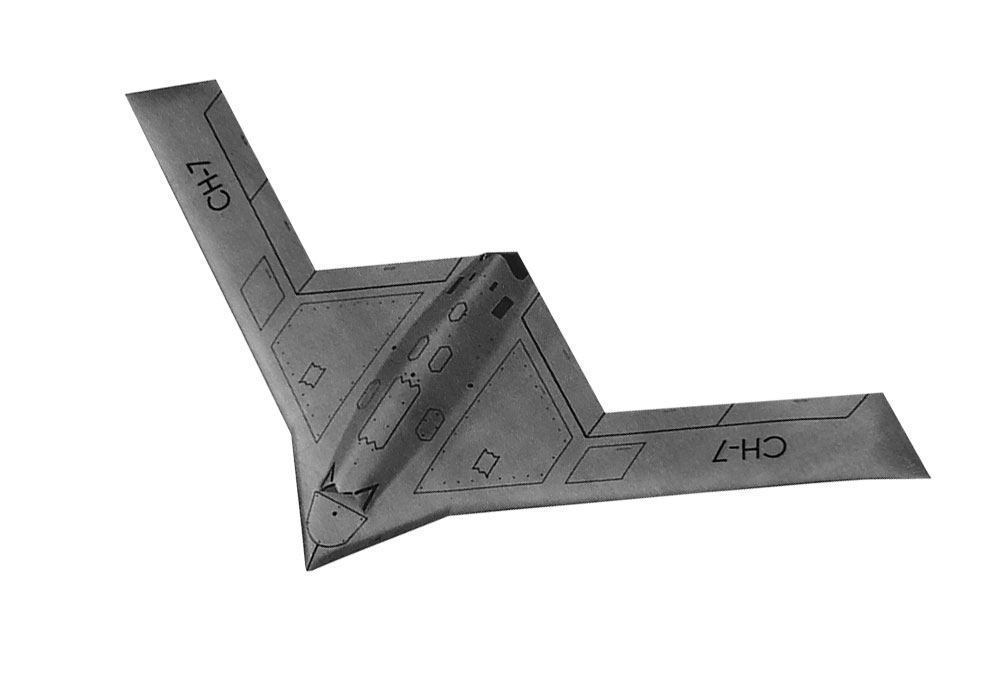