The Tempest was unveiled at Farnborough 2018 as a look into what a future British 6th Generation Fighter might look like.

Authored By: Staff Writer | Last Edited: 07/19/2022 | Content ©www.MilitaryFactory.com | The following text is exclusive to this site. 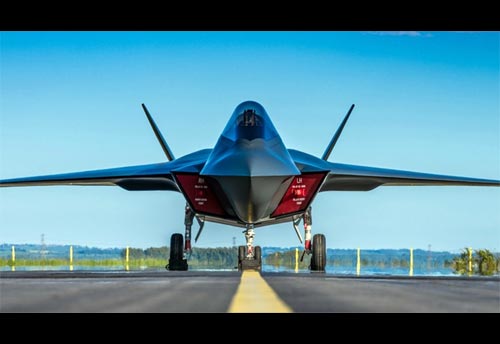 To keep up with the changing demands of aerial warfare, the British have announced a commitment to the development of an all-new 6th Generation Fighter as showcased by the unveiling of the "Tempest" air superiority fighter concept at Farnborough 2018. The aircraft is the embodiment of what the next frontline fighter of the Royal Air Force (RAF) could look like as the service will eventually be forced to seek a successor to its fleet of Eurofighter Typhoons in the next two decades. As it stands, the Tempest remains a concept form at its core.

The aircraft is being developed under the initiative name of "Future Combat Air System" - or FCAS.

The current air superiority standard remains the 4th Generation Fighter - proven, economical, and granted access to a plethora of weapon options across the globe. High-profile types (like the Russian Sukhoi "Flanker" series) have received various modernizations and upgrades to graduate to the 4.5th Generation Fighter status. The Lockheed F-22 Raptor, introduced in 2005, marked the beginning of the stealth-minded "5th Generation Fighter" trend which has since been mimicked to an extent by the powers of Russia and China. Other 5th Generation Fighter programs are only starting to take shape - namely in South Korea, Turkey, Japan, and India. Only a few select powers, like the United States and Russia, have already started to look to the far-future by delving into a 6th Generation Fighter concept.

As it stands, the Tempest design features a shape and lines similar to the F-22 before it. The fighter would carry a pair of engines in a typical side-by-side arrangement well-aft of the cockpit. The "new generation" engines, that is, of all-new design and construction, would provide the necessary power and performance as well as increases survivability of both pilot and aircraft over contested airspaces. A delta-wing shape is featured and the airframe carries the usual low-observable traits such as smooth contours, chined edges, and few protrusions. Vertical tailplanes are outward canted and engine intakes are slanted and of rectangular shape. A single-piece, specially-coated canopy sits over the cockpit which, in turn, sits over the radar-housing nose of the aircraft. A conventional tricycle undercarriage is used for ground-running.

It is assumed that a fighter like the Tempest would equipped with internal weapons bays - dubbed the "flexible payload bay" - to house its ordnance loads (as is the case with the F-22). Key contributors to the this section of the program are missile-developer MBDA and Harris Release Systems. The option for external loads would most likely remain in play as in the F-22. There is planned support for a new-generation of weaponry in the form of hypersonic missiles, direct-energy types, swarming ordnance, and even the carrying/air-launching of UAVs to supply the warfighter with a futuristic edge in any firefight.

Development of the fighter will be both of the private venture and governmental variety. Of course such a venture is set to be a very expensive one as showcased by the F-35 project in the United States, forcing the British to work with foreign players at the international level - candidates such as France or Germany or both. France and Germany have already agreed to a joint fighter development program all their own - the hope being that one fighter could be developed for most of the European powers to use, and something to compete directly with the F-22 and F-35 programs "across the pond". The main challenge to the British endeavor is settling on a program that will deliver key qualities to its Royal Air Force (RAF) which may generate requirements apart from what the French and Germans are seeking. It is notable too that the Franco-German program has announced a less-aggressive in-service target date of 2040. The British are also expecting to meet with the Americans to discuss their ongoing Next Generation Air Dominance and Penetrating Counter-Air program so little in regards to the Tempest has been settled.

Other possible national partners may include India, Turkey, and Saudi Arabia where smaller programs, pushed by British aero-industry, have either matured or just begun, giving these nations a taste - and critical experience - in the development and production of combat platforms.

A procurement contract is scheduled for sometime in 2025 while the proposed in-service introductory date for the Tempest is during 2035 at which point the British fleet of Lockheed F-35 Lightning II strike fighters would have had a considerable period to mature (deliveries of this platform are ramping up as of this writing, 2018). The RAF plans to procure some 138 examples of the F-35 - a grand financial commitment in itself - which leaves some doubt in the viability of the British commitment to a costly and complex future 6th Generation Fighter.

Specifications listed on this page are estimates on the part of the author.©MilitaryFactory.com
Note: The above text is EXCLUSIVE to the site www.MilitaryFactory.com. It is the product of many hours of research and work made possible with the help of contributors, veterans, insiders, and topic specialists. If you happen upon this text anywhere else on the internet or in print, please let us know at MilitaryFactory AT gmail DOT com so that we may take appropriate action against the offender / offending site and continue to protect this original work.

November 2018 - Saab of Sweden is under consideration for being invited to the FCAS program.

December 2018 - "Team Tempest" is currently made up of BAe Systems, MBDA of France, Leonardo of Italy, Rolls-Royce, the Royal Air Force (RAF), and the British Ministry of Defence (MOD).

February 2019 - Saab of Sweden has formally emerged as a potential partner in the British-led Tempest FCAS initiative.

September 2019 - Missile-maker MBDA is said to have begun design studies on possible new short-ranged air-to-air missile weapons that may be featured in the upcoming Tempest FCAS.

September 2019 - Italy has been announced as the third nation (after Sweden) to formally support the British-led Tempest FCAS project for a new European air dominance fighter of the next generation. A declaration of intent was signed in a meeting on September 10th, 2019.

March 2020 - Japan has emerged as a potential partner in the Tempest FCAS program.

August 2020 - A windtunnel model of the Tempest FCAS has been showcased unveiling additional details to its overall design. Engineers relied on digital 3D printing to bring the form to fruition.

July 2022 - The Tempest prototype is expected to achieve a first-flight within the next five years.

(Showcased performance specifications pertain to the base BAe Systems Tempest FCAS production variant. Performance specifications showcased above are subject to environmental factors as well as aircraft configuration. Estimates are made when Real Data not available. Compare this aircraft entry against any other in our database or View aircraft by powerplant type)
Assumed the usual supply of air-to-air missiles, air-to-surface missiles, precision / laser-guided munitions, and jettisonable fuel stores held in internal bays as well as external hardpoints. Also planned support for direct-energy, hypersonic, and swarm weapons and UAV-launching. 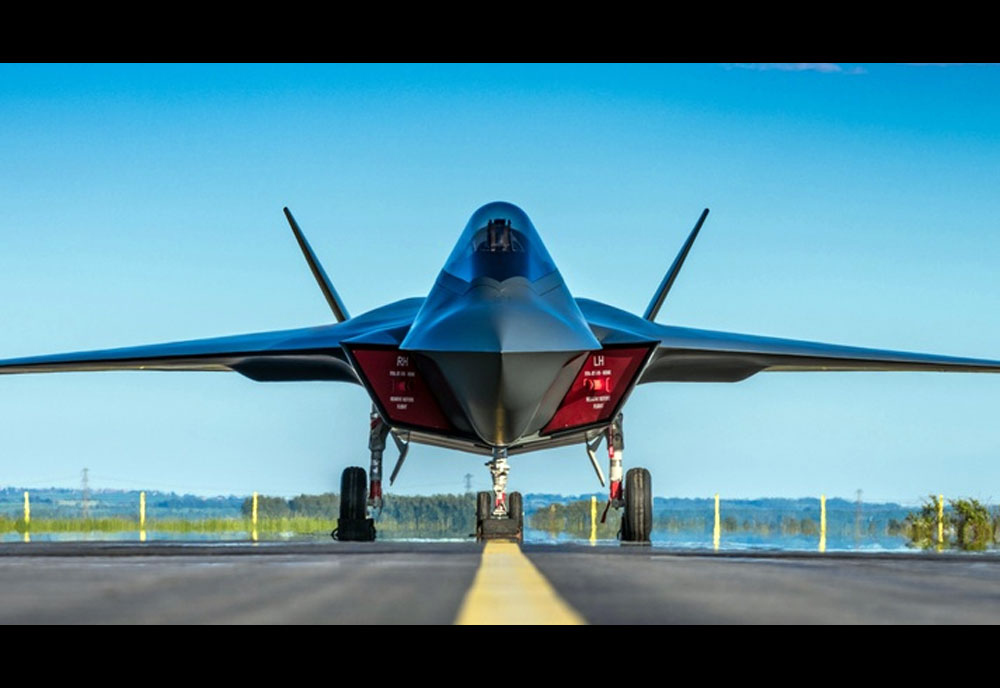 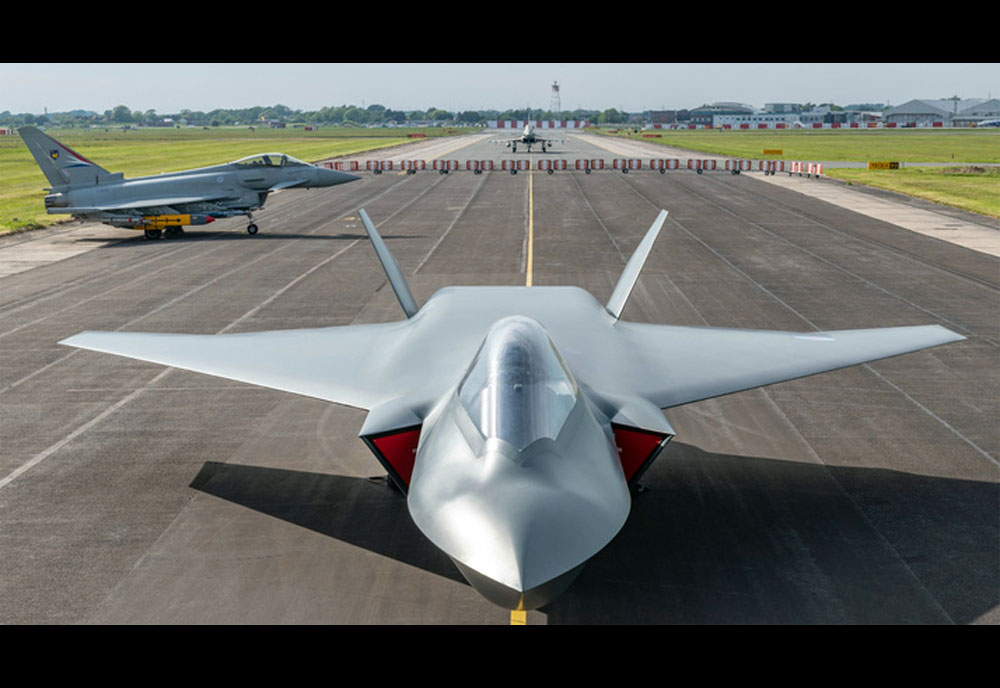 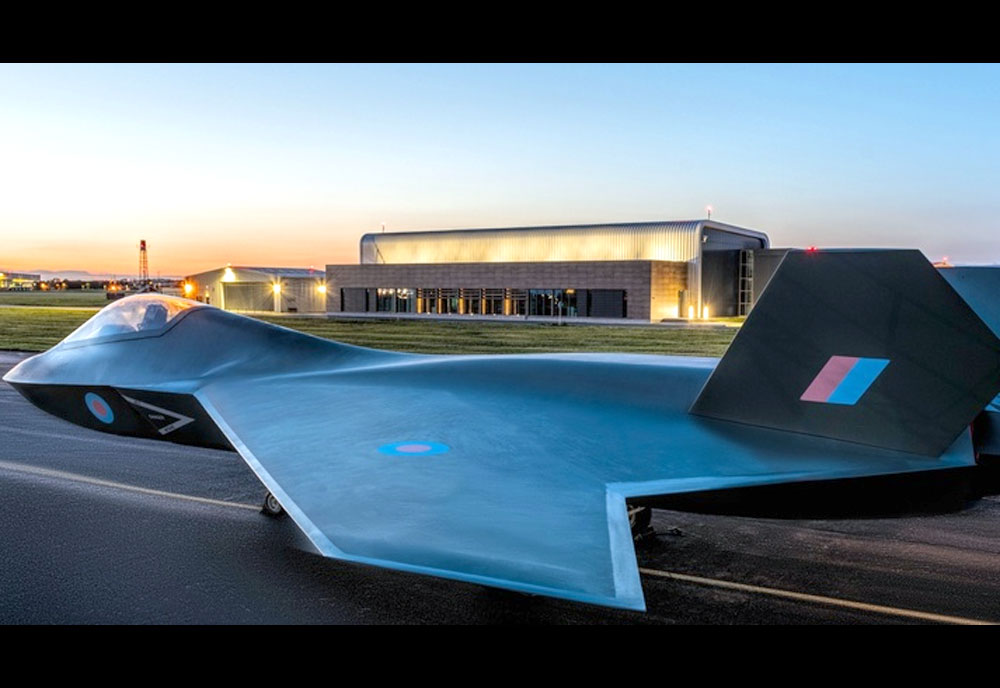 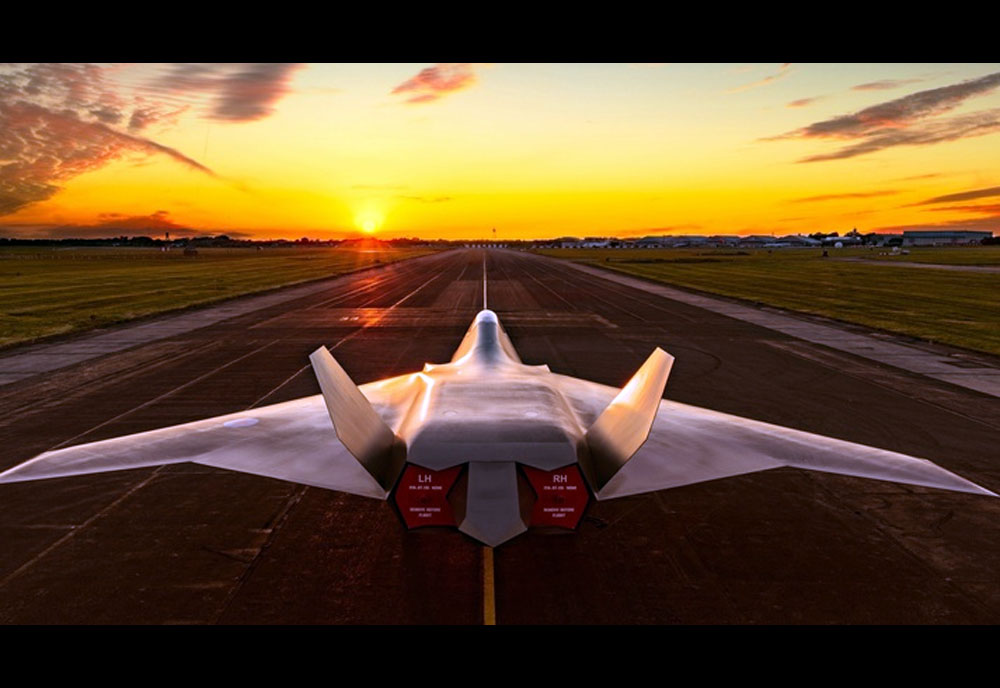 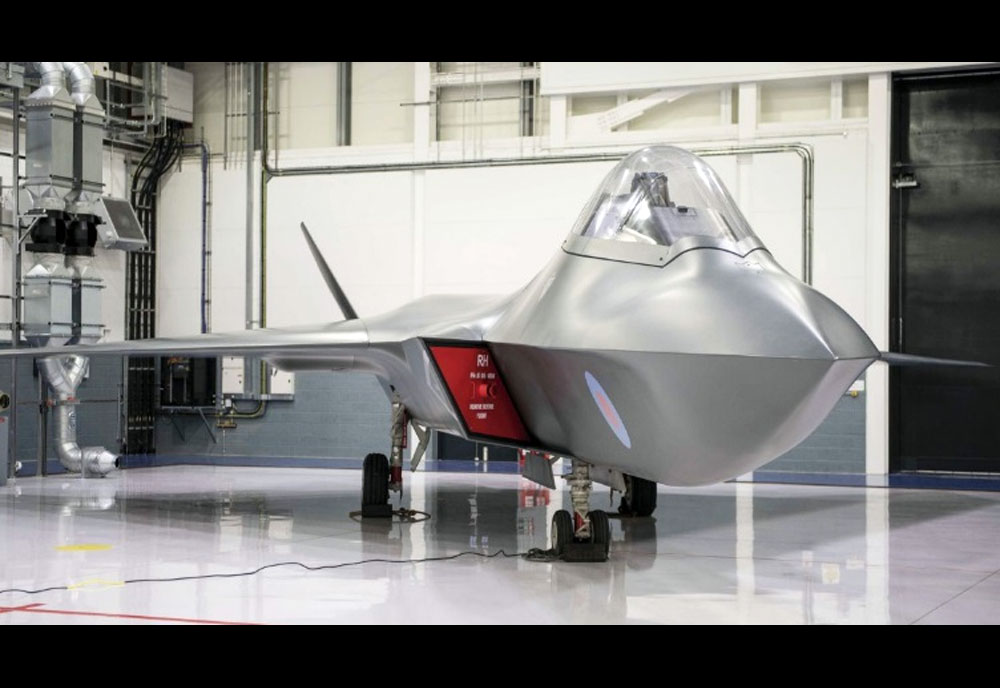 Image from the United Kingdom Ministry of Defence.
6 / 6 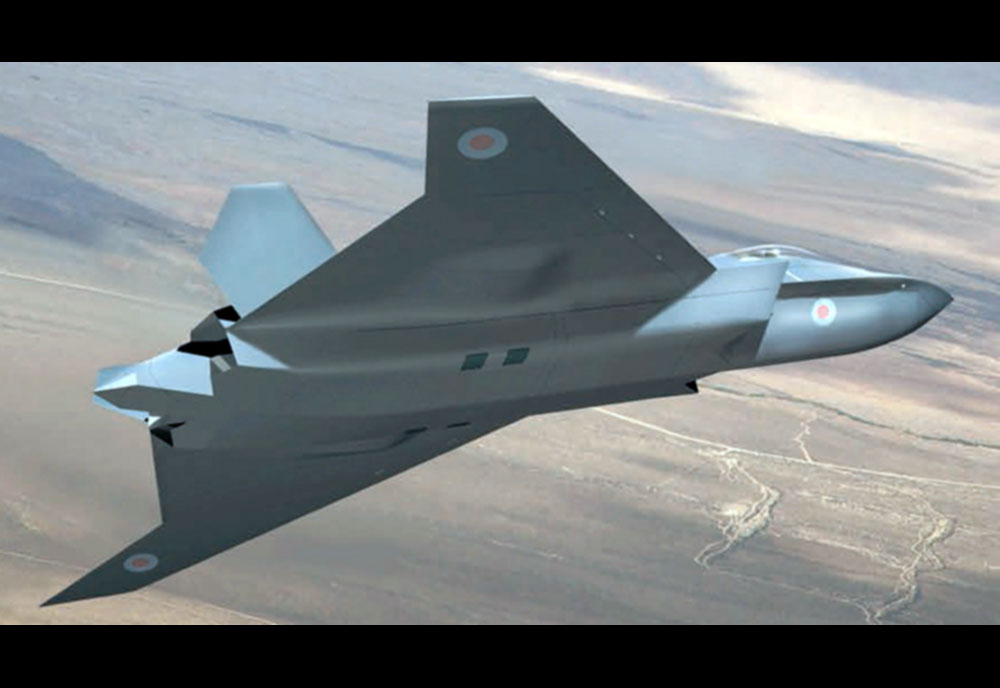 Image from the United Kingdom Ministry of Defence.
❮ ❯

Aviation developments of similar form and function, or related to, the BAe Systems Tempest FCAS...